Last year I had the great opportunity to experience something completely new in the world of ocean cruising when I spent 11 days on a journey around the Mediterranean on the Viking Star – the first vessel in what will eventually be an entire fleet operated by Viking Ocean Cruises. You may be more familiar with Viking thanks to their river cruises not only in Europe, but also around the world, and of course those now iconic commercials many of us grew to love while watching Downton Abbey. Many were skeptical when this river cruise giant took to the high seas, but in their first year they proved everyone wrong not just thanks to the feedback of their passengers, but also to the many awards they have earned. From my own experience, Viking Ocean Cruises forever changed the way I look at cruising and brought me back to the fold of enjoying this style of travel. A few weeks ago I once again joined the Viking Star on a sailing, as it repositioned from New York to the Caribbean, its new home now that the second ship in the Viking fleet has entered the waters of Europe. Looking back at that very brief cruise, I thought I’d share a few aspects of sailing with Viking Ocean Cruises that may not be widely known but really should be. Viking revolutionized the way the world looks at river cruising and they’ve done it again in the competitive world of ocean cruising. This is no mean feat and bears a closer examination.

The folks at Viking don’t like to use the word luxury, but that doesn’t mean their ships and onboard experiences aren’t luxurious, they certainly are. However, it’s a more sophisticated style, more elegant without tassels or gilded everything, instead a quiet sort of luxury. The staterooms are large and accommodating, all food and drinks during meals all included and in fact, there are very few opportunities to spend any money at all. Add to that the beautiful design, outstanding service, delicious food, included tours in every port and it all feels like a luxury travel experience to me. And yet the company really doesn’t like the term, and I agree with them when they explain why. What is luxury? Luxury is a lot of things, it’s those nice finishings but, more often than not, it’s also the intangibles that come together to create a luxurious experience. But calling something a luxury travel experience also sets up certain preconceptions, but more often than not it also keeps some people from approaching the cruises in the first place. They imagine something stuffy and unapproachable, which is not at all what Viking is about. While a luxury product, it’s also an intensely comfortable one. As soon as I stepped back on board the Star it really felt like a homecoming. Everything makes sense, nothing is unnecessary and yet it’s all highly and well designed. It’s a hard feat to pull off actually, but that’s one of many reasons why I called them a game-changer last year.

As a company, whether on rivers or at sea, Viking has an intense focus on the destinations they visit. That’s why there aren’t as many unnecessary distractions onboard the ship; the focus is on the journey. Ultimately, that’s why we all travel and that’s at the heart of Viking, to experience the world in comfort and ease. That’s especially true with Viking’s passengers. I noticed this last year on the river cruises as well, but most of the passengers I met on the Viking Star were extremely well traveled and had a fierce intellectual curiosity. Not unlike me, most of them have a tremendous wanderlust and have spent their lives feeding it whenever they can. Most of the Viking ocean itineraries aren’t like anything else available. They feature ports that most cruise lines don’t or can’t offer, due to size of ship more than anything else, as well as experiences in those ports that are more immersive than anything else offered in the industry. Last year, they changed the way one looks at European cruises and now that the Viking Star is in the Americas, they’re quickly turning the concept of a Caribbean cruise on its head. Instead of the standard 7-night slog to Cancun, Jamaica and so on, Viking spends a little more time on the journey, but that time allows for unique access to ports and islands most cruise lines don’t even visit. Passengers get a more authentic and immersive experience and that, more than anything else, is at the heart of luxury in the 21st century. Personally, I can’t wait to see what other itineraries they continue to add to their repertoire.

No nickel and diming

This is what I loved most about spending time onboard the Viking Star; it’s completely unlike those horrible mainstream cruise ships currently sailing around the world. I do not like being nickel and dimed or feeling like I’m regarded not as a valued passenger, but as a walking ATM. Viking does what the others don’t, they treat their passengers with respect. This comes bounding through by NOT including a casino or an endless array of shops full of overpriced and useless nonsense. The net effect is that there exists onboard a certain level of perpetual peace and harmony, a general sense of elegant relaxation that is completely lacking on those mega-ships. There are a couple of shops, but not many, and instead of pointless casinos Viking installed more areas to relax and mingle as well as the Theater featuring great shows, performances, movies and lectures delivered by subject matter experts. When it comes to extras, there really aren’t many. Wine, beer and soft drinks are always complimentary during meal times and if you want something during off-peak hours, the prices are extremely reasonable. No signing your name every few minutes on a Viking Oceans cruise. You even save money when it comes to excursions; one complimentary excursion is included at every port of call. I love not being bothered when I travel, and Viking take has simply omitted everything I dislike about other cruise lines.

The food experience is not dissimilar from other cruise ships in that there is a variety of light dining options for all meals, as well as a main restaurant for dinner. There are also two premium restaurants available for dinner bookings and a generous tea service offered every afternoon with sandwiches and desserts. But what is different is that every food experience, from a special dinner at the Italian restaurant, to grabbing a snack or even the delicious tea sandwiches, are all included. There are no extra fees for any restaurant or anything you’ll eat onboard. Cafes, special stations – it’s all included and that is where Viking sets itself apart. Of course it helps if the food is actually good, and it is. I’m a picky eater and found great options throughout the day from the room service breakfast, to that fantastic Italian restaurant I mentioned. One area where frequent cruisers will note a big different is what Viking calls the World Café. On a conventional cruise ship, I’d probably call this a buffet, which it sort of is but not really. In a first at sea, almost everything on this “buffet” is made fresh and the entrées are almost entirely made to order à la minute. All that means is that they have several entrée options that instead of being prepared in giant vats and left to dry out under a heat lamp, are made as the guests request them, with a wait usually under a minute. No one else does this, and the ability to have a quick but delicious meal onboard a cruise ship is a luxury unto itself. 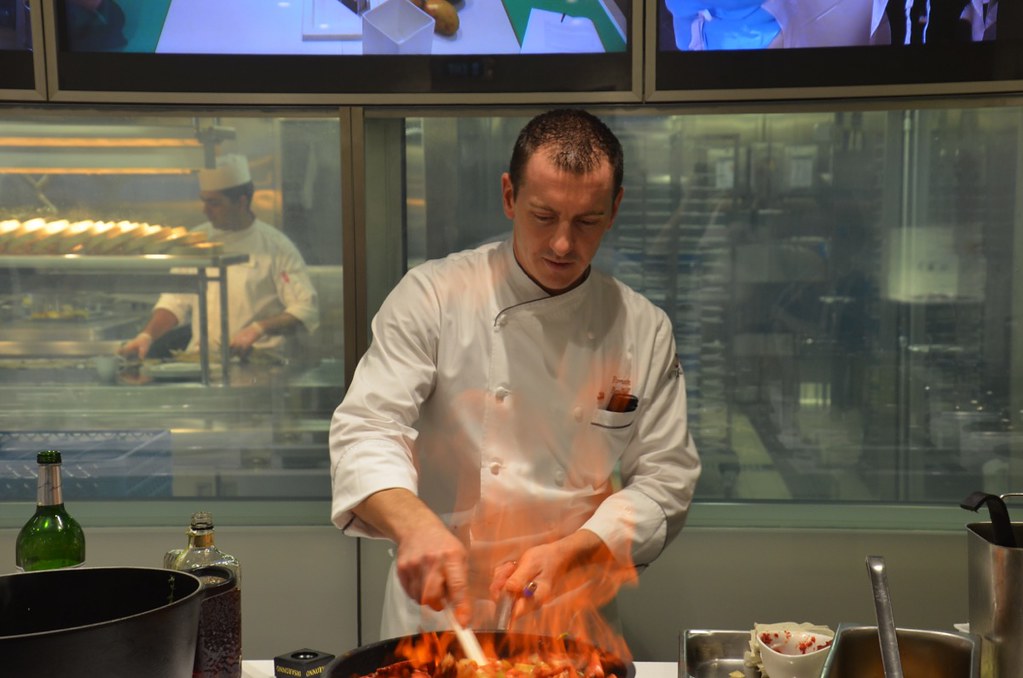 During my most recent voyage on the Star I had the chance to participate in a new activity offered onboard, cooking classes with the ship’s master chefs. This hands-on experience provided a fantastic opportunity to learn how to make a complete dinner using advanced techniques with plenty of tasting along the way. It was a fun way to spend an afternoon at sea and included drinks along with the delicious creations we the students somehow were able to create. This has quickly become a very popular experience, so if you’re interested in participating be sure to sign up as soon as you can.

At the end of the day, a great luxury experience depends not on the thread count of your bed sheets, or on the presentation of your evening meal. No, true luxury always is found in service and hospitality, both of which seem to be at the heart of any Viking experience. Whether it was the cabin steward who took such great care of me during my stay, or the bar manager who quickly remembered that I have a certain fondness for Diet Coke, not once did I find any fault with the service onboard the Star. This is in stark contrast to my experiences onboard the larger cruise ships, where finding good service was difficult and where by the end of the first day, I couldn’t wait to leave. I wasn’t alone in feeling like a valued passenger onboard the Star, everyone I talked to had similar experiences, and when I saw so many passengers taking photos with their favorite waiters, servers or stewards, I knew that Viking Ocean cruises was doing something right. Luxury is when amazing service coincides with great finishings and using that definition, then Viking Oceans is one of the best luxury cruise experiences you’ll ever enjoy.