There are a few things that visitors traveling to Africa on safari want to see and do. Finding the Big Five in the wild is certainly the most popular, but for many the Great Migration is just as important to observe in person. I didn’t fully understand what this amazing natural phenomenon was all about before my trip to Tanzania on a remarkable Abercrombie & Kent safari, but thanks to our expert guide I soon learned a lot about what is ultimately one of the great natural wonders of the world. Whether or not a safari is in your future, this is such an important natural event that I thought I’d share some of the more salient aspects that everyone should know about the Great Migration.

What is the Great Migration?

First of all, it’s important to understand that the Great Migration is an ongoing event and doesn’t really ever end. Simply put, the Great Migration is a circular grazing path determined by the availability of food. An incredible 1.4 million wildebeest and hundreds of thousands of zebra start in the Serengeti in January where they give birth to their young. The grass is still short in this part of the Serengeti, making it safer for the newborns to stay protected from lurking predators. As the rains end, the herds move west following the rivers on their way to the Masai Mara in Kenya. In the summer the herds all arrive into Kenya, crossing crocodile infested rivers to get there. In the late fall and winter, the herds move back towards the Serengeti chasing the rainy season and the process begins again. Really it’s a yearlong search for food, water and safety and there are many opportunities for safari-goers to witness the beauty and drama of the herds along the way.

The major actors on the Great Migration are the wildebeest, more than 1.4 million of them. Those of us of a certain age know these oddly beautiful animals by a different name, the gnu. No matter what you call them, if you join an Abercrombie & Kent Tanzania safari in the first few months of the year, you will see a lot of them. We traveled to the Serengeti in March, at the end of the Great Migration in the region but we were fortunate that the herds hadn’t yet left. Amongst the thousands of adults were just as many babies, most of which were still being weaned from their mothers. But wildebeests are only part of the Great Migration cast of characters, traveling along with them are hundreds of thousands of zebra – the two never really leaving each other, having created a symbiotic bond. Turns out there are reasons for this natural friendship; zebra eat the longer grasses allowing wildebeest the opportunity for the shorter grasses they prefer. Zebra are also helpful in remembering the course of the migration and are smart enough to watch out for hungry river predators. Water is vital though, which is where the wildebeest helps the zebra. They have an incredible sense of smell for water and can find a source almost every day of the Migration. But you’re out on safari, and there are many other animals to see. A number of gazelles make the migration along with the larger herds, but as the herds pass through areas of Tanzania and Kenya, they trample across lands belonging to any number of other animals from elephants to lions to leopards and cheetah, just to name a few.

If you go on safari during the Great Migration, you will see all of the animals you expect to see, in addition to witnessing this incredible natural wonder. 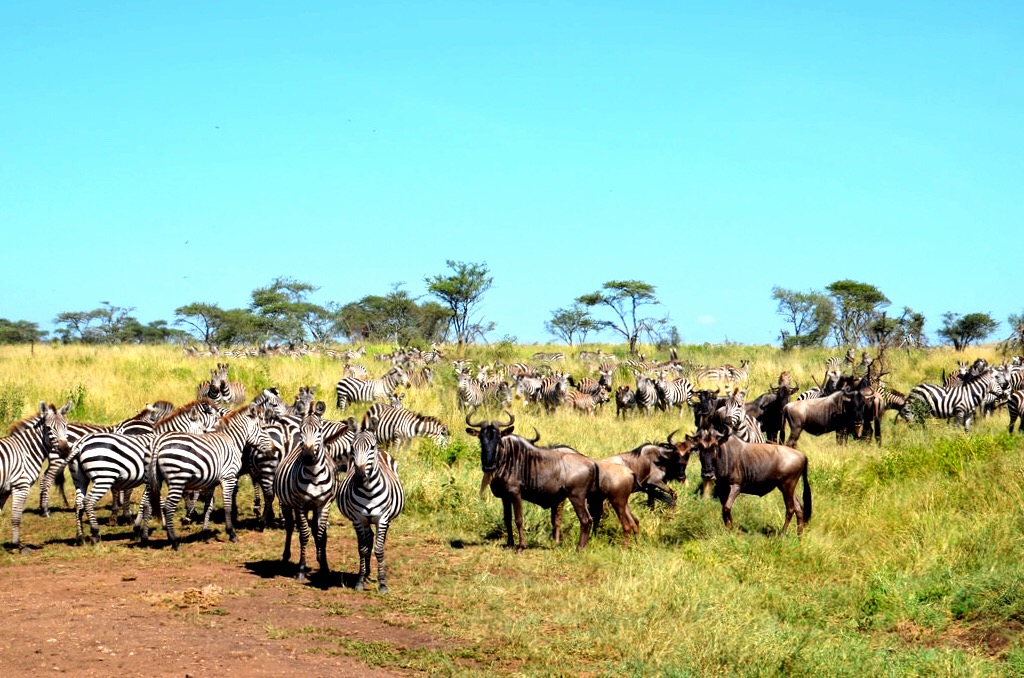 Call it idiotic, but part of me thought that all of the animals migrated together, all at the same time en masse. Clearly given the huge numbers of animals involved, this doesn’t happen and the reality on a safari is different from what you might expect. This is yet another reason why I’m so thankful that we traveled with Abercrombie & Kent around Tanzania. They created the modern concept of luxury safari and their more than 50 years of experience on the ground means that the guides who ushered us around know the country better than anyone else. In practical terms, this level of expertise meant we were able to see wildlife at almost every turn. The most obvious way you’ll see the Great Migration is from a safari truck. As we explored the various national parks of Tanzania, there were many moments when we saw large herds of wildebeest and zebra, grazing and ambling around, looking for the next great meal. It wasn’t until we arrived to the Serengeti though that I began to understand the massive scale of the Great Migration itself. Almost immediately our truck was forced to stop as hundreds, if not thousands, of animals ran across the road in front of us, on a primal need to move and eat. It was amazing to witness this ancient movement of animals in person, to see the basic instinct that has propelled them around the grasslands for millennia. I sort of “got” the Great Migration at that moment, but it wasn’t until I saw it from the air that it all started to sink in.

One of the best travel experiences of my life, taking a hot air balloon ride across the Serengeti as the sun rose was a singularly amazing moment in my life. We saw everything from elephants to lions and plenty of hippos, but it wasn’t until the end of the ride that the most amazing moment happened. Below us were massive herds of zebra and wildebeest, already starting their migration out of the Serengeti, eating everything they could in the process. The gentle whoosh of the hot air balloon startled them, causing them to scamper in every direction but also providing an incredible visual creating what I had imagined the Great Migration to be like. I understood then and there why so many people travel to Tanzania to see this natural wonder and why ultimately it had been on my travel bucket list for so very long. 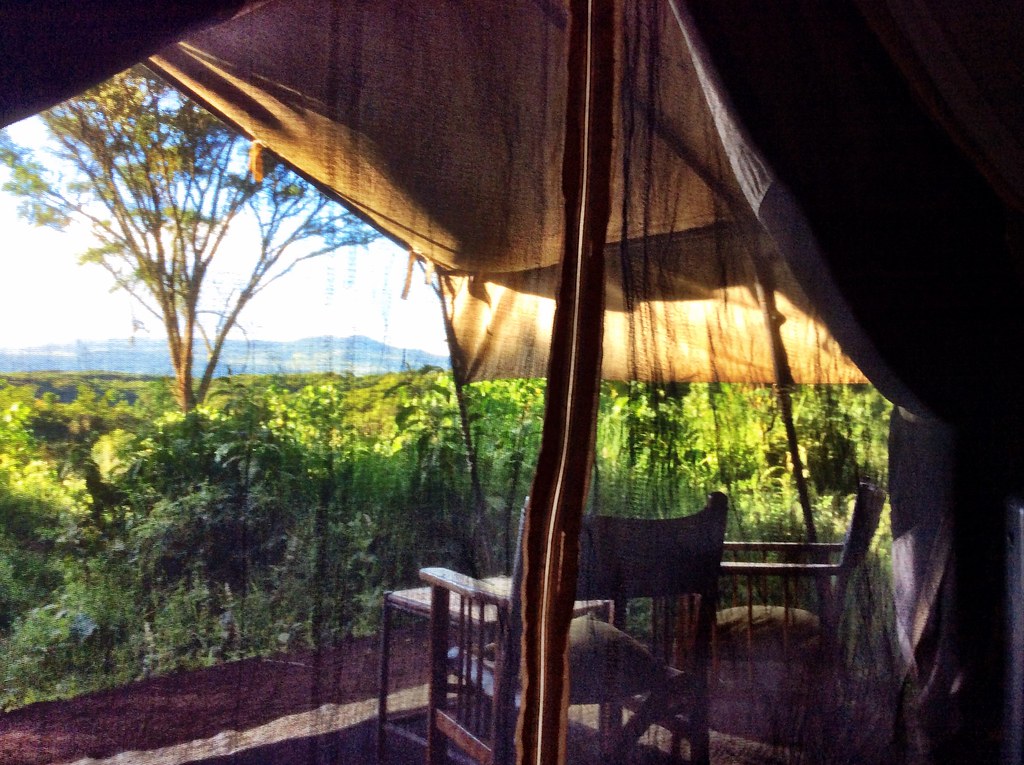 An important aspect of any great safari experience is where you spend the night. So much more than just a place to lay your head, tented camps and lodges are I think an integral part of safari. Since we traveled with Abercrombie & Kent, we mostly stayed at the luxurious Sanctuary Retreats tented camps; remarkable properties located in some of the most remote and beautiful parts of Tanzania. They also make the ideal base from which to explore the wildlife of the country and of course see the Great Migration. Sanctuary Retreats also has a special mobile-tented camp devoted entirely to the Great Migration, which moves as the herds move transitioning from the Western to the Northern and finally the Southern part of the Serengeti. My experience was a little different though, while in the Serengeti I called the permanent tented camp Sanctuary Kusini home, and for me it honestly was the best way to access the grasslands and wildlife of the mighty Serengeti. For a more classic hotel experience, the Four Seasons Serengeti also quickly became a personal favorite, combining the great qualities I love in any Four Seasons property with remarkable access to the wildlife of the Serengeti. Wherever you stay while on safari, don’t underestimate the importance of a great lodge or camp in your overall Great Migration experience.

Safari is about more than the Great Migration

Just as I tell people not to go on safari just to see the Big Five, the same holds true for the Great Migration. It’s a little hypocritical I realize, since I listed the Great Migration on my own personal 40 Before 40 list, but I was wrong. Instead of traveling to Tanzania just to witness what is admittedly a natural wonder, consider that a bonus to the overall experience of a great luxury African safari. Every single aspect of my trip with Abercrombie & Kent was special, from the drives themselves to those very precious moments of witnessing some of the world’s most beautiful animals in their native environment and not mine. Safari is transformative for any number of reasons, but mostly I think because it humbles us. It demonstrates to us the raw power of nature along with its resiliency. The Great Migration has been ongoing for longer than any of us realize, and the animals that call the Serengeti home put us in our place. They teach us how fleeting our own lives are, how inconsequential our problems are when put in the larger context of the world and how slow time really moves. Safari is remarkable, but it’s also important. It’s important for everyone to have their own private safari moments and to experience the true power of a transformative travel experience and how it can change us at a very profound level.

2 thoughts on “The Great Migration in Tanzania: 5 Things You Should Know”