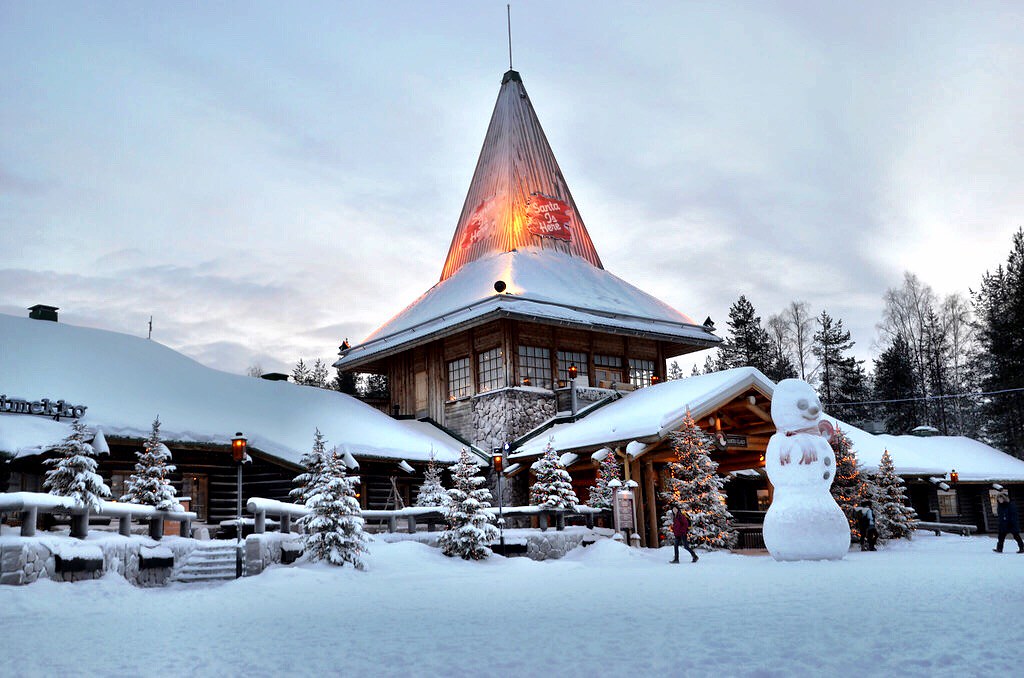 “So, would you like to meet Santa Claus,” was probably one of the most unlikely welcomes to a new place I had ever heard, but in Rovaniemi, Finland it’s practically printed on the license plates. The unofficial capital of Finnish Lapland is known as the gateway to this rough and tumble part of the world. It’s from here where adventurers trek even farther north in search of the Northern Lights and remote natural retreats known only to a few. It’s from Rovaniemi that thousands come every year to try their hand at guiding a team of Alaskan Huskies through the wilds around town, or go snowmobiling in -30 degree temperatures over frozen bogs and through tranquil forests. But for all of these amazing activities all designed to introduce the visitor to the beauty of Finland’s natural retreats, that’s not the real reason why most people take the easy 1-hour flight from Helsinki every day. No, they come for one reason and one reason only – to meet Santa Claus in Santa Claus Village. 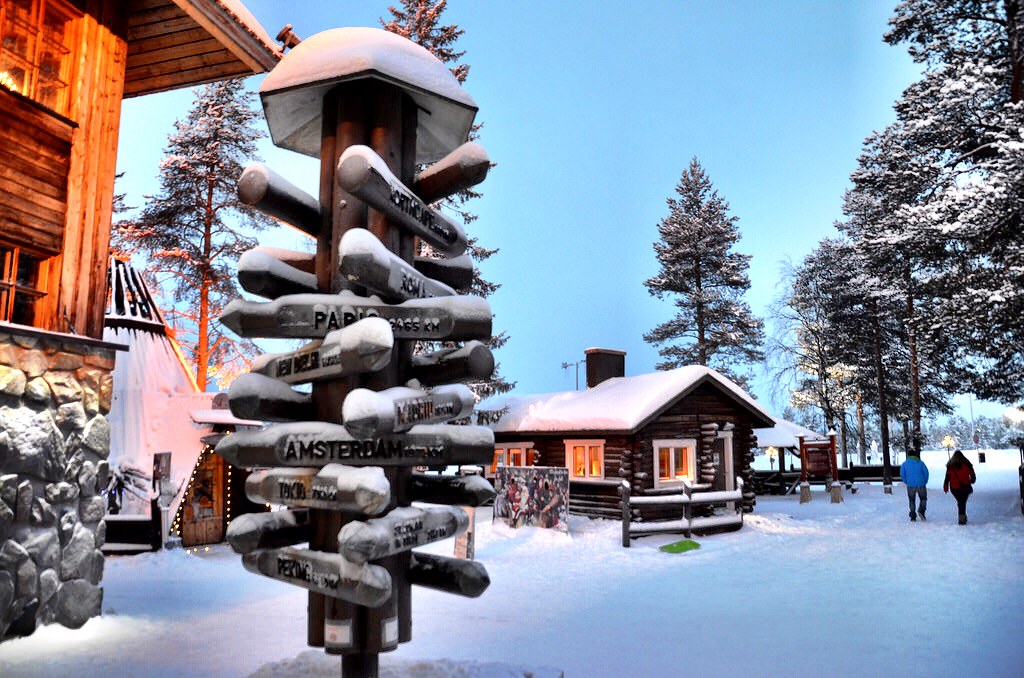 How It All Started

Santa Claus Village had an unlikely start. In June 1950, Eleanor Roosevelt visited Finland as a representative of the United Nations to see firsthand how post-war rebuilding efforts were progressing. Part of her tour included a stop in Rovaniemi, which had been completely destroyed by the Germans as a result of their scorched earth policy. In an effort to impress the UN official and former First Lady of the United States, regional officials hastily built what was called the Polar Circle Cabin.

Choosing a spot where they thought the Arctic Circle crossed, the cabin was built in a week and was the first attempt to create an attraction in this part of Finland. At the cabin, guests would be able to buy a hot cup of coffee and send a postcard from the newly established post office, thus being able to say that they mailed a letter or postcard from the Arctic Circle itself.

I did some research and found Eleanor Roosevelt’s diary entry from that day, which went into great detail about her visit to Rovaniemi. In it she recalled visiting the small log cabin that contained one room for the office and another for a little kitchen. She wrote “It had been opened for our coming so that I might mail the first letter home from the Arctic Circle. This I addressed to the President of the United States.”

It was an auspicious start and over the decades the cabin grew into the site it is today – an entire village where Christmas never ends. The link to Santa Claus is a little more obscure, but according to local lore Santa’s true home is located at a mysterious site in Finnish Lapland called Ear Mountain. Rovaniemi is merely the public face for Santa Claus so that he may keep his secret lair well hidden.

Let’s be clear about it, Santa Claus village is technically listed as an amusement park. It is by far the most popular tourist activity in town and hundreds of thousands visit every year to capture the Christmas spirit and of course to meet Santa Claus himself. But it’s not your typical overly hyped attraction and I quickly found myself falling for it. There are no admission fees; anyone can wander in and out as they please. Over the years plenty of activities and experiences have been created, from an Ice Hotel to riding a reindeer driven sleigh. There are two key experiences though that every visitor, no matter their background or general interest, feels compelled to try: Meeting Santa Claus and visiting his very own post office.

Walking up the stairs in the large log building, I couldn’t help but be drawn into the over-the-top decor that serves as Santa Claus’ house and workshop. Every attempt has been made to make this event really feel like an event, and I couldn’t help but feel a little excited as the elf opened the door to Santa Claus’ office itself. And there he was, Santa looking just like he should. Slightly rotund, full white beard and a broad smile on his face – this was indeed Santa. Suddenly I was 5-years old again, and too shy to even say a word. He must be used to this reaction because he waved me over and patted the chair next to him, clearly wanting me to have a seat. And so I did and almost immediately he drew me in to a conversation, asking about me, where I live, what I was planning to do in Finland. He approved of my travel plans and laughed as I complained about the bitterly cold temperatures. He had a knack of completely ridding me of any apprehension I may have had and I soon found myself laughing along with him, completely and totally having bought into the situation. For those few moments I WAS talking with Santa Claus and the feeling was more heart-warming than this jaded blogger could ever have thought possible.

Visiting Santa Claus is free of charge, but if you want a copy of the photos taken with him there are associated charges. Just like the overall Santa Claus Village experience itself though, there’s no high-pressured sales tactics, instead it’s all pretty laissez-faire, a nice departure from the normal touristy-site experience. Santa Claus Village does indeed sit on the Arctic Circle, just as its founders had intended. Giant markers indicate where the line actually crosses the Village, and taking pictures along the Arctic Circle may be even more popular than visiting Santa Claus himself. But there really isn’t denying what is by far the most popular thing to do at the Village, mailing a letter from Santa Claus’ Post Office astride the Arctic Circle. 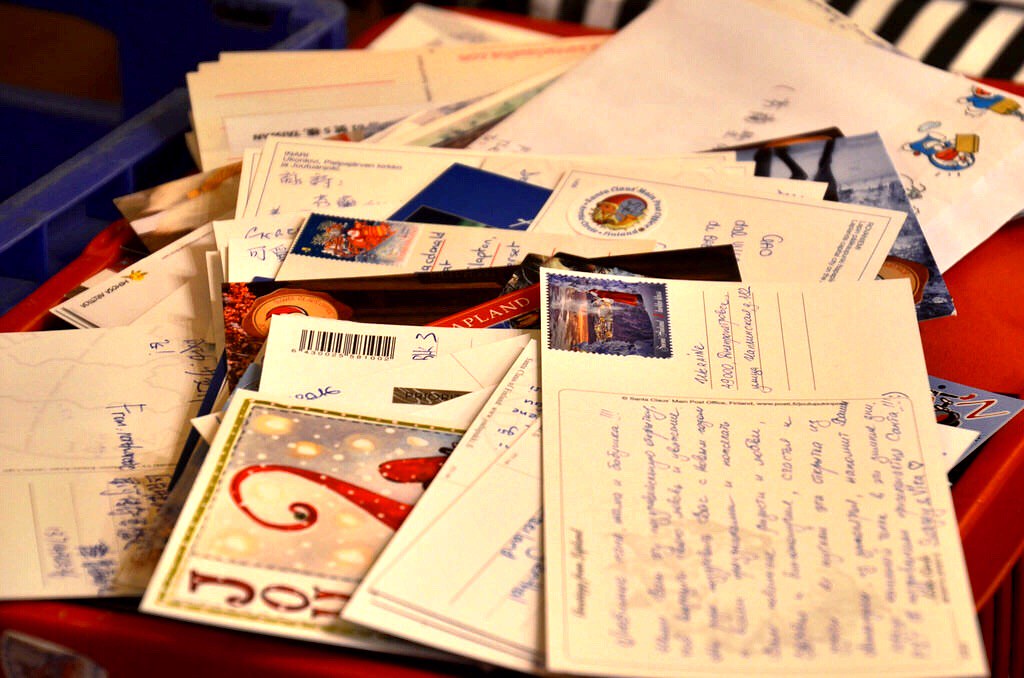 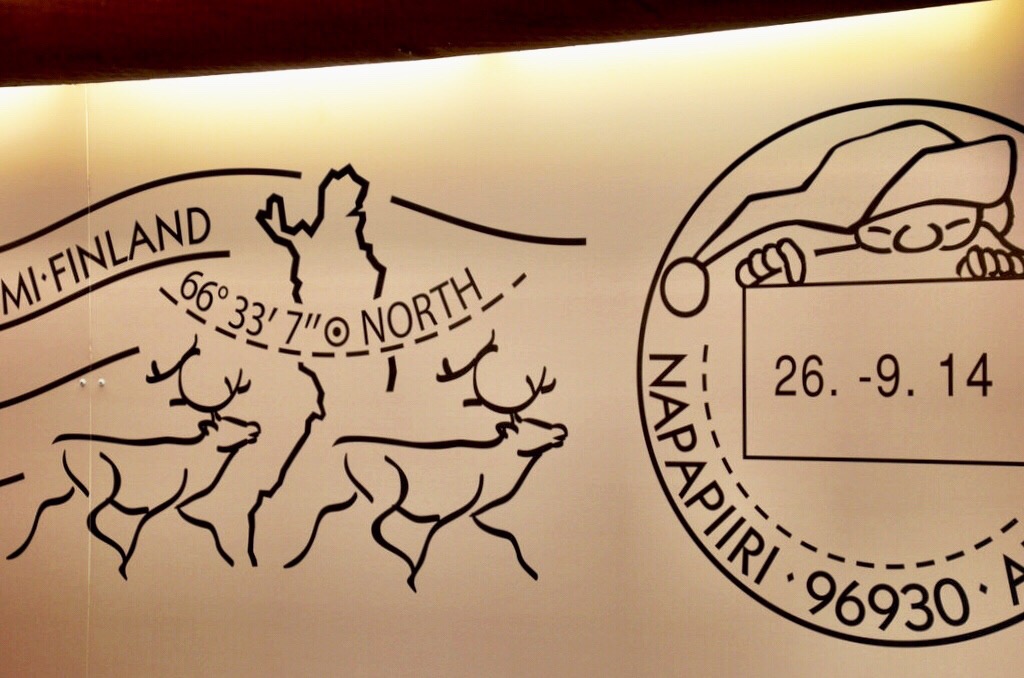 This is no fake post office though, it’s a part of Finland’s official postal service network and those smiling elves manning it are actually postal service employees. The Santa Claus Main Post Office is the only designated post office for Santa in the world and has its own special postmark, along with custom stamps to go with it. Since 1985, the post office has received around 16 million letters to Santa. During the past few years, Santa has received more than 500,000 letters every year from 200 different countries. Every year about half a million people visit the post office, which is open every day of the year. Walking around the compact cabin, I scanned the crowd and listened to the languages spoken, identifying at least a dozen different nationalities represented that chilly January afternoon. I soon fell into the spirit and before I knew it, I was addressing my own postcards to friends and family back home, all with that iconic stamp.

Sometimes Touristy Can Be Fun

Santa Claus Village ranks high on the list of the VERY touristy activities I’ve done during my travels, but that’s not necessarily a bad thing. Fabricated entirely for the tourist trade, this wouldn’t have been my normal first stop but given its popularity, I knew I had to visit. People come literally from every corner of the earth to spend the day in the Village, and I wanted to find out why – and I think I did. With the ground blanketed by newly fallen snow and the air graced by the sounds of Christmas carols and the whinnies of reindeer, almost immediately I found myself falling back into the Christmas spirit. I love Christmas for that special feeling of joy and family, and all of that came rushing back to me as I walked around Santa Claus Village. The experience was also just fun, plain and simple. It’s like going to see a movie, suspending my disbelief and instead allowing myself to be wowed by the experience. I put aside my sarcastic comments and jaded worldview and instead invited Santa and his elves to impress me, which they certainly did.

Rovaniemi has a lot to offer and as the capital of Finnish Lapland, is the perfect starting point to explore the rich natural resources of the region. But when we travel it’s also about the local culture, learning more about it and in Rovaniemi that just happens to mean that a visit to the Santa Claus Village should be at the top of everyone’s travel to-do list.

3 thoughts on “Santa Claus Village: Why Meeting Santa in Finland Was More Fun Than I Thought”