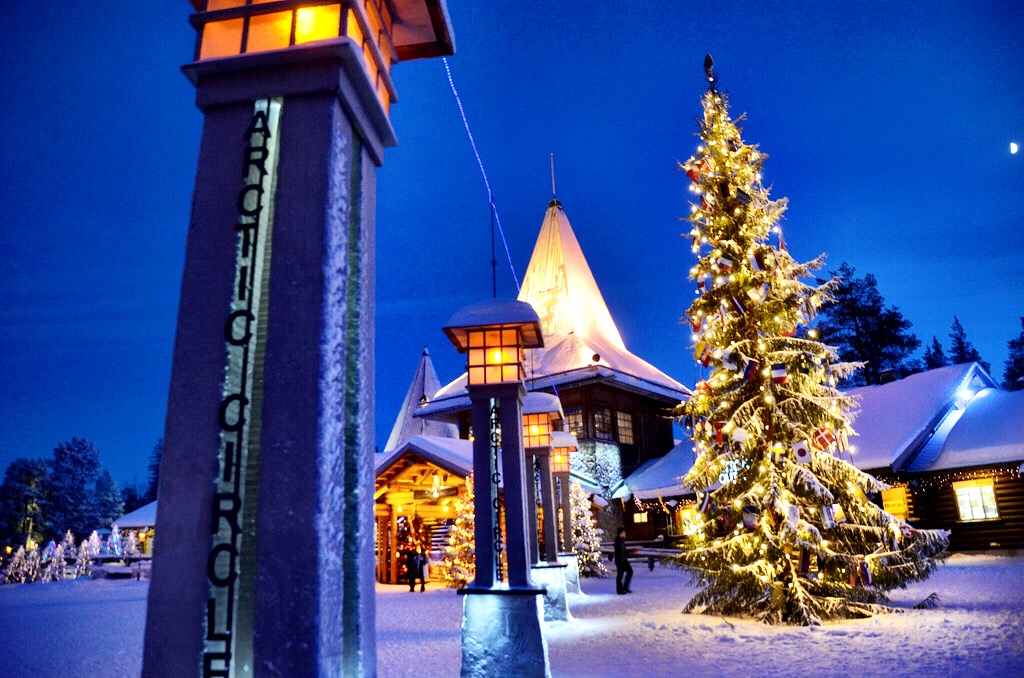 The largest region of Finland is also its most rugged, wild and in my opinion the most interesting. Lapland is a sparsely populated Arctic playground known for reindeer, virgin forests and at least one famous resident. Spending a few days exploring this beautiful part of Finland in the middle of winter was a special travel experience in its own right, but these activities took that simple trip and transformed it into something special. Here are a few must-do experiences when you explore Finnish Lapland.

It’s impossible to visit Rovaniemi, the de facto capital of Finnish Lapland, and not realize immediately that it is the hometown of Santa Claus. From the airport when you first arrive to even hotels bearing his name, this town is all about Santa. Literally straddling the Arctic Circle, Santa Claus Village is a 365-day Christmas extravaganza; a place where the holiday spirit is alive every day of the year. It all started with an unlikely visit by Eleanor Roosevelt, who visited Rovaniemi to see the progress of Marshall Plan projects. For her arrival a small cabin was built, a cabin that soon became the center of this tourist hotspot. And it is definitely touristy, no doubt there, but it’s also unexpectedly fun. Walking into the middle of the village, it was only 3:30pm but the winter sun had already begun to set and soon I found myself in the middle of the village, night having fallen and the sound of carols in the air. Christmas had already been over for a couple of weeks and while the rest of the world was dealing with the January doldrums, Santa Claus Village really did feel cheerful. I felt as if Christmas was just around the corner and that yuletide excitement came rushing back. Of course the focal point of any visit is meeting Santa Claus, who is always ready to greet new visitors. The visit with Santa is free of charge, but the photos taken come with a small fee. After chatting with Santa – everyone gets some alone time – head to one of the most popular post offices in the world, Santa Claus’ Main Post Office. This real post office on the Arctic Circle handles all of Santa’s worldwide mail traffic and since 1985, more than 17 million letters have been sent to the post office all addressed to Santa from nearly every corner of the world. It’s not everyday you can send a Santa Claus postmarked letter, so I sent a few postcards and thought about my experience in the Santa Claus Village. I’m not normally a fan of hokey tourist experiences, but this one was fun – a lot of fun actually and I quickly understood why hundreds of thousands of people make the trek to the Village every year. The Christmas spirit is a special feeling, and this is the only place in the world where it never ends.

As the owner of Siberian Huskies and a dog lover in general, anytime I get to interact with new furry friends when I travel is something I not only enjoy, I crave it. So when I learned about the overnight husky trek with Bear Hill Husky in Rovaniemi, I knew I couldn’t say no. The only hindrance was the weather. Negative thirty is extreme even for northern Finland, so the overnight plans were scratched and in its place an afternoon was planned with the huskies; a change in plans that turned out to be even better than the original tour. Meeting with the sled dogs before the ride through the quiet woods surrounding Rovaniemi, I quickly fell in love with my new furry friends. Working dogs aren’t like our furry pets, they’re trained to do a job and all of these pups were buzzing with anticipation for the ride ahead. Taking off with a team of 6 into the heart of the virginal woods, not for the first time I thought just how special an experience riding with sled dogs really is. Almost immediately all other noises die away and the only sounds are the panting of the dogs and the sled itself as it skids along the snow and ice. It’s a communion of sorts between man and dog and offers an introduction to some of the most remote areas of Finland that would be impossible to experience otherwise. Although the all-day ride was scrapped, we still managed to do the overnight portion – a stay in a remote cabin in the middle of nowhere. No electricity or running water, it’s not my normal type of overnight accommodation, but the small wood-fired sauna and the amazing friendships I made more than made up for a lack of room service.

Reminding me a lot of the small town featured in the TV show Northern Exposure, Rovaniemi is a quirky but fun place to spend a few days. Completely destroyed (almost) during WWII, the town has known its struggles throughout the years, but what they have created is honestly nothing sort of remarkable. Part of that comes from their good humor (the new city plan after the War was designed to look like a reindeer head) but also for their fierce love of Finnish Lapland, which can perhaps be best seen at the fantastic museum – Arktikum. An unusual design, its main feature is a long and narrow glass tube built into the ground, meant to represent the gateway to the north that has come to define the town. The museum itself is split into two sections, one dealing the culture and history of Arctic Lapland and the other sharing the science behind life in the Arctic, from the wildlife who call it home to the Northern Lights that are so common. I’m picky when it comes to museums, but the Arktikum was well curated, the information was interesting and the design of the building itself so unique that I couldn’t help but be drawn further in.

Rovaniemi may feel remote to some, but it’s the largest town in Lapland and this enormous region is dotted with far smaller villages and towns, like Ranua. An easy drive from Rovaniemi, Ranua is best known for its zoo, a wildlife park of arctic animal species that is the northernmost zoo in the world. I wasn’t there for the wildlife though; I was there for the snowmobile experience of a lifetime. As I wrote a few paragraphs above, temperatures approaching -30 are not to be taken lightly, and suiting up in what was 6 layers of clothes was just the start of my afternoon roaring across the frozen bogs and woodland trails surrounding Ranua. Once the snowmobiles started flying, the temperature felt more like -40 and even with all of those layers, my hands and feet were quickly freezing. It was all worth it though for the amazing scenery and untouched landscapes that make Finnish Lapland so very special. The sun isn’t out for long in the winter, and the late afternoon light (around 2pm) turned out to be the perfect condition for my first introduction to this part of the world. The experience was fun, sure, but it was also a special one. Turning off the impressive machines and just looking out across the frozen landscapes, I felt as if I was the last person in the world, an all too rare feeling.