Amsterdam is fine, don’t get me wrong. Even though I spent a long time not liking it, my most recent trip there mostly helped me change my mind about the city. Is it a place where I would visit dozens of times? No, but I mostly enjoy being there, which is a quantum shift from my old thoughts about the city. That being said, most visitors to the Netherlands either by design or not will only visit Amsterdam. While not huge, there is a lot more to Holland though than its capital; towns and cities I was fortunate enough to visit last December before joining a Viking River Cruise trip along the Rhine, starting out in Amsterdam. Taking a couple of days before the cruise to further explore the country was a great decision, and helped me better understand why people enjoy visiting as much as they do, especially these four cities in Holland.

I don’t know if it’s an official moniker or anything, but I call Rotterdam the capital of cool. Not in that Berlin, hipster way but thanks almost entirely to the city’s attitude and of course its architecture. Rotterdam was almost entirely destroyed during WWII, which gave city leaders an opportunity to reshape their community, which they fully embraced. Following the war, many other European cities decided to rebuild in the old style, but not Rotterdam. No, instead Rotterdam has and continues to embrace avant-garde architecture that is simultaneously bizarre at times, but also undeniably beautiful. One of the best places to get an idea of this radical architecture is by standing in front of Rotterdam’s new Market Hall. Opened in 2014, this modern landmark is the largest market hall in the Netherlands and certainly one of the prettiest. I knew I’d enjoy visiting, but I had no idea the actual experience would be as much fun as it was. Inside 4,000 steel tiles line the quirky space, an artwork called the Horn of Plenty and which many say is the largest piece of art in the world. Nearby the Market Hall though is another icon of Rotterdam’s architecture, the Cube Houses. Built in 1984, the Cube Houses are a series of 39 small homes tilted 45 degrees. The architect, Piet Blom, meant to represent a tree and together, the houses make up an urban forest. Representative of the era, he wanted this to be a small, communal village, located in the heart of the urban center of Rotterdam. They’re meant to be a haven, a safe place where anything is possible. Rotterdam is fun, quirky and completely unlike any other Dutch city, making it a must-include stop when you visit the country. 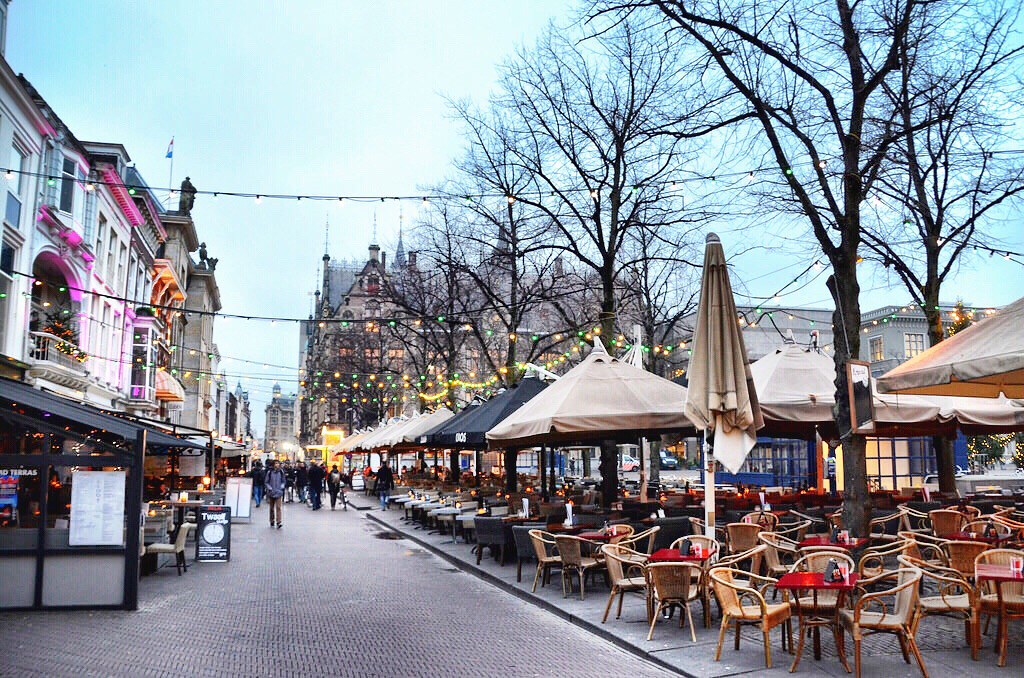 It wasn’t until I stepped off the train in The Hague that I realized what Rotterdam lacks. It’s missing that Old World appeal that draw people like me to Europe in the first place. As I learned, that’s because The Hague has cornered the market in history and Old World charm. Just to be confusing, Amsterdam is the capital of the Netherlands, but The Hague is the seat of government. Yeah, weird I know, but almost immediately I got a sense of the political undercurrent in the air. Maybe it’s from my own years working in politics, but political towns act differently than other places. They tend to be a little more button-down, more traditional and definitely in a greater hurry than other non-politically focused cities. Those are all great ways to describe The Hague, but it doesn’t end there. Thanks to a sizable university population, there’s also a vivaciousness that counteracts the political nature of the city creating something all together different, something lovely to experience. I didn’t spend a lot of time in The Hague, I was curious just to see it more than anything else. But what I saw I loved and quickly vowed to make a return visit when I have the opportunity. It’s a city that appealed to me right away, a feeling I love and have learned to respect over the years. Not all places click with us on a personal level, and I’m eager to return to The Hague to find out exactly what it is that made me smile as I walked around its downtown core.

I have to be honest; the only reason why I visited Dordrecht was because of its famous Christmas market. Reputed to be the largest in Holland, it lasts for just one weekend a year and since I happened to be close by for the 2015 event, I couldn’t stay away. Every year I travel to different places around Europe to experience their Christmas markets, and the regional differences are what have me returning year after year. Each country, region and even city has its own variation and no two are alike. Markets also highlight the local culture, which is why I found myself enjoying not just Dordrecht’s famous market, but also the city itself. Right away I knew that the statistics were right, the Dordrecht Christmas market is indeed huge, encompassing most of the downtown overflowing onto streets and alleyways in every direction. It’s almost too much to take in at once, but spending a few hours walking around, trying new delicacies and listening to Christmas carols, I found myself not only enjoying the market, but enjoying the city much more. Even though I didn’t know it at the time, Dordrecht is the oldest city in the Holland area and its rich culture and history really does tell the story of the Netherlands. Enjoying a strategic location, it became important early on, trading created wealth that can still be seen today. Important moments also took place here, from the first step towards a free and independent Dutch Republic to religious reform in the 17th century. While its importance has certainly waned since the heyday of the Middle Ages, the architecture and culture all are great clues to this lofty past, making it a beautiful city to explore whether or not the Christmas market is around.

My Dutch friends will probably criticize me for adding this to the list, but I’m not writing this post for them. The first stop on my Viking River Cruise along the Rhine River was to the admittedly touristy, but also iconic and interesting, Kinderdijk. When we think of Holland most of us think of wooden shoes, cheese and windmills. Traditional windmills are increasingly hard to find in the Netherlands, which is why Kinderdijk is such a popular tourist attraction. A UNESCO World Heritage Site, the 19 windmills built here are the largest concentration of old windmills still existing in the Netherlands today and the best place to learn more about this popular Dutch symbol. Tours are led by local docents, volunteers who take on the duty out of love for these precious ties to the past. Walking around with our docent, it was interesting to learn of the importance of these windmills in the history of the Netherlands. They drained the swampy lands of the Low Country, making it possible not just to use the land, but to avoid seasonal flooding that defined the country for so long. Understanding and taking control of the water is what led to the incredible success of the Netherlands throughout the centuries, transforming it from a swampy country to one of incredible wealth and power. None of that would have happened without these still-beautiful windmills.

My experience traveling around the Netherlands was limited, but of the places I visited and the experiences I enjoyed, these are the four cities in Holland outside of Amsterdam I think everyone should visit. What else would you add to the list?