Before joining my Viking River ship for the Rhine River cruise experience, my partner and I decided to arrive a couple of days early to adjust to the time and to do some exploration. If given the chance to go somewhere new, I will always say yes and that’s how I found myself spending a couple of days in one of Europe’s most talked about cities, Rotterdam in the Netherlands. While I’d of course heard of Rotterdam for a long time, it wasn’t until I was at home a few months ago, watching an episode of The Amazing Race that I thought I might really want to visit. The images and scenery shown on the show didn’t just look beautiful, but so unusual that I knew I had to one day see them for myself. And that’s how we found ourselves in Rotterdam, a city we enjoyed a lot but not for the normal reasons. While the typical tourist activities were great, and I will devote a post to them soon, it was what I experienced as I strolled through town that amazed and impressed me the most. It was the unique feeling of Rotterdam, its ability to surprise and impress in a way completely different from most other cities I’ve visited in Europe that captivated me the most. To help convey what the experience was like, I decided to share a series of images here in order to demonstrate just how unusual a city Rotterdam is and what makes it so very special.

In May 1940, a German bombardment destroyed almost the entire city center of Rotterdam, leveling thousands of homes, business and important sites and forever changing the city. This isn’t an unusual or atypical story on the European continent, but what is somewhat unusual is how Rotterdam decided to rebuild. Unlike so many other cities around Europe, Rotterdam decided not just to recreate what had been lost, but to break with the past and design an entirely new city. It’s a rare opportunity and today, looking back through the decades it’s easy to see how the residents of Rotterdam made full use of this chance to create a new place to call home. 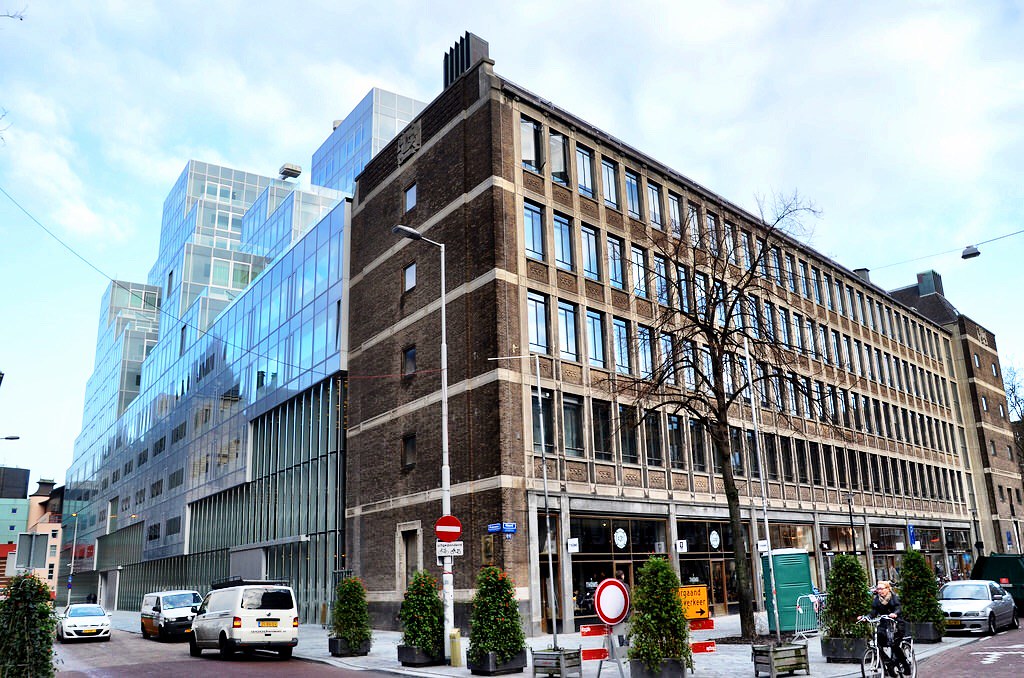 Walking through Rotterdam is a different experience than walking around almost any other European city. While part of me lamented the lack of Euro-charm – ancient cathedrals and churches, 200-year old cafes, and so on – part of me fell in love almost immediately with the daring design and architecture of the city, which I first got a better understanding of by visiting the city’s observation tower, Euromast. Many European cities have some sort of tower like this and I for one seek them out, because one of my cardinal rules of travel and photography is to get up as high as possible to see things in a different way.

Standing at 100 meters, the Euromast was built in 1960 and still today is a popular tourist attraction. That’s thanks to the 360-degree view of Rotterdam and the surrounding areas providing visitors like me a fantastic view, especially on an unusually sunny December morning. I’m a visual learner, so it was great to match up the map with reality and to mentally plot the rest of my day experiencing the city and also getting to know the look and feel of it as well. 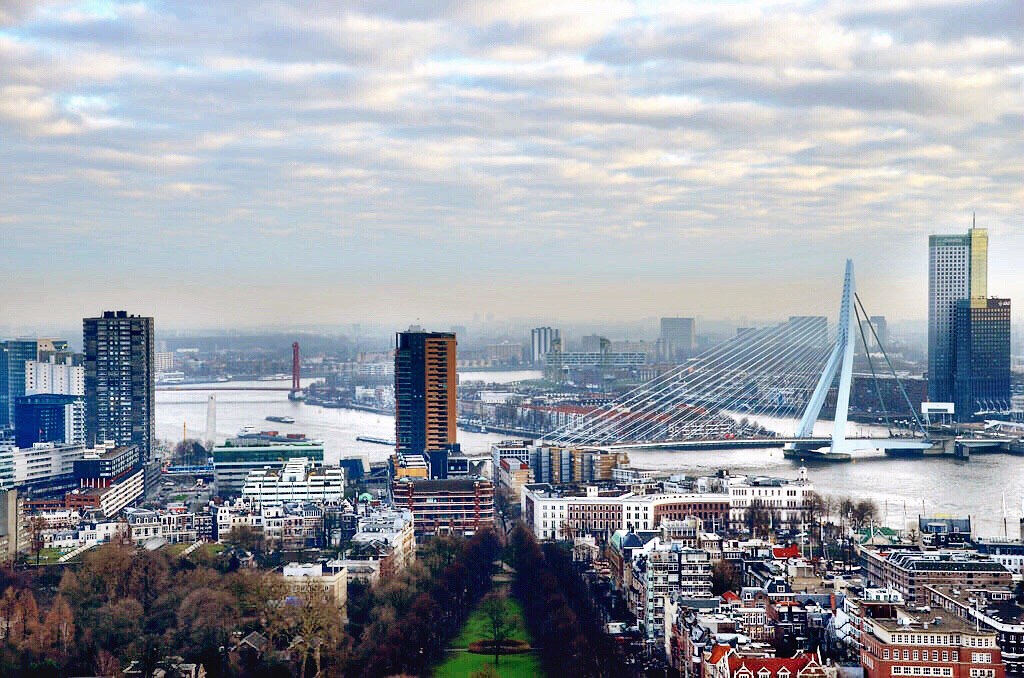 Rotterdam’s Reconstruction era was all about embracing modern ideas of work-life balance; defining zones for each activity and creating a city that was livable, instead of the cobbled together streets and alleys of Old Europe. It was a fresh start, a bright light after a long and brutal war and it’s a feeling, a sensation that’s still not just respected, but embraced today. I saw that well evidenced in the even more modern structures around town, including one of the newest and definitely most famous, the Markthal or Market Hall. Opened in 2014, this modern landmark is the largest market hall in the Netherlands and certainly one of the prettiest. I knew I’d enjoy visiting, but I had no idea the actual experience would be as much fun as it was. Inside 4,000 steel tiles line the quirky space, an artwork called the Horn of Plenty and which many say is the largest piece of art in the world. Walking around, the stands are a nice mix of fresh foods and prepared meals with a little bit of everything from sandwiches made with the freshest ingredients to French style bakeries and everything in between. My visit to the Markthal quickly became the highlight of a day with many great moments and is a place I hope to return to soon, to try some more of the delicious foods if not to simply admire this beautiful example of modern architecture and design. 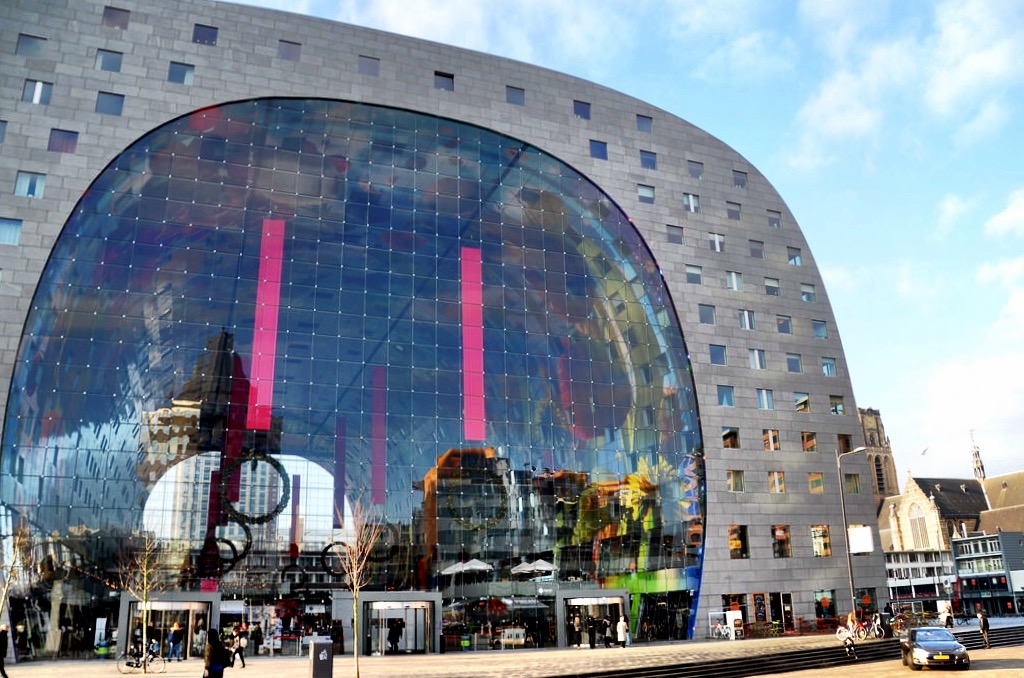 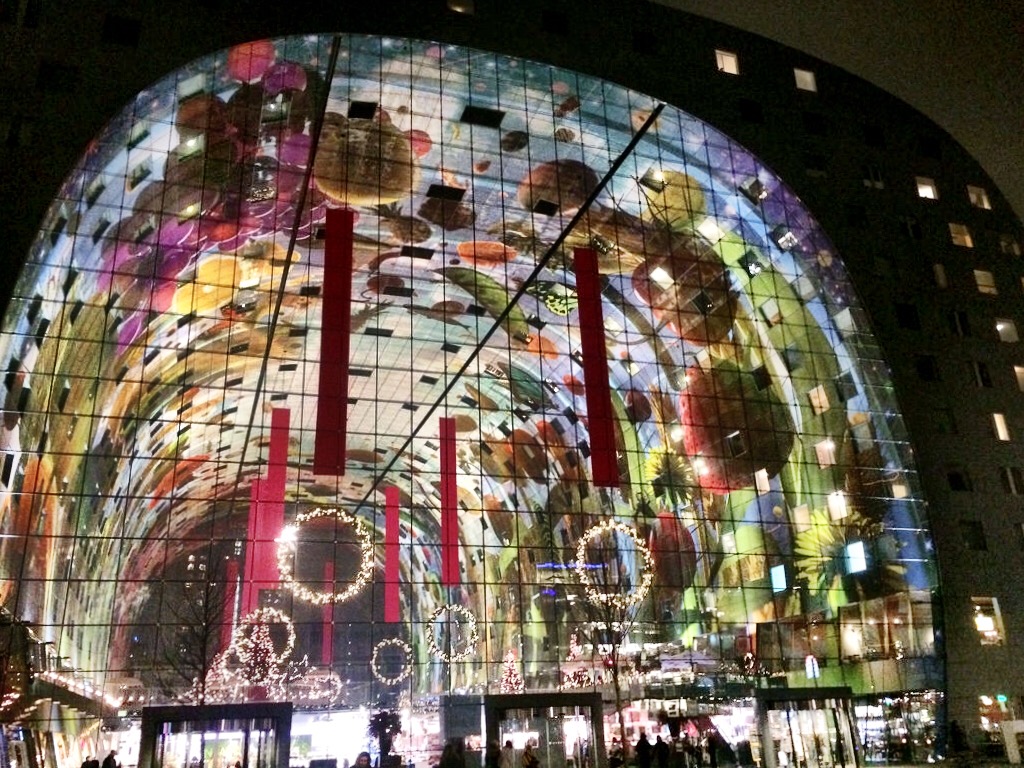 Across the street from the Markthal is another iconic Rotterdam monument to modern design – the Cube Houses. Built in 1984, the Cube Houses are a series of 39 small homes tilted 45 degrees. The architect, Piet Blom, meant to represent a tree and together, the houses make up an urban forest. Representative of the era, he wanted this to be a small, communal village, located in the heart of the urban center of Rotterdam. They’re meant to be a haven, a safe place where anything is possible. 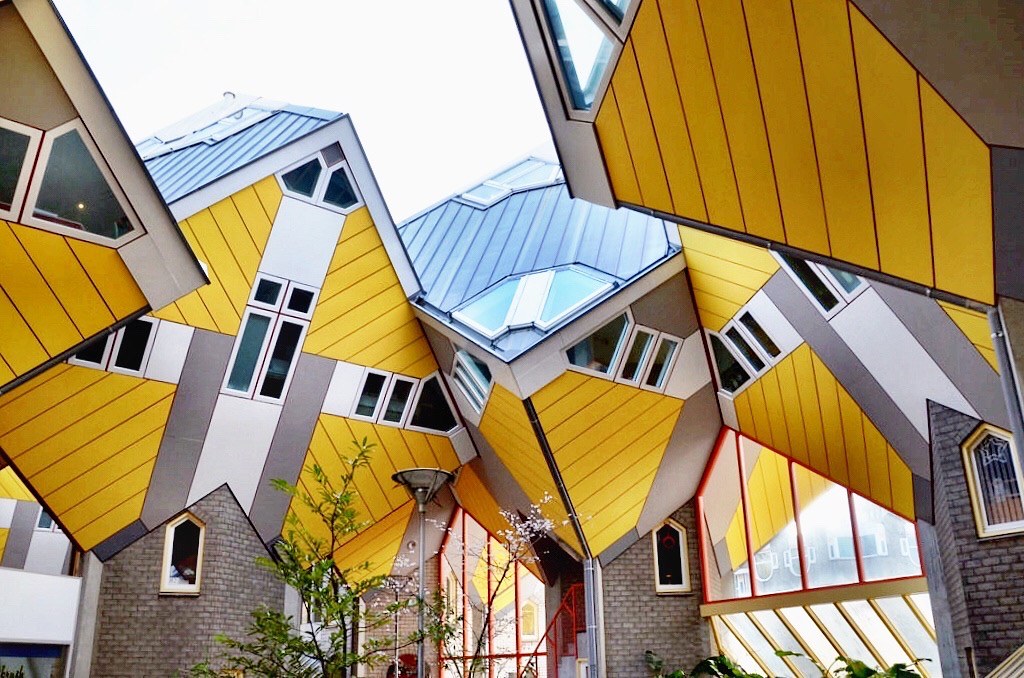 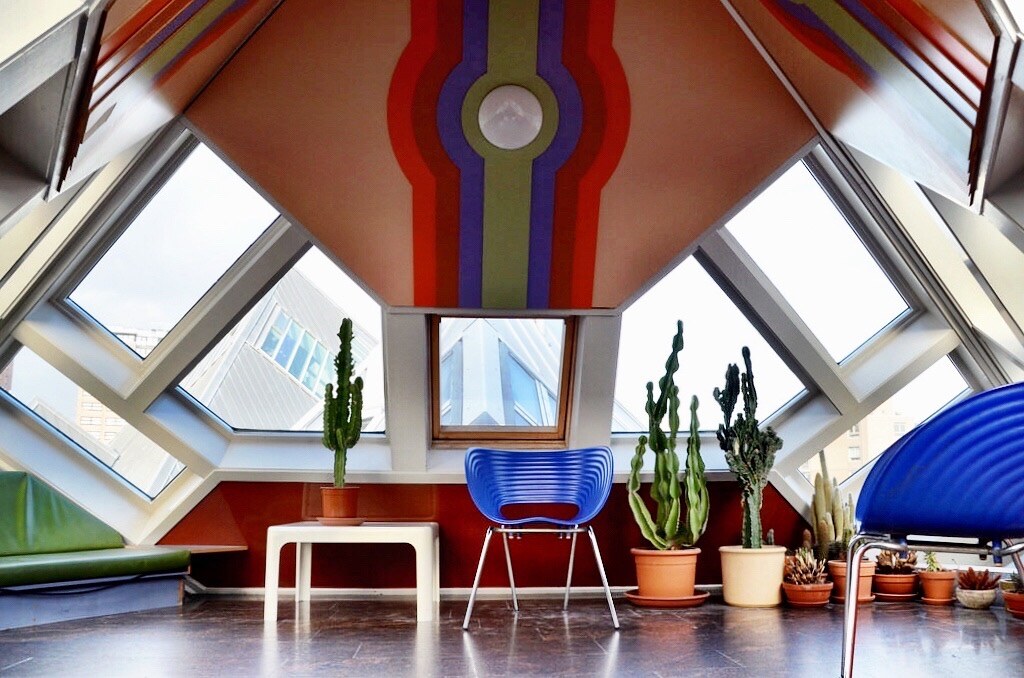 It says a lot about the concept that even today, 30 years after they were built, they’re still popular places to live and definitely to visit. In fact, so many people started to stop by the houses that a small “show cube,” a Cube House Museum really, was created so that curious visitors could see what these little homes are really like inside. Paying a few Euros, I entered the house and found something straight out of the 70s or 80s in terms of form and function. The first floor includes a living room and kitchen, bedrooms and a bathroom are on the 2nd floor and the top floor is left open to the residents and can be anything from a lounge area to a place for a small garden. But it’s all in a cube, one that’s at an angle no less. The walls and windows are angled at 54.7 degrees and the space is definitely compact – just about 100 square meters, or 1,000 square feet, of which 25% can’t even be used due to those strange angles. They’re a little weird and definitely quirky, but I fell in love with the look and feel of these homes, just one more architectural marvel in a city full of them. 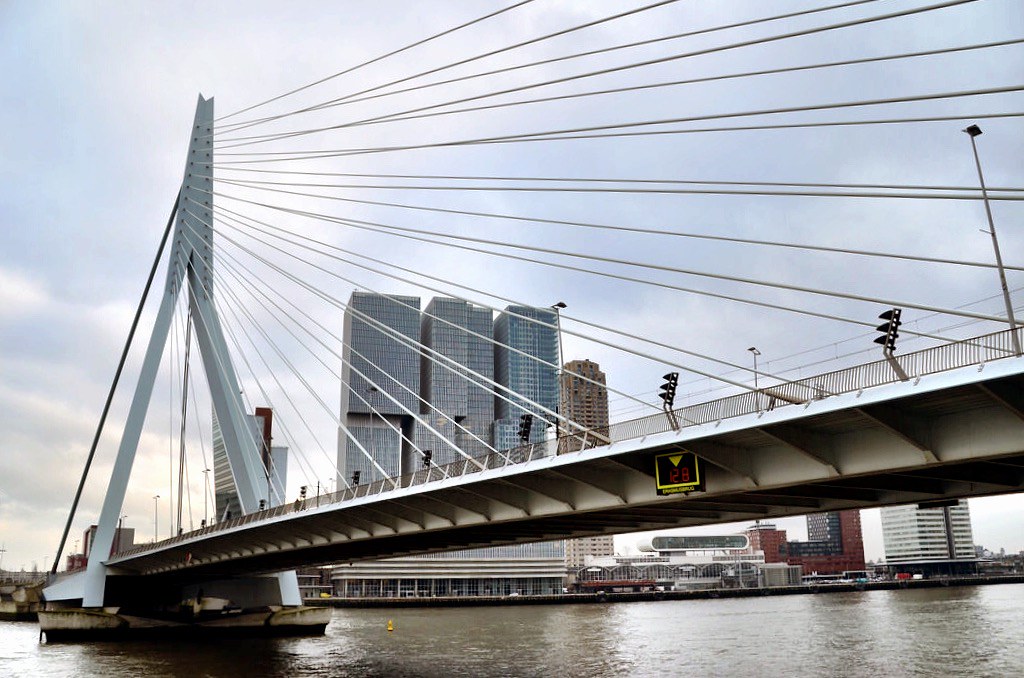 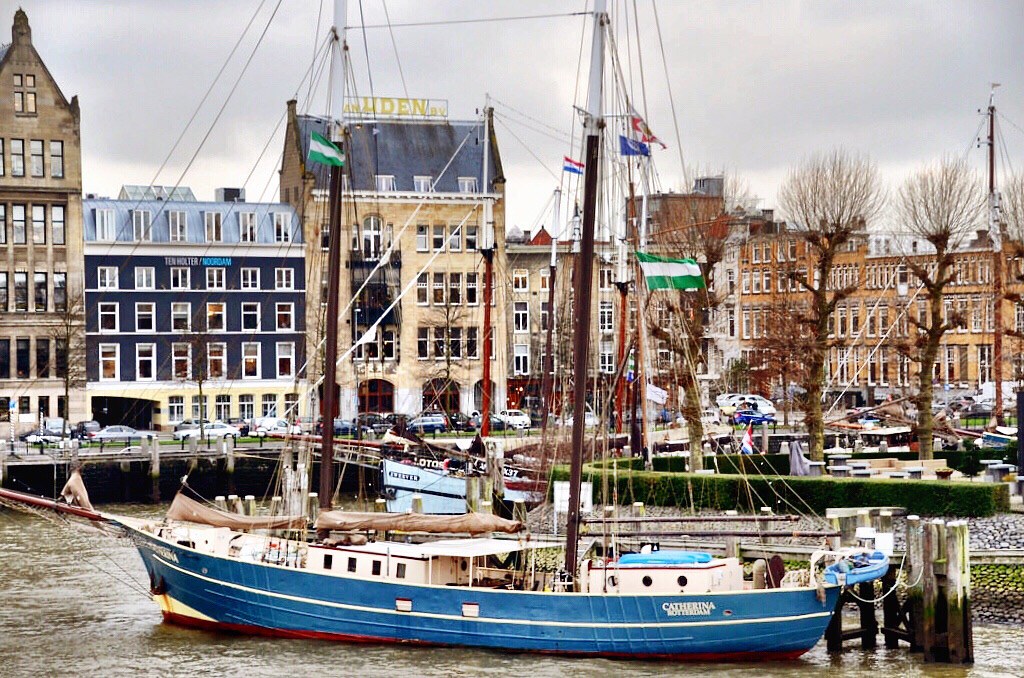 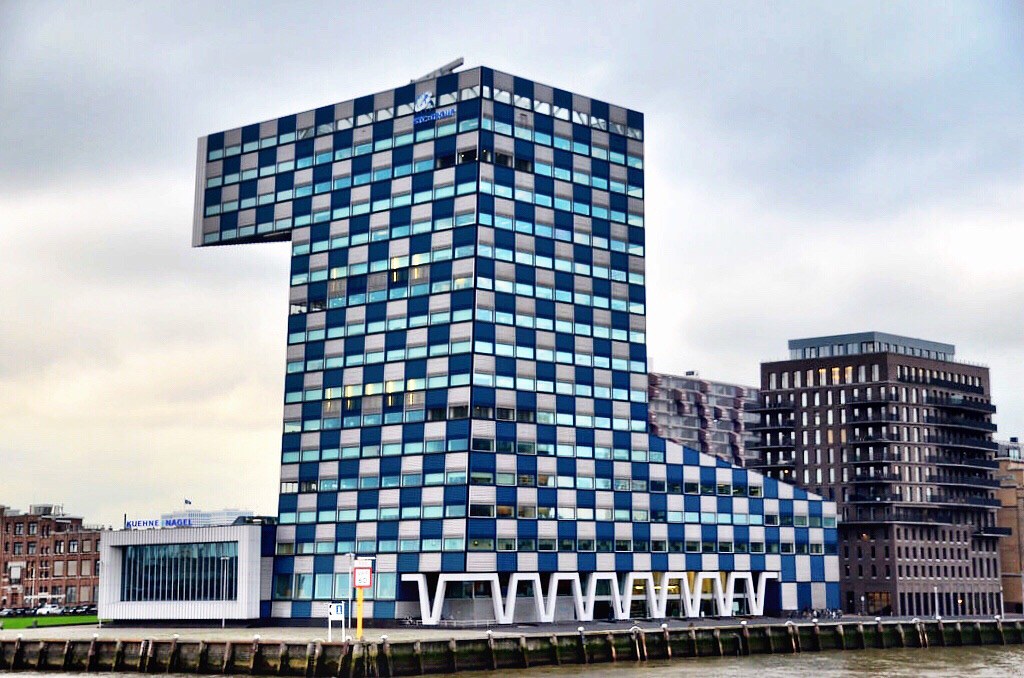 Rotterdam is about much more than its quirky landmarks though. Maritime trade has always been an important part of life in Rotterdam and even today it’s the largest port in Europe. It’s hard to get a sense for what this actually means though unless you take to the water, which I did on a scenic boat cruise of the port area. The Spido boat tour took us by the iconic downtown landmarks, but also out to the massive port complex itself, showcasing a mix of architectural designs both pre-war and Reconstruction. It’s an urban beauty that has to be seen in person to be properly appreciated, but it’s also an important way of getting to know Rotterdam better as a city.

I had no idea what to expect from my experience in Rotterdam, but I walked away with a respect for the city that is different from how I feel about many other urban centers. The word charm is a no-no in the travel world, but I will use it to say that while Rotterdam lacks the charm of other cities with an older center, or at least one that looks older, it has a different sort of beauty. It’s a modern beauty, best experienced through neighborhood walks and explorations instead of time spent in museums or important buildings. The beauty of Rotterdam is one that envelops guests, it surrounds them until you feel as if you’re part of the city landscape itself.

2 thoughts on “Exploring Rotterdam Through The Lens”