Humans are unfortunately very impressionable creatures and from an American point of view images of war and terror spring to mind when I hear the word Bosnia, even though the conflict that defined the Balkans has been over for more than 20 years. I’m not alone in that, when I first visited Croatia a few years ago I actually had people ask me if it was safe. That taught me a valuable lesson, that it’s difficult for any of us to shake off images we see on TV and in newspapers, even decades after the fact. I’ve spent a fair amount of time in Croatia, count it as one of my favorite countries and was excited to visit other Balkan nations while on a Viking Ocean cruise around the Mediterranean. Stops in Croatia reaffirmed my love of that country and a day spent in Montenegro introduced me to a new country, one I quickly grew to like. Bosnia was a little bit different and I was excited to visit for the first time on a day-long excursion offered when the Viking Star docked in Dubrovnik. The goal of the day was to visit the UNESCO protected city of Mostar and its famous bridge, but the day ended up being about so much more than that.

Bosnia and Herzegovina, like its neighboring countries, was part of the former Yugoslavia, the dissolution of which in the early 1990s led to the eruption of Balkan wars, creating all of those aforementioned images that are still seared on our collective memories. I certainly won’t get into the politics of those conflicts in this post, but the violence and the distrust between communities within the countries didn’t stop with the end of gunfire. As I saw throughout the day I spent there, those divisions are still very much alive. 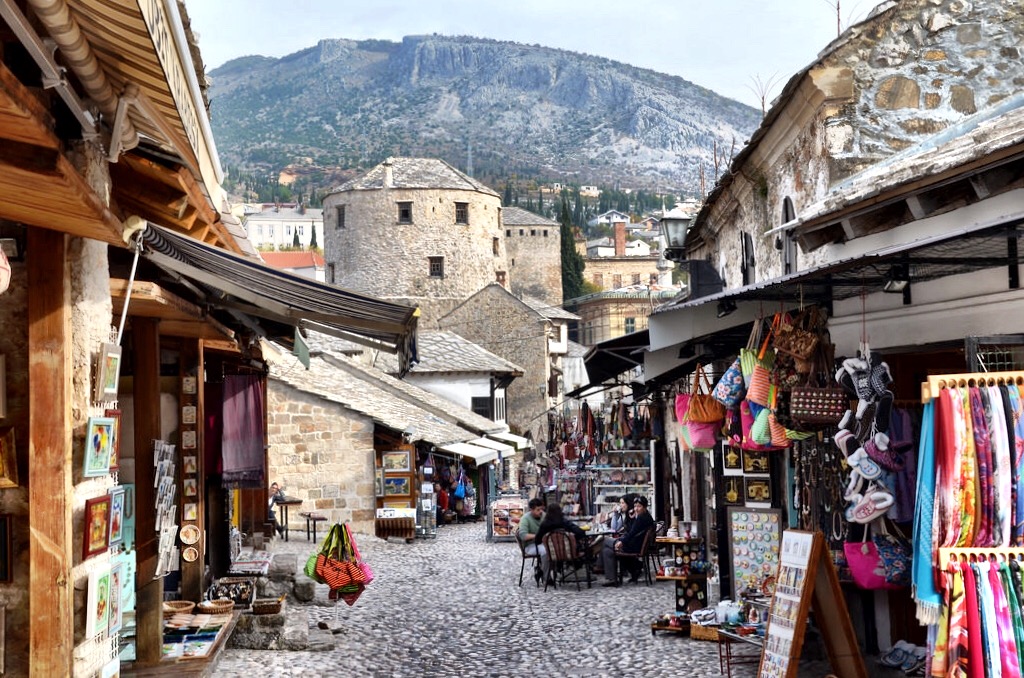 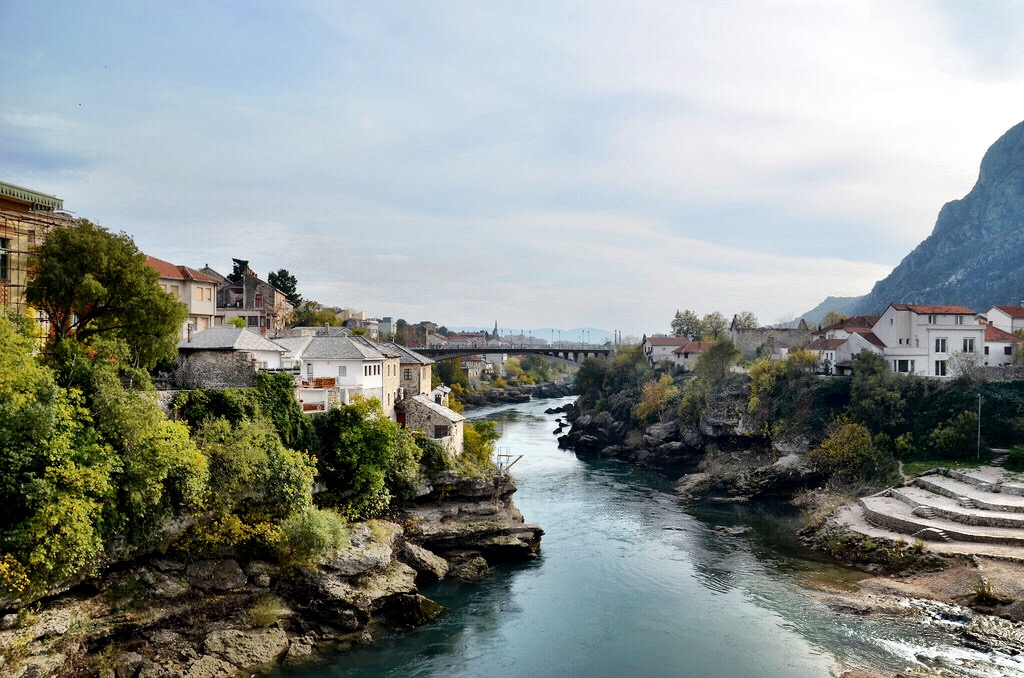 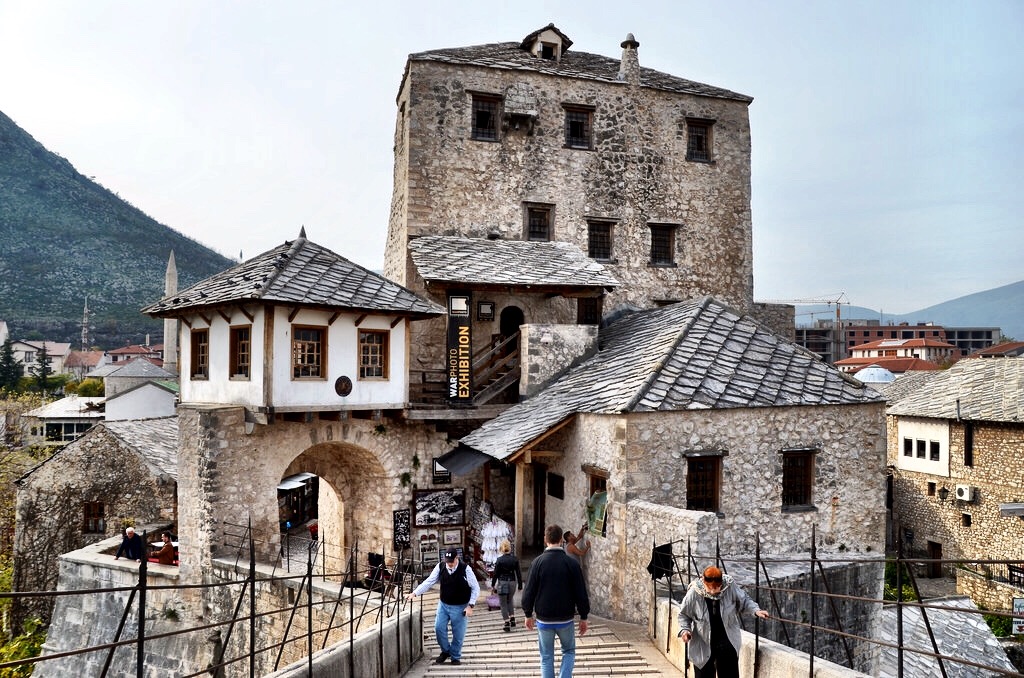 It was a three-hour drive from Dubrovnik to Mostar, along the way the bus passed small towns and villages and I couldn’t help but admire the countryside as it transitioned from the sunny Mediterranean, to the more mountainous and scraggly lands near Mostar. Mostar is one of the most popular tourist spots in Bosnia, mostly because of a single bridge. But Mostar has always been known for its bridges, the word Mostar actually means bridge keepers. Sitting along a key trading route, the town flourished in the medieval ages while under Ottoman rule. It was during this time of Turkish control when the old wooden bridge spanning the Neretva River was replaced with a stone one, what later became known as the Old Bridge. The most impressive bridge of its era, the Old Bridge stood for 427 years until it was destroyed in 1993 during the Croat–Bosniak War. It has since been rebuilt and it was to see that new version, as well as the city surrounding it, that brought me to Mostar on a sunny autumn morning.

Walking towards the old town of Mostar, I couldn’t help but notice the dilapidation all around me. Buildings in various states of ruin and bullet holes still marked the facades of apartment buildings. Mostar was especially hard hit during the wars, almost completely destroyed in fact, and walking around town you can see this destruction almost everywhere. That shocked me, to be honest. Visiting other countries in the region that also saw harsh times during the conflicts, I expected Mostar to have rebuilt just as they had. In Croatia you have to look hard in Dubrovnik or Zadar to see traces of that violent and dark decade, but in Mostar it’s just a fact of life. In general, Bosnia did not recover as well or as quickly as some of its neighbors, high unemployment and even cultural divisions have prevented much of the rebuilding that is so very necessary. The effect of this isn’t just visual, I think it’s also psychological. While everyone I met in Bosnia was friendly and welcoming, they also had a sense of melancholy that I haven’t found in other countries. A sadness, a sort of terminal depression and it affected me for the rest of the day. 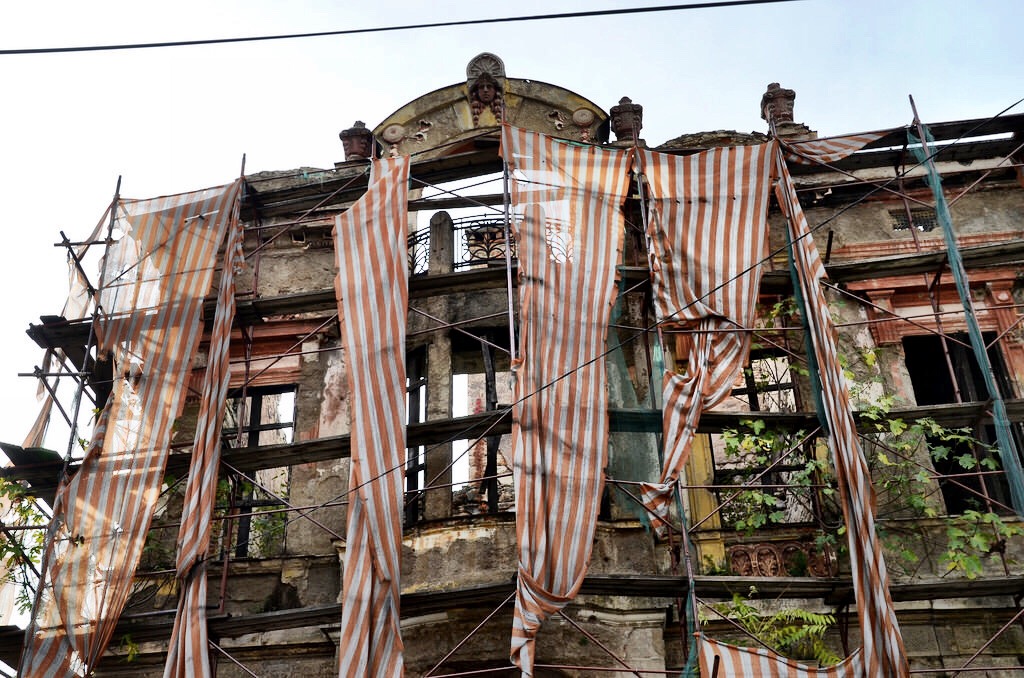 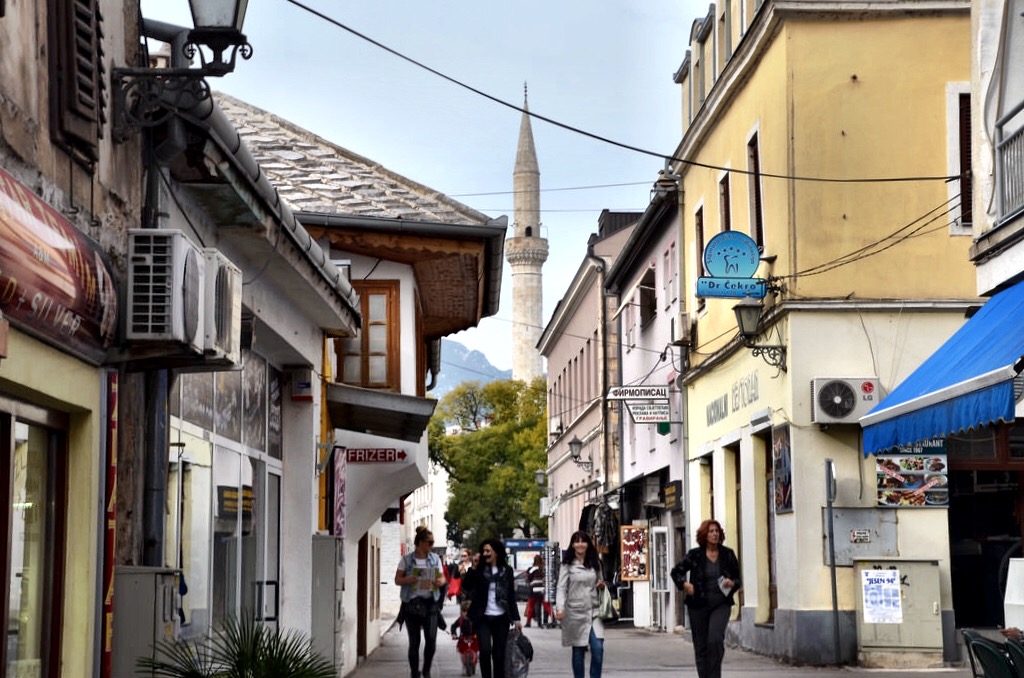 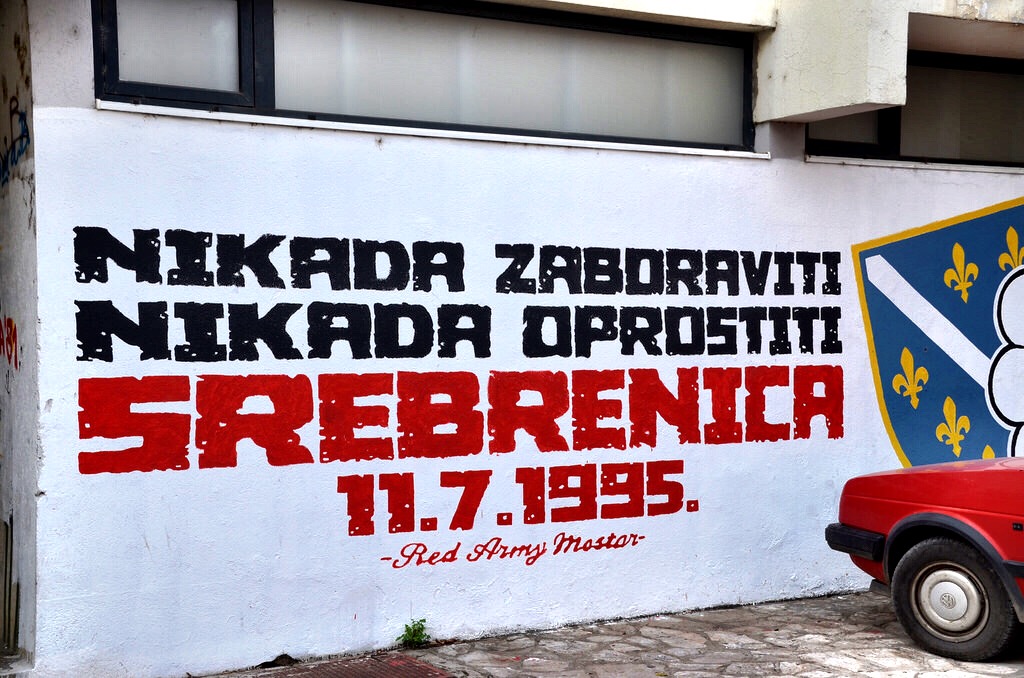 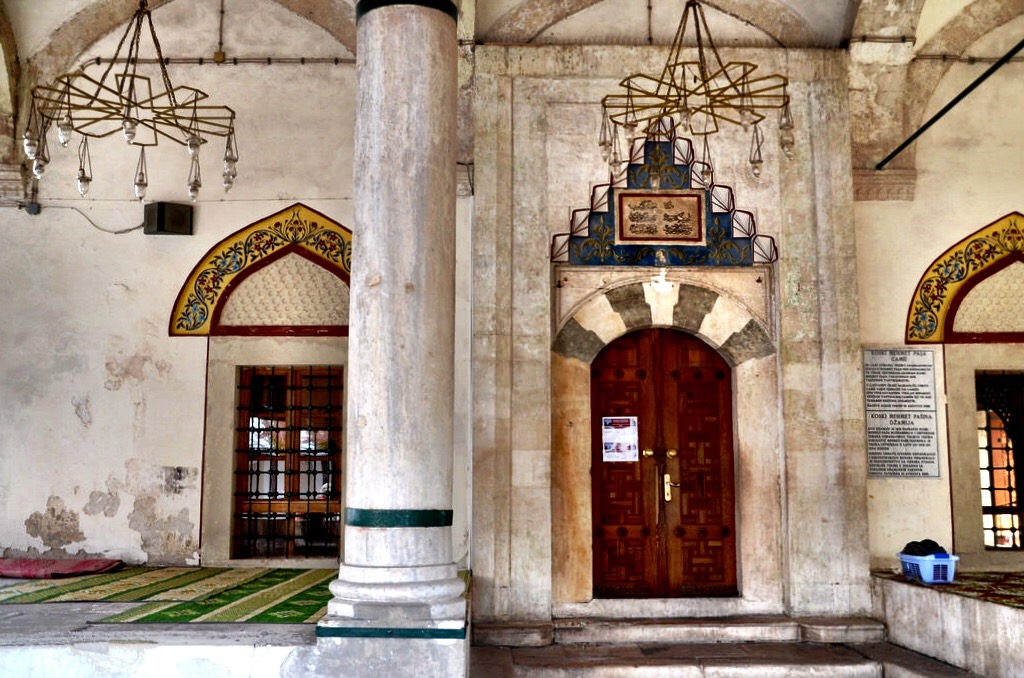 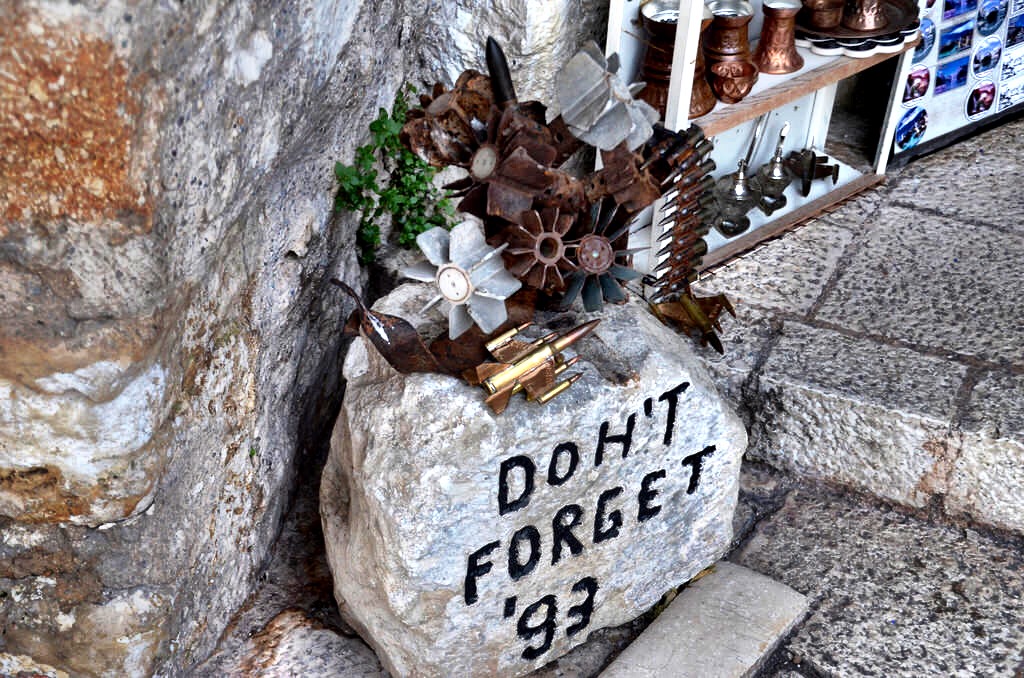 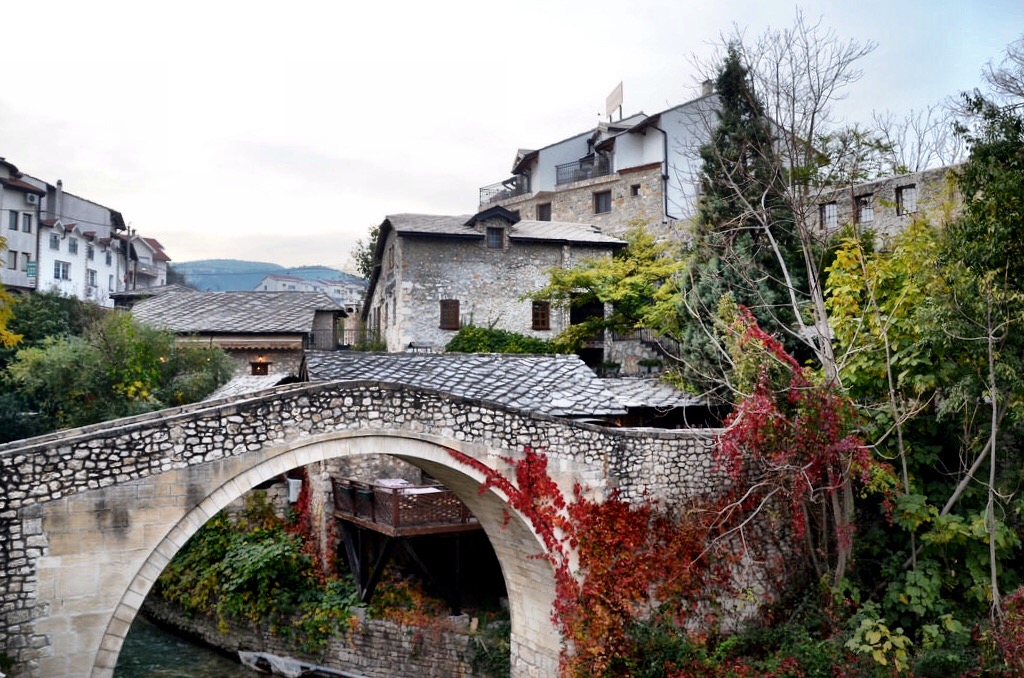 But there is no denying that Mostar is indeed a beautiful city and I quickly understood why it’s such a popular place for tourists to visit. The Old Town is lined with ancient cobblestones, and all roads seem to lead up to that famous bridge. While it’s a newly reconstructed version, this UNESCO protected site still captures the brilliance of its older namesake, an elegant beauty one normally doesn’t find in a simple bridge. But the old town is about so much more than just a bridge, and I soon found myself wandering aimlessly discovering quiet corners of the small community, other not-so-famous but still beautiful bridges and meeting the people who call the city home. There are definitely still divisions in town, and touring the old Muslim quarter I felt that acutely. Graffiti referencing past atrocities and more bombed out buildings, it was a stark reminder that not every community in the Balkans recovered in the way Dubrovnik did.

Leaving Mostar that afternoon, after gorging myself on a variety of delicious Bosnian specialties, I had three hours to think about and consider more thoughtfully my time spent in Bosnia. It wasn’t what I thought it would be like, but that’s not a bad thing. I was surprised by the gloom that seems to hang over everyone, but also marveled at the architecture and history found almost everywhere. It’s a strange country, a country that is still trying to figure itself out and in the process redefine what it means to be Bosnian. I hope they get there, it’s a long and hard process but after visiting I understood why they are as fiercely proud as they are. Bosnia, while sometimes overlooked, is a great place to visit and I hope to one day get the chance to return and learn even more about its history and, most importantly, its people.