One of the aspects of the Viking Ocean cruise I enjoyed most was the heavy focus on the destinations. Unlike so many other cruise lines who focus on the party-like atmosphere onboard, Viking is all about bringing passengers closer to the ports visited, which is how I found myself exploring the small country of Montenegro. That’s actually one reason why I chose the Empires of the Mediterranean itinerary, while some of the ports were familiar to me, many more were new and I was excited to see and experience cities and even countries I hadn’t visited before. I didn’t know a lot about Montenegro though and for whatever reason, I honestly didn’t expect a lot from my day visiting this small Balkan nation. Maybe that’s why I was so surprised when I discovered not just a nice place to visit, but one of the best destinations I’ve discovered in a long time. 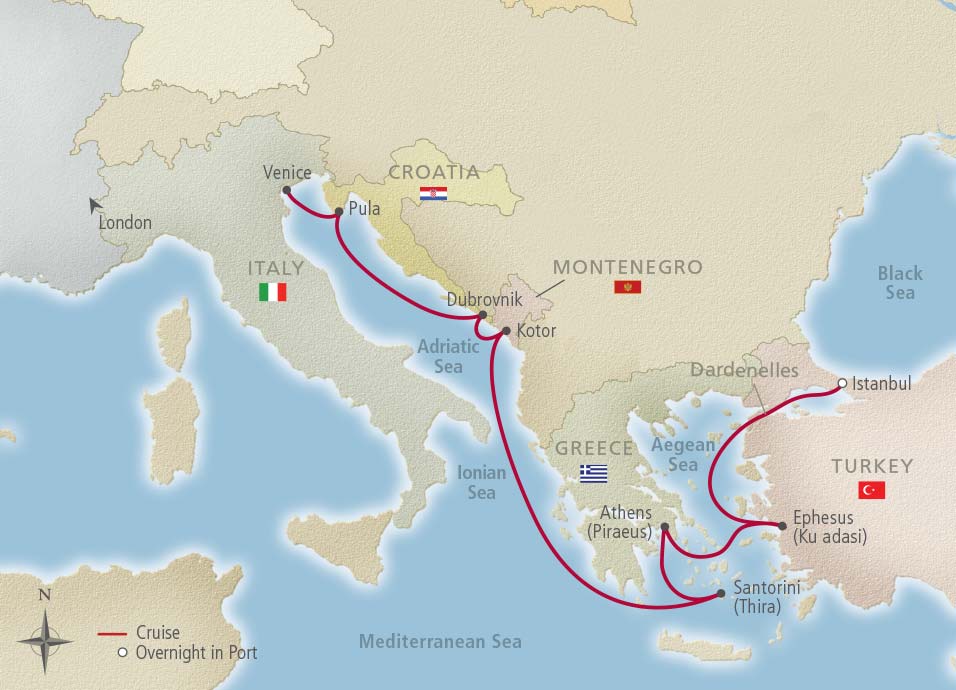 Where and what is Montenegro?

Let’s start with some basic facts since if you’re like how I was before the cruise, you probably don’t know a lot about Montenegro as a country. Located in Southeastern Europe, Montenegro rests on the Adriatic Sea and is bordered by Croatia, Bosnia and Herzegovina, Serbia and Albania. It was part of the former Yugoslavia and officially became its own country in 2006. Montenegro translates to Black Mountains, its high peaks defining in many ways life in this small country. While it has some of the most rugged terrain in Europe, it’s also well known for its beaches and more laid back attitude. There’s a lot more to Montenegro though that its geography, as I learned when I explored different regions during my day ashore. 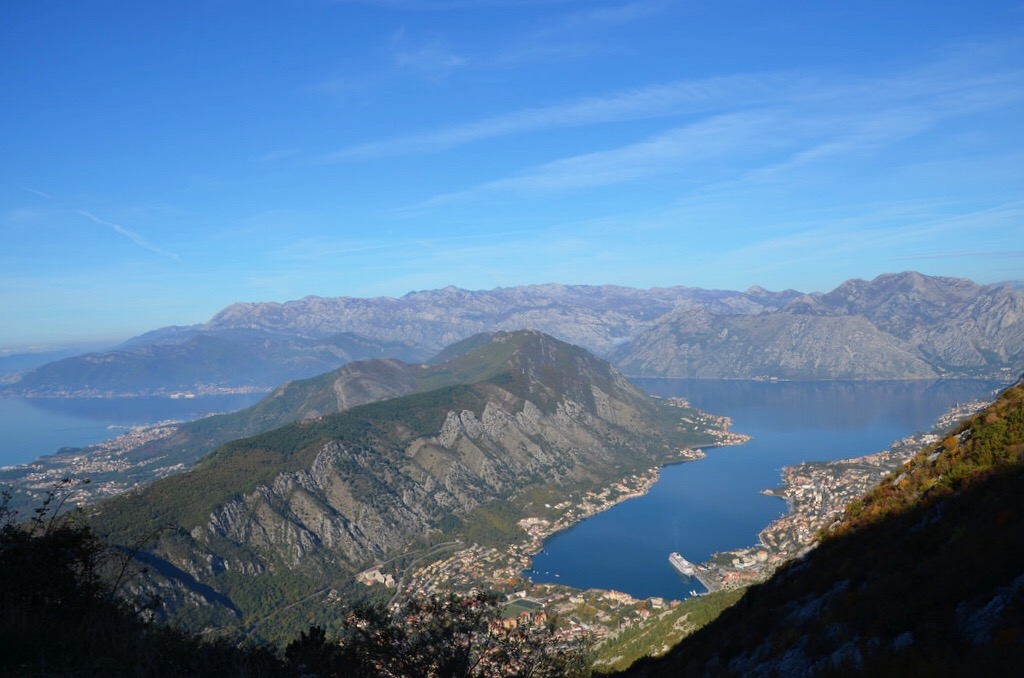 For a tiny nation, Montenegro packs a punch when it comes to stunning views. I joined a Viking excursion that spent the day visiting different areas of the country – my first attempt to better understanding it away from Kotor and the coast. Within a few minutes I knew I selected the right day-trip, as the bus made its way up along a steep mountain road complete with more than 25 switchbacks. While not for the faint of heart, the views at the top of the road were well worth any hair-raising moments along the drive itself. There in front of me was the Bay of Kotor, perfectly framed by the nearby mountains. While it looks like a fjord, the bay and surrounding peaks were actually created by earthquakes over the years, one of the defining features of life in Montenegro. 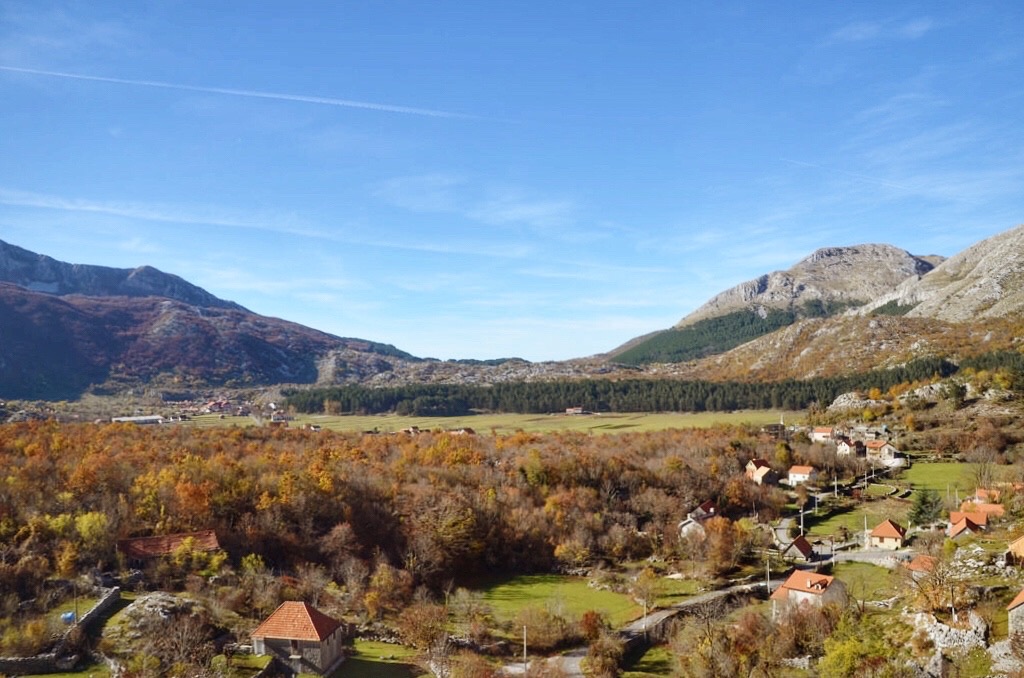 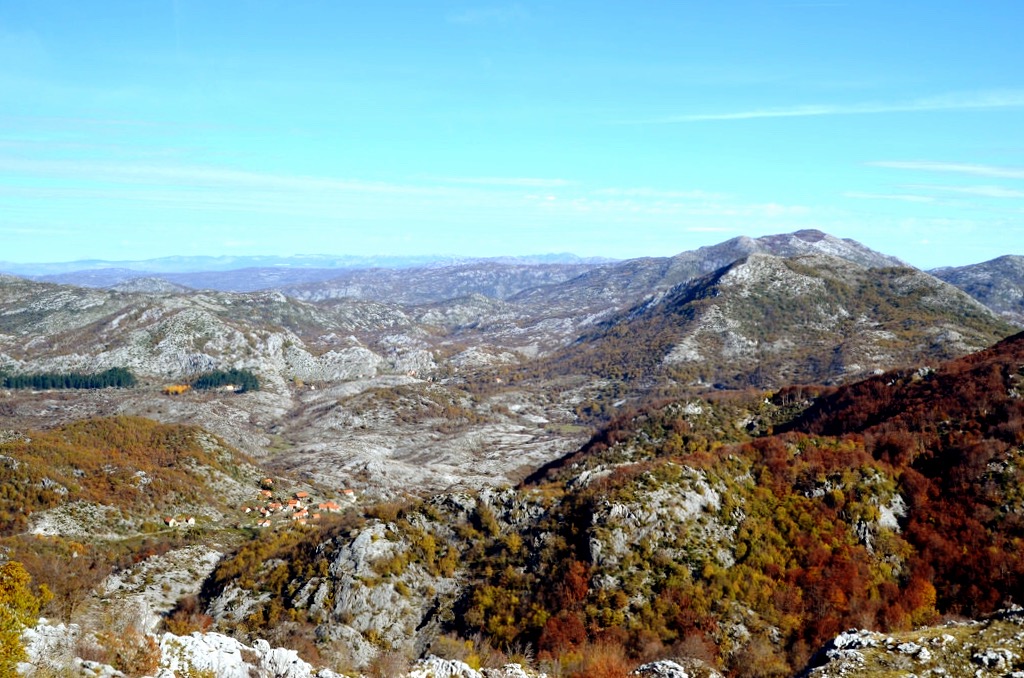 Heading further inland was a mix of scraggly fields and open valleys, along with some of the most rugged terrain I’ve ever seen. At times it looked more like Scotland than a Mediterranean country, but it’s for those differences that so endeared Montenegro to me. Along the coasts a Mediterranean climate is normal, but deeper inland amongst the mountains is a decidedly Alpine terrain with some of the best skiing in Europe.

A country is about much more than pretty vistas though, and what ultimately made me love Montenegro so much was its culture. I’m amazed by the differences between the Balkan countries located right next to each other, but the attitudes and mindsets between Bosnia, Croatia and Montenegro couldn’t be more different. From my brief experience, the Montenegrins I met were all affable and friendly with a fierce sarcastic wit that lightened just about any moment. Rather than be dour or depressed by their history over the last few decades, they’re positive, confident and forward thinking. They’re also a little self-deprecating in a fun way, something completely absent from neighboring countries. 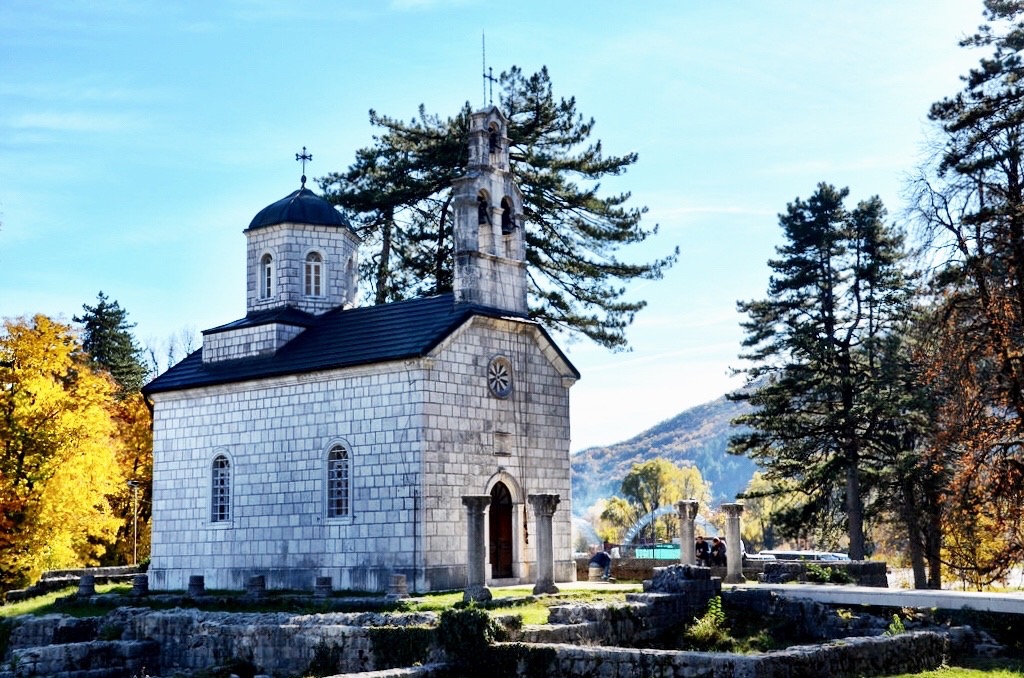 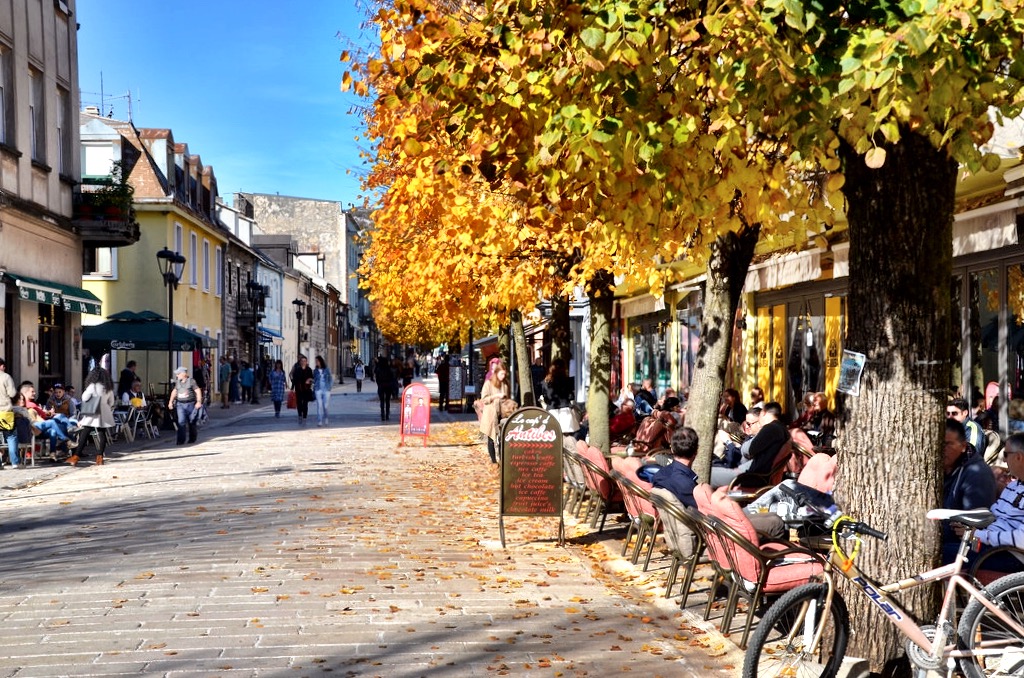 The culture itself though was what I enjoyed the most. Part of the tour included a stop in the country’s former capital city, Cetinje. While the other tour participants visited the old royal residence, I decided to go off on my own and explore this important city of just 15,000 people. Fall was in full swing, and the leafy boulevards were lined with golden trees in a dozen different colors. It also seemed to be prime time for coffee shops, because all along the main street I found any number of cafes, all completely packed with people enjoying an espresso and a snack, chatting with friends and soaking up the fine weather. I decided to join them, and as I sat there drinking a rich cup of Turkish coffee, I found myself falling for the town. It was relaxing, and watching residents walk by, laughing and smiling I could have been in Budapest or Prague, anywhere but a tiny town in the middle of Montenegro. At that moment I realized that Montenegro was different from other neighboring countries, the people there seem to just enjoy life in a different way and as a visitor, that’s a great thing to be a part of. 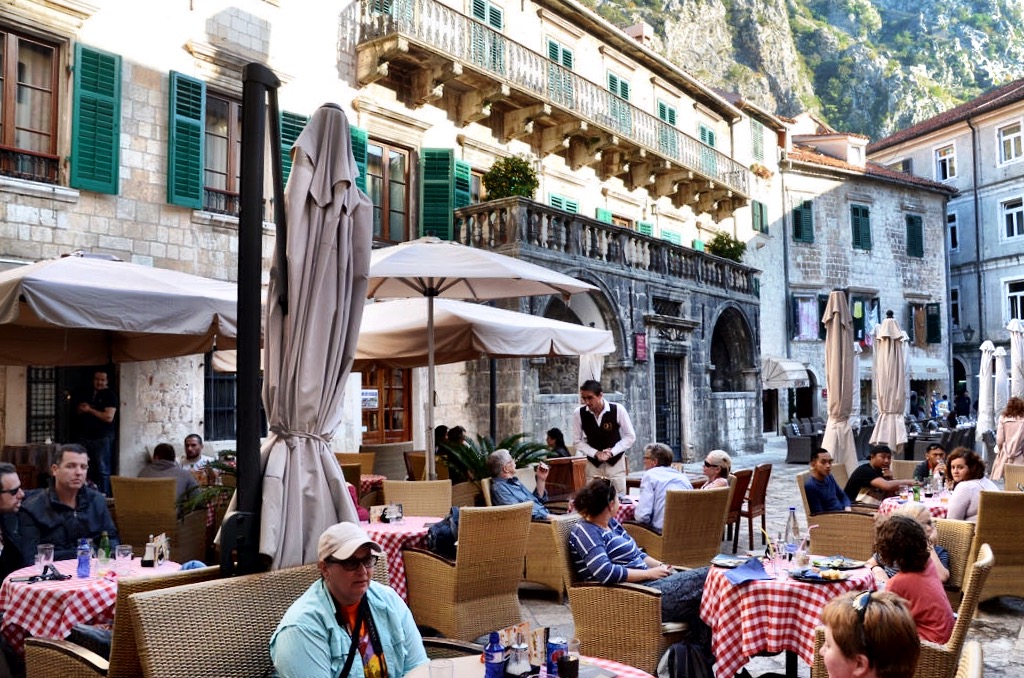 Of course for many people the highlight of any visit to Montenegro is spending time in the old walled city of Kotor. While the city has been settled since before the Romans, it was during the centuries of Venetian rule when it became an important city along the Adriatic. Enjoying prosperity thanks in large part to its trade in salt, the arts thrived in Kotor during this time and it quickly became one of the great cultural cities of Europe. Today you can see all of that and more through a simple walk around the small Old Town. Its walls extend high up into the hills and provide the first clue to the importance of this compact community. The first thing I noticed though was how Italian everything looked – I could easily have been in Mantua or Bologna – anywhere but Montenegro. That’s actually one reason why Kotor was named a UNESCO World Heritage site, for its incredible collection of Venetian architecture. It’s a style that locals still maintain, and many of the shops and homes have been in the same families for generations. 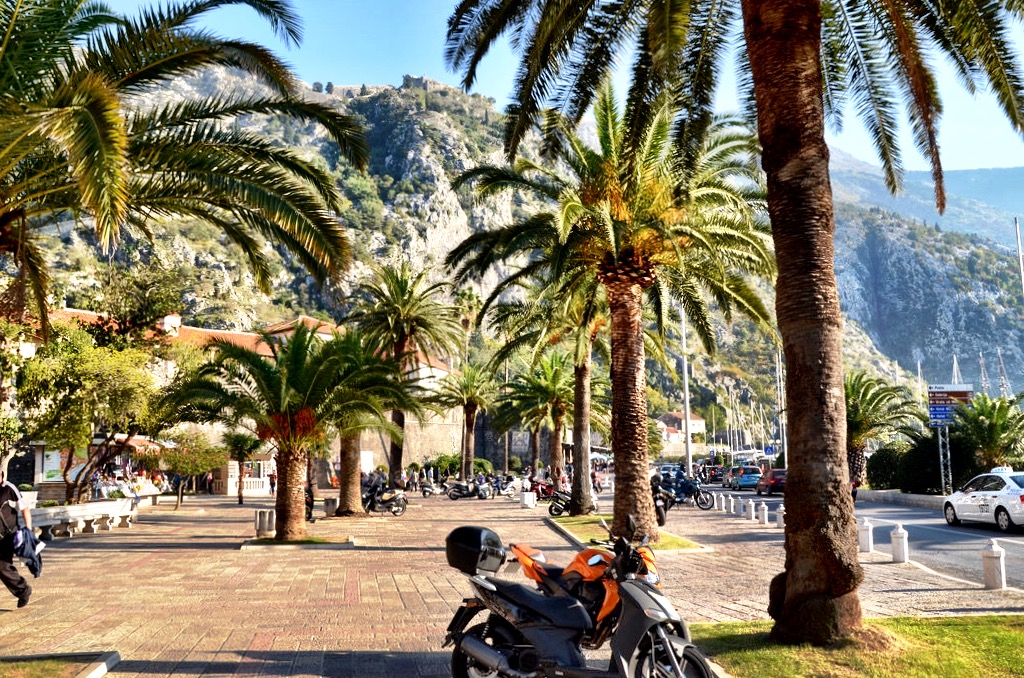 It’s also one of those towns where the best thing to do is nothing at all. Sure, there are churches, museums and famous sites, but you’ll get the most out of your time in Kotor by picking any one of the many cafes and enjoying a leisurely meal in the warm comfort of the sun and swaying palms. From there you’ll watch as the town walks by and you’ll get an even better appreciation for the leisurely pace of life in this part of the world. There are few regions around the planet that I enjoy more than the Adriatic and Mediterranean. The people there understand what’s really important in life, and it’s not rushing off to the next meeting or checking your iPhone for emails incessantly. No, it’s all about appreciating what you have and the simple beauty all around us that makes life so very special. That’s what Kotor and ultimately Montenegro is all about, and it’s for that reason why I enjoyed my time there so very much.

Whether it’s by cruise ship or an independent trip, when you visit Montenegro I think you’ll be as pleasantly surprised as I was. Surprised by its raw natural beauty, its amazing food and wine but, most importantly, for the warm and welcoming culture just waiting to be discovered.