My love of great Christmas markets is hopefully not surprising at this point. For several years, I have traveled to different regions in Europe with the express goal of experiencing different styles of celebrating the Christmas season. Last year I did something a little different and joined a Viking river cruise along the Danube, exploring cities and towns along the way each with their own unique holiday traditions. The cruise started in Budapest, a city I quickly came to love not just for the culture and history, but for their Christmas traditions as well.

We arrived a day early, since it was my first visit to the Hungarian capital I wanted some extra time to explore. That, along with deciding to stay at the Four Seasons Gresham Palace, was a great decision since I was able to experience so much of Budapest during the holiday season. A short walk from the Four Seasons is the city’s largest Christmas market, centrally located in Vörösmarty Square. It was just a week and a half before Christmas, and the market was packed with locals all out to enjoy some great food and pick up some last minute presents. From goulash to giant sausages, the market had a little bit of everything, but the real star of the show was the so-called chimney cake. 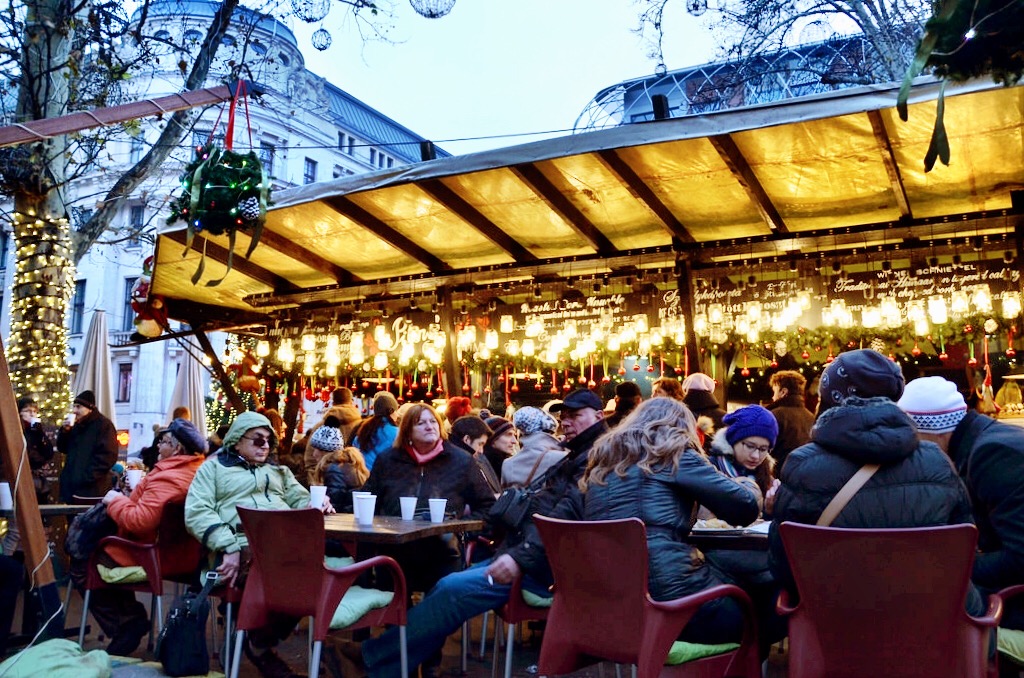 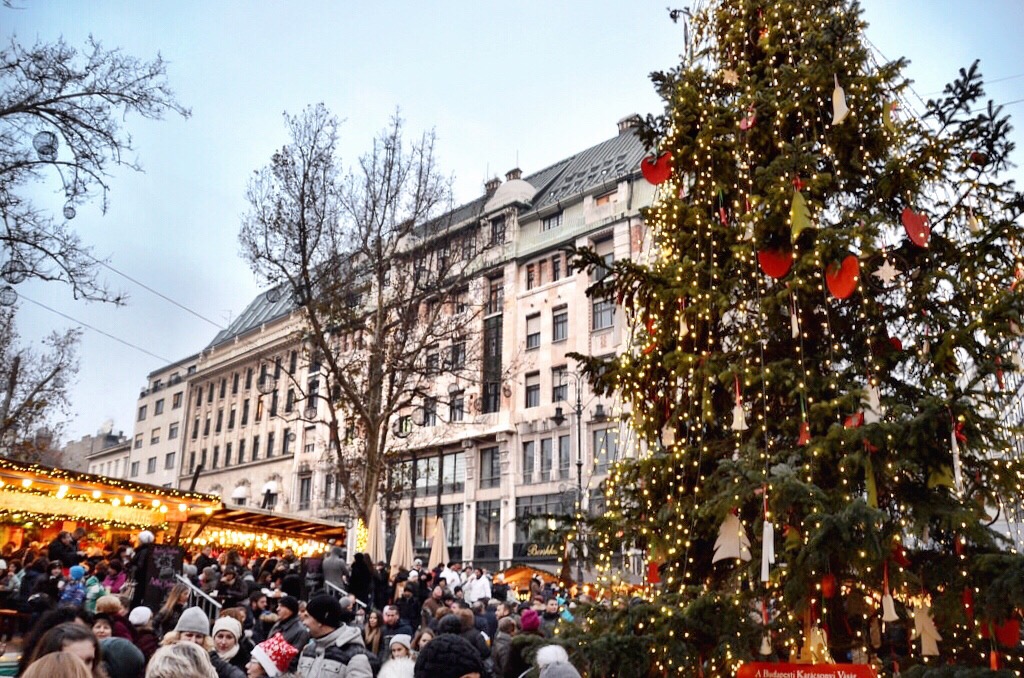 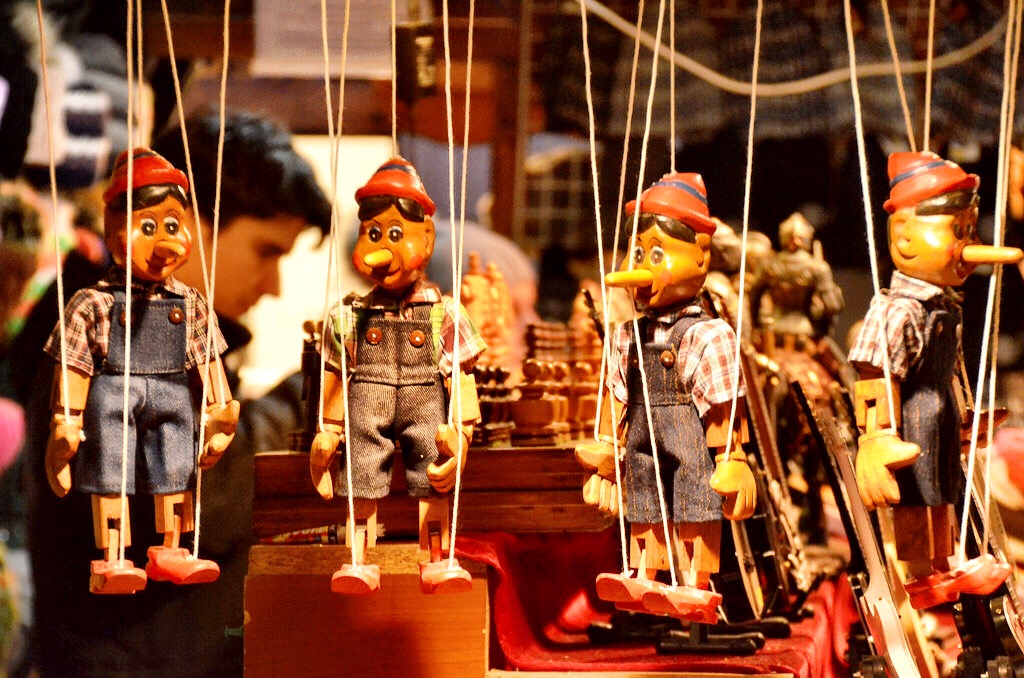 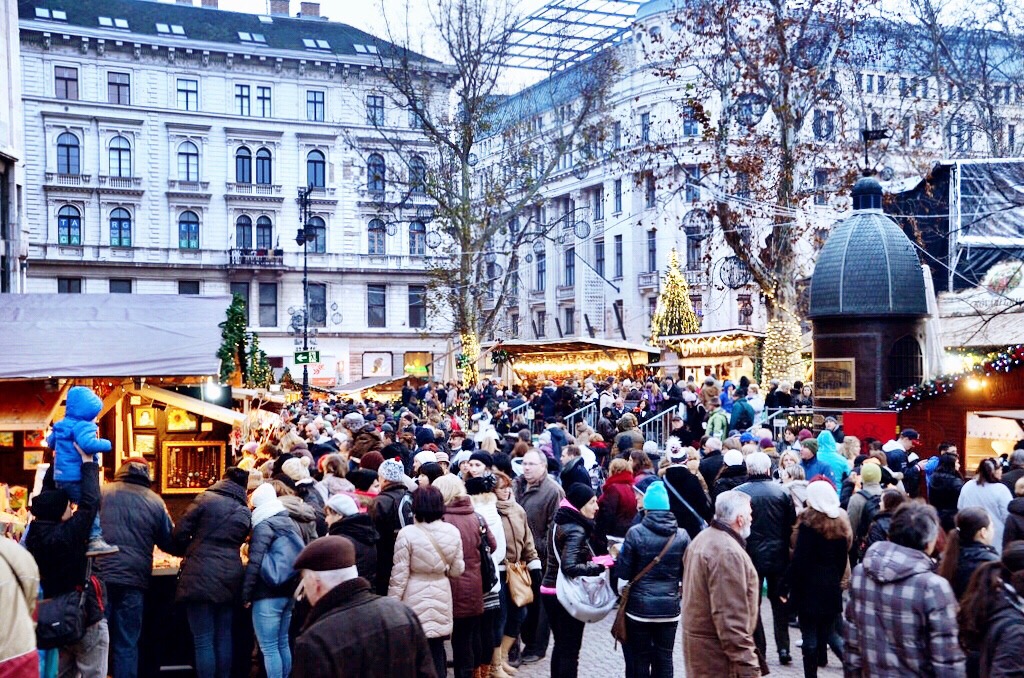 Originally from Transylvania, the kürtöskalács or chimney cakes are enjoyed throughout the year, but they take on a whole new level of popularity when it’s cold outside. Made from sweet yeast dough, the cake starts off as a strip that is spun and then wrapped around a cone–shaped baking spit and rolled in granulated sugar. It is baked on a charcoal grill while doused with melted butter until its surface becomes golden-brown. During the baking process the sugar caramelizes and forms a shiny, crispy crust on the cake. Made to order, the cakes are served up hot and the steam rising up looks just like a chimney, hence the name. They’re also delicious and I wasn’t the only one who thought so, the cake stands always had the longest lines.

The holiday spirit in Budapest wasn’t only relegated to the massive market; throughout the Pest side were plenty of examples of how the city celebrates the season. Just about every tourist to Budapest will at some point find themselves in the City Park, a massive space that was transformed in the 19th century for national celebrations. Museums, monuments and a pond that turns into an open-air ice rink in the winter, this greenspace is the pastoral heart and soul of the city. A highlight for me was that ice-rink, which on a chilly December morning looked more like a Currier and Ives print than real life. The weather didn’t keep us down though as we walked through the park, marveling at the massive Vajdahunyad Castle in the distance. The castle was also built for the 19th century Exhibition to feature copies of several landmark buildings from different parts the Kingdom of Hungary. Originally made just from cardboard and wood, it became so popular that it was rebuilt from stone and brick. 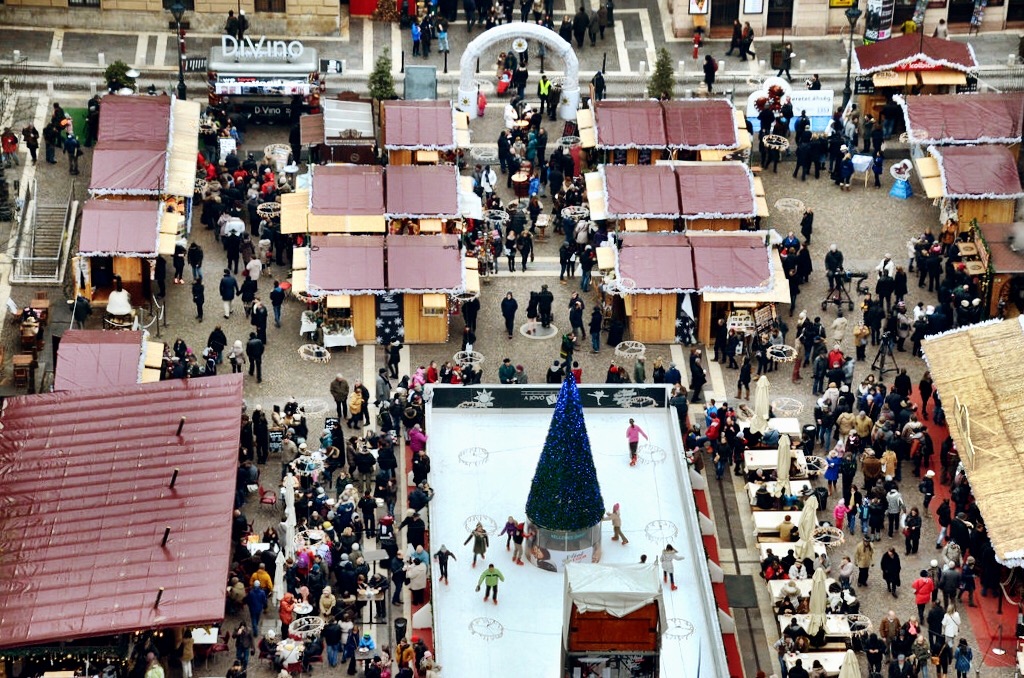 Visitors will also necessarily found themselves in another beautiful spot, St. Stephen’s Basilica. I’ve visited a lot of churches during my travels, so I thought I knew what to expect at the beautiful St. Stephen’s Basilica in Budapest. And I was right, to a degree, inside it is indeed a beautiful church and we were lucky enough to visit during special seasonal services, making an ordinarily cold stone church come to life with music, incense and faith. But, the real highlight of the visit had nothing to do with the church itself, instead it was going to the top of it for some of the best views in town. For a few dollars, visitors can take an elevator to the top for a stunning 360-degree view of Budapest. From the top you can see everything and finally get a sense of the city’s design and layout. You can even see over to the Buda side, just as long as it’s not too hazy outside. As an added bonus, directly in front of the basilica is another, smaller Christmas market with even more food and gifts for sale. 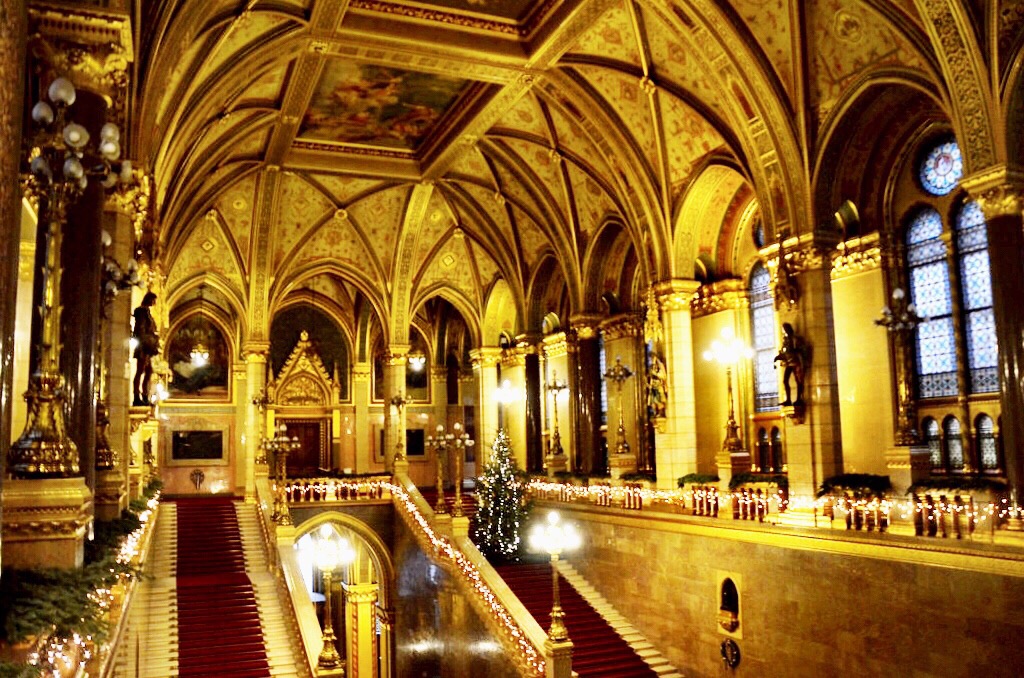 Even the top tourist spot in town had some holiday touches added to it, the iconic Hungarian Parliament building on the banks of the Danube. This stunning architectural masterpiece is always a beautiful sight, but during a brief tour inside the building itself I noticed that the main lobby had been festooned with lights and even a Christmas tree. 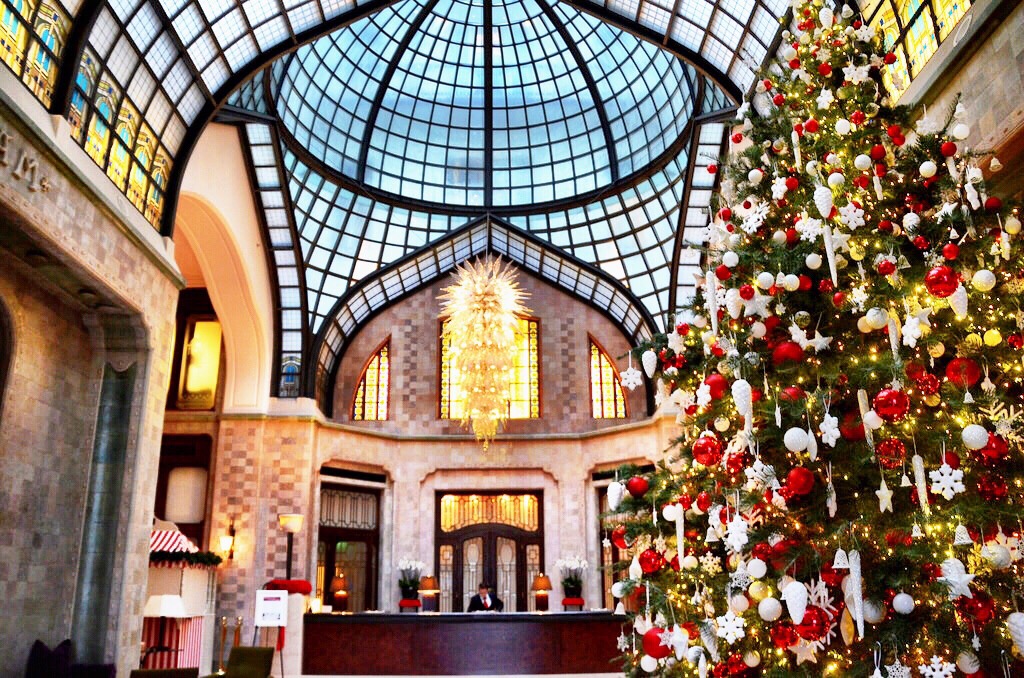 Of course I’d be remiss if I failed to include the hotel where I stayed, the Four Seasons Gresham Palace. Housed inside a historic Art Nouveau building, this well located hotel was decked out for the holidays during my visit. In addition to the normal Christmas flair, in 2014 the hotel added something new – a Christmas market within the hotel itself! Lining the corridor just off the main lobby are stands featuring food, drink and great gifts, all in the same elegant style as the hotel itself. It must have been a success, because the Four Seasons Budapest has brought it back for the 2015 season, so if you’re in town be sure to stop by.

Budapest is made up of two former towns, Buda and Pest, and on the Buda side I discovered quieter neighborhoods, but ones that still know how to celebrate Christmas. Buda’s Castle District is on most tourist must-see lists and with good reason. Famous for its medieval, baroque and 19th-century houses and churches, the castle and palace complex was the seat of power in Hungary for centuries, and the community of courtiers and professionals that grew up around it guaranteed a certain air of power and exclusivity. I could feel that sense as I walked up the hill towards Matthias Church, next to the Fisherman’s Bastion and some of the best views in town. From this terrace you overlook the Danube and can see far into the Pest side, with the magnificent Parliament Building taking pride of place. It’s a beautiful look at what many of us consider to be the classical view of Budapest, ironically enough only able to be enjoyed properly from Buda. I best got that Christmas feeling though not in the church, but in a small coffee shop.

It was December and chilly, so I ducked into the first open coffee shop I found. I soon figured out that it wasn’t an average cafe though; it is the oldest one in Budapest. Ruszwurm has been serving up drinks and homemade cakes since the 1820s and most of the furnishings inside are all original. Before that the same space was home to a gingerbread shop that dated back to the Middle Ages, so that very spot has been serving up sweets for centuries. For me this is an amazing fact, but one that didn’t necessarily matter as I warmed up over a hot coffee, watched the other patrons prepare for a Saturday afternoon of Christmas shopping and enjoyed the peaceful joy of a really great coffee shop.

Budapest is a great city no matter when you visit, but as I learned the city becomes even more interesting to visit during the Christmas holiday season.

2 thoughts on “The Best of Budapest During The Christmas Season”