Over the last few months I’ve found myself traveling to London a few times, either as my final destination or en route to another country in Europe. On these trips I purposefully selected different airlines and classes of service to see the differences between the airlines and to determine which I think is the best one for traveling to, from or through Great Britain. I expected some differences between British Airways and Virgin Atlantic, but what I never expected to find was the stark divide between the two when it came time to appraise and evaluate the flights to London.

I’m a luxury traveler and as such find myself upgrading whenever I can. That doesn’t always happen though, which is why I routinely find myself flying in a variety of different classes wherever I go. Also, for the purposes of this post you should know that I flew between Washington Dulles International Airport to London Heathrow. For one trip I was booked on Virgin Atlantic and the other trip on British Airways. I had flown Virgin several times in the past, but this was the first time with BA in probably a decade or more. That all being said, these were my observations.

Virgin Atlantic – Virgin whimsically calls their Business class section Upper Class, and the experience starts well before you ever reach your seat. Their lounges are famous for their design, made to order food and fun touches like pool tables and even Jacuzzis. But of course the onboard experience is what we’re all after, and from my experience it’s one of the best out there. Set up in a herringbone pattern, the lay-flat beds and seating areas may be compact, but retain a high level of privacy and comfort. From the service to the food and ultimately the ability to relax, I couldn’t find anything wrong with my flying experience in Upper Class. For overnight flights they also offer sleep suits, an amenity usually only reserved for top-tier First Class products. Upon arrival into London Heathrow, passengers are given fast track through immigration and there’s even an arrivals lounge where you can get a quick shower and a bite to eat before heading out. 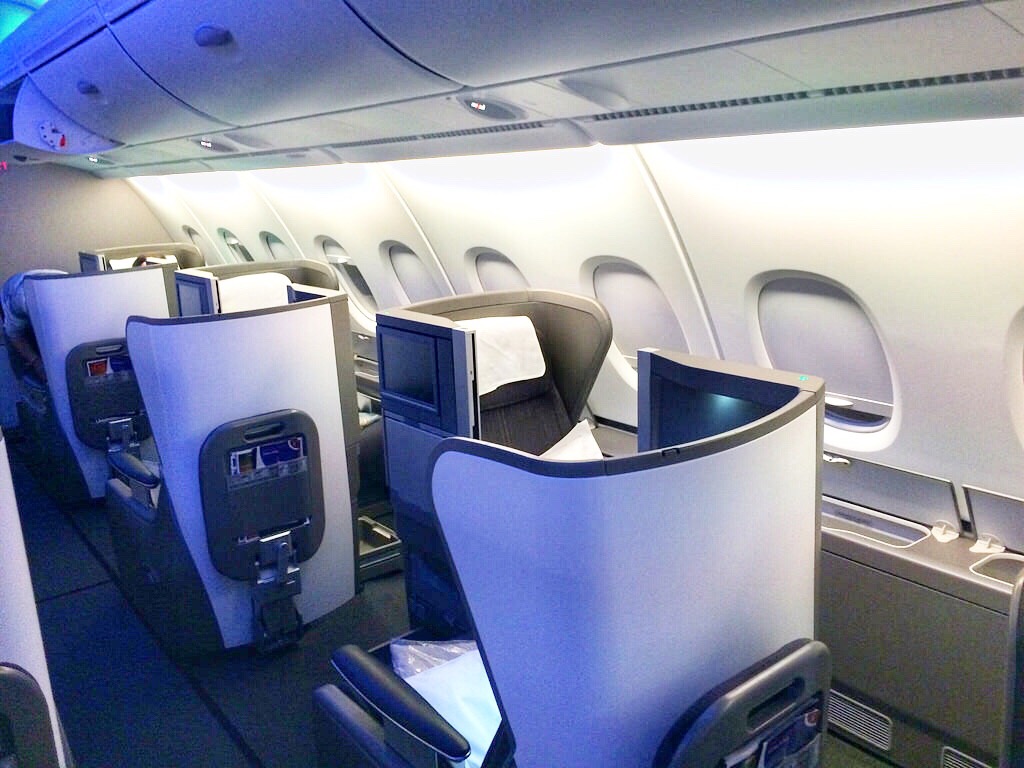 British Airways – Flying in the BA Business Class section on a massive A380, maybe my expectations were too high. Because it was a newer plane, I thought that the products onboard would be state of the art, but what I found was seriously lacking. The first thing I noticed was how the Business Class section itself is set up, with seating areas arranged so that you’re facing the passenger next to you. Yes, there are privacy screens but the set up is still awkward and makes it impossible to have it feel like a luxurious experience. I also felt like a number and not a valued guest, BA exhibiting the sad character trait of taking premium passengers for granted rather than offering amazing service. Dinner was ok, but not great and rather than asking, the flight attendant assumed I’d just want an express meal given the late hour of the flight, which was in fact not what I wanted and led to an awkward and annoying meal service. They also forgot to wake me for breakfast, so I didn’t have time to eat before landing. Add to that the fact that two very young children were in the Business Class seats near mine, and the trip was one of the worst Trans-Atlantic Business Class flights I’ve ever experienced. 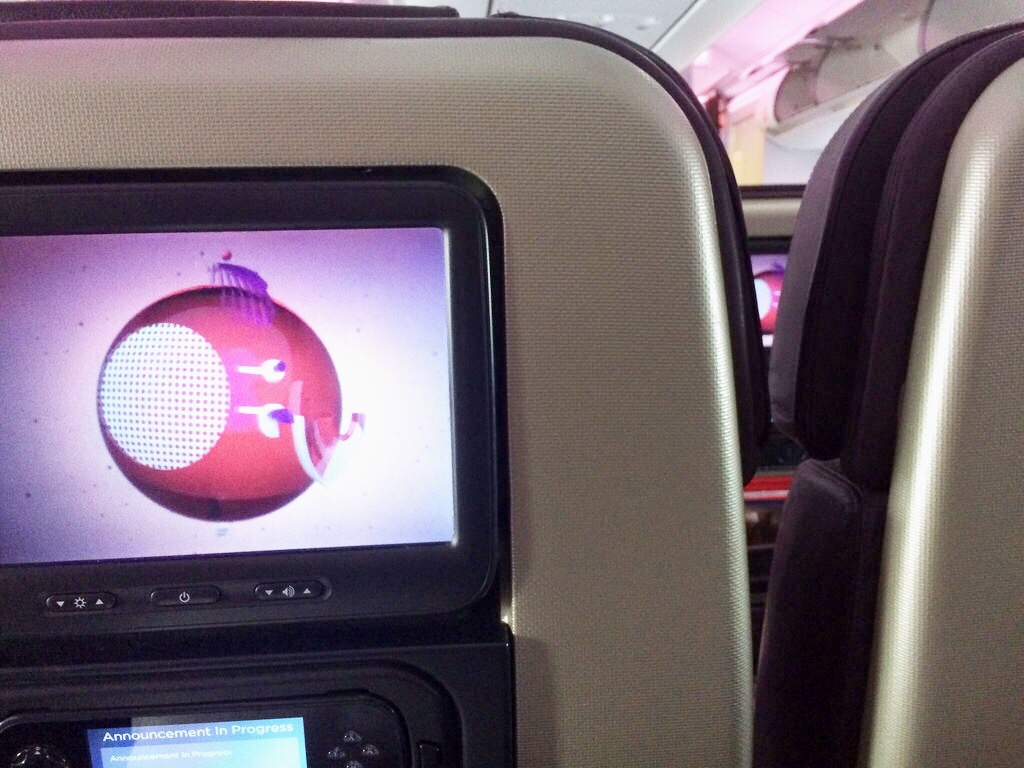 Virgin Atlantic – It’s tough to compare and contrast Economy Class sections on any airline because so many are so very similar. Cramped seats and bad food are cramped seats and bad food on every airline. But, there were enough differences between VA and BA to warrant at least a little analysis. The one thing I noticed on all of my Virgin Atlantic flights was the attitude of the flight crew themselves. There were happy, pleasant and nice to the passengers, a sad rarity nowadays. It must be thanks to the corporate culture, which speaks volumes and means that the end line passengers receive an experience found on few other airlines. The meals were fine, snacks adequate and whimsical and the small amenity kits a nice surprise in a world where Economy passengers are used to getting little or nothing except a chair to sit on. I also particularly like the Virgin Atlantic entertainment system. It has a large selection and enabled me to avoid doing work for a solid eight hours.

British Airways – I hate to keep picking on them, but their Economy Class experience was amongst the worst I’ve experienced in a very long time. Even though I flew on a 777, my favorite aircraft, the seats weren’t just narrow, they were hard and uncomfortable. I’m used to that though, that’s not uncommon, but once again I was presented with in-flight service that was well below my even modest expectations. Meal service was slow, staggered and confused. The crew ran out of meals, went back to the galley to get more but when they returned they forgot my row. Getting them to come back and actually serve me dinner took far too much effort than it should have. Nothing clicked and for the first time in a long time I wondered whether or not it was the flight attendant’s first day on the job. The entertainment system was pathetically bad with international titles I had never heard of much less had interest in watching. The flight experience was not a positive one, and rather than point to something like a chair or the poor quality of the food, I have to place a lot of blame on the crew. The bad food and lousy chairs would have been forgotten had I received better service. I did not, and that had the effect of greatly accentuating all of the other negative aspects of the flight.

By now you can probably guess that I much prefer Virgin Atlantic for traveling from the US to or through the UK in any class of service. From the back of the plane to the front, they maintain a level of service and quality that’s frankly hard to find in modern aviation. Plus it was just fun to be onboard, to joke with the flight crew, enjoy a surprise popsicle midflight and catch a quick nap en route to my destination. British Airways is an institution, however, their age, name and size guarantees that more people will fly with them than Virgin. But, if given the choice, I think when booking flights to London you should eschew modern convention, avoid the legacy airline in this instance and instead go for the upstart, for the airline who dares to have a personality and to be different. It’s not often we can enjoy our flying experiences from start to finish, so when given that chance why not take it?

What do you think? What are your experiences with these airlines?

21 thoughts on “Flights To London: Which Is Better – British Airways or Virgin Atlantic?”