When I was 22 years old, I spent the summer following college graduation traveling around the UK. It was my first time in Great Britain and was the culmination of years of planning. I had high expectations, and they were nearly all surpassed. Nowhere was this more true than in Scotland, a country I quickly came to love for many reasons, including its capital city – Edinburgh. Edinburgh is a special place and I’m certainly not the first to have fallen for its charm, style and history. For years I considered it to be one of my favorite cities in the world, but as the years passed and I failed to return I forgot about Edinburgh. I forgot why it was that I had fallen for it so madly back in 1998, so when I finally returned 17 years later, it was the perfect time to fall back in love with this great Scottish city.

Unlike my first trip to Edinburgh all those years ago, a dorm didn’t figure into my most recent experience. No, instead I opted for what is arguably the best hotel in town, the Waldorf Astoria Edinburgh – The Caledonian. An old railroad hotel, the elegance here may be old school, but it is also refined and infinitely relaxing. For me, location is everything in a hotel and I was thrilled with the central location of the Waldorf Astoria Edinburgh – especially since I was so limited on time. Getting to the Royal Mile and all of the central tourist sites really couldn’t have been easier, and made my brief stay in town as productive as it could have been. Around the hotel itself are plenty of shops, pubs and restaurants, offering options to guests who want to get out and explore. Any great hotel stay though is about the comfort and service, and I couldn’t have been more pleased with both. The hotel offers more rooms with views of Edinburgh Castle than any other in town and that was the first thing I noticed out of my own window at the hotel – a perfect introduction to the city and a sign that I had indeed truly arrived into Scotland. The room itself had all of the amenities one would expect, from Ferragamo toiletries to incredibly comfy beds and linens. Luxury hotels excel, or not, based on the details. Anyone can have the appearance of luxury, but what really makes a hotel stand out are the attention to minor details and the service. While my time at the Waldorf Astoria Edinburgh was brief, I saw ample evidence that they excel in both areas and everything comes together for an experience that is relaxing but productive – a perfect combination. 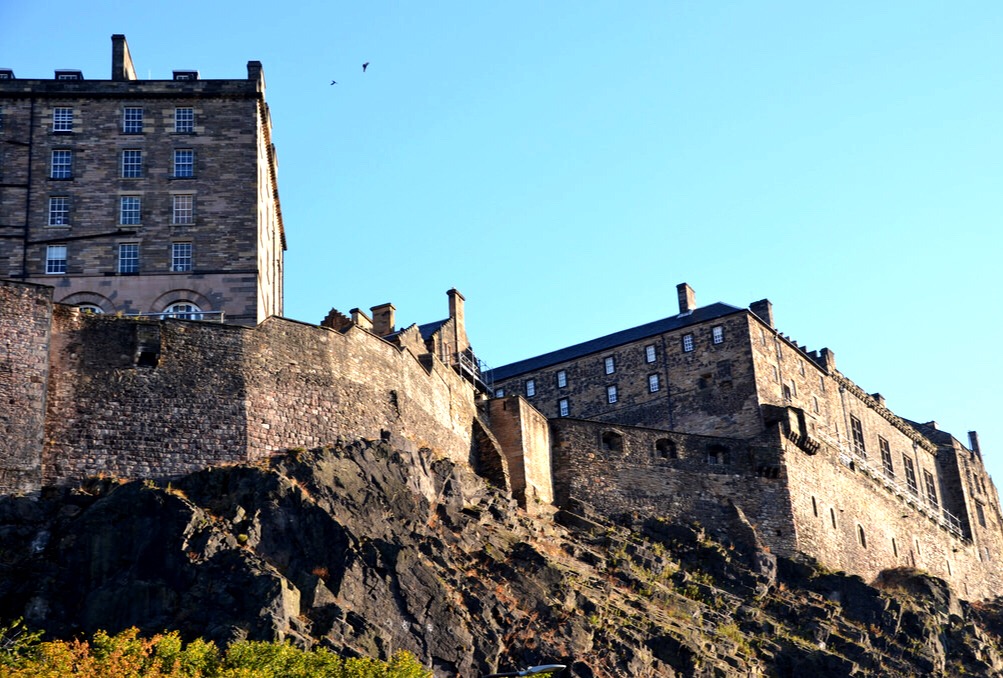 Seeing that old castle from my room at the Caledonian, I couldn’t wait to get out early the next day and revisit this, the most popular tourist site in town. Sitting on top of an extinct volcano, it’s hard not to be impressed by the black rock that looms over the city. There’s been a castle on the site since at least the 12th century and its role in the history of Scotland cannot be understated. If you know anything about Scottish history, you’ll know that much of it isn’t exactly positive, which is also why the castle is known as the most attacked in the world. Today it’s the top paid tourist attraction in Scotland, and spending a couple hours (or more) touring it is usually the first thing most visitors do. I couldn’t wait to once again walk around this impressive site; for me Edinburgh Castle defines the city and prowling through the large space is just a lot of fun. Castles are more than just one building, and instead are really small fortified villages. Walking around inside Edinburgh Castle visitors get to see many of these structures, but the most impressive sight isn’t technically at the castle itself. No, what I think is the best feature of the castle are the views it provides of Edinburgh. 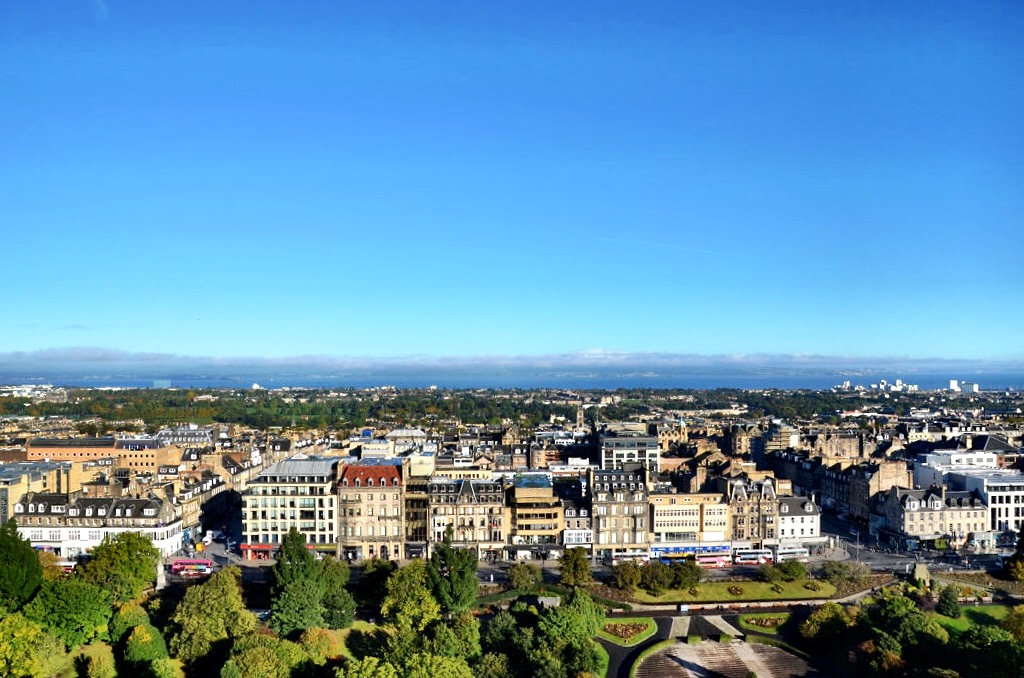 Sitting high atop that volcano, you can see across the Old Town, following the path of the Royal Mile and in the other direction you can see the stately homes of New Town with the Firth of Forth in the distance. It’s an impressive view and that alone is worth the price of admission. Back inside the castle, there are guided tours but I opted just to wander alone, re-learning the history of the castle and Scotland along the way. The most prized part of the estate are the Scottish Crown Jewels, well explained and well protected ever since they were reclaimed from the British Royal Family. They are largely representative of the tough history Scotland has endured, and a great way for visitors to learn about and appreciate that history. 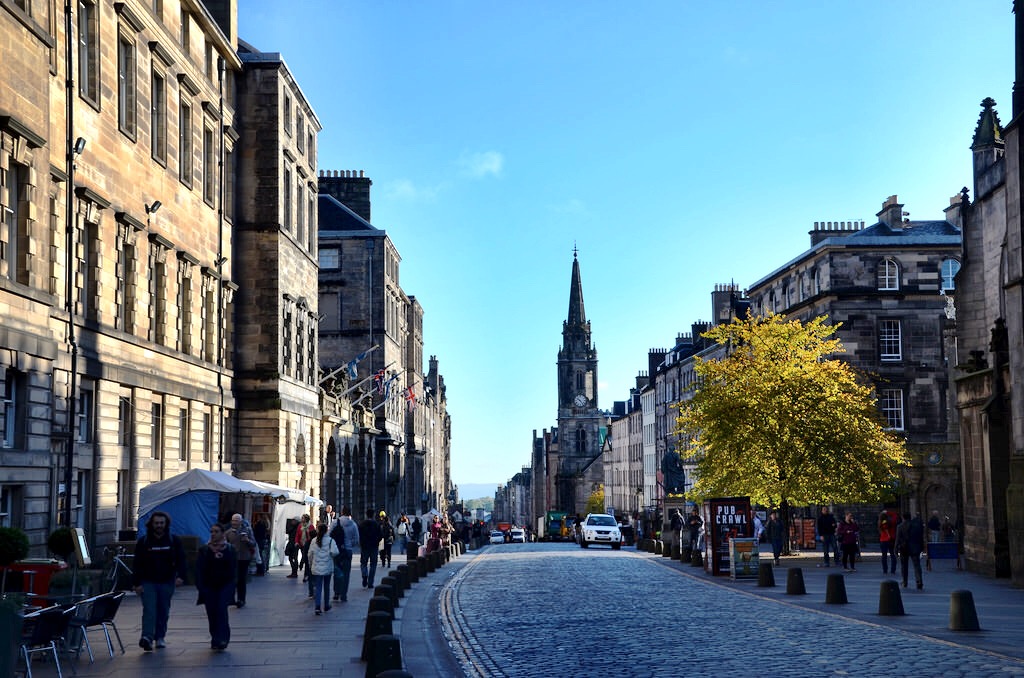 Leaving Edinburgh Castle, I made the easy walk down the thoroughfare known as the Royal Mile. Bookended by Edinburgh Castle on one end and Holyrood Palace on the other, this is the most popular mile in the entire country. Along the way you’ll discover museums, shops and restaurants in numbers that can be at times mind-boggling. Kilt wearing bagpipers line the streets, adding to the Scottish feel of the experience, while hoping to earn some extra money from passersby. I made a slight deviation and decided to visit Greyfriars Kirk and the famous monument to Greyfriars Bobby. Although many notable Scots are buried in the cemetery surrounding the church, it’s a small Skye Terrier that still brings in massive crowds. 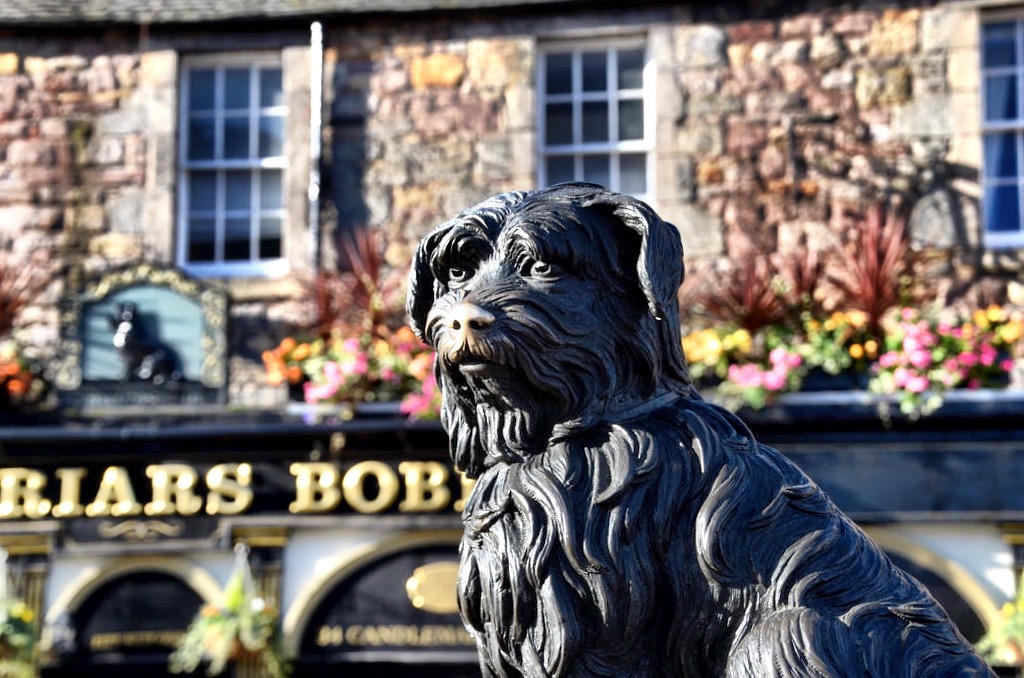 In the 1860s, a night watchman named John Gray died and was buried in Greyfriars Kirkyard. His dog, Bobby, spent the next 14 years of his life sitting on his master’s grave. Adopted by town leaders, he was allowed to remain at the grave and even received an honorary license and collar. Once he passed away, he was buried just inside the gate of the graveyard not far from his master’s grave and a year later, the famous memorial was erected in his honor.

Returning to the Mile itself, I was reminded of the great architecture on display, one of the many reasons why I love the city so much. The classic grey stone is ubiquitous throughout Old Town and many ancient homes and business exist next door to much more recent additions. At the end of the Mile sits both the Scottish Parliament building and Holyrood Palace. The two couldn’t be more different from each other; the Parliament is modern architecture at its strangest, while Holyrood is classic Royal elegance. Tour both to learn about two very different aspects of Scottish life and culture. 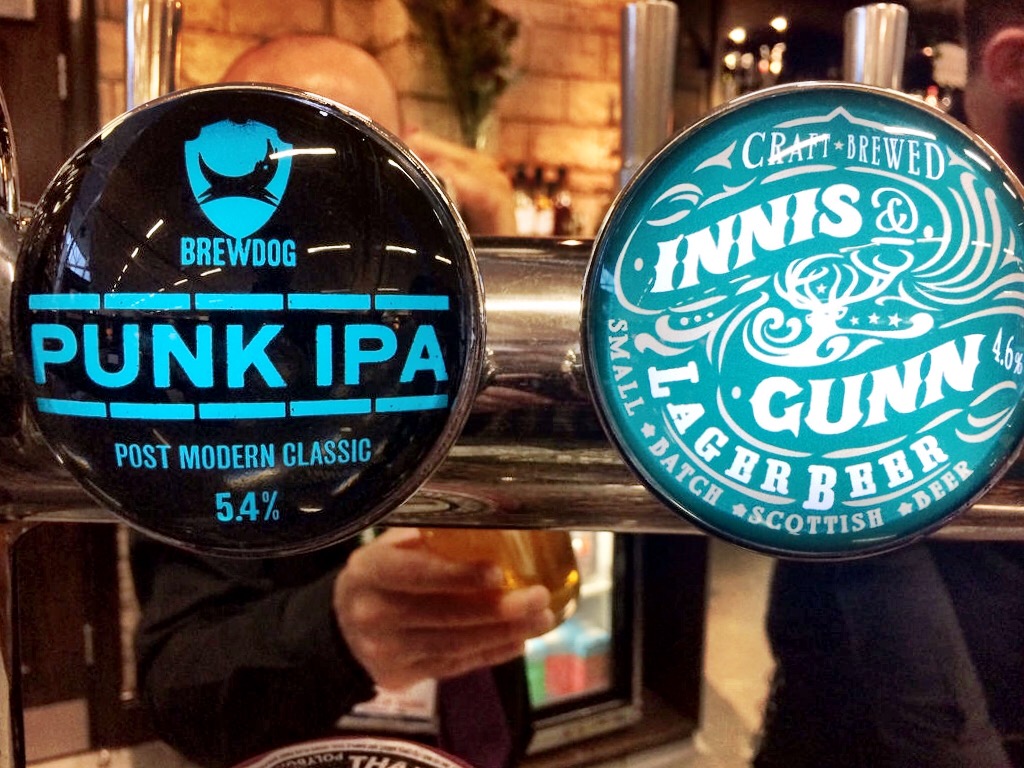 The Scots don’t suffer from a lack of places to enjoy a pint or a good meal, and you’ll find both in ample quantities throughout Edinburgh. Spend some time researching the types of restaurants you’d like to visit before jumping right in. The choices can be daunting and I for one always suffer when overwhelmed with too many options. I arrived late and was tired but starving, luckily for me though one of the best pubs in town is right across the street from The Caledonian. Ghillie Dhu is a dramatically vaulted Georgian hall that hosts many events throughout the year, but is also a decent pub and restaurant in its own right. It embraces all things Scottish, so I was a little nervous that it’d be a tourist pub, but was happy to see I was the only American in the place that night. Sitting back, watching whatever match was on the TV and enjoying an evening of comforting Scottish pub grub was the perfect antidote to the chilly night outside.

If I’d had another night in town though, I would’ve made sure to visit the Beer Kitchen. Owned and operated by the edgy and popular brewery Innis & Gunn, this new establishment is something entirely new for Edinburgh. The Beer Kitchen is meant to bring the craft beer experience to the masses, delivering fresh beer from the brewery every day. The food mimics their commitment to the beers, using fresh and locally sourced ingredients to create dishes like the Haggis Donut and the classic Chicken and Ham Hock Pie. 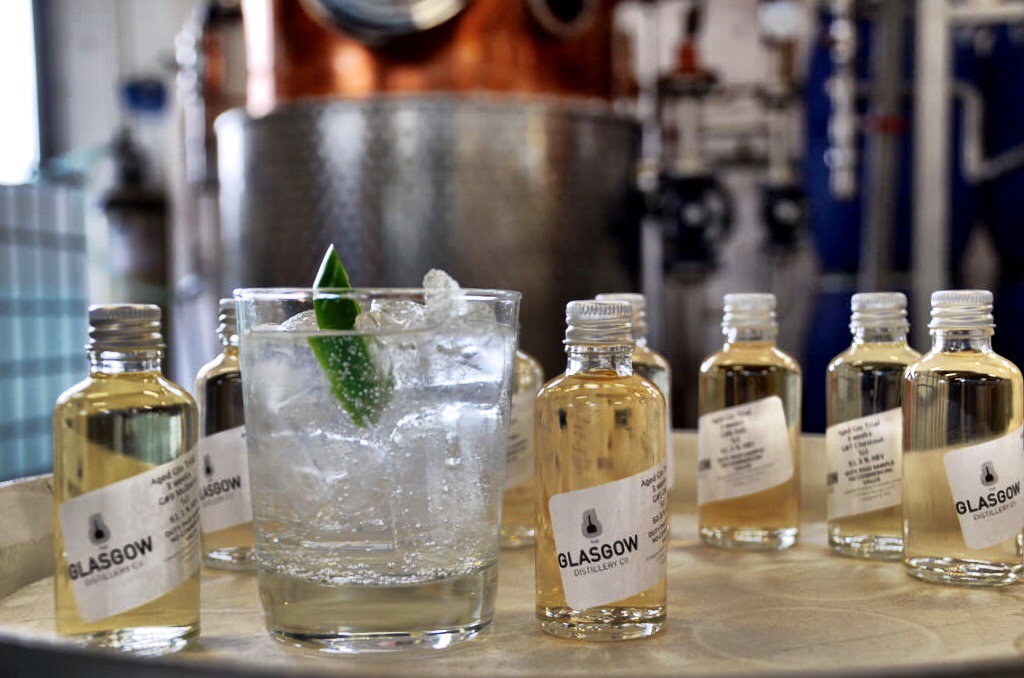 It wouldn’t be Edinburgh though if you didn’t include an evening out on the town, and since 70% of all British gin is produced in Scotland, be sure to spend an evening patronizing at least one gin bar. One of the best in town is Mothers, featuring more than 100 gins and a knowledgeable staff eager to answer any questions you may have. Since there are so many gin options, a few I would recommend include: 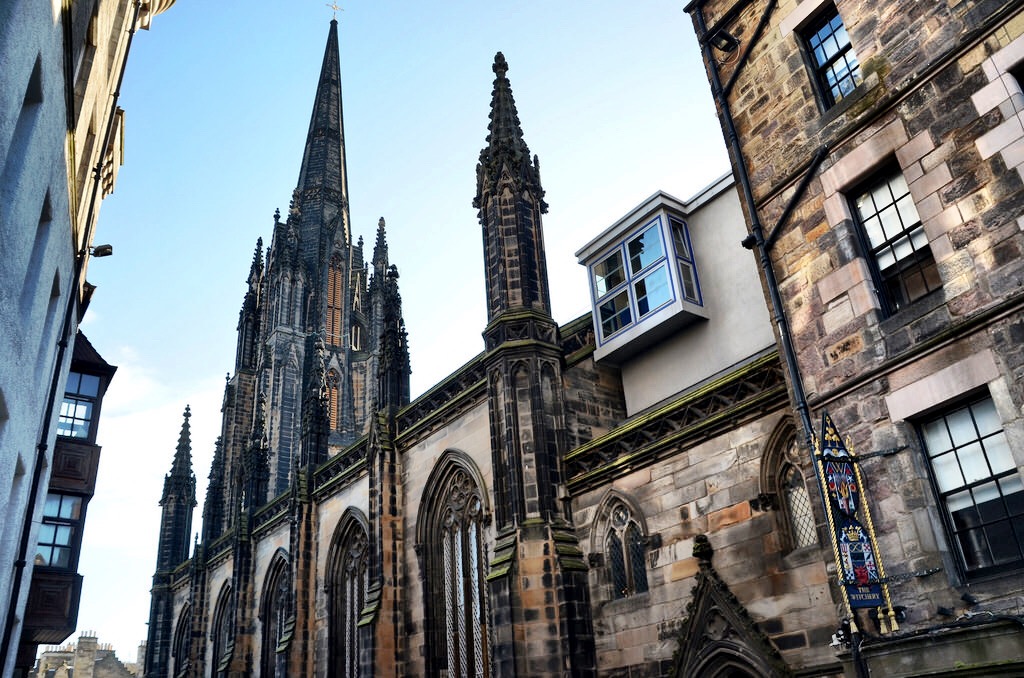 For me, I never know when travel love will strike. Even worse, I have no idea what spurs on these love affairs I’ve had with cities around the world. Edinburgh was one of my first though, and once again wondering those cobblestone streets of the Old Town and marveling at the stately homes elsewhere, I was reminded of the strength of that love. There’s just a spirit in Edinburgh that draws me in, making me never want to leave and I love that. I love that I have such a strong connection with a city I haven’t visited in nearly two decades; if anything it further proves the intensity of these travel love affairs. Although I have no idea where my love of Edinburgh comes from, there’s no denying its strength and because of that, along with a host of other reasons, I truly hope that it doesn’t take me another 17 years to return.

1 thought on “My Day Falling Back in Love With Edinburgh”