I’ve written a lot so far about Alberta and more specifically Jasper National Park. Today though I want to feature the town of Jasper itself, the home base for anyone who plans to spend time exploring this beautiful part of Canada. It’s a quirky but endearing little place, obviously geared towards the hundreds of thousands of tourists who stream through it every year. But it’s not your typical ski town or park village, it’s different; it somehow has a spirit to it that I haven’t found in other similar towns around North America. I spent a few hours poking around town, not just the shops and restaurants along the main street, but also exploring the natural resources just a few minutes drive away and this is what I found.

No offense to Jasper, but if I were to guess I would say that most visitors to this small town in the middle of Jasper National Park are there to experience the beauty and wonders of the park itself, and maybe not the town specifically. Regardless of what actually brings all of those thousands of people to Jasper every year, it is the only home base in the park and that means everyone must spend some time in and around town; eating, sleeping and of course exploring. Jasper National Park is huge and from personal experience I know just how amazing a world wonder it is, but that’s not to say that visitors shouldn’t spend some time in the town of Jasper itself. Both in Jasper and very close nearby, there are some great experiences to be had and it all starts with the town.

Originally established in the early 19th century as an outpost for the fur trade, it was when the train arrived that services arose bringing life to this still very small town. Jasper has around 4,000 year-round residents, although of course this number fluctuates and the look and feel of Jasper is very different in the summer than the dead of winter. First time visitors will see a town that is reminiscent of other mountain tourist towns with plenty of restaurants, shops and other ways to spend an afternoon. Surrounding Jasper though is the reason you are there; the mountains and rivers abut Jasper reminding you right away what makes this part of the world so very popular. Jasper also sits at a crossroads; the road to Maligne Lake is nearby, as is the Icefields Parkway making this the perfect park outpost for anyone driving through. 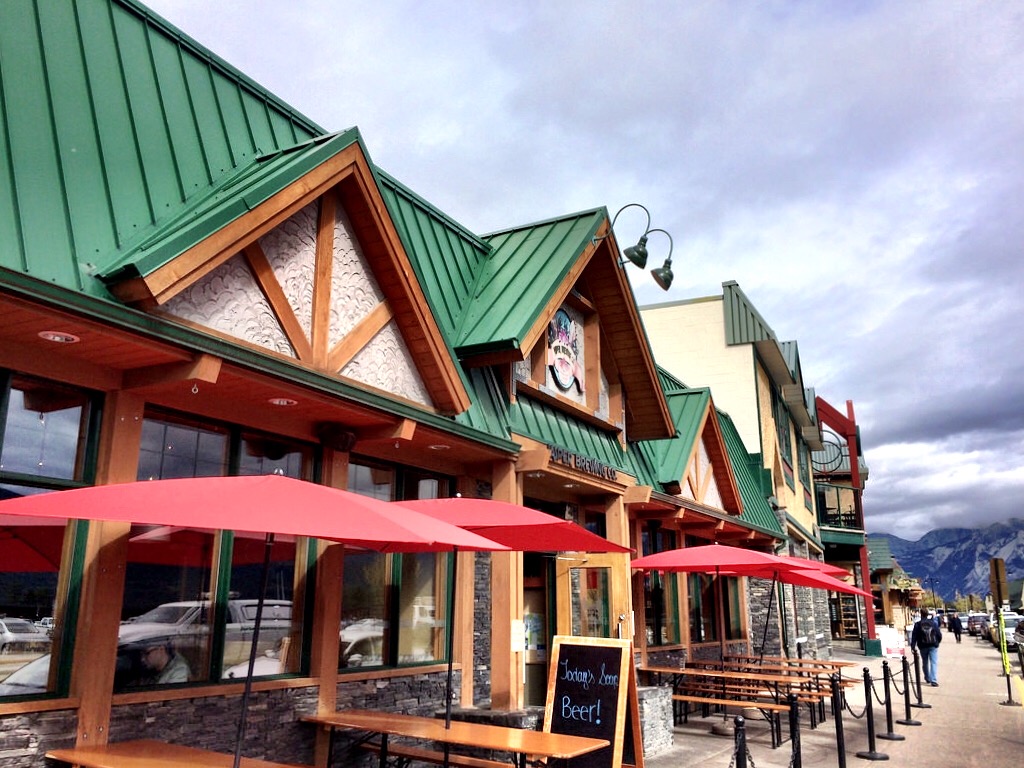 I spent an afternoon exploring Jasper and found myself enjoying the quirky town, even being impressed by the food. That’s one thing I love about communities like Banff and Jasper, the restaurant choices are usually pretty great and in Jasper one of the favorite hangouts for locals and visitors alike is the Jasper BrewPub. Opening in 2005, the Jasper Brewing Co. was Canada’s first National Park brewery and for all visitors to town, it’s a great way to taste the best this part of the world produces. Using artisanal methods, along with nearby glacial waters, the resulting beers are fresh, modern and tasty. Also tasty is the food at the BrewPub, which is what brought me in through the doors for an early lunch before leaving town. Unlike so many other similar pubs, the folks in Jasper treat the food with as much care as their beer and while you’ll see some traditional classics on the menu, you’ll also find smart, well-executed and even creative dishes. Rye whiskey popcorn, steamed edamame and bison curry may not be regular pub grub, but they’re delicious and help make the overall dining experience at the BrewPub a must for anyone driving through town. 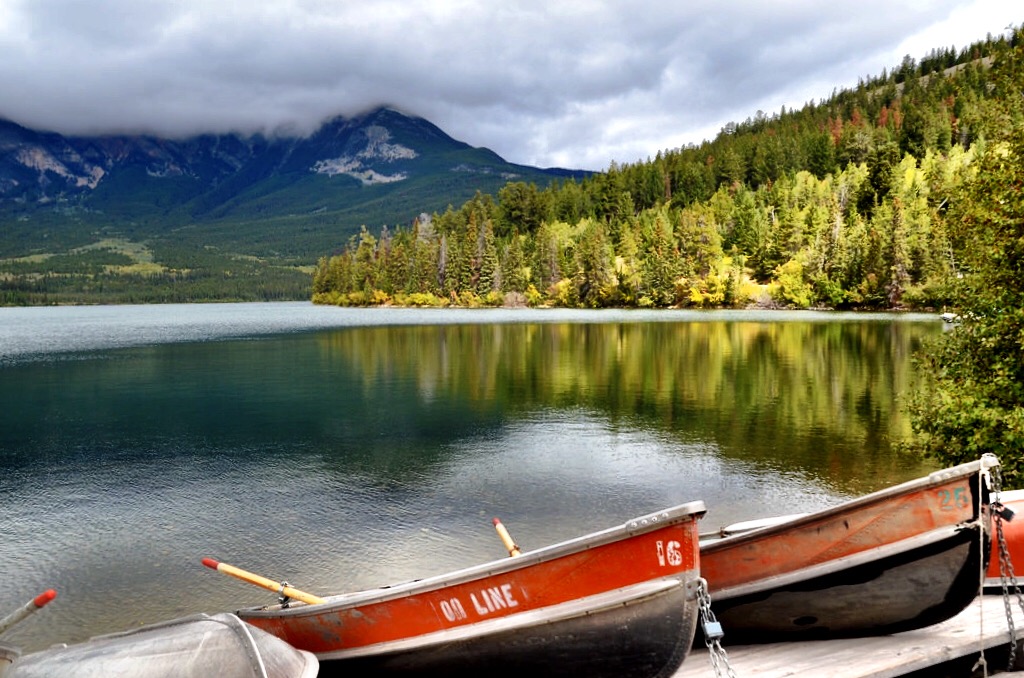 Of course it’s hard to be surrounded by all of that nature and not go experience it. Luckily there are plenty of hikes and beautiful sights within just a few minute’s drive of downtown Jasper, including Pyramid Lake. Literally only a five-minute drive away, Pyramid Lake sits at the foot of Pyramid Mountain, an impressive triangle-shaped landmark overlooking the town of Jasper. If you’re a hiker, there are many great trails in and around the lake, even ones connecting back to the town of Jasper. Most of the hikes not only here, but throughout Jasper National Park are well-signed, including trail maps with time estimates to help you decide if the hike is a good match for you or not. This is also a really popular picnic spot and I could see why; it’s hard not to be wowed by the impressive lake and mountains, even if you’ve seen many others while exploring the massive National Park. 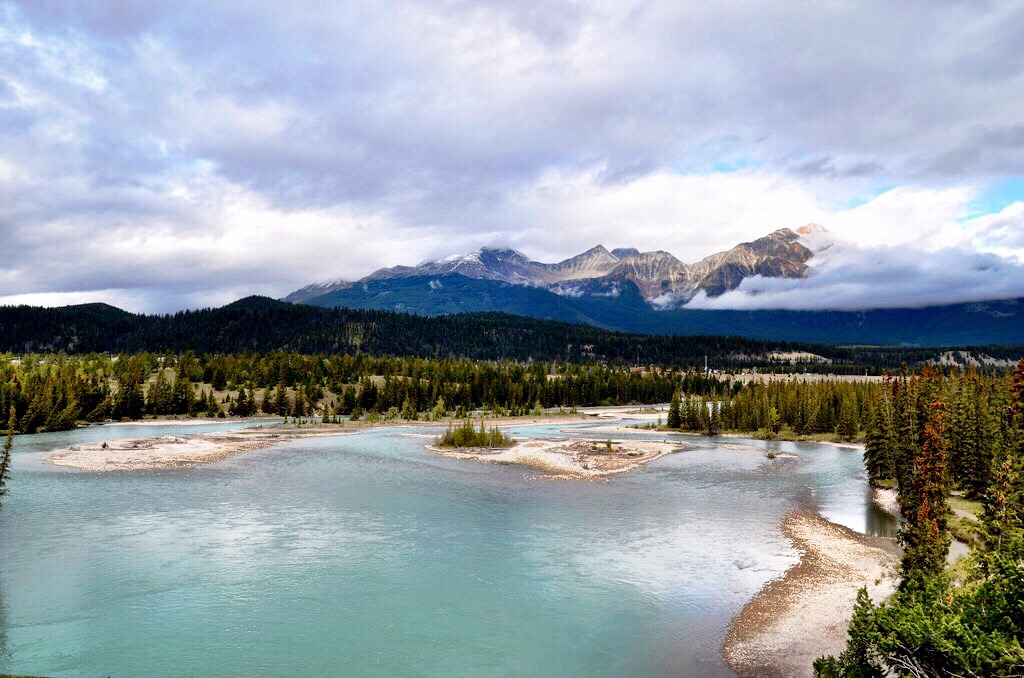 This was my favorite close-to-town activity and it’s one I almost didn’t do. Another very short and easy drive from the middle of Jasper town, this lookout point provides that classic view of Jasper and the surrounding area that you’ve probably seen in countless books and online. Be forewarned though, this loop trail is definitely challenging and isn’t for the faint of heart. Well, unless you do it the way I did. I was short on time, so I didn’t do the 4-kilometer loop and instead made up my own short hike. Starting at the wooden stairs near the parking lot, almost right away the views come into sight and they egged me on to keep hiking up the steep and at times slippery path to the summit itself. The trail is well defined and it’s definitely steep, but once again the rewards were well worth the effort. Once I reached the top I was met with one of the best views I’d experienced during my time in Jasper National Park, which is saying a lot honestly. Not only is the entire town of Jasper easily seen, but so is the nearby river and surrounding mountains creating a rich tableau that instantly gave me so much respect for the beauty of this wonderful part of the world. 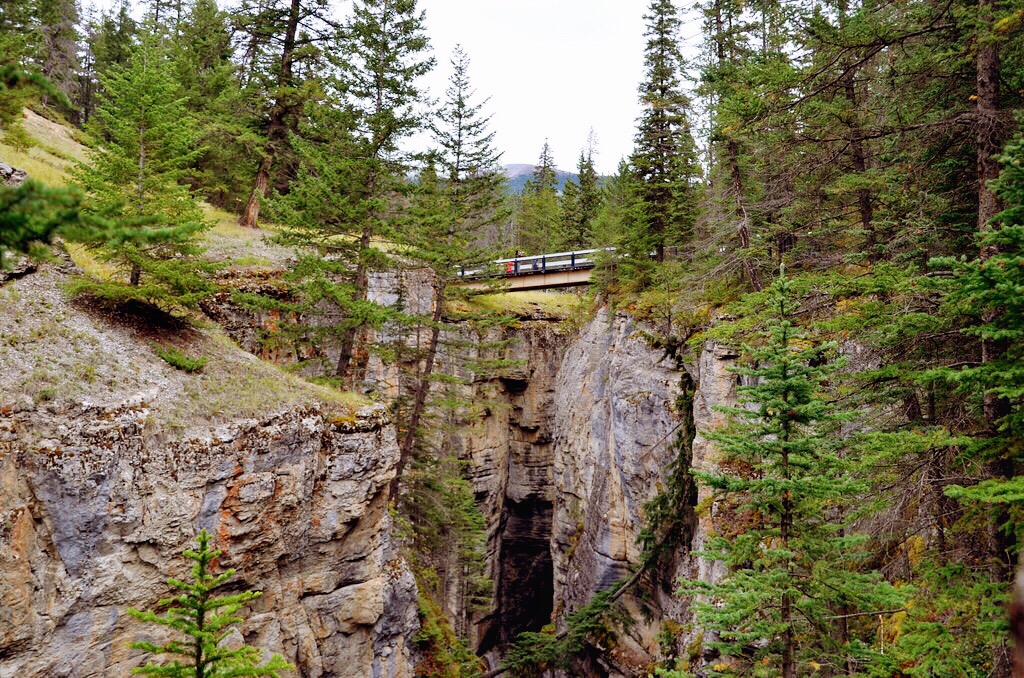 This was not my favorite hike, but that’s also probably because I didn’t do the whole thing. I’m envious of visitors who can devote an entire day to each of the many day hikes around the park, but that wasn’t me and so instead I spent a scant 30 minutes at the canyon, trying to see and do as much as possible in that short time frame. Known as one of the most spectacular gorges in the Canadian Rockies, its sheer limestone walls fall to incredible depths that attract hikers at all times of year, believe it or not. A series of bridges along the hike provide increasingly gorgeous views of the canyon and the thundering river, and it really is considered to be one of the most interesting hikes in the park.

This unusual lake is easy to visit, and most people driving along to Maligne Lake will stop and spend a few minutes admiring Medicine Lake whether they realize it or not. It’s also an unusual lake, because underneath the lakebed itself is a series of natural drainage systems, which means at various times throughout the year, the lake is empty. Whether or not you visit when it’s full of water, mud or nothing at all, the mountains surrounding it and the virgin forests beyond all come together to create not only one of the most impressive views in the Canadian Rockies, but one of the most iconic as well.

Close to Jasper is one of the biggest draws of the National Park, the Icefields Parkway. Celebrating its 75th anniversary this year, the Parkway is one of the best driving routes in the world and a must-do experience for all visitors. Winding from Lake Louise to Jasper, it connects the parks and for most people it’s how they travel along the gorgeous Canadian Rockies. If you’re staying in Jasper though, it’s still easy to explore most of the Parkway, although you may want to split it up into a few days. One of the biggest tourist draws along the Parkway is the Columbia Icefield with its massive glacier that you can actually visit and walk on. There are also many great lookout points and hikes, some of which I’ve already written about and all of which are well worth your time to do. That’s why it’s important to spend several days exploring the Parkway, not for the driving time but for all of those incredible stops along the way.

Jasper National park impressed me in nearly every way but at the center of my experience was the small and quirky town of Jasper; including everything there is to see and do around it. When you visit, don’t limit your time in Jasper itself, be sure to add it into your itinerary and discover for yourself what makes it such a great town to spend some time exploring.