When I first heard about the Icefields Parkway images from the TV show Ice Road Truckers immediately came to mind. Even though it was the tail end of summer, I imagined ice-covered roads trundling through the mountains of Alberta. I was wrong, but not too far off as it turns out. No, instead of ice-covered roads I discovered not only one of my favorite drives in the world, but a stretch of road so scenic that it should rank amongst the most beautiful anywhere in the world.

The entire Icefields Parkway is long, stretching from Lake Louise to Jasper it’s a 140 mile stretch of road that was completed 75 years ago this year. My time exploring Jasper National Park was short, too short really, and while I didn’t have the time to drive the entire length of the Parkway, I was able to discover a huge swathe of it as I drove out to the Columbia Icefield for a fun and active glacier experience. I knew how special the drive would be though, and planned on fully exploring it on the way back to Jasper, as smart a decision as I’ve made in a long time. 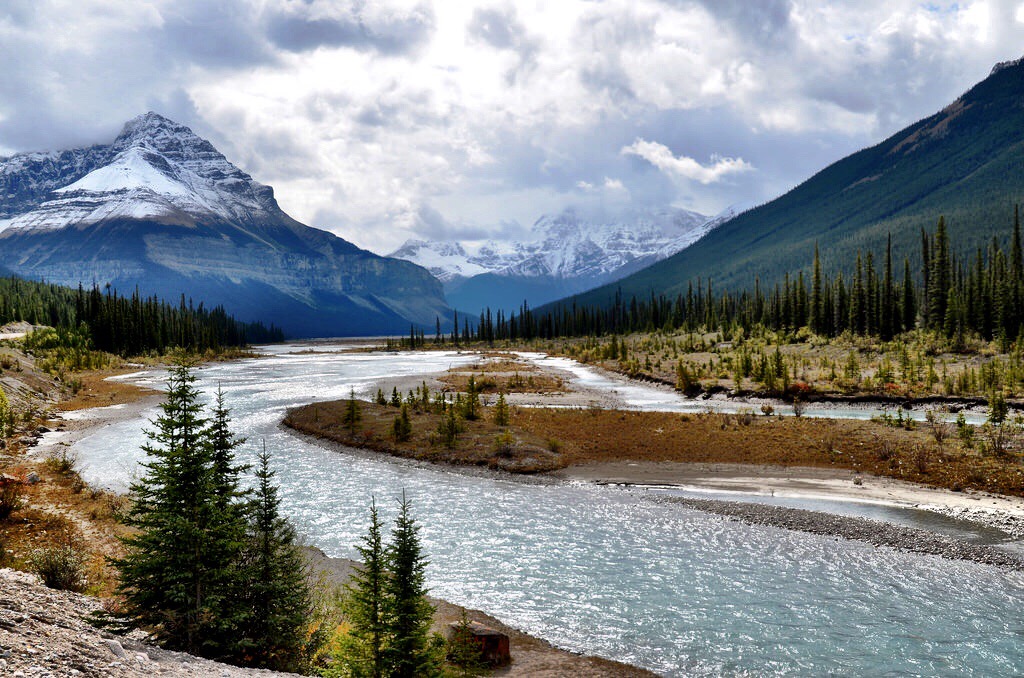 I had already braced myself for an improbably scenic drive; the day before driving into the National Park was stunning and I could only imagine what delving further into the Rocky Mountains would be like. But nothing at all prepared me for the scale of the beauty. From strangely-blue glacier fed lakes and streams to massive mountains capped by snow in the distance, every fiber of my being wanted to stop every couple of minutes to take photos and soak in the beauty surrounding me on all sides. The only other time I’ve experienced something like that was in New Zealand, driving from Greymouth to Franz Josef on the South Island. It was the same sensation of natural perfection that is all consuming, and not just a random occurrence. Every inch of those 140 miles are gorgeous, stunning and whatever other adjective you’d like to use. And just like in New Zealand, I had to make the conscious decision to start ignoring the beauty, at least for a little while. There’s no other choice really, it would take days to drive the Parkway otherwise, not to mention the complete lack of attention I was paying to the road.

I was also on a schedule and needed to arrive in time for my glacier tour of the Athabasca Glacier, one of the highlights for any visitor to the Parkway. I got there as soon as the facility opened that day, but already it was packed with people. So when you do visit, make sure you give yourself more than enough time not just to explore the glacier, but then to fully explore and appreciate the beauty of the Icefields Parkway itself.

Stocked up on snacks and a steaming hot cup of coffee, I left the too-cold-for-September Columbia Icefield and set out to explore all of those stops along the Icefields Parkway that I had skipped on the drive down. And there are a lot; too many really to reasonably do in a single day. If I were to well and truly experience all that the Parkway has to offer, I’d make sure to return several times over the course of many days, but since I didn’t have that luxury I did the next best thing and picked a few of the highlights to more intimately explore. 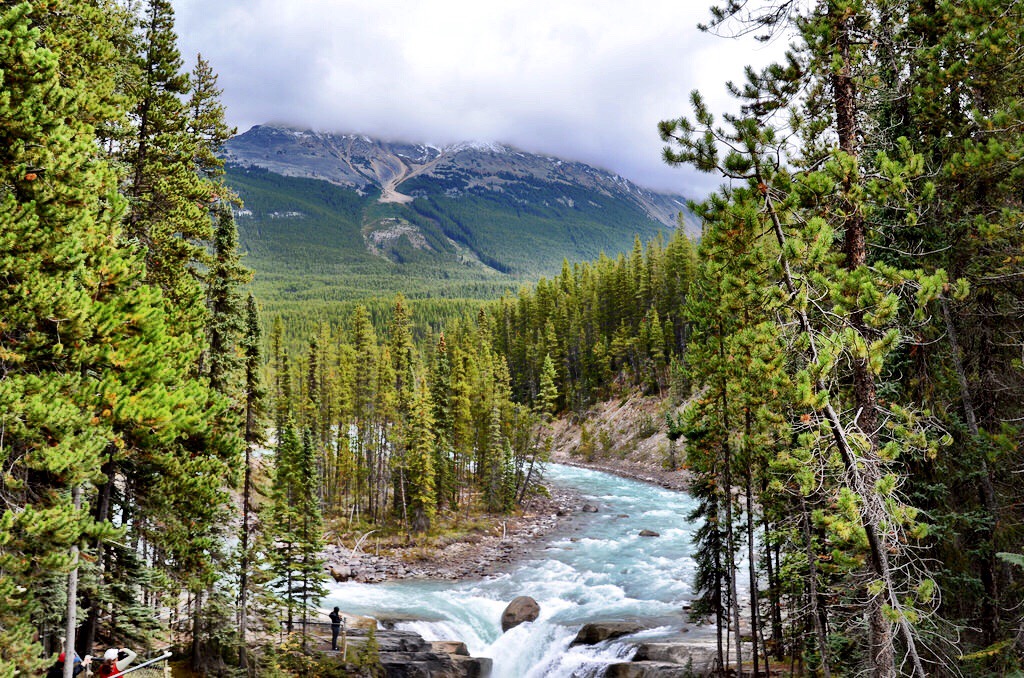 Given the geography and geology of the Canadian Rockies, there are a lot of waterfalls in all shapes and sizes, but a few seem to be extra special and this is one of them. It was also insanely popular and not for the first time I struggled even to find a place to park so I could start exploring the falls. Like many of the stops, visitors can spend as little or as much time as they want; a collection of hiking trails around the falls provide different angles and views and not for the first time I realized how perfect the entire Parkway is for the day hiker. My tip is to walk across the footbridge at the falls for a better view, and to better see the tiny island of trees just before the falls. 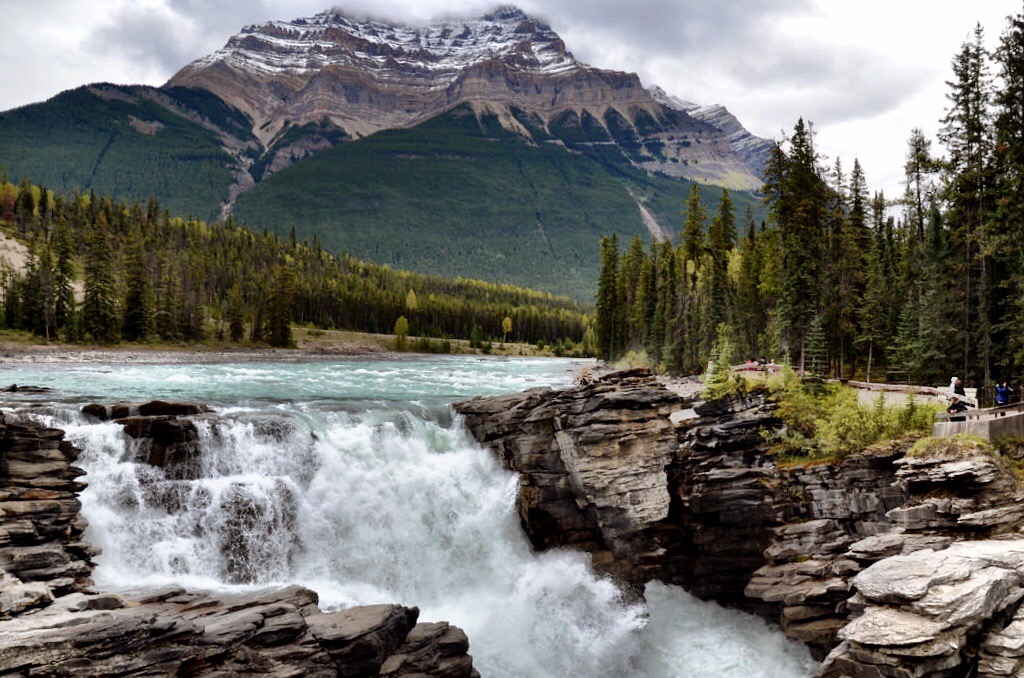 Not far from Sunwapta is another picturesque waterfall, Athabasca Falls. Known more for its force than height, the massive amount of water falling through the gorge is a great way to grasp the beauty and power of nature. It’s hard not to feel somewhat insignificant looking at the Athabasca, but in as good a way as possible.

Valley of the Five Lakes

The real highlight of my day though was an expected one, and one I almost didn’t even do. As amazing as this hike along the Parkway is, there’s very little information either at the site itself or online describing it, which still baffles me. The signpost revealed little except to provide a map of the hiking trail and an estimation of how long it’d take to accomplish. Two to three hours is what the placard guessed for the hike, but that was time I didn’t have. I had a dinner reservation I couldn’t miss but I kept thinking about a picture a friend had sent me. It was a queerly colored green lake surrounded by mountains and trees in the distance. It was one of the five lakes and I knew I just had to see those emerald lakes for myself.

While I like being out in nature, I wouldn’t necessarily call myself outdoorsy and I’m definitely no hiker. I told myself I’d just hike out a little bit to see just how far the lakes were and then decide whether to go on or head back to my car. That sounded better in theory than in practice because 30 minutes into the hike I hadn’t seen a lake yet, but I felt as if I was close and so I decided to just go for it. When was I going to ever be there again? Maybe never, and I wanted to see those damn lakes. Within an hour of making that decision, I understood it to be the single smartest decision I made during my entire trip to Alberta. 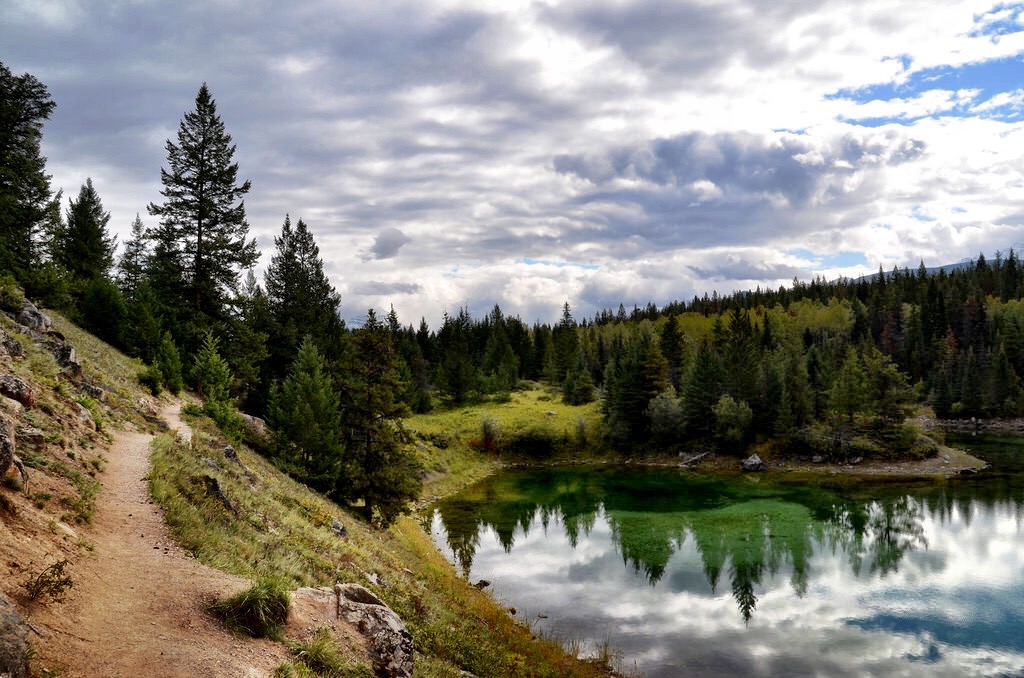 There are indeed five lakes, each in varying shades of green and blue. The colors are unlike anything I’ve ever seen in nature and come from the glacial rock dust that colors all of the lakes and rivers in the area, along with special algae and other factors. The instant I saw my first lake a broad smile crept up and stayed there, permanently affixed for the remainder of the hike. It was stunning, unlike any other natural experience I’d enjoyed before and no words or turns of phrase will do them justice. These lakes should grace the cover of every travel magazine out there; they should be on every Must See list and should be just as famous as any other natural wonder in Canada. It’s safe to say that embarking on the hike was a good idea. I plan on devoting a full photo series to these beauties, but hopefully the photos here share just a little bit of the massive beauty contained within. 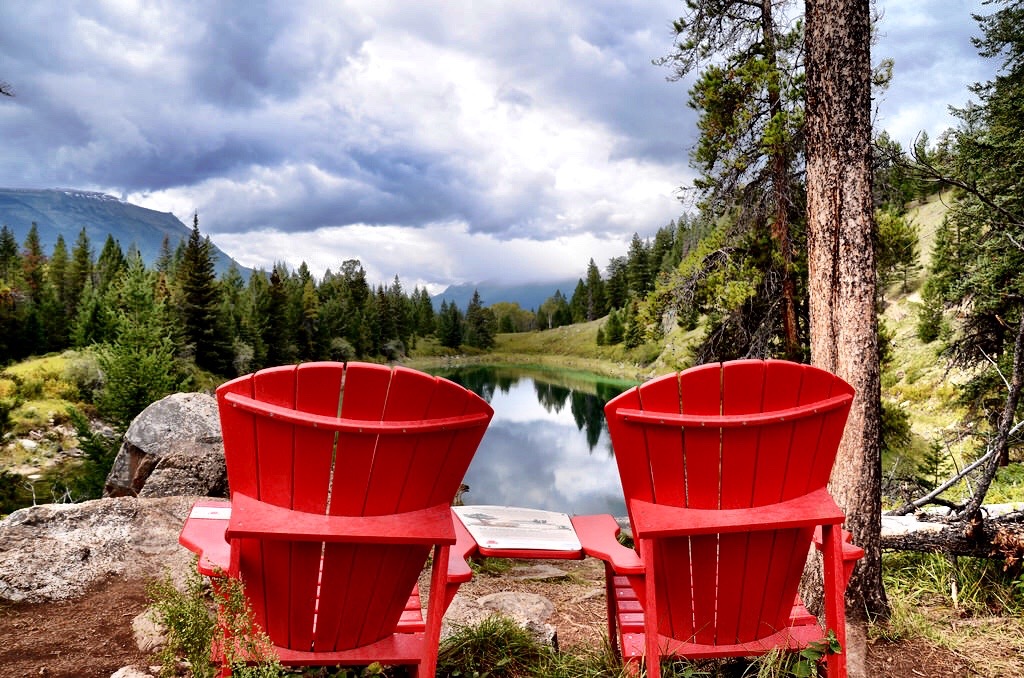 I was looking forward to exploring the Icefields Parkway and my expectations were honestly very high. Having been to Alberta before, I knew that the experience would be a breathtaking one but as I’ve written in this post, I wasn’t prepared for the scale or proportion of that beauty. Thank goodness there weren’t many cars on the road that day as I trekked from Jasper along the Parkway, because I would never have seen them. I was far too focused on the soaring mountains and scenic vistas that looked as if they were plucked from an LL. Bean ad. Nothing was amiss, everything was natural perfection at its finest and it’s for all of these reasons and more that I can say without hesitation that driving the Icefields Parkway wasn’t just one of my favorite drives anywhere around the world, it was also one of my favorite travel experiences. Jasper National Park is a very special place and this stretch of road that runs through it is surely one of the many highlights it enjoys.

3 thoughts on “Driving The Impossibly Beautiful Icefields Parkway in Alberta”