Egypt is just one of those places where special moments seem to be found around every corner. The country enjoys an embarrassment of riches when it comes to ancient sites and beautiful monuments. For a travel and history nerd like myself, it is the ultimate in travel experiences and while I enjoyed every second of my time in Egypt, there is no doubt that one of the most special experiences was also one of the first I had in the country.

Whether with a group or not, there are many different ways to tour around Egypt but at some point, most tourists will visit the same important sites. I was traveling with the luxury tour provider Insight Vacations, and our first stop on what became a remarkable trip around ancient Egypt was at the legendary temples of Karnak and Luxor.

Arriving into the parking lot of Karnak early in the morning, ours was the only bus there. I didn’t think a lot about it at the time, there were plenty of smaller groups around, but our guide stopped immediately and pointed around us. He said that a few years ago this lot would have been full, but was today just one more example of the dramatic loss of tourism this country has seen and redoubled my beliefs why it’s important to visit now not just to see these amazing sights, but to help Egypt pull itself back up.

Like many of the ancient Egyptian sites, Karnak is large and built into a series of gates and public spaces. I won’t go into the minutiae of each one – truthfully it takes a long time to really learn about and appreciate the significance of everything, but I do want to share two important moments I had while exploring Karnak. One of the largest religious complexes in the world, walking into the first gate of the temple is an ancient walkway flanked by dozens of sphinxes on either side. Slowly approaching and looking up at the great and oversized entrance I couldn’t help but feel humbled, just as I’m sure the ancient Egyptians were thousands of years ago. That was the point, after all, to shock and awe; to show the power and strength of both the gods and rulers, usually one and the same. The fact that I am still able to take the same approach, to feel the same sensation of wonderment and intimidation is amazing if you stop and think about it. To be able to project these feelings across the ages is just more proof of how incredible and intensely powerful the ancient Egyptians were and it sent shivers along my spine. 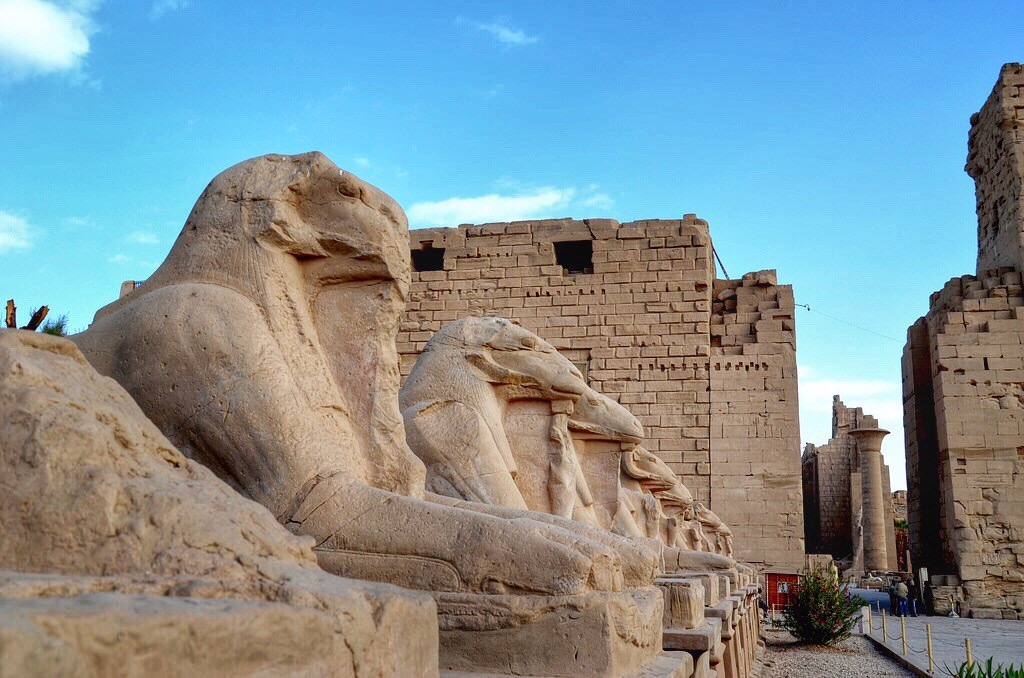 The second special moment was a purely aesthetic one, and happened as I walked around the labyrinthine Great Hypostyle Hall – Karnak’s most recognizable monument. The massive hall once had a roof that while now gone, was supported by the 134 columns in 16 rows still found there today. When it was built the entire area was richly decorated, and the vibrant colors must have been a wonder to behold in a part of the world where browns are the normal colors of daily life. You can see these colors still both on the columns and the lintels hanging high overhead. Not for the first or last time I stood there, looking up with jaw agape and wondered how, how after millennia of wear and tear and eventual entombment by sand that standing there in 2015 I could still see the colors of the artwork just as if they were painted yesterday. It’s a sensation you’ll never be able to capture in a museum, it’s something that has to be experienced there at that place among the original ruins of this mighty temple.

Not far from Karnak, and almost always visited on the same day, is another impressive Egyptian temple: Luxor. Instead of finding yourself in some far flung and lonely place, the temple is in the middle of the present day city of Luxor, what was once known as Thebes. Maybe it’s just me, but the fact that there has been continuous habitation here since the time of the ancient Egyptians is incredible and I don’t think any of us can really appreciate the weight of history that sits on this otherwise innocent looking temple. Over the years of course sand and the city encroached on the Luxor temple to the point where it was completely covered. You can still see this curious mix of modern with ancient walking through the temple as homes and even a mosque are actually part of the old complex itself. 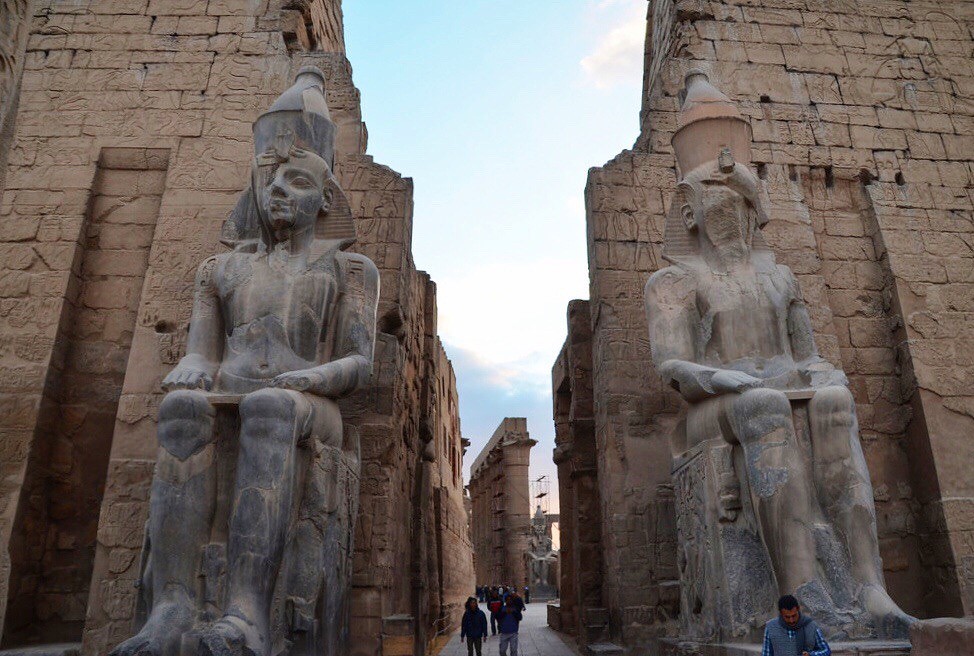 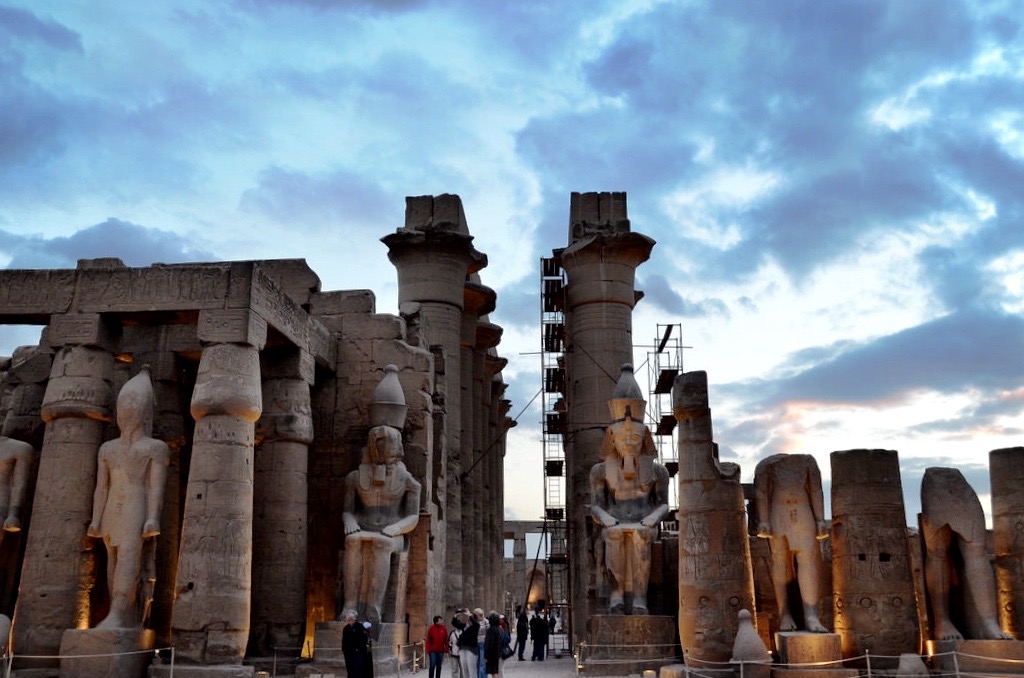 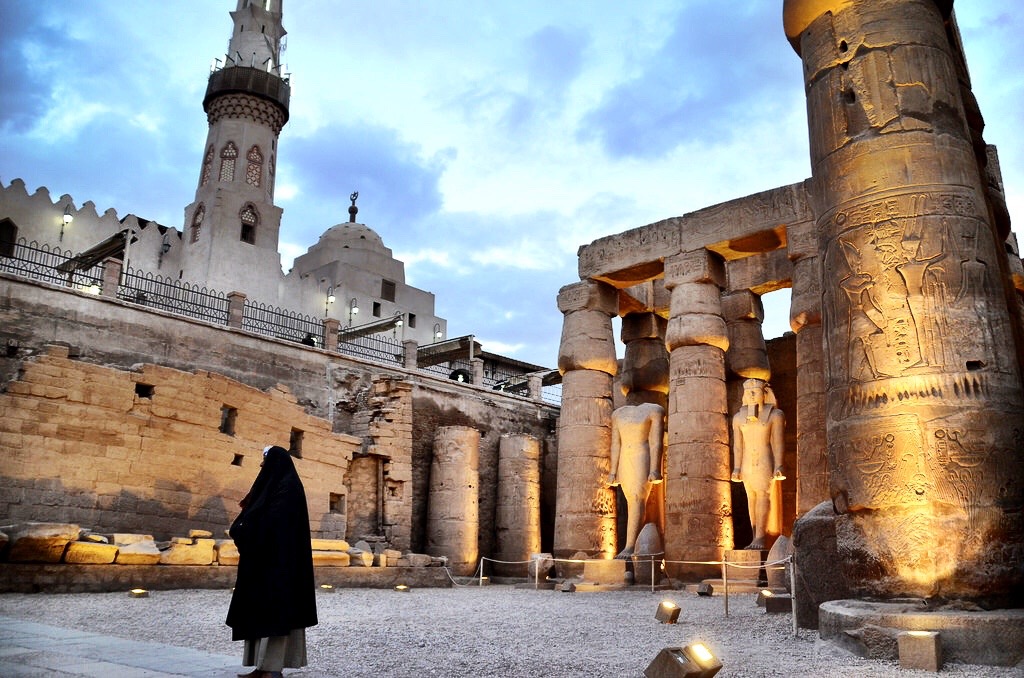 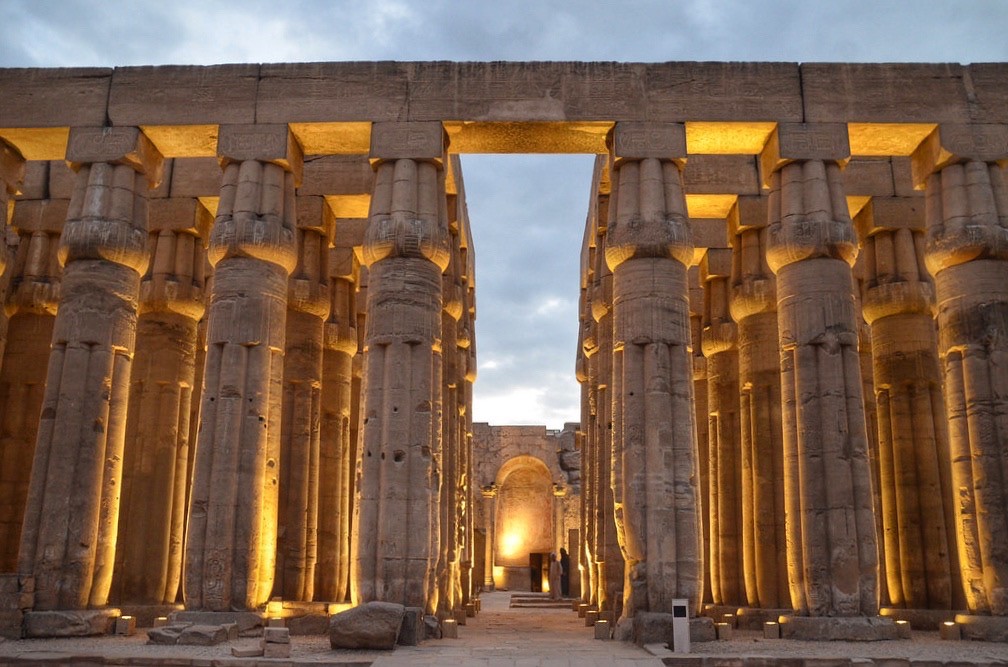 Never ones for missing an opportunity to impress, the entrance to Luxor is just as dramatic, maybe more so, than at Karnak with giant figures and obelisks flanking the entrance. Another example of how Egyptology has amazed us as a people for generations, one of the smaller obelisks that used to sit here is now in another famous spot – the Place de la Concorde in Paris. That’s right, that impressive obelisk starring in thousands of photos in the City of Lights came from this spot, from Luxor. We arrived a little late and the sun had already started to descend below the horizon, setting the stage for a special twilight walk through this ancient temple. As is common in Egyptian design, it’s a serious of gates and courtyards, leading the visitor from one area to the next and telling a story along the way. Most amazing to me here weren’t the statues or columns, but the engravings that seemed to occupy every spare inch of stone. Telling a variety of stories all important to the temple and the daily lives of the Egyptians, it’s a special look back in time at what was important to them and how they lived their lives. A sort of engraved photo album, a rare opportunity to be transported to another place and time.

Egypt is a country of seemingly endless special moments, but for me the first ones were amongst the most important. As with any place, the more you see of something the more you take it for granted. I know that if I see one more European cathedral I may go insane. But that’s sad, that means I’ve lost some of that initial wonderment that I had to have felt at one time in my life. Throughout my time in Egypt, no matter how many temples I toured (and there are a lot) I never got tired of them. I never bored of hearing about the ancient kings and queens and the complex religious mythology that seemed to govern their every action. I felt like a kid again, cracking open the World Book Encyclopedia and gawking at images of King Tut that jumped off the page. Egypt isn’t your average travel destination and Luxor and Karnak aren’t your average sites, but instead are a part of a total experience that is more incredible than you’ll ever realize until you visit and see it all for yourself.

3 thoughts on “Love At First Sight: Exploring Karnak and Luxor in Egypt”