After any trip, one of the first things I do is to go over my notes and start editing photos. Doing both at about the same time helps me preserve important memories I might otherwise forget and to start the process of organizing my thoughts about a new destination. The initial result is a collection of favorite moments, specific points in time that weren’t just nice, but which came to define the trip for me. I had many such moments in Egypt, and as I review my notes I thought it better to start my coverage of this beautiful country with some of the more important events that shaped my adventure.

I was in Egypt with the luxury travel provider Insight Vacations who, after a hiatus, has returned to the country like so many other operators have. The decision wasn’t taken lightly and while Insight has a long history in Egypt, they of course want to also be able to provide the best experience to their guests. And they did, for me and my group at least, and I was thrilled to see a country that has come back from some fairly turbulent times and that is looking forward to once again welcoming people from around the world to gaze at its treasures, both ancient and modern.

There were many more than just seven special moments for me during the 10-day trip of course. I thought it best, however, to start with these seven, both iconic and not, that not only defined my trip but which I am sure will define most traveler’s experiences in Egypt. 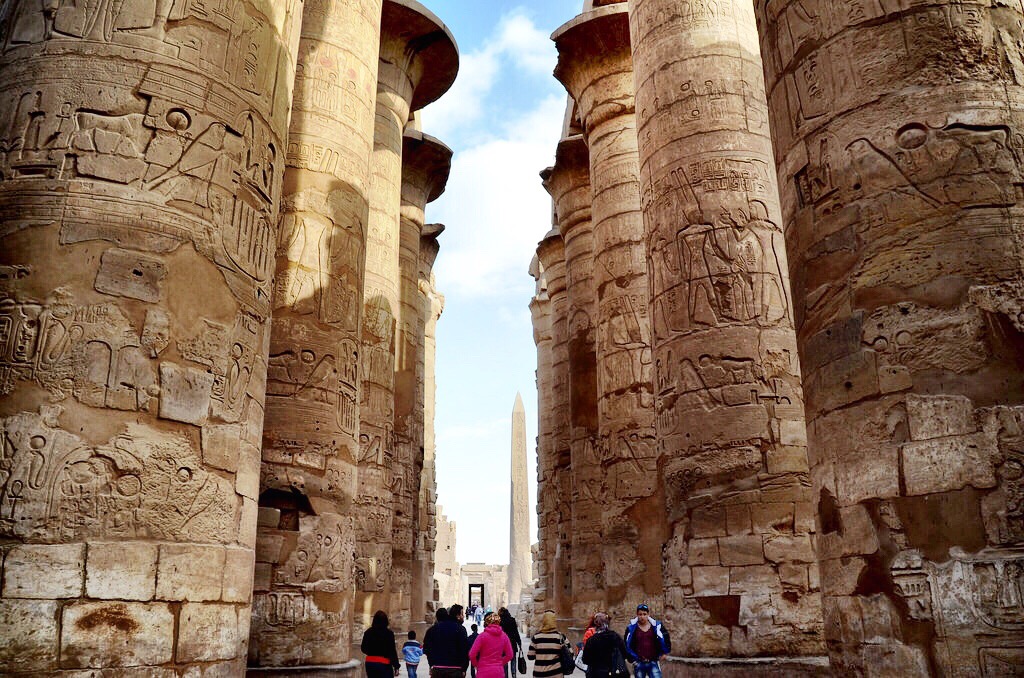 For whatever reason I am fascinated by all things ancient. If there’s a pile of ruins somewhere, I’m the first in line to see them. I’ve always been like that and even as a young child I wanted to be an archeologist, to undercover the hidden stories of cultures long since gone. For as many ancient sites I have visited though, nothing prepared me for the power of the temples in Egypt. The first one I walked through was Karnak in Luxor, a great place to start as it turned out. Walking down the avenue of the sphinxes and past two giant stone sentries, I could easily imagine what life was like here 3,000 years ago. That’s the best part of visiting these ancient places, to try to connect with a people so ancient that it boggles the mind. Yet one learns that they were just people and had the same fears and thoughts as we do today. Karnak is a beautifully well-preserved site and to learn about it and to glimpse for the first time what lay in store for me in Egypt was a highlight of my trip there. 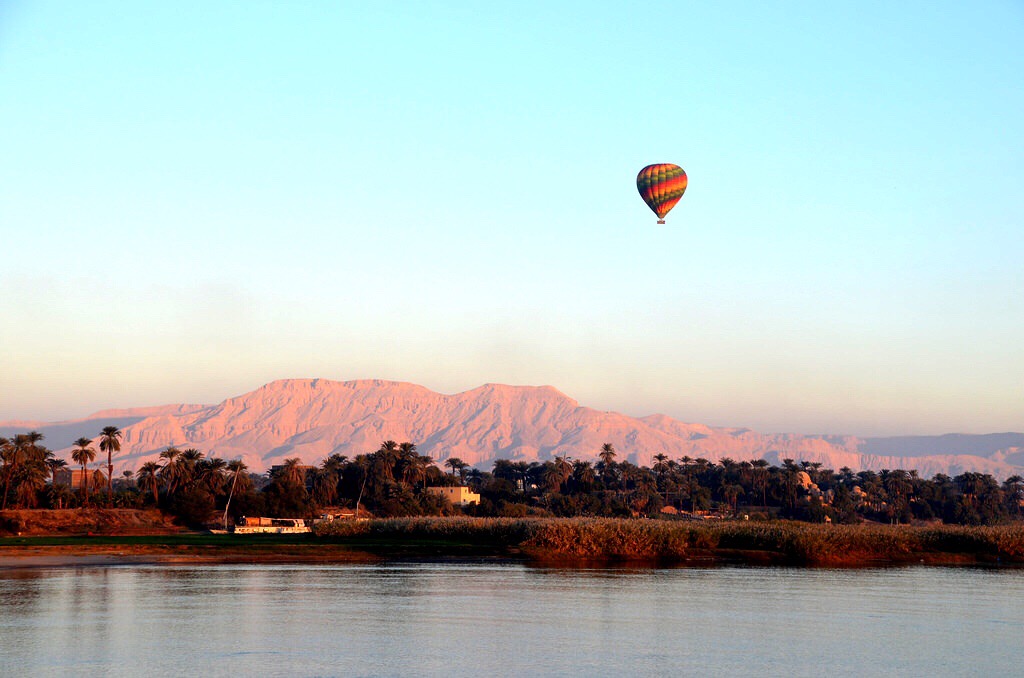 Before the trip I wouldn’t have guessed that a Nile cruise would be a highlight, but it really was the star of the trip. Visitors have been seeing Egypt from the mighty Nile for as long as there have been tourists, with Agatha Christie being one of the most famous tourists to sail the waters. But it’s not a staid experience, it’s a lively one and as I learned a lot of fun. A traditional route lasts a few days and takes passengers from Luxor to Aswan, or vice versa. There are literally hundreds of different ships on the river, but as part of the Insight Vacations tour my trip was on a luxury Uniworld Cruises ship. Sitting on the top deck, watching the sunset with kids playing along the shore and the faint sound of the call to prayer in the background – that is how I will always remember those few days. More than just a picturesque way to see Egypt, it’s a convenient one and every day I awoke to find myself in another famous spot, to once again be amazed by the ancient Egyptians. No matter how you visit Egypt, I think a Nile cruise should be on everyone’s must-do list.

Egypt isn’t all pharaohs and camels though and the country has obviously been through a lot in recent years. That’s why I was there in fact, to see for myself whether or not the country had come back and if I thought tourism was safe again. While I felt safe throughout my trip and came to the conclusion that yes, Egypt is indeed open again for business, it was nonetheless impactful to stand in front of Tahrir Square, for many of us the place that defined the 2011 revolution. The square in fact has been the focal point of political change in Egypt for decades, but 2011 was the first I’d heard of it and initially visiting made me a little anxious. Of course today it’s just a peaceful area, with the Egyptian Museum on one side, the Nile on the other and flanked by hotels and office buildings. It was one office building though that caught my eye, the burned out shell of the former National Democratic Party headquarters building. The symbol of the old corrupt system, it was set ablaze during the revolution and left partly as a reminder to both citizens and new leaders. It’s a powerful image and reminds visitors of the still turbulent process of change the country is struggling through. 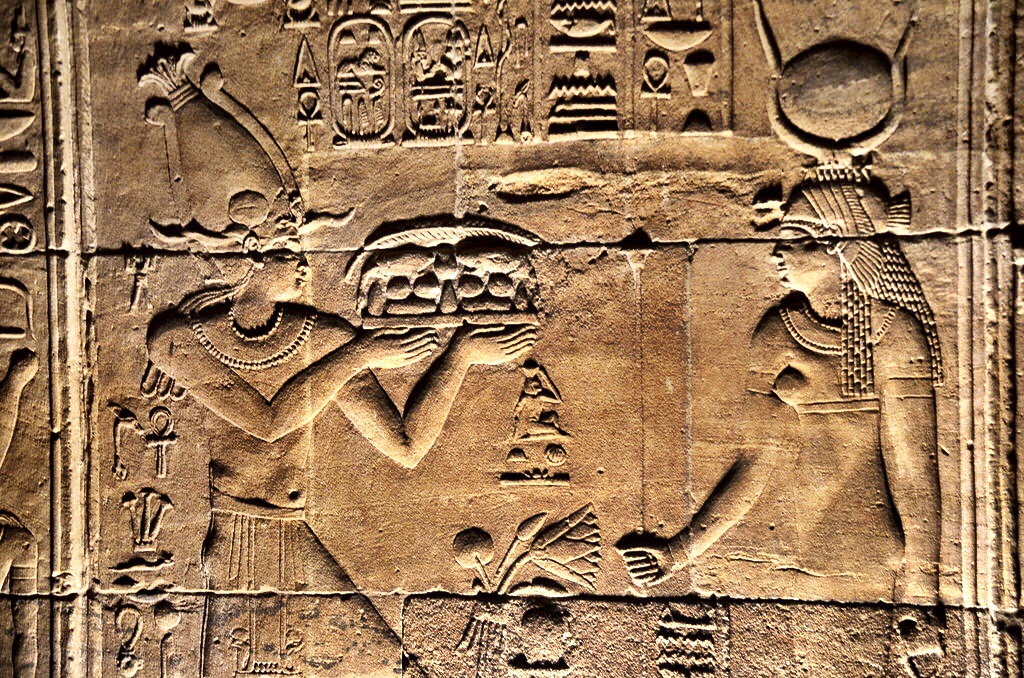 4. Valley of the Kings

Still hidden from sight today, the secluded Valley of the Kings is one of those iconic travel moments that everyone should experience at least once in their lives. Home to at least 63 tombs, with more discoveries likely, the Valley is a privileged look into the beliefs and customs of the ancient Egyptians. It’s also the best chance we have as tourists to feel like Indiana Jones, if only for a few hours. Visitors get to visit 3-4 tombs, with different ones open to the public on a rotating basis. Walking through the doorways though I could easily imagine the thrill and excitement those early archeologists felt as they first crossed the threshold. Nondescript desert mounds give way to beautifully decorated passages and chambers, the colors as bright and vibrant as they were 3,000 years ago. Think about that number for a moment, it’s an incredibly long period of time and to have these special places so very well preserved is a treat. Sadly photos aren’t allowed in the Valley, so I can’t share the dazzling murals and hieroglyphics, but I can say walking through the ancient tombs is one of those special travel moments that I will remember all of my life. 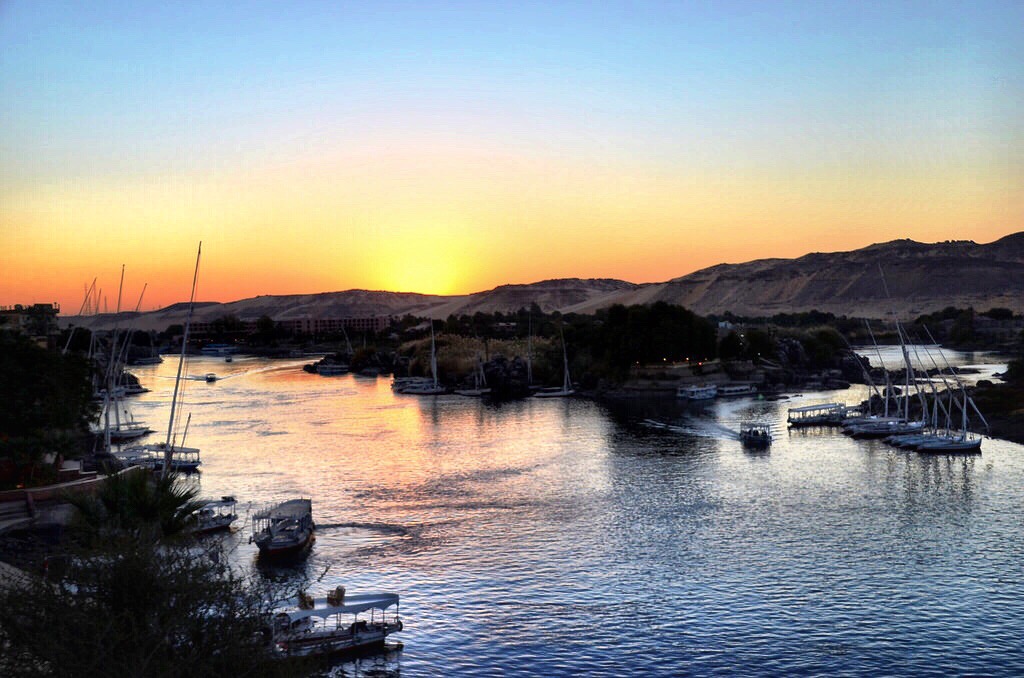 5. High Tea at the Cataract Hotel

For a luxury guy like me, one of the many highlights of my time in Aswan was visiting the classic old Cataract Hotel. A great example of British colonial style and refinement, the hotel is exactly what I love; properties where time seems to stand still and servers walk around in pith helmets. Since I was on a boat I didn’t stay as a guest, but I did join in on one of the hotel’s oldest and most well known traditions – high tea. Sitting on the veranda, surrounded by trays and trays of sweet and savory snacks, watching as the sun quickly dipped below the Nile was not only a beautiful experience, but also a fun one. It’s a featured experience on the Insight Vacations tour and I would never have guessed beforehand how much I would end up enjoying it. Agatha Christie once stayed at the Cataract, and it was from that same veranda that she first started formulating the story line for one of her most famous books, “Death on the Nile.” It’s a great experience and a different way to relax after a long day of traipsing through dusty ruins. 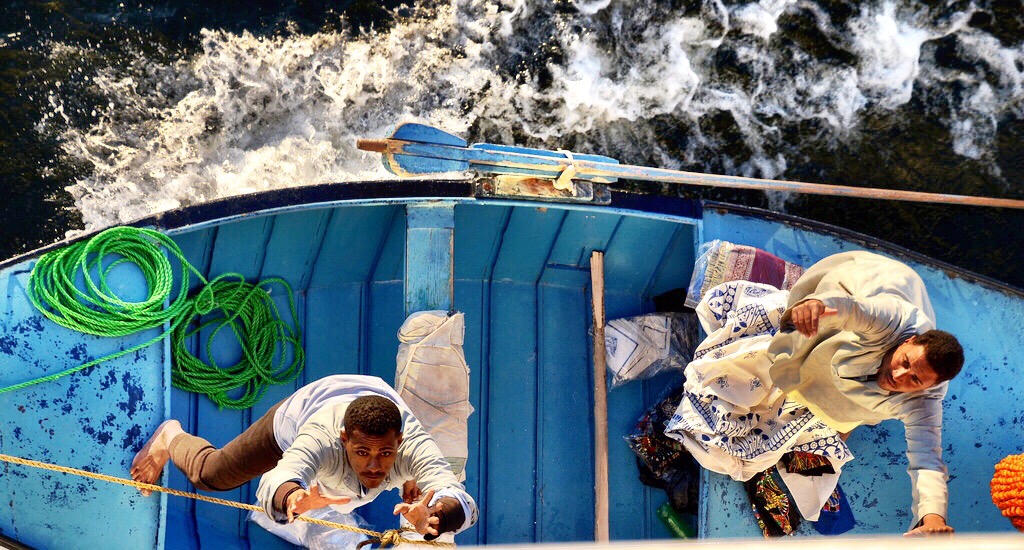 Hawkers are a common, if not slightly annoying, sight in Egypt. Especially now since there are so few tourists, these purveyors of cheap trinkets seem to be everywhere. Part of me feels bad for them; their livelihood has been decimated since the loss of tourist dollars into the country. But they can also be a bit much, refusing to take no for an answer. That’s why I loved the approach these two guys took as the Uniworld ship I was on cruised down the Nile. Pulling up alongside the ship, they tied themselves to a rail and started yelling to get our attention. They were selling all kinds of things, mostly towels and galibayas – traditional Egyptian clothes. The process was a simple one; they showed their goods from the boat, if you liked something they threw it up in a plastic bag. If, after further inspection you liked it, you haggled down to the water, hopefully finally agreeing on a price. Another bag was thrown up into which you put the money and the transaction was completed. It was fun, entertaining and everyone went away satisfied. A much better way of doing business than hassling, at least in my opinion. 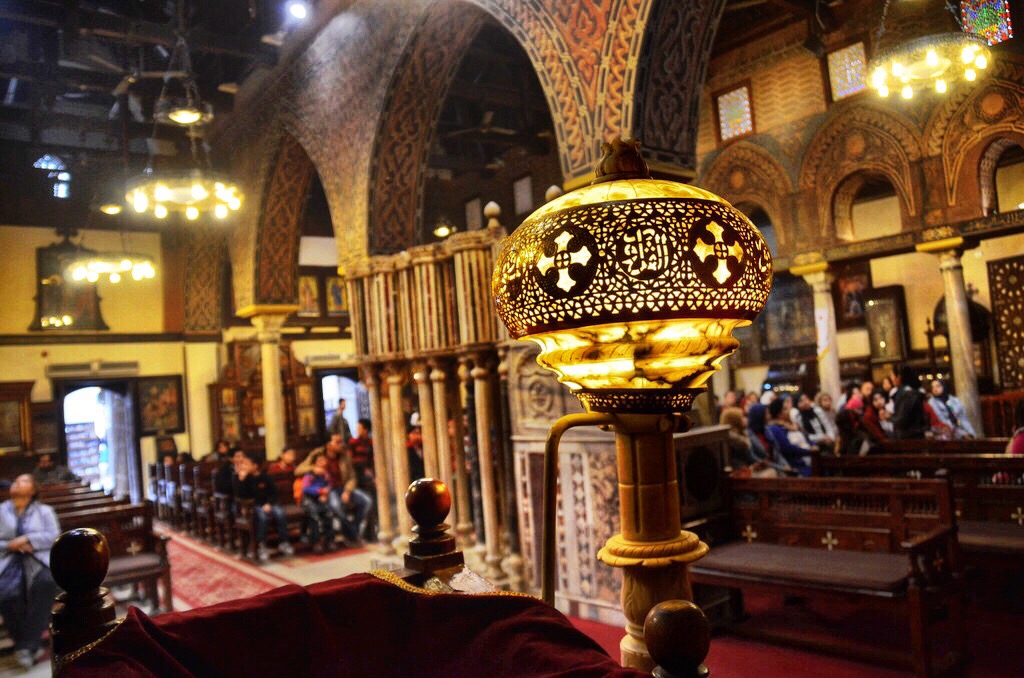 Cairo is an ancient city, and in its Old City you can see evidence of past centuries around every corner. In one section sits some of the oldest mosques, synagogues and Christian churches on the African continent, a marvelous reminder that at one time it different faiths coexisted somewhat peacefully. It was the church that caught my attention though, the ancient Saint Virgin Mary’s Coptic Orthodox Church also known as the Hanging Church. It’s called that because it sits above a Roman fortress and literally hangs over a passageway. Probably dating back to the 3rd century, the church is a glimpse into early Christian life that is hard to find anywhere in the world today. I arrived right after Mass, and the fragrant smell of incense still filled the air in a thick haze. I’ve been to a lot of churches, but seeing parishioners in them is particularly special, to see the church operate in the way in which it was intended. While the church is beautiful, it’s the nearby underground passages that are the real thrill. An ancient area where Coptic Christians have lived for centuries and where once the Holy Family hid from Romans, it’s a beautiful labyrinth of corridors and alleyways, a small city set apart from the normally chaotic streets of Cairo.

These are just a few of the many special moments I enjoyed in Egypt while traveling with Insight Vacations. But more than anything, as a group they form to perfectly encapsulate my personal journey through this special country, a place I didn’t think I would end up loving as much as I did.

Have you been to Egypt? What were some of your own special moments?

11 thoughts on “My 7 Favorite Moments in Egypt”