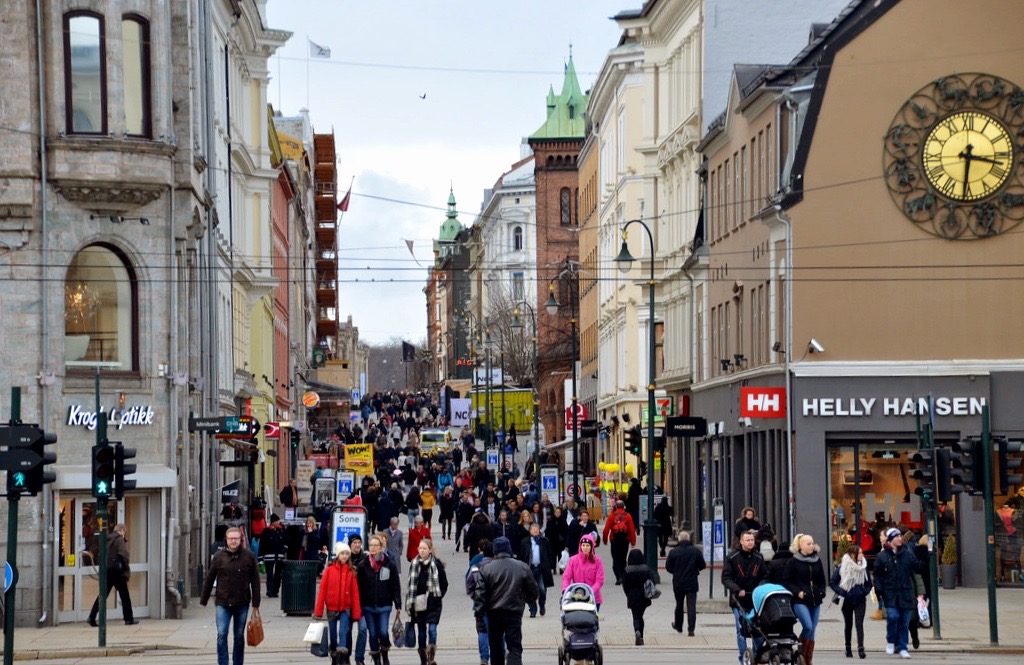 I was excited to visit Oslo for the first time. From previous travel experience, I knew I would probably like it just as I have enjoyed visiting other areas of Scandinavia. There’s just something about these countries, their cultures that appeals to me, whether it’s the great eye for design or their unique approach to life, I always feel comfortable traveling around Northern Europe. Oslo proved me right in how I felt while there, but I was surprised by some of the sights and experiences I enjoyed there. I didn’t expect them, and I mean that in the most positive way possible, and of everything I saw and did, these are some of my favorites.

1. Kindness – Ok, my Norwegian friends should not take this the wrong way, but their global reputation isn’t exactly a warm and fuzzy one. Maybe it’s their Viking ancestors, but in comparison to Swedes or even Danes, my previous experience with Norwegians has been general civility, but nothing even close to warmth or unanticipated kindness. That changed in the capital city though, as I walked around town I was met with kind smiles and offers of help whenever I needed them. Instead of keeping to themselves, people welcomed me into their lives, sharing nuggets of cultural information that was priceless in my indoctrination into all things Norwegian. I obviously grossly mischaracterized them before my trip, allowing a few gruff personalities color my image of an entire populace. It was another great lesson on how important is it NOT to prejudge an entire nation and to always keep an open mind. Lesson learned and duly noted; sorry about that Norway.

2. Fun museums – Most world capitals have great museums, or at least a few they like to show off. Glancing at the list in Oslo I wasn’t overly enthusiastic, but decided to give them a chance. I’m glad I did. I have a penchant towards slightly offbeat museums, so I skipped the normal art and history destinations and instead visited four that also tell the story of Norway, but in a slightly different way. The Kon-Tiki Museum is devoted to the life of that very unusual Norwegian, Thor Heyerdahl who decided to try to prove his theory that Polynesians came from South America and managed to cross the Pacific in a hand-made timber raft. Next to the Kon-Tiki is another maritime tribute, the Fram Musuem that tells another seafaring tale, but this one a bit colder. The Fram was a revolutionary vessel used by Norwegian explorers in their treks around both the Arctic and Antarctica. It’s a story of pure exploration and I loved every minute of my own explorations around this small but well-done museum. Sea life has always been important in Norwegian culture, and yet another maritime museum is just a short walk away, the Viking Ship Museum. Inside are a series of fully intact Viking ships, once used for burial rites they are in amazing condition, allowing a sneak peek to a culture that can be enigmatic at times. Finally, and I’ll devote a lot more to these museums in future posts, is the Norwegian Museum of Cultural History. This massive, outdoors establishment has brought together a variety of authentic buildings from different time periods and various parts of the country to show the folk and cultural history of the country. It’s amazing really, from 1950s apartments to an old stave church, it’s all there and makes for a great afternoon of exploration in the (hopefully) nice weather.

3. The food – Once again I run the risk of insulting entire nations, but in general I haven’t always been impressed with Scandinavian food in the past. Don’t get me wrong; I’ve had plenty of fine meals, but nothing extraordinary or particularly exceptional. Italy has its pastas, France loves a nice pastry and even Spain can amaze with a variety of regional delicacies, but in Scandinavia I’ve been hard-pressed to find anything comparable. And I didn’t necessarily find that from the food in Norway, but I enjoyed my culinary experiences a lot more. First, I was able to nicely interrogate my tour guide, who led me around town one afternoon, about what she considers to be Norwegian food. Not unlike the UK where curry wins the day, she said that ethnic and international cuisine also reigns supreme in Oslo. But, she quickly added a corollary that traditional food is far from dead in Oslo, no matter how cosmopolitan they are. Especially on special occasions and weekends, classic dishes like grandma used to make resurface, and a lot of modern restaurants also draw from these same rural traditions. I experienced this first hand when I ate at the decidedly modern, but also delicious Grilleriet restaurant. Drawing upon Oslo’s love affair with summer BBQs, grilling is the underlying theme, but executed with precision and with a nod towards more traditional food values. Homemade cured meats, venison and a variety of purees, confits and jams were all undeniably Norwegian, but also with a lot of global influence thrown in. It was amazing, and showed me more than anything else how the city is trying to look to the future but with a foot firmly planted in more traditional values. 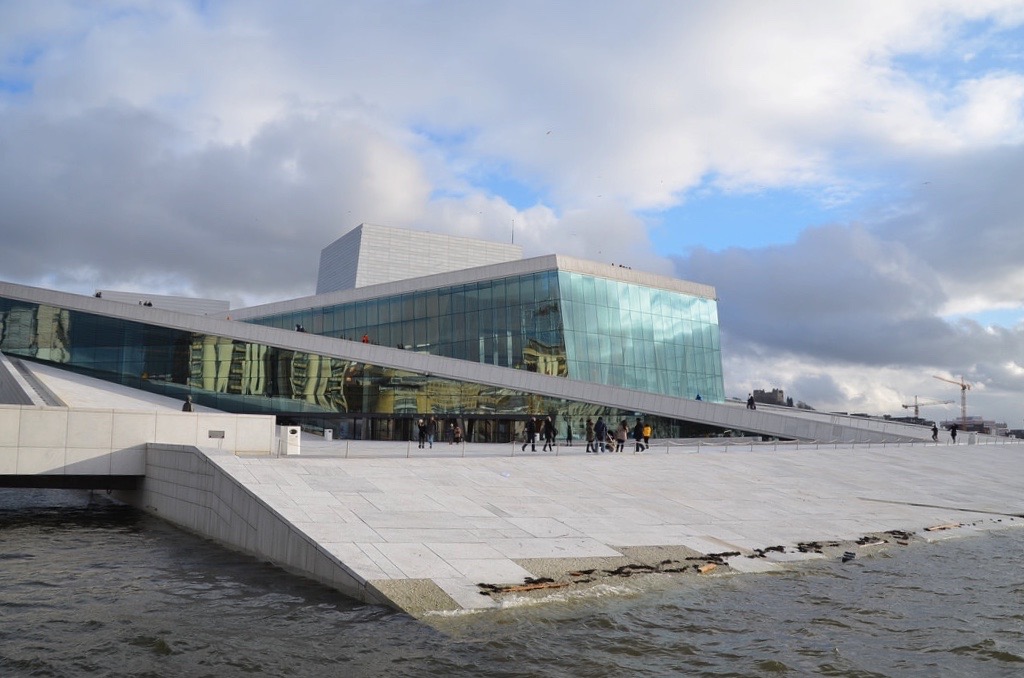 4. The architecture – It’s hard for me to visit any city in Scandinavia and not be wowed by the architecture, and the same definitely holds true for Oslo. My hotel was located downtown, near the parliament building and all around me I saw the results of the building booms of the 19th and 20th centuries. Gorgeous Belle Époque and Art Deco embellishments, a precision in building design that just doesn’t happen any more. I’m always so impressed by these grandiose structures of better times, the details weren’t necessary but added because they looked right. I prefer that so much more to utilitarianism and it adds to a tourist’s enjoyment of these historical buildings. But Oslo is also experiencing another building boom, especially along its waterfront areas. Led by the massive and instantly famous opera house, buildings with unique and unusual designs are sprouting up all the time and when the building boom is complete, a new reimagined part of town will have been created. There may be a lot of construction cranes dotting the skyline at the moment, but the end result will be one for the architectural digests of the world, of that I have no doubt. 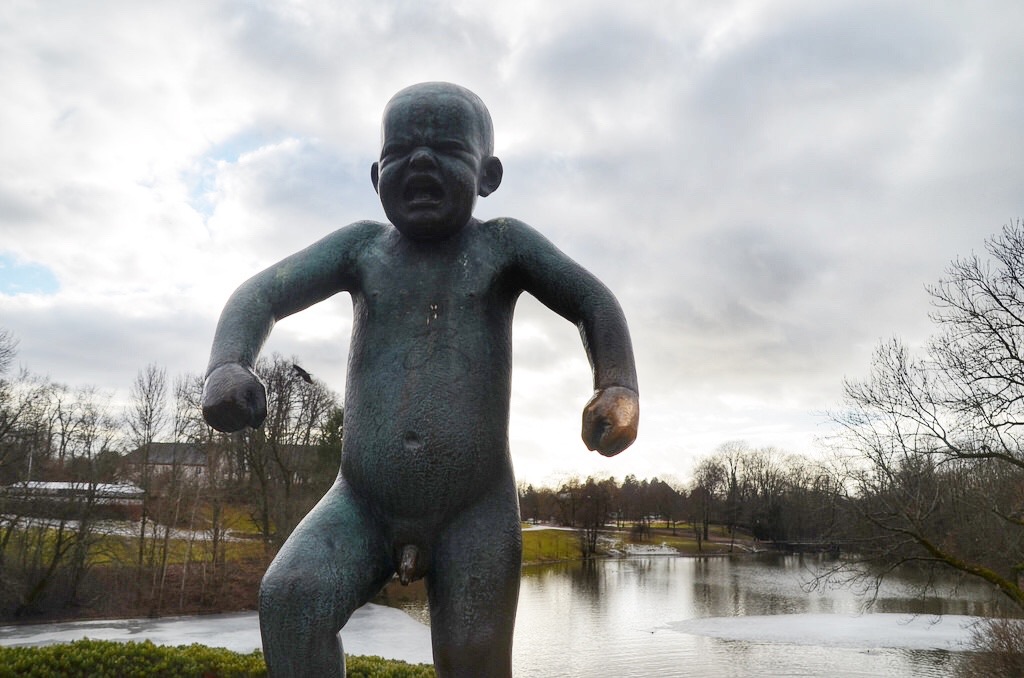 5. Beautiful outdoor spaces – One of the hallmarks of any great city, at least in my opinion, is how it balances modernism with quality of life. A great city needs to offer its citizens plenty of green space, areas around town where people can relax, have a picnic and enjoy NOT being surrounded by steel and concrete. Not every city does this well sadly, but Oslo has one of the best balances in terms of quality of life I’ve ever seen. As a water-lover, I particularly enjoyed the fact that the waterfront was close and easily accessible. There’s nothing like standing on a promenade or even dock, watching boats in the distance and the sun set over the water. More than the ocean though, the Akerselva River around which Oslo was originally built flows through the city still, creating quiet and unexpected moments of pastoral peacefulness. The star of the greenery show in Oslo though is unquestionably Frogner Park. The park is the largest in the city, and in the summer months thousands crowd its lawns with barbeques and picnic baskets, but it’s the unique art installation that makes this a truly special place. In the center of the park is the world famous Vigeland installation, a series of 212 sculptures made from bronze and granite, spread over an 850-meter area making it the world’s largest sculpture park. All designed by the slightly unusual artist Gustav Vigeland, the works of art may be different, but are packed with beauty and significance, making this an important spot to see with a trained tour guide.

Oslo has a lot to offer, and I found myself surprised time and time again by its urban elements, both large and small. While these memories and moments are the ones that were most important to me on my trip, there are still many others I’m sure I will discover on future trips to this truly great world capital.

Have you been to Oslo? What did you think?

5 thoughts on “Five Things I Love About Oslo”