I knew I’d like Budapest, even before I visited it just felt “right” to me. It has all the elements of a great European city that I love: culture, great food, beautiful architecture and plenty of personality. All of this I somehow divined from research and nice photos, and so when I finally first set foot in the Hungarian capital, I was ready to be awed and luckily for me, I was.

My partner and I arrived in Budapest a day before our Viking River Cruise was scheduled to depart on a Christmas market trip along the Danube. An extra day in Budapest was key not just to acclimate to the new time zone, but to see more of the city itself. Time was limited though, and so we decided to hire a tour guide for the day using the Tours By Locals web site. I’m a big proponent of using a professional tour guide for a few hours or even an entire day on a trip. They help me understand the city faster than I would on my own, provide some fantastic cultural insights and when I’m short on time, they’re key in making sure I see everything I want to.

Budapest is a big city though, with the two sides of the city – Buda and Pest – separated by the powerful Danube River. A few hours just aren’t enough to see everything, so I decided to stick to the Pest side in order to get a more in depth look at the part of town that is home to most of the sights that have made Budapest so well-known around the world. I loved everything about my time in Budapest, but I wanted to share a few highlights that I particularly enjoyed, places I think every first time visitor should see and even a few things I wish I had done differently.

My Favorite Experiences In Budapest

Granted, this is obviously seasonal and was a major reason why we visited, but if you have the chance to be in Budapest around the Christmas holiday, take it. There’s nothing quite like Christmas in Europe and it’s an experience I know I’ll never get tired of. As soon as we landed, we wandered off in search of the markets and found the largest one, full of Christmas shoppers, stalls selling crafts and gifts and of course plenty of food. The food, in my opinion, is what defines any good Christmas market and it amazes me how much they vary not only country to country, but city to city. In Budapest we found loads of traditional favorites like stews and soups, including goulash, roasted meats and the seasonal dessert chimney cake. Made from sweet yeast dough, the cake starts off as a strip that is spun and then wrapped around a cone–shaped baking spit and rolled in granulated sugar. It is baked on a charcoal grill while doused with melted butter, until its surface becomes golden-brown. During the baking process the sugar caramelizes and forms a shiny, crispy crust on the cake. Made to order, the cakes are served up hot and the steam rising up looks just like a chimney, hence the name. They’re also delicious and I wasn’t the only one who thought so, the cake stands always had the longest lines.

Just about every tourist to Budapest will at some point find themselves in the City Park, a massive space that was transformed in the 19th century for the millennium celebrations. Museums, monuments and a pond that turns into an open-air ice rink in the winter, this greenspace is the pastoral heart and soul of the city. A highlight for me was that ice-rink, which on a chilly December morning looked more like a Currier and Ives print than real life. The weather didn’t keep us down though as we walked through the park, marveling at the massive Vajdahunyad Castle in the distance. The castle was also built for the 19th century Exhibition to feature copies of several landmark buildings from different parts the Kingdom of Hungary. Originally made just from cardboard and wood, it became so popular that it was rebuilt from stone and brick.

Many people may not know that Budapest is home to many thermal spas and pools, creating a culture of soaking and relaxing in these natural wonders. The granddaddy of the spa complexes though is the Széchenyi facility, adjacent to the city park. Forget the medicinal benefits, I was immediately captivated by the architecture and design of this beautiful early-20th century complex. Still in use today, thousands of locals and tourists alike descend on the spa every year to relax and to feel better, all thanks to the natural healing waters. Even if you don’t have time for a quick soak, it’s worth it to walk around both inside and out to see the beautiful design of the spa itself. 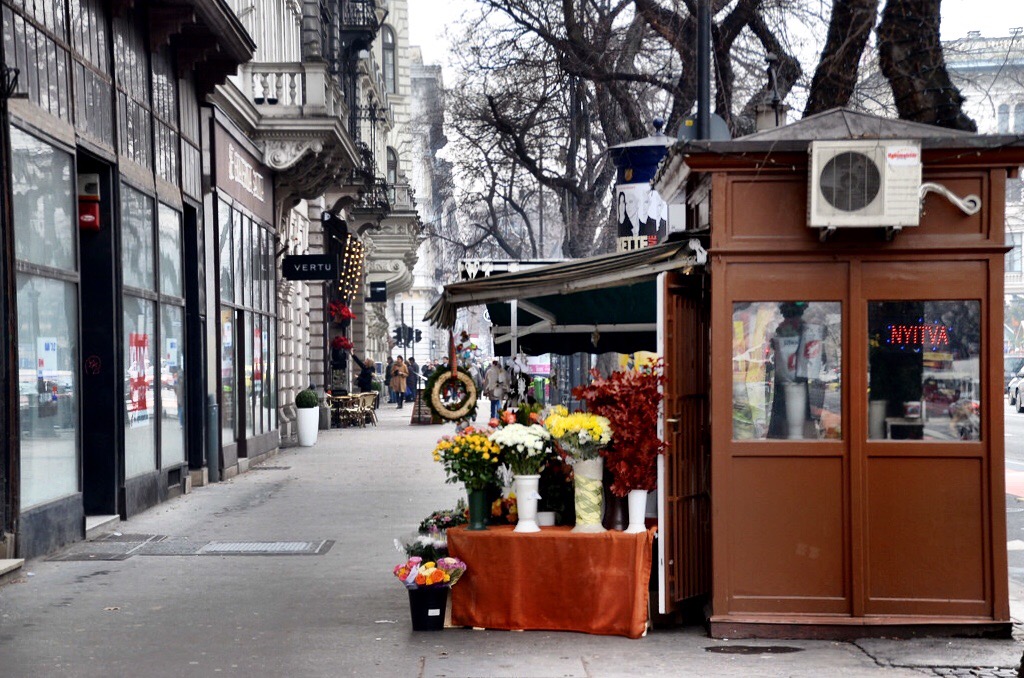 Paris has the Champs-Élysées and Budapest has Andrássy Avenue. Built and designed in the grand urban planning traditions of the late 19th century, the avenue is long, wide and impressive. Reminding me more of a street in Paris, Andrássy is still lined today with distinguished townhouses, shops and restaurants. Just as it was when it was built, the avenue today is still the city’s major thoroughfare and is easy to reach by public transportation. In fact, that’s one of the best ways to see it, just take the tram down the length of the building and marvel at the buildings that line it on either side. Also be sure to stop off at one of the many traditional coffee houses along Andrássy, an important tradition in Budapest.

I’ve visited a lot of churches during my travels, so I thought I knew what to expect at the beautiful St. Stephen’s Basilica in Budapest. And I was right, to a degree, inside it is indeed a beautiful church and we were lucky enough to visit during services, making an ordinarily cold stone church come to life with music, incense and faith. But, the real highlight of the visit had nothing to do with the church itself, instead it was going to the top of it for some of the best views in town. For a few dollars, visitors can take an elevator to the top for a stunning 360-degree view of Budapest. From the top you can see everything and finally get a sense of the city’s design and layout. You can even see over to the Buda side, just as long as it’s not too hazy outside.

These have become really popular in recent years and not just amongst the backpacker set, but just about every visitor to the city. Ruin bars are bars and cafes that started when people wanted cheap places to drink. Taking over decrepit buildings that had fallen into disuse, entrepreneurs set up shop creating eclectic spaces where nothing matches and everything is unplanned. They’re fun places to meet friends, hang out, relax, drink, get a bite and just enjoy the evening. Of course they have now been taken over by hipsters and tourists, but that doesn’t mean they’re not still fun, they are, and if you really explore them you’ll see old apartments and stores from the Communist era that offer a surprising glimpse into the city’s darker past.

Without a doubt, the stunning views of the Hungarian Parliament Building are the most recognizable in Budapest and amongst the most famous in all of Europe. And yes, it is indeed that beautiful in person as well. Visitors can walk around the perimeter and get some close up shots of the government building immediately in front by strolling along the promenade lining the Danube. I’m a political geek though, so I also bought tickets for the daily tour of the interior of the Parliament Building itself. Not a long tour, it was a thorough one and the guides take guests through the formal chambers of the massive building as well as into the more humdrum government chambers themselves. A highlight is a look at the Holy Crown of Hungary, the 12th century symbol of the nation itself and which is still guarded by two soldiers at all times.

What I Would Do Differently

To be honest, we just didn’t have the time to properly enjoy the Széchenyi Medicinal Baths and I really wish we had. Sure, touring the massive complex was nice but I was dying to jump in and soak in those warm waters for a while. Next time this will be my first order of business, not just for the inherent benefits of the thermal spa, but for the cultural ones as well. There are many baths around Budapest and it’s a social activity to visit them, talk to people and just enjoy the day. So if you’re planning a trip to Budapest, be sure to add in a few hours to detox at any of the spas around town. 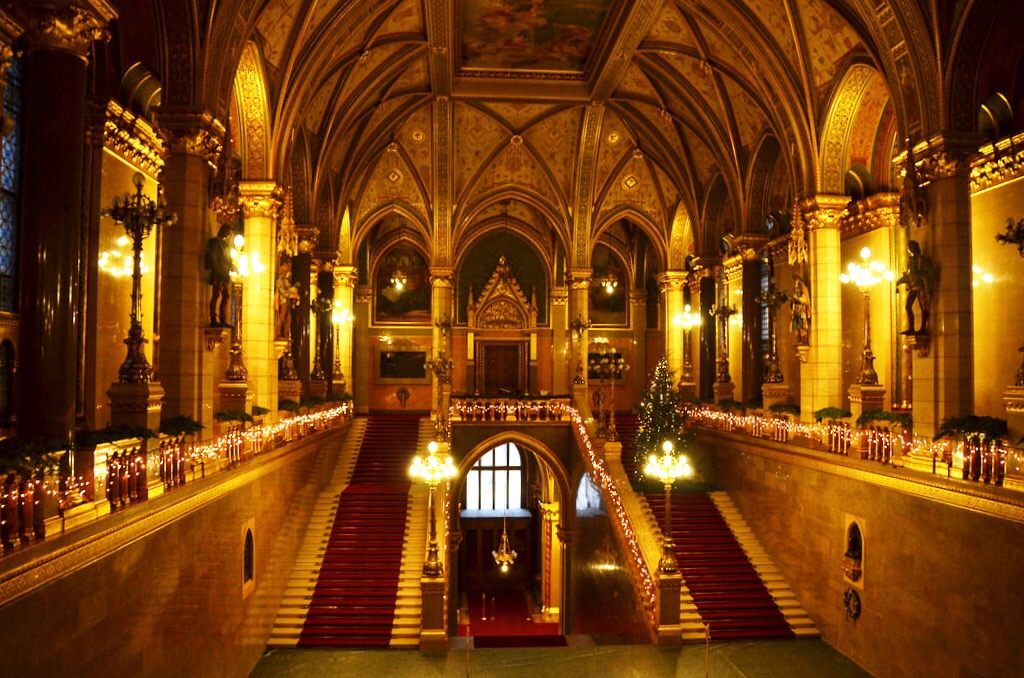 While I’m glad I took the guided tour inside the Parliament Building, I’m not sure it was completely necessary. Sure, the rooms inside were nice and if that’s something you’re interested in, then be sure to include it. But it consumed about an hour and a half of our day, precious time that could have perhaps been better used. Instead, for me it was enough to appreciate and marvel at the architectural wonder from the outside.

So there you have it, my thoughts about visiting Budapest for the first time, what I did and what I’d do differently. It was a brief visit, admittedly, but that just whetted my appetite for a return when I can spend some more time in this beautiful city and learn even more about it.

Have you been to Budapest? What was your favorite thing to do or see?

6 thoughts on “My First Time In Budapest: Seeing the Best of Pest”