I had never been in a country during their national holiday celebrations before. Most countries have something, whether it’s Independence Day or other national holiday that rallies everyone together. Living in Washington, DC, July 4th is naturally a big deal for me and in general we Americans I think care more about our Independence Day celebrations than any other country in the world. Then I visited Australia. Finding myself in downtown Perth on the night of the big fireworks show was an unexpected delight; one of those happy travel accidents that just aren’t lucky, but tend to transform a trip.

Australia Day, celebrated annually on January 26th, isn’t an independence day as we Americans know it. No, it’s instead the anniversary of the 1788 arrival of the First Fleet of British ships to the continent and the raising of the flag of Great Britain. A little awkward for a national holiday, but based on my experience Australians have absolutely adopted it as an important day.

I think that Americans and Australians have such an affinity for each other because our collective personalities are so very similar. Wait, hear me out. I think we tend to see the world in similar ways and we each tend to grab onto life instead of just letting it pass us by. We’re also both very patriotic, at least in my experience and I saw the full power of that patriotism while walking down to the Swan River in Perth last year. 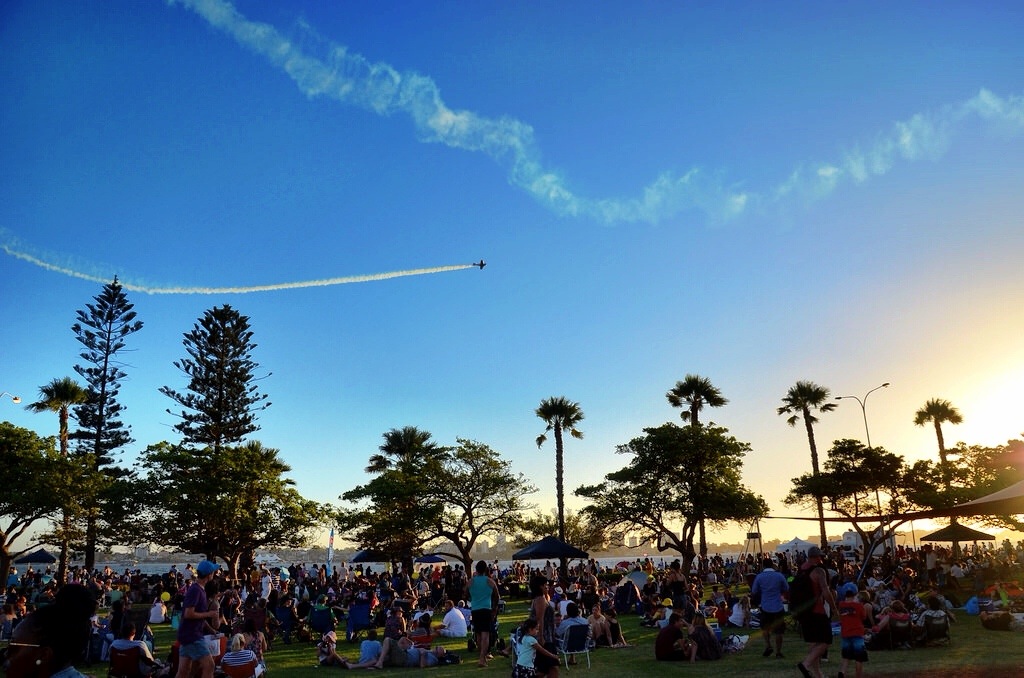 My Australian friends told me that the size of Australia Day celebrations varies around the country, as it does here in the U.S., with certain states and cities being more enthusiastic than others. Perth has earned the reputation over the years of being one of the most enthusiastic about Australia’s national holiday, and based on what I saw I believe it. My hotel was just a couple of blocks from the river that flows through town and the large park alongside it. During the day joggers run past and folks walk their dogs, but it was transformed by the time I arrived in early evening. I’ve been to a lot of fireworks shows and the one thing I hate is waiting, so I tried to wait until the last minute before joining the rest of the city. I wish I hadn’t though, because in Perth the event is about much more than just some bright lights.

Not unlike here in Washington, friends and families camped out all day along the river, securing the perfect spot not just to see the fireworks but also to enjoy the day. It’s summer of course in Australia so the weather is beautiful and it’s an ideal place for barbecues, games and just enjoying each other’s company. Dozens of vendors set up in the wide-open space, selling everything from snacks and meals to offering games for the kids to play. It was an exciting, festive atmosphere and a lot of fun to join in even as an outsider.

And as an outsider, I did feel like an intruder of sorts. This wasn’t for me, this wasn’t for tourists, Australia Day is for Australians and I felt like I was getting a look behind the cultural curtain as I found my own perfect space to see the show. I looked out across the river and saw even more people assembled on the other bank; Perth makes full use of the open spaces abutting the river and it seemed like the entire city had gathered for this one event. It was nice to see and after having been to so many countries that don’t have such a strong national pride, where people really don’t identify with their own home country, it was heartwarming to be in a place where people reveled in it. Australian flags flew all around me and on the loudspeaker I heard Men at Work’s famous song “Down Under.” I loved that, I love that Australians have such a great sense of humor and almost never take themselves too seriously. I think that’s one of the many reasons I love visiting Down Under so very much.

Finally the moment came, the light show started and a combination of massive fireworks, lasers and even water jets created an evening that amazed the children and put smiles on even the most hardened adult. It was fun; good clean fun of a sort that is increasingly hard to find. For me, it was a personal treat to be admitted into the club – if only for a day – to pretend for a few moments that I too was Australian and to feel the pride that comes along with it. I decided then and there that seeing other national celebrations around the world is a must and while I’ve only ever been to one other in Malta, it’s something I hope to do more of.

If you’re planning a trip to Australia, try to plan it around Australia Day to see for yourself what Australians think about their own country and to feel the infectious spirit that radiates from a great Australia Day celebration, like the one in Perth.

Have you been to another country’s national holiday celebrations? What did you think?