Hamburg is one of Europe’s great cities that for some reason still stays off the radar of many tourists, and I’m not sure why. It’s easy to reach, it’s fun to explore and is completely unlike most other cities in Germany. I recently returned from my third visit to the city and each time I’ve learned to appreciate it even more. To help guide your own visit to Hamburg, today I want to share some of my personal favorite experiences in the city, from the conventional to the slightly unusual.

One of the aspects I love most about revisiting cities is the opportunity to try more offbeat experiences and to get to know different areas of the city. That was my goal on what was my third trip to Hamburg and at the top of my to-do list was to take the world famous Beatles Tour. The brainchild of musician turned guide Stephanie Hemple, this top rated tour is a unique look at the formative years of the Beatles when they learned how to be a band in Hamburg. When the Beatles arrived into the city they were still kids and had no experience performing as a band. The years spent on the stages in Hamburg taught them how to perform and, ultimately, is what created one of the best bands in history. Stephanie takes guests through this history by visiting the clubs they played, meandering around the still quirky St. Pauli neighborhood. Since Stephanie is also a musician, the tour is accentuated with the strum of a ukulele and her melodious voice, bringing to life the early years of the Beatles. The tour is fun and informative and a great experience for just about any type of traveler. 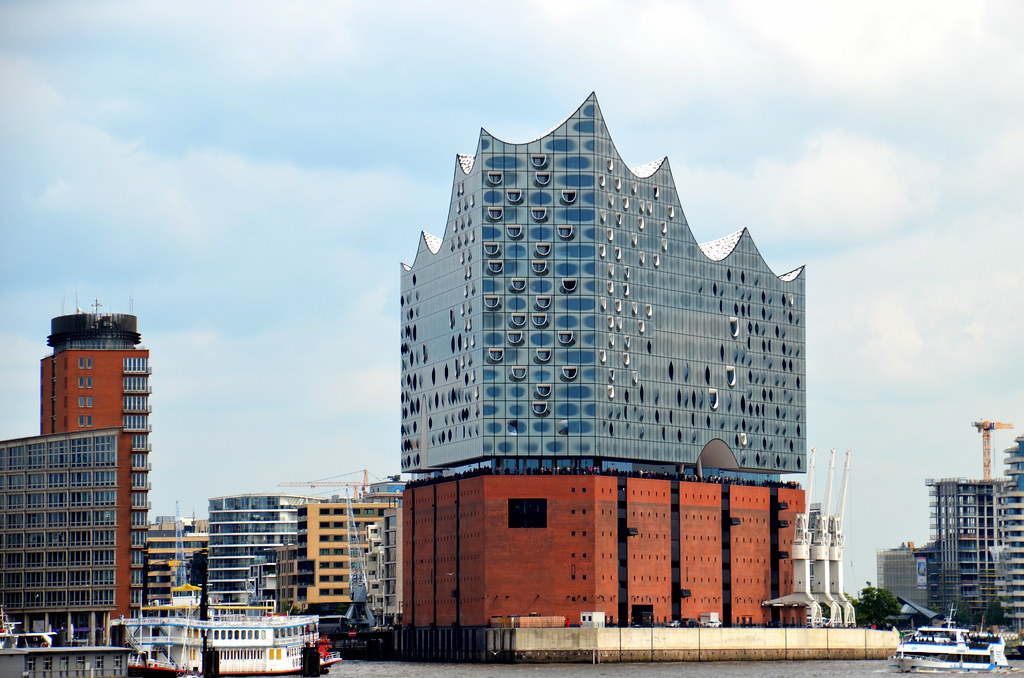 Hamburg’s newest landmark is one I’ve wanted to visit for a while, always unable to because it wasn’t quite finished. Celebrating its grand opening earlier this year though, the Elbphilharmonie isn’t just the city’s latest architectural achievement, but one of the most remarkable in Europe. From afar it’s hard not to be impressed with this massive glassy building, meant to resemble either a hoisted sail or a wave, depending on your point of view. Located in the newly interesting warehouse district, the Elbphilharmonie is meant to be at the center of life in the HafenCity neighborhood of Hamburg. First impressions are everything, and I find it impossible for anyone not to be impressed by the long escalator ride up into the heart of the building itself. Looking around at my fellow visitors, everyone had their phones out, snapping as many photos as they could undoubtedly for their own Instagram galleries. And there’s plenty to admire from a design perspective both inside and out. The lines and angles of the interior are beautiful in their own way, from the stairways to the concert hall itself. A terrace allows visitors to enjoy amazing views of the city, showing that this architectural achievement really was built with the user in mind. The Elbphilharmonie is fun to visit just as a voyeur, but also be sure to enjoy a performance in what is one of the largest and most acoustically advanced concert halls in the world.

Hamburg is still celebrating the addition of its first UNESCO sites, areas of town I visited before their inclusion on this important list. I wanted to see them again though and as I thought, the buildings were just as amazing a second time. Listed as one entry, the Speicherstadt and the adjacent Kontorhaus district show off the architectural prowess of Hamburg in both the 19th and early 20th centuries. I particularly love the Speicherstadt, which seems plucked out of someone’s steampunk fantasies. Hamburg has long been an important port city, fueling the imperial ambitions of many a leader. At the heart of this commercial success was the turn of the century Warehouse District, nearly a mile long it’s the largest timber-pile founded warehouse district in the world. More than just a utilitarian storage area, the district was constructed with design and grace in mind. Small little alcoves and ornamentation can be found everywhere, an Easter egg hunt for the curious. The nearby buildings of the Kontorhaus district also reward the curious. Exemplifying the best of Art Deco design, these office buildings were created between the 1920s-40s and not only show off the beautiful design of the era, but also speak to the rapid growth of the city’s commercial side during the time period. When put together, wandering around both neighborhoods is a fun way to spend some time in Hamburg.

In 2000, twin brothers Gerrit and Frederik Braun made the improbable decision to build the world’s largest model railway. No one believed them, no one wanted to finance it and no one thought visitors would ever come. Seventeen years later and more than 10 MILLION guests later, the brothers have definitely had the last laugh. I’ve been to a lot of transportation museums, but nothing quite prepared me for the Miniatur Wunderland experience. The name suits it well because it truly is a miniature world, built across multiple floors are dozens of recreated cities and countries; everything from Las Vegas to all of Switzerland and even a functioning airport that is deceptively fascinating. I hate to use a tired cliché, but from my brief time there it became obvious to me that the Wunderland really is one of those activities that everyone, young to old can enjoy. I’ve never been a big fan of model railways in particular, but even I couldn’t help but be drawn into the imaginary worlds created by the brothers Braun. Thousands of miniature people living an automated life, where night turns into day and back again during the course of your visit. It’s strange and incredibly odd, but fascinating in its own fun way. 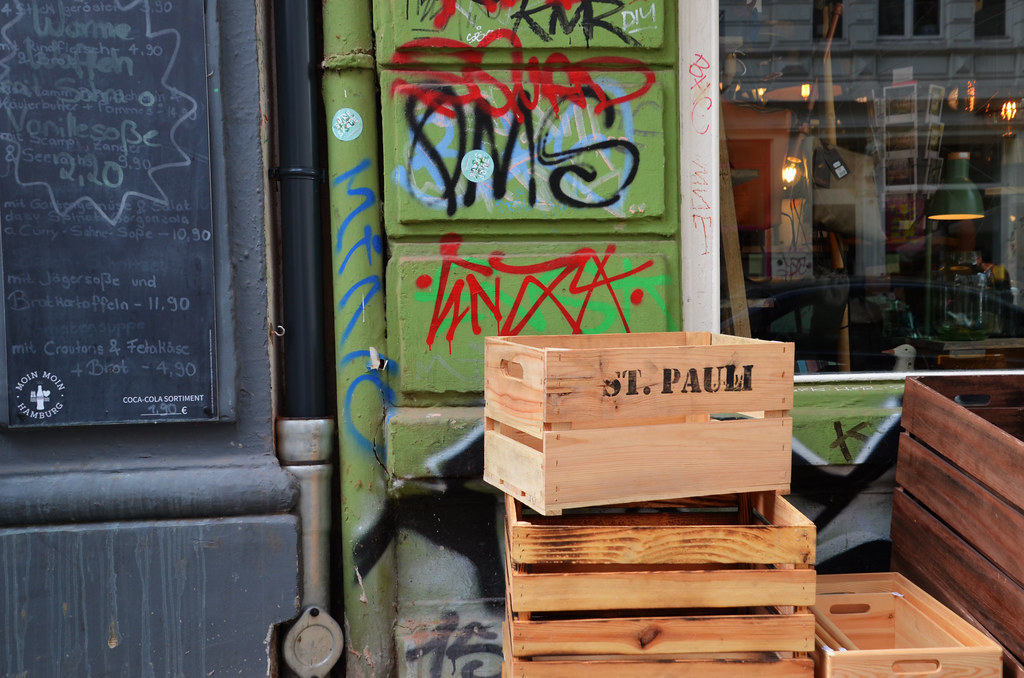 I don’t think I’m speaking out of turn when I say that Hamburg is a little weird, but in the very best possible sense of the word. Famously liberal, forward thinking and just downright odd at times, Hamburg has long attracted like-minded individuals, creating a city that is original and innovative in almost every possible way. While a more ethereal concept, a good way to start to understand this unique spirit is to tour some of its neighborhoods including the famous St. Pauli neighborhood but also more residential areas like the Schanzen- and Karolinen districts. Both neighborhoods are famous for being alternative, hip and undeniably cool and residents are a curious mix of pram-pushing young couples to anarchists ready to join the next protest. Cool shops line the streets and it’s a place where you can get everything from an expertly crafted cappuccino to that 1970s LP you never knew you needed. A fun stop though for me was at the neighborhood favorite, Ratsherrn Brewery. Once a famous name in the region, new owners are now creating small batch beers that reflect the creativity of the neighborhood. With both a restaurant and biergarten though, it’s also just a really nice place to relax with friends, especially on a warm summer’s evening.

I had some extra time on my last trip, so I decided to do something a little different – walk under the River Elbe. Built in 1911, the Old Elbe Tunnel was an engineering wonder and helped the city manage its massive commercial growth. Today it’s more often used by curious tourists, who can walk from one bank to the other, rewarded by amazing city views on the other side. Entrance is free and some cars and bikes still use the tunnel, so be sure to use the sidewalks inside. This was a personal highlight on my last visit not only because it’s a little quirky, but it was a fun way to see even more of the city.

Elegance at the Hotel Reichshof

I’ve visited Hamburg three times and on each visit I tried a new hotel, but on my last stay in the city I found my new go-to favorite, the historic Hotel Reichshof. First opening its doors in 1910, this newly refurbished hotel now exudes the charm and romance of an era long since past. The original columns and archways great all newcomers and the service is as good as I’ve experienced. Add in amazing food and the perfect location near the main train station, and it’s hard not to immediately fall in love with this luxury hotel.

Hamburg has a lot to offer all visitors, but from my time spent in the city these experiences I think go a long way to show the best that the city has to offer.

1 thought on “My Favorite Not To Miss Experiences in Hamburg, Germany”