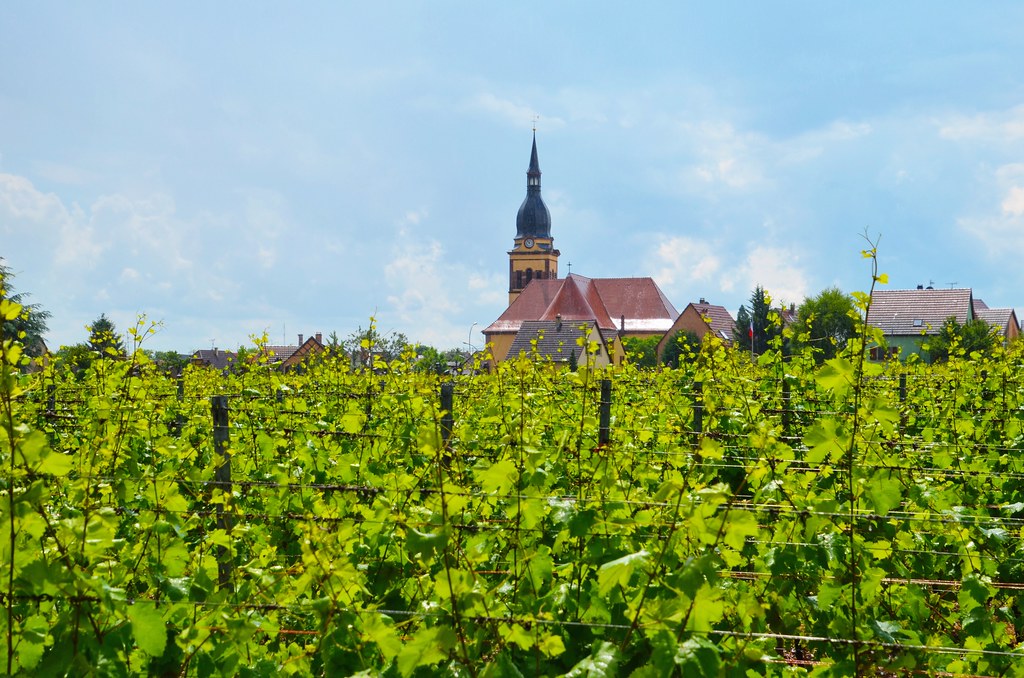 Exploring the Upper Rhine Valley region included a wide array of different experiences, from the streets of Basel to the sunny squares of Freiburg in Germany, but one of the many highlights was the day I spent in the rolling vineyards of France tackling the great Alsatian Wine Route. More than about the wine, this classic European driving route includes small villages, great outdoor adventures and cultural experiences you won’t find anywhere else in the region. While my time driving the route was brief, I thought I’d share some highlights and why I think this is a drive everyone should add to their bucket lists.

From Marlenheim to Thann, this 100-mile route winds its way though some of the most astounding countryside you’ll ever see. Vineyards that seem to extend forever, sloping valleys along the foothills of the Vosges mountains and more than 1,000 wine producers are all key aspects of the Alsatian Wine Route. If you love wine, this is the trip you need to take but even if you don’t, it’s a fun drive for many other reasons as I quickly learned. For me, the highlight of experiencing this region of France was visiting all of the small towns and villages that line the roadways, centuries old and all possessing a unique and vaunted history.

It would take weeks to properly visit and explore all of the many towns and villages lining the Alsatian Wine Route, time I sadly didn’t have. Instead I decided to make the most out of just one day on the trail, visiting a few villages I thought would be most interesting. While they may share some common attributes in terms of architecture and design, I quickly learned that even these three towns located not too far from each other couldn’t have been more different. 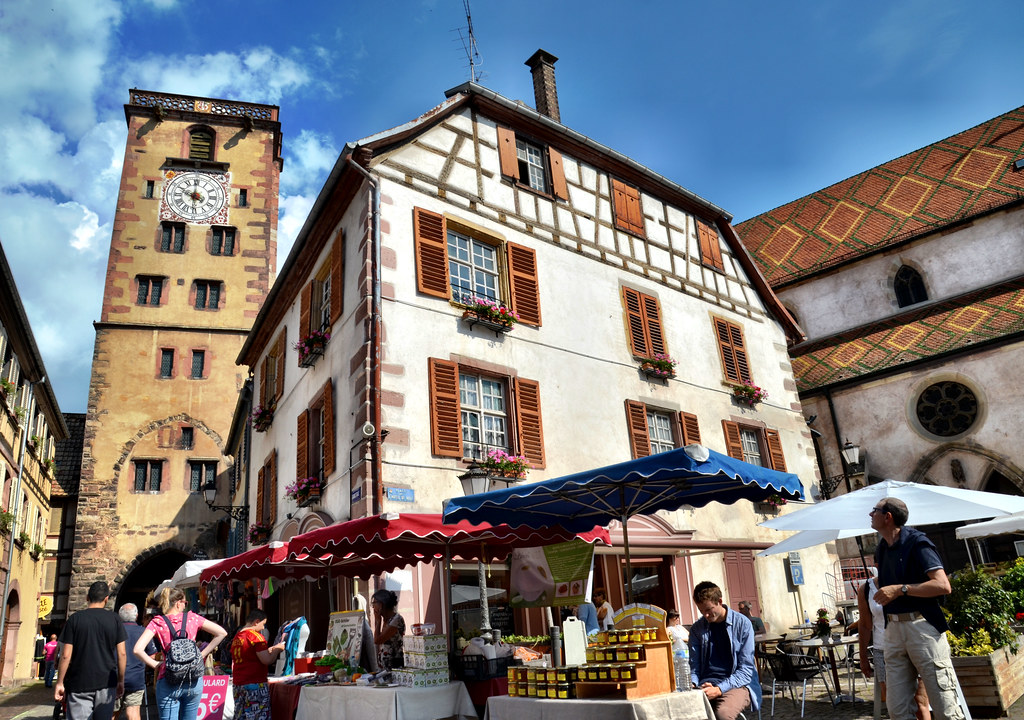 Although the weather was picture-perfect as I drove into Ribeauvillé, the weatherman had already let me know storms weren’t far away. I was in a race against those dark skies as I tried to see and do as much as I could, while paying attention to the time. But if any village deserves some time, it’s this one. One of the oldest towns in Alsace, its wine history goes back centuries and clues to its importance can be found everywhere, but especially from the incredible ruins of the Three Castles that still overlook the village today. The great thing about visiting the various settlements along the route is their size. They aren’t big and most have a similar layout, with one main street running through them. That’s the path I took through Ribeauvillé as I gawked at the ancient buildings; not for the first time overwhelmed by the vibrant colors surrounding me. It was a beautiful Saturday morning and the town was packed with locals and visitors alike, everyone stopping by the morning market to see what was available and pausing to enjoy coffee at the corner cafe. It was my first real introduction to the driving route and set the perfect stage for a day of exploration.

Officially one of the Most Beautiful Villages in France, this small town is just a couple of miles from Ribeauvillé. That’s actually an important aspect of the drive that caught me by surprise. The distances between villages were not dramatic, just a few miles in most cases, which translated to a day of hopping from one place to the next. It’s also what makes the Alsatian Wine Route such a popular spot for cyclists and even trekkers. Today, Riquewihr looks much as it did in the 16th century, a perfect little town frozen in time. Colorful half-timbered houses tell the story of German influence in the area and of course, the wine is free flowing. Known primarily for the dry Riesling produced in Alsace, the village has been selling its wines for as long as there’s been a village. Walking along the main street I quickly understood why everyone told me that this was a stop I couldn’t miss and it came to define my time along the Alsatian Wine Route. I had never heard of Riquewihr before first researching the Upper Rhine Valley but now I know it’s a place I’ll never forget. It’s funny how that happens and just shows how important the travel experience is, to help us grow, learn and ultimately become better people in the process. 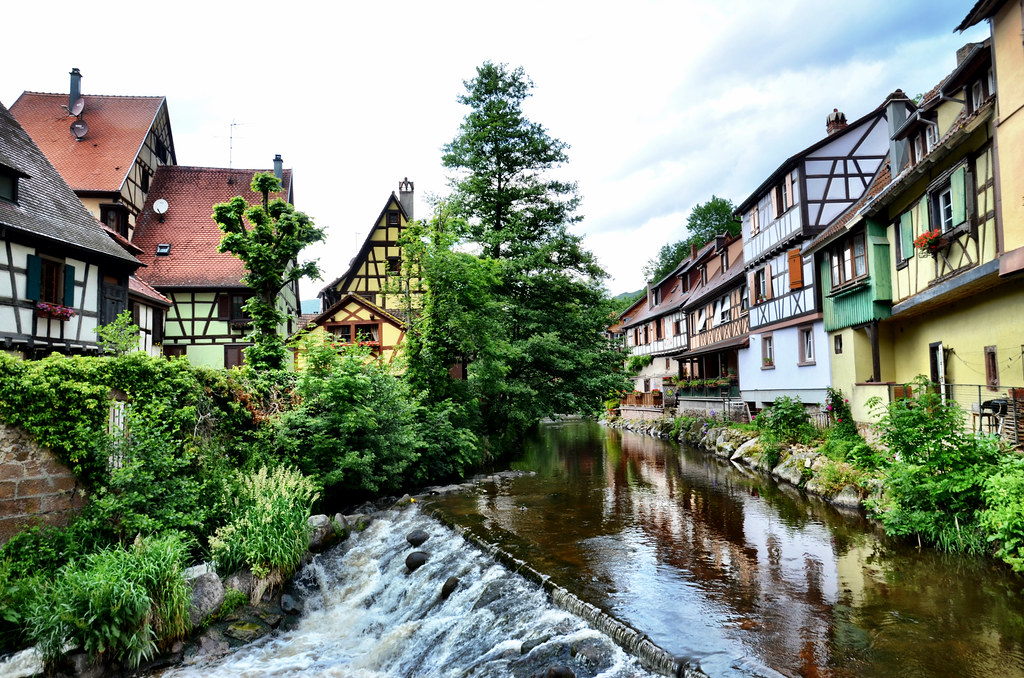 Conveniently located in-between Riquewihr and Colmar, Kaysersberg is another town characterized by an ancient castle, as well as the vines surrounding it. Kaysersberg surprised me more than any other village I visited, mostly because it rewarded aimless wandering more so than the others. The colors of the main street couldn’t be muted even by a ferocious thunderstorm that passed through, a short but intense few moments. Just when I thought the main street had come to an end, it doglegged and I was met by a beautiful river scene, complete with German-style half-timbered houses lining it. Since the storm was still threatening, I was just one of a few folks out on the streets exploring and enjoying this gorgeous village. A rare experience to be alone with my thoughts in one of the region’s most beautiful spots.

While there is no wrong way to experience the Alsatian Wine Route, I personally think it makes the most sense to start in Alsace’s largest city, Strasbourg. One aspect I loved of exploring the Upper Rhine Valley region is how easy it is to go from one country to another, including the final country on my trip – France. I’d been to Strasbourg before but it was wintertime and the weather wasn’t all that great. That’s why I was so excited to see this beautiful city in the bright sunshine. Since I had visited a couple of years ago, I decided to do a food tour all about Alsatian cuisine; a fun way to better understand the city and entire region really. Along the way I also enjoyed the many sights of the city, including beautiful river views. What many people might not expect to see in Strasbourg are the gorgeous waterways, especially the incredibly important River Ill. For centuries this was the city’s conduit to the rest of the world, a river that also brought it incredible wealth. That’s why today we can enjoy the massive cathedral, the old half-timbered homes and all of the other architectural marvels found around town. It also makes for a nice place to relax on what was a perfect summer’s afternoon.

An easy drive from Kaysersburg, Colmar is the highlight for many people exploring not only the Alsatian Wine Route, but the entire region. To be fair, Colmar is fairly well known for scenes like this one, an extremely well preserved old town that clearly reflects its ties to nearby Germany. Colorful half-timbered houses, canals where you least expect them and a history that goes back for centuries – these are all reasons enough to enjoy spending time in this remarkable city. The last time I was there was in the middle of winter and to see the colors come alive in the bright summer’s sun immediately seemed like to best way to experience Colmar. Parking my car, I spent hours visiting museums, enjoying the views and taking my time to get a better sense of the town. As usual though, my favorite moment was a simple one. Stopping at an outdoor cafe for a Nutella crepe and coffee, sitting there along the canal and watching everyone walk by to me seemed like the best way to understand Colmar. Regardless of what you do there though, if you’re in the region this is another one of those must-stop highlights in a part of Europe full of them.

One of Europe’s great drives, the Alsatian Wine Route is an experience anyone who loves Europe should plan to tackle sooner rather than later. Rewarding slow and thoughtful travel, it’s a drive not to be rushed, but to be savored. Not unlike the amazing wines you’ll find along the way.

3 thoughts on “Driving the Incredible Alsatian Wine Route in France”