Ireland is one of those travel hotspots that is popular for a reason – it lives up to the promise. We all have certain preconceptions of what Ireland is really like to visit and, for the most part, those expectations are met and then exceeded. I recently returned from another jaunt around the country, this time exploring the history and cultural traditions that are at the base of modern Ireland. From ancient castles and churches to the food and hospitality, I had an amazing time exploring this remarkable part of the country so today I thought I’d share some of my Instagram photo highlights. Note: I was invited to Ireland by Tourism Ireland and am working with them to share what makes Ireland’s Ancient East so much fun to visit.

Newgrange
I started the trip off with a site I’ve long wanted to visit, Newgrange. More than 5,000 years old this neolithic passage tomb is older than the pyramids, Stonehenge and almost every other manmade wonder in the world. Hidden beneath a pasture for millennia, it is remarkably intact and is an amazing connection to our ancient ancestors. Walking into the tomb itself, I couldn’t help but be amazed as I scanned the ornate circular design work carved into the rock, still there after all of these years. Newgrange, along with others nearby, are the best known tombs of this kind in Europe and to stand there in that spot was honestly humbling for me.

Trim Castle
This 12th century fortress is also Ireland’s largest standing castle and while it has an impressive history, the castle is perhaps best known for a starring role it played in a movie. Many scenes from the movie “Braveheart” were shot in Ireland including here at Trim Castle. Even without its movie star past, it’s a beautiful place to visit and the views from the top of the Keep are well worth the trip alone.

Loughcrew
Many people have asked me what it’s like to drive in Ireland so I thought I’d share this photo to show some of the amazing views I enjoyed along the way. One reason why I think Ireland is such a popular place to visit is that it lives up to and then exceeds our expectations. We all have certain images in mind of what we think Ireland should look like and for the most part, it does. Rolling green hills dotted with sheep, kind and warm hearted people and surprises around every corner – that really is Ireland. Practically speaking driving on the other side of the road has never been a problem for me, although a few traffic cones I’m sure would disagree. But I couldn’t imagine exploring the verdant green Emerald Isle in any other way. If any country begs for personal exploration and wandering, it’s Ireland. 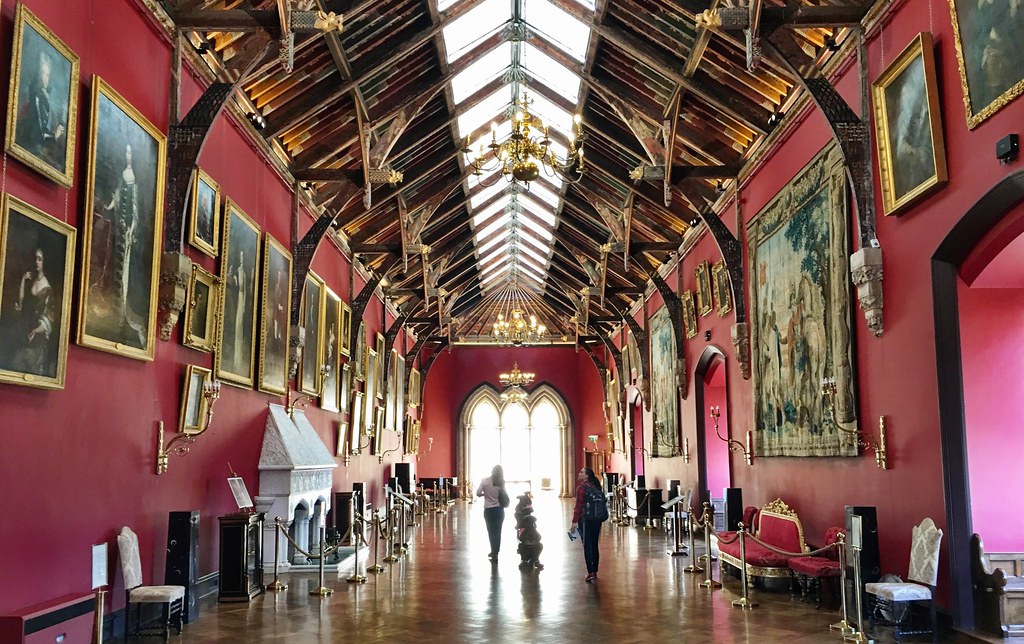 Kilkenny Castle
If Kilkenny isn’t on your Irish travel to-do list, add it now. I spent a day exploring this colorful medieval city and quickly fell head over heels for it. Part of the reason for that is how much there is to do, but at the center of the visitor experience is the ancient and massive Kilkenny Castle. I’ve visited scores of castles throughout my travels, but rarely are they as impressive inside as they are outside. Kilkenny is one of those rare exceptions though where I was just as impressed by what I found within the old stone walls. Ancestral home to Butler family for 600 years, one of the focal points of the property is this, the Picture Gallery Wing. Built in the 19th century to showcase the family’s massive art collection, today I think the room itself is the most interesting aspect of the wing. I’ve been re-watching “Downton Abbey” lately and I couldn’t help but think of the formal occasions enjoyed here, with the aristocratic who’s who of the day passing through and enjoying some time in the Irish countryside. There’s a lot more to Kilkenny of course and I had a blast enjoying as much as I could, but if you visit I strongly recommend spending a few days and just enjoy your time in the city.

Glendalough
No this isn’t the Western US or Canada, this is Glendalough in Ireland, a mystical place not only thanks to its ancient history, but for views like this one. Nature played a major role in my trip to Ireland, so I’d be remiss if I didn’t share just some of the amazing scenes I’ve been privileged enough to visit. Meaning the “Valley of the two lakes” in Irish, Glendalough is a popular getaway for a few reasons, namely a certain St. Kevin (real name). A 6th century hermit who actually lived in the caves above the Upper Lake pictured here, a large pilgrimage site popped up nearby in his name a couple of hundred years after his death. Today the chapels and towers are largely in ruin, but make for a fantastic visit. Glendalough also lies within the massive Wicklow Mountains National Park and there are bunches of walking and hiking paths for all levels, even if you just have an hour to spend meandering along the green paths. Spending a couple of hours exploring, this lake was one of the highlights of the walk – I think I was just so surprised to see it that I immediately loved it. But the entire site, from the monastic ruins to the hikes are worth a visit to see and experience a more natural side to Ireland’s Ancient East.

Barberstown Castle
An important aspect of my time exploring Ireland’s Ancient East is where I spent the night, and every evening I found myself in very different styles of accommodation. Hotels, grand manors, country retreats and even this, a castle, Barberstown Castle near Straffan. A castle of some sort has stood on this site since the 13th century, changing hands over the centuries mirroring the wars and conflicts which so often impacted Ireland.While Barberstown does have the beautiful outward appearance of an old castle, the attached buildings are also modern hotel facilities, making it a comfortable as well as unforgettable stay. Ireland’s Ancient East isn’t a single defined trail, instead it’s a region that includes important historic sites as well as cultural – ancient abbeys and burial mounds to restaurants and even hotels. What they all have in common is their link to Irish history, the counties and regions which they call home and their commitment to preserving everything that makes the country so great.