Just saying the phrase “The South of France,” conjures up images of Jackie O on a yacht, million dollar cars speeding along the coastal roads and the fashionistas of the world descending on this idyllic retreat for some leisurely time in the sun. It seems fantastical and opulent and yet that’s exactly where I found myself mid-way through my cruise around the Mediterranean with boutique cruise line Azamara Club Cruises. While I honestly enjoyed all of the ports of call, I was perhaps looking most forward to our anchorage in Monte Carlo. It wasn’t only my first time in the Principality of Monaco, but also the south of France and I couldn’t wait to explore both on a daylong excursion offered by Azamara. I’m working with Azamara to share key features of their cruise experience and as such have been compensated for my time but, as always, all thoughts and opinions are entirely my own.

I really wanted to see and do as much as possible during my day in the region, which is why I joined the Azamara-offered excursion around nearby France and Monaco. It included everything I wanted to see and do and ultimately was the best use of my time, a fact that was proven true almost immediately with a stop in the tiny village of Èze in France. We all have certain preconceptions when we visit southern France and Èze manages to live up to every one of them. An ancient village, it has been a stronghold for thousands of years thanks to its position high up on a mountain with tiny streets and alleyways that would make any attack impossible. It’s a village trapped in time, with homes and business occupying the same spots for centuries. Walking through the streets where no car could ever hope to pass, I was instantly reminded of San Marino, the microstate in Italy. Èze has the same feeling of being not only an impossible old place, but a beautiful one as well, a sort of natural splendor that radiates from every pore. 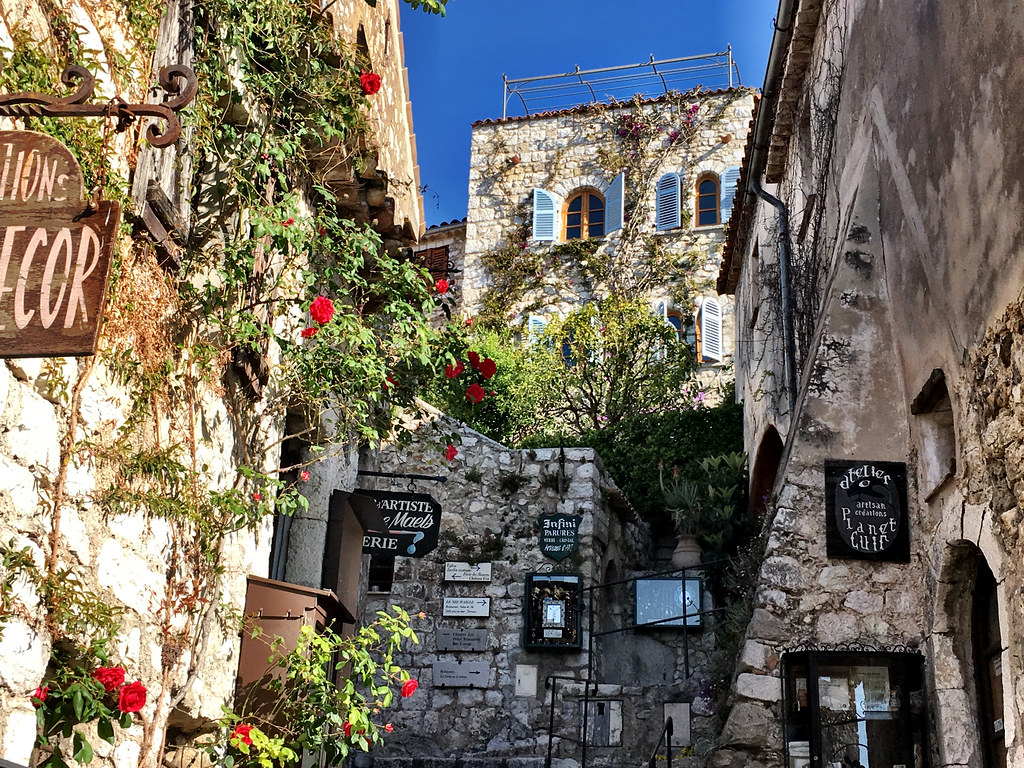 Today of course it’s an incredibly popular tourist stop, thanks to how close it is to both Nice and Monaco. But it’s so much more than that, more than just a place to stretch your legs for an hour and to buy some trinkets. Looking out across the French Riviera with its impossibly azure waters, I couldn’t help but feel thankful. Few places exceed what we hope for them, but the south of France does in every way and Èze is one of the best places to experience that special kind of travel magic.

Nice Is Nice (I’ve always wanted to write that)

I’m not sure how I missed visiting Nice for all these years, but the fact remains that I had never been. I know that to really experience it would take a lot longer than the few hours I had with Azamara, but I at least wanted a first look, a first introduction to see what I thought. I was a little cautious about it though; a similar visit to Marseilles several years ago had not gone well and I left not liking the city. I didn’t want that to happen in Nice, I really wanted to like it and depended on the excursion tour guide to show me the best that the city has to offer. And, for the most part, she did. Located on the coast, Nice is as perfect a beach town as you could hope for. It’s also been an incredibly important regional power for centuries, evidence of which can be found throughout the city. Walking around with the guide, learning about Nice’s history, its food and its culture was a fantastic introduction, but the real fun came when I explored the city on my own during the generous free time offered to tour participants.

It was Saturday, the sun was bright, it was warm and the weekly market was packed with people out and about, enjoying the day. I love it when I can be caught up in these special moments, forgetting just for a little while that I’m a camera toting tourist (which I am) and instead losing myself in the experience. I browsed the stalls at the market, enjoyed a popular local snack for lunch – Socca – walked along the beach and wished I’d brought my trunks, finishing out the afternoon with a chocolate gelato. It wasn’t fancy, it wasn’t even all that complicated but it was a perfect way for me to learn more about Nice. Spending a relaxing afternoon just enjoying the city for what it is isn’t just a great way to learn more about a place, it’s an immersive experience that can’t be otherwise replicated. That’s the theme really on all Azamara excursions and why I loved joining them and getting to know the destinations in a much more personal way.

The Spectacle That Is Monaco

My only real impression of Monaco before visiting was what I’d seen in movies and read in books. So, essentially, it was a James Bond image with everyone in white tuxes and betting millions of dollars at the casino. And you know what, I wasn’t too far off. Monaco is simultaneously one of the most fascinating and most frenetic places I’ve ever been, but part of that may have been due to the weekend I was there. The city was already setting up for its famous Grand Prix and a massive auto show had taken up residence in the heart of Monte Carlo. That meant thousands of people were there to see the fancy and impossibly expensive cars as they drove along the city’s famous driving circuit. It was both the perfect weekend to visit, while also a little intimidating at first. Walking up to the casino, the impressive landmark building established back in the 19th century, I ambled along next to the famous hairpin turn in front of the Fairmont Hotel and stood there with hundreds of other people watching the cars race past. It was the ideal immersion into Monte Carlo, to see what it does best – put on a spectacle you’ll never forget. Of course the city and Principality are about much more than just cars, and strolling along the colorful streets near the Prince’s Palace I couldn’t help but be impressed with the opulence on display. This is not a city for beggars, this is the playground of the rich and famous and it feels like it. As someone who is neither rich nor famous though, it was fun to feel that way if only for a few hours. To feel as if James Bond or Grace Kelley would round the corner, that paparazzi would soon emerge with bulbs flashing. I’ve never experienced anything like it before and I know it’s a sensation I won’t soon forget.

A single day is in no way enough time to experience the best that both Monaco and the south of France have to offer and no one would dispute that. But one reason why I love experiencing new destinations on a cruise is that I get an impression of what these places are like and whether or not I want to return on my own. I’ve learned many valuable travel lessons over the years using this approach, being surprised by the realities of certain cities and countries. No, the day with Azamara in this remarkable part of the world wasn’t meant to be my only experiences there, instead it was an introductory primer. A way for me to better understand the region to help me plan future trips in the years to come. Plus, it was just a lot of fun and ultimately that’s a major reason why most of us travel in the first place.