One of the aspects of visiting Colombia that excited me the most was experiencing its famous food culture. It’s hard to go wrong with the food scene in any South American country, but for some reason Colombia has long been on my radar due entirely to its culinary prowess. That’s why I organized several food experiences before leaving home, including a Bogota food tour. I was in Colombia traveling with the un-tour travel company Monograms, a company that specializes in making travel a little easier for the independent traveler. As a result, I had plenty of free time to do whatever I wanted while in Bogota, and the food tour was near the top of my to-do list. After spending a few hours walking around the downtown core with my guide, I can happily say that my hunch about the foodie side of Colombia was correct and the bites I enjoyed weren’t just delicious, but they taught me a lot about Colombian culture as well. Here are some of the many foodie highlights I enjoyed both on the food tour and throughout my time in Bogota. 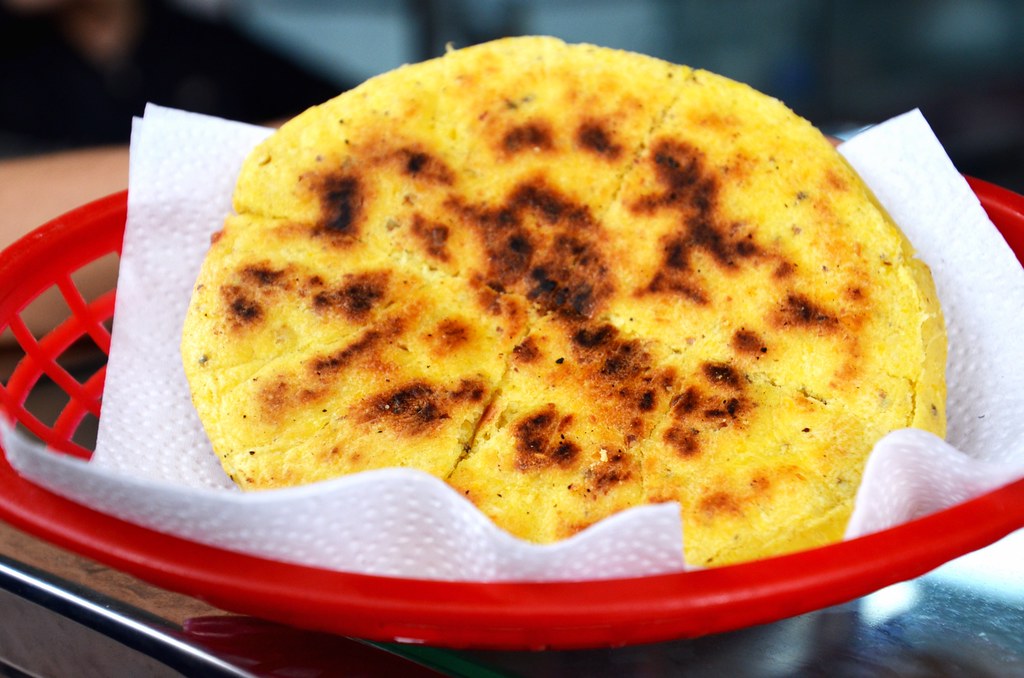 One of the most popular foods in Colombia, there are more than 32 different versions of arepas around the country. Like all great comfort foods, arepas are also incredibly simple. Made from a corn-based flour, these small disks of goodness are grilled and fried before being served. In Colombia they are filled with cheese and sometimes other ingredients depending on where you live. That’s actually why there are 32 different versions of the arepa, they vary not just from region to region, but even town to town. The cheese varies and in some places like Cartagena a boiled egg is even included. Many folks eat them as breakfast along with a cup of hot chocolate, but they’re sold and eaten throughout the day. I tried many of these easy to eat snacks in Colombia and when freshly cooked, they taste like the best grilled cheese you’ll ever have. Yes, the cheeses included and sizes of the arepas change, but it’s that combination of fried dough and cheese that has made it the insanely popular dish that it is today.

In Colombia, most of the traditional foods are corn based, all variations on a theme really. That’s certainly true of the empanadas I tried in Colombia, but these filled pockets of dough are also common throughout South America. The Spanish brought them when they conquered and the convenient meal has since spread throughout the continent. How it is cooked and what’s included changes based on location and in Colombia that means a variety of ingredients, depending on the region. In Bogota, since it’s the capital, they had a variety offered almost everywhere but one of the most popular includes chicken, rice and a diced hard-boiled egg. Eating one as a lunch on the go, these fried treats are filling and make the perfect meal.

Probably one of my favorite snacks in Colombia, it’s also one I had never heard of before. Said to have been created by Italian immigrants, these pop in your mouth bites are limited only by the imagination of their baker. Another corn-based food, the filling makes all the difference. Cheese is the most common and like the arepas are often dunked in hot chocolate, a curious but popular taste combination throughout the country. I also stopped at a stand in Bogota that sold dessert versions filled with guava or arequipe, a kind of milky caramel. When eaten still warm there’s nothing better and I quickly understood why some folks call them the Colombian bagel.

Even before traveling to Colombia I knew that this popular dish was something I had to try, for the novelty if no other reason. Pairing cheese and hot chocolate doesn’t seem to make a whole lot of sense at first but believe me, there’s nothing else quite like it. To first sample this Colombian favorite, my Monograms Local Host took me to one of the oldest cafes in Bogota, the La Puerta Falsa. Serving up delicious sweets and light meals since 1816, this small establishment has the Chocolate Santafereño down to a science. Sitting there at the counter, the waiter brought the plate and I couldn’t wait to get started. A large cup of hot chocolate is surrounded by milky bread and cheese. It has to be a mild cheese though that won’t dissolve. Simply tear the cheese and bread, put them in the hot chocolate and start enjoying. The goal isn’t for the cheese to melt, but to get soft and the high-calorie combination was one of the best things I tried in Colombia.

Walking through a large market in Bogota, my senses were nearly overwhelmed by the variety of items on display. Flowers, trinkets and of course food, all waiting to be bought and sold to local residents. Great food halls though also serve up at least a little prepared food, and in Bogota that meant enjoying a plate of lechon for lunch. Making lechon is a process. A whole pig is stuffed with rice, onions, peas and spices and is then slow cooked for 8-hours. The resulting mix of meat and other savory components is filling and delicious. The small cart at the market served directly from the pig, a little off-putting at first, but at least I knew it was fresh. 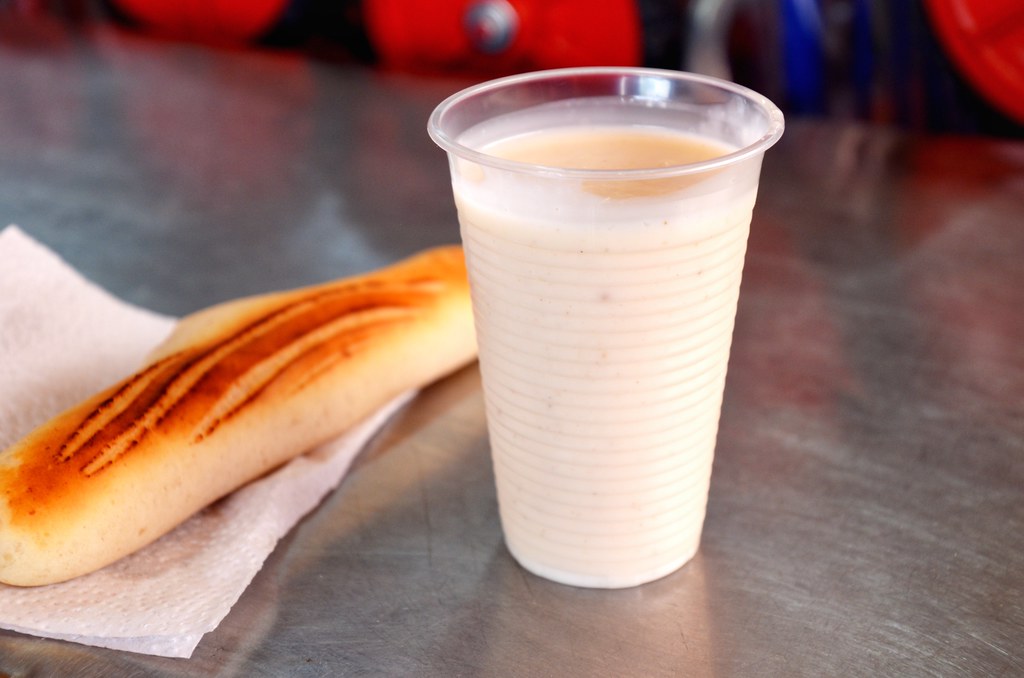 When I first saw it, I honestly wasn’t sure to make of it. A white frothy drink, my guide said it’s how he starts his morning every day and when I heard it was some sort of oatmeal drink, I was even more skeptical. But then I tried it and immediately fell in love. Less of a healthy drink and much more like a milkshake, it’s easy enough to make. Oats are simmered with milk, water, cloves, cinnamon and sugar to create a smoothie-like concoction. It’s chilled and blended and the result is a delicious treat that I’d prefer to have as a dessert instead of a breakfast beverage. 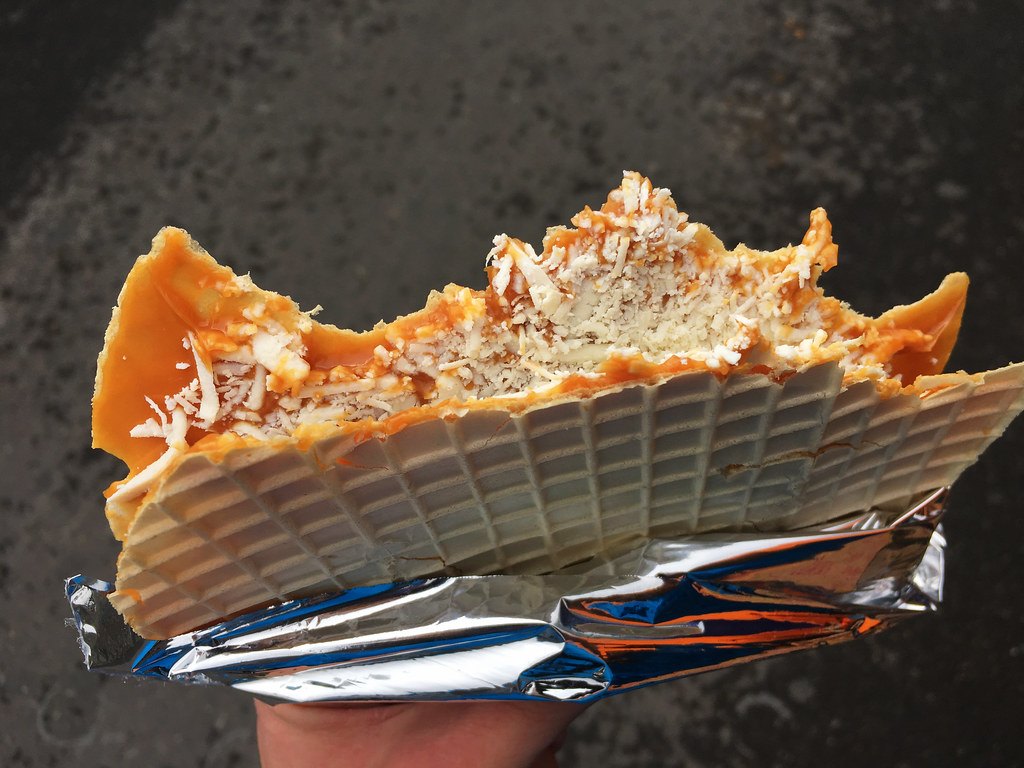 I have an incredible sweet tooth, which is why when I first visit a new country, I’m most curious about the local desserts. One of the best I tried was on the streets of Bogota, sold from a simple cart and made to order. Obleas are sort of like the Colombian version of a crepe, but with a texture all their own. Thin wafers are smothered with a variety of toppings, traditionally though the base flavor is arequipe (dulce de leche) with other accompaniments including cheese, fresh fruits and more. I went with the standard, which is the delicious arequipe with cheese. Colombians add cheese to some pretty strange foods, but in this case it was the perfect combination of flavors.