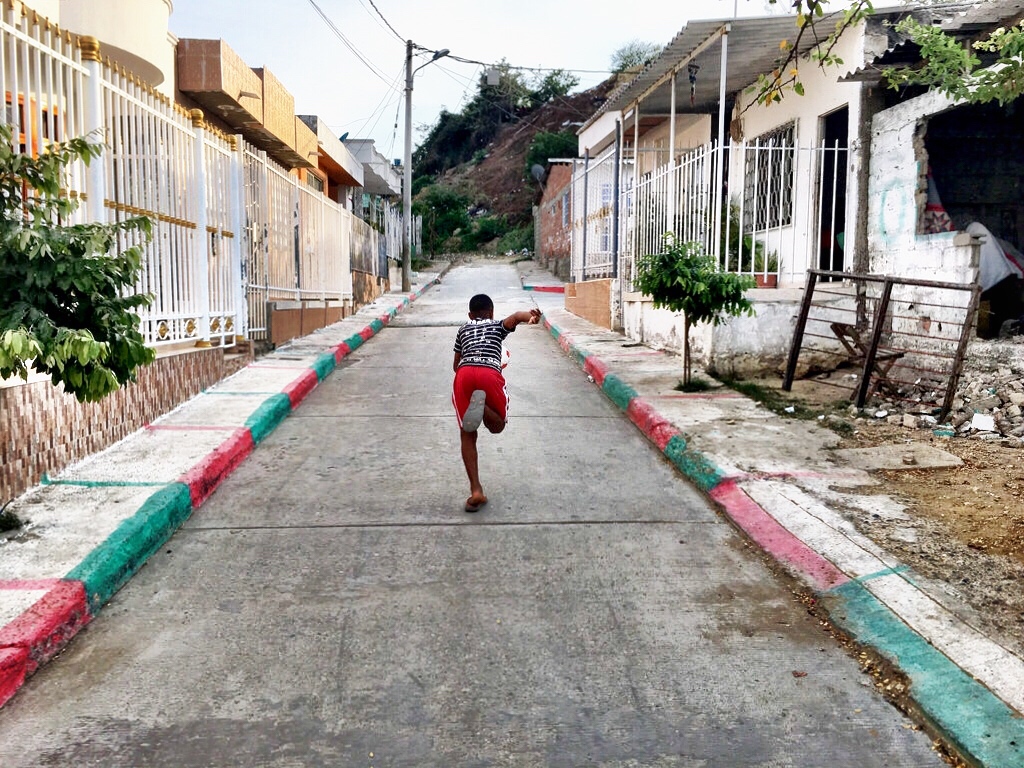 I’ve taken scores of walking tours on 6 continents; had one been offered on Antarctica I would’ve joined that too, so I’m fairly familiar with how they run. But nothing prepared me for the deep travel experience I enjoyed while in Cartagena, a tour that wasn’t a tour, not really. I’m working with Context Travel throughout the year to highlight some of their tours around the world, but I’m certainly no stranger to their walking tour experiences. I’ve been patronizing them for years because, unlike so many other companies, they offer walks that are completely different from anything else offered. As one of their Deep Travelers, I’m proud to say that Context and I both agree that travel is an education, one born from a natural cultural curiosity. It’s about connecting with new places and especially those individuals who these destinations home, transforming a trip from a simple holiday into something truly impactful. But even that doesn’t fully encapsulate my afternoon spent on a Cartagena Barrio Tour. 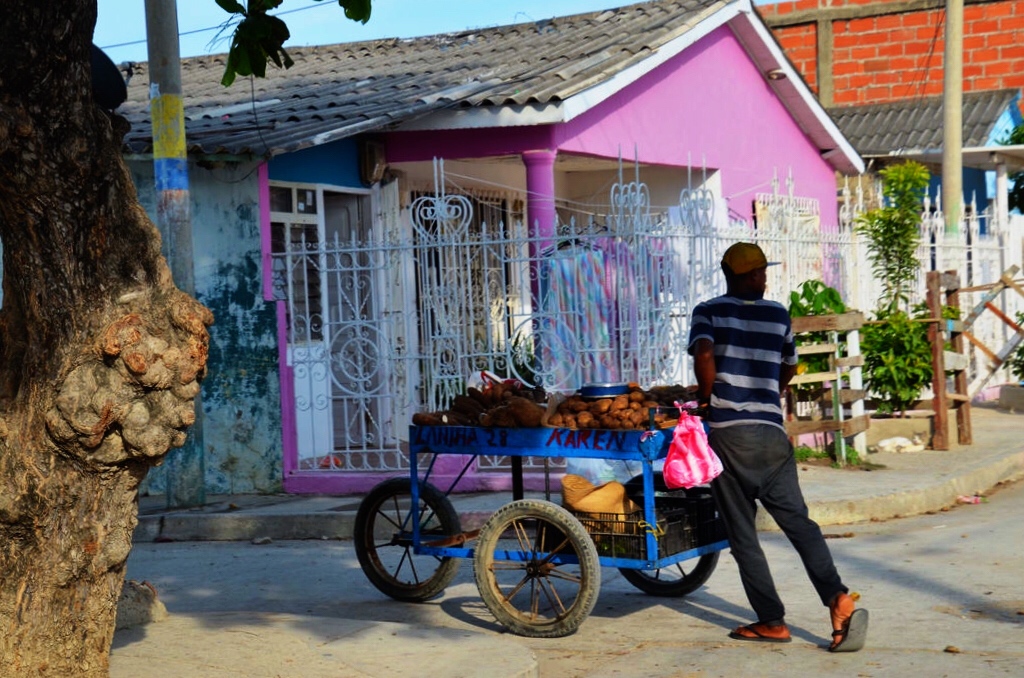 It was another typically bright and warm afternoon in Cartagena; I can’t imagine the weather is ever anything other than perfect in this coastal city. I was waiting for my guide that day, one of the most well known tour guides in the city – Alex Rocha. Alex isn’t locally famous just for his love of the city and his own ability to share that love with others. He’s instantly recognizable for his commitment to making it a better place, for improving the city and the people who call it home. At least that’s what I had read earlier in the day preparing for an experience about which I was honestly a little nervous, spending the day in one of the city’s poorest neighborhoods, the San Francisco barrio. 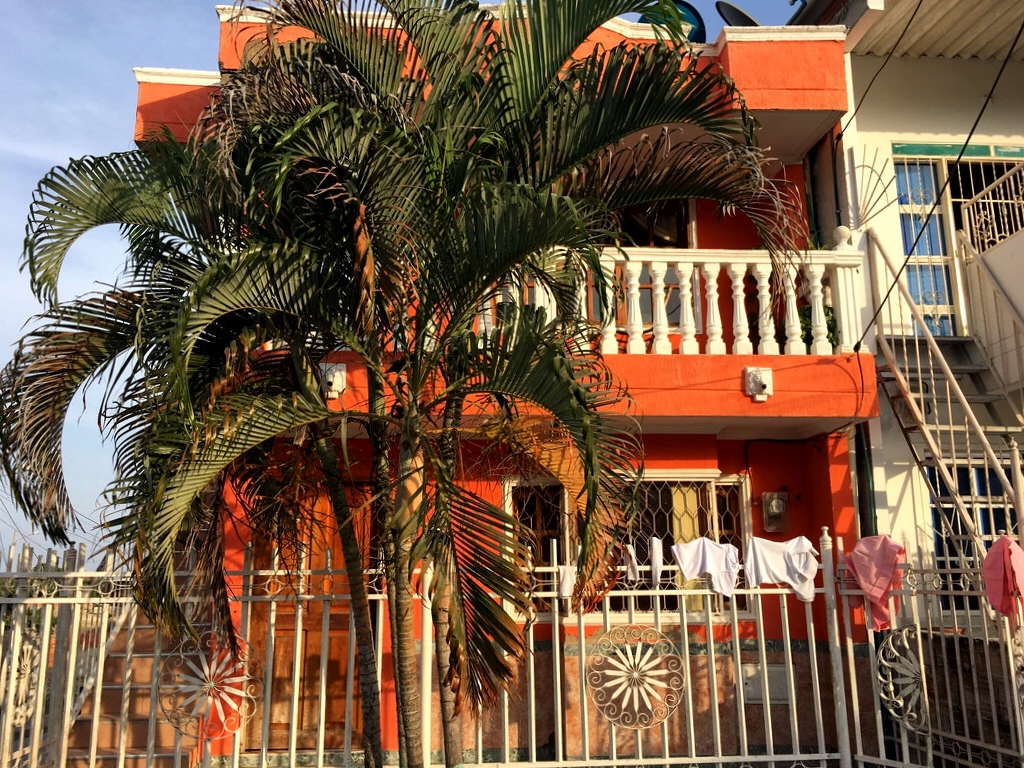 One of the most underserved parts of Cartagena, this is an area that no tourists see, and yet I think it’s an essential aspect to better understanding the complex social composition that defines the city. So much more than beaches and colorful buildings, Cartagena is a large city with a very long history. Part of that history is the incredible influence of Colombian Africans, descendants of slaves brought to the city centuries ago. Many of these descendants call San Francisco home and it was the focus of my time with Alex. 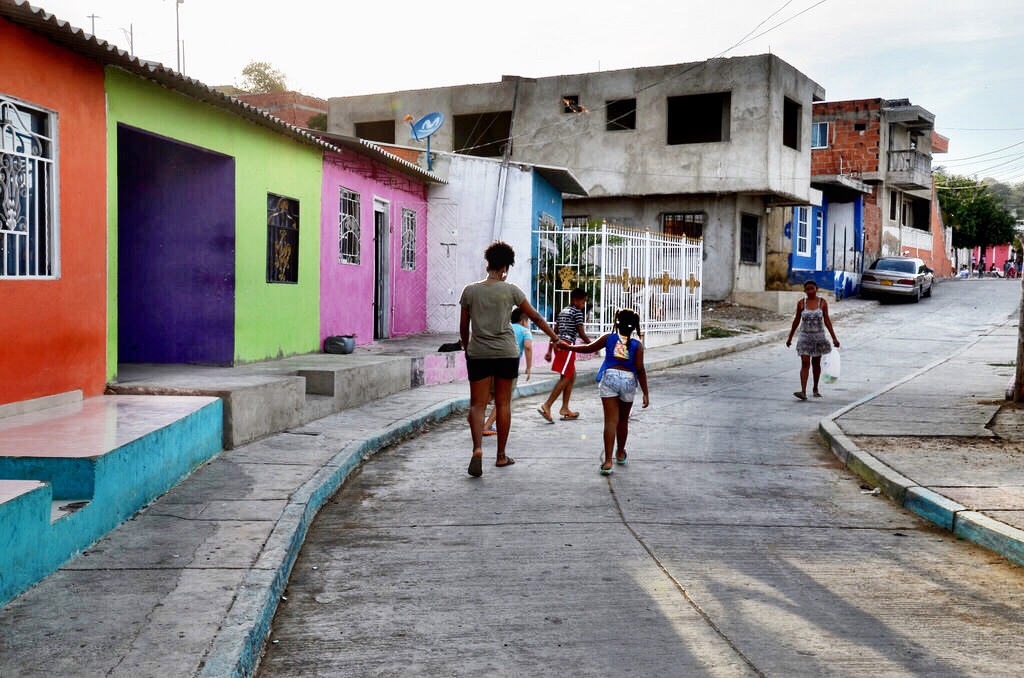 I’m what I like to call an extroverted introvert. At one point in my life I was all extrovert, but over the years that has slowly changed. So while I love being in large groups, meeting new people one-on-one can for me be at first a little awkward, but none of that normal awkwardness existed with Alex and his daughter who met me in the beautiful and super touristy Plaza de San Pedro Claver. From there we drove out to his home, deep in the San Francisco neighborhood. Although right next to the main airport, no tourists come here because there’s no reason frankly. One of Cartagena’s many marginalized neighborhoods, crime, drugs and prostitution have plagued this and many other neighborhoods around the city, but of course that doesn’t mean that these barrios are all bad. Far from it, these places are where the vast majority of Cartagenians live and to spend time there, doing nothing more than experiencing a normal afternoon in the neighborhood is one of the best lessons for any newcomer to the city.

Part of Context Travel’s Deep Travel initiative, the real focus of spending time with Alex is to see his innovative Youth Center. He started the Center in his home a few years ago as a way to help the kids in his neighborhood not only get off the streets, but to give them the skillsets they will need in order to truly succeed in life. Alex’s own background is one that he’s trying to prevent. As a youngster, he too went down the wrong path in life but fortunately he pulled himself out of it and it’s that opportunity the youth center is trying to provide to the next generation. Cartagena is a tourist city, which is why teaching English to the kids in San Francisco is a major focus of Alex’s center. But it’s so much more than that. These kids don’t learn in a bubble, they share what they learn with everyone else in the community, but it’s not just about perfecting English skills. Using Alex’s own family as mentors, the kids learn about how to succeed in life. What it means to do well in school and out of school and frankly, just how to be a better person. Alex’s kids are some of the most well put together individuals I’ve ever met and their own intellectual curiosity inspired me, as it must also inspire the students. The center nurtures and cares for the students, feeding kids who need a decent meal and, more importantly, feeding their souls as well. Alex and his family teach the kids values and gives them everything they need to succeed in life both professionally as well as personally. I saw all that, no doubt, but I also saw a lot of happy kids. 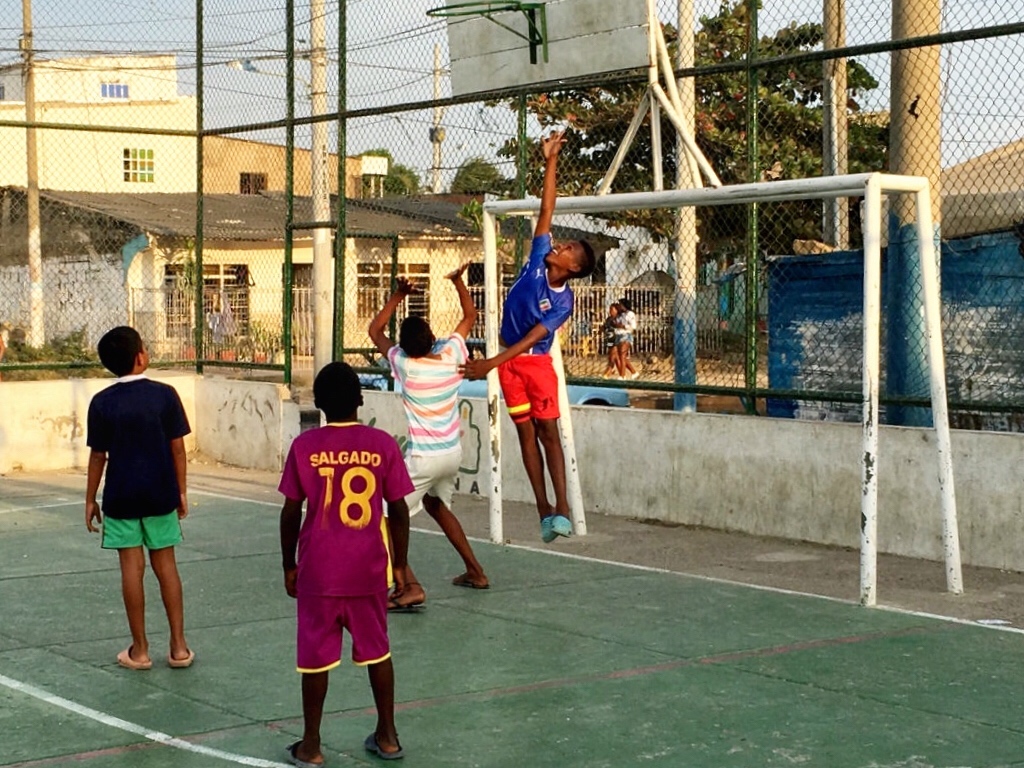 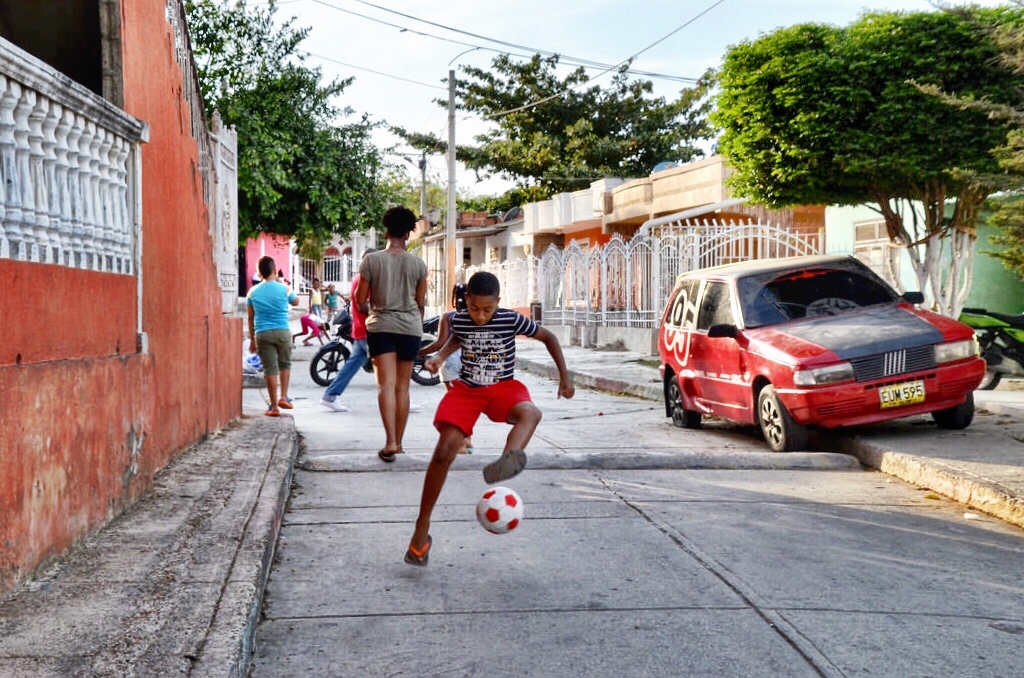 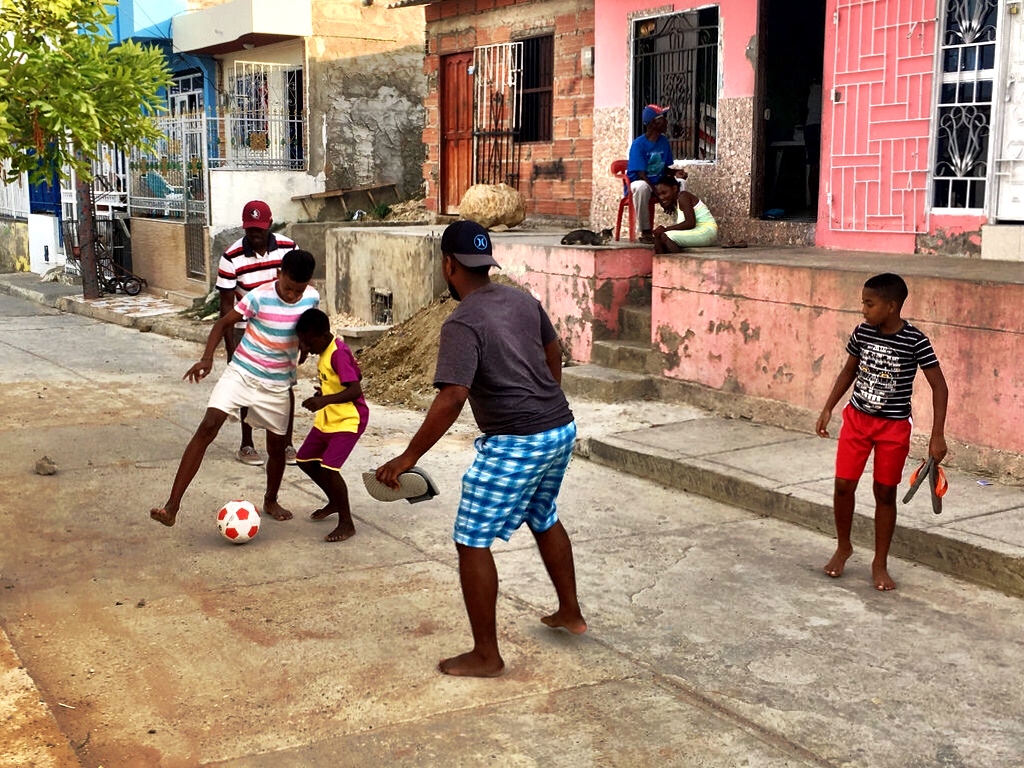 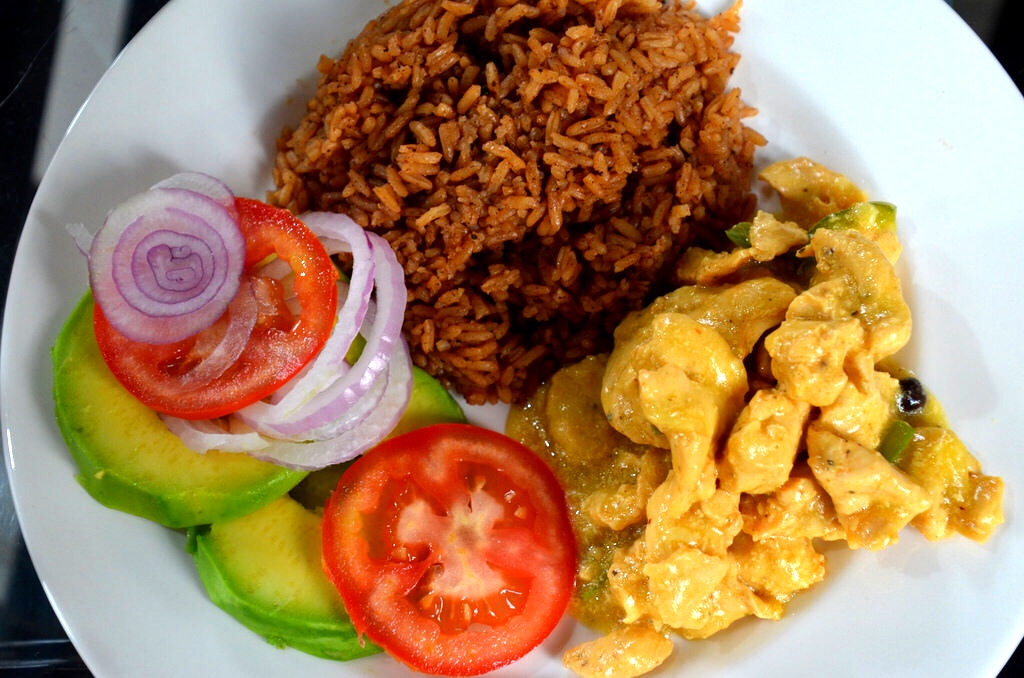 Playing a pickup game of soccer in the street, I couldn’t help but notice as neighbors came out to sit on their porches to watch. Every small house is fenced and gated, to keep the occasional violence away from their lives. Walking around the neighborhood Alex gently suggested I leave my camera at his place, not wanting to attract more attention than a 6’2” white guy already would. Sure, Alex and his family lead happy and healthy lives and those kids they’re teaching, they too are on the right track. But that doesn’t mean the entire barrio is rainbows and kittens. Makeshift bars and clubs lure in teens and young adults where all-day drinking quickly turns into rowdiness and the eventual violence. It’s a vicious cycle of unemployment, cheap drugs and alcohol and violence. It’s a cycle though that Alex has worked very hard to break.

After finishing up an amazing meal lovingly prepared by Mrs. Rocha, I gathered my things and said a sad goodbye to the Rocha clan. On the way back Alex and I chatted, but I spent most of the time lost in thought. I had no idea what to expect from this most unique travel experience offered by Context, but whatever I had expected was quickly surpassed. This is in no way your average walking tour, it’s something entirely different and much more meaningful than those sightseeing jaunts. This was about understanding, something few of us manage to do when traveling, myself included. We see, sure we see lots of things. We even experience, but very rarely do we ever truly understand. We don’t venture off the well-trodden path, instead we follow the same routes traversed by millions of tourists before us. We visit places as if they existed in a perfect bubble; a real-life snow globe into which we walk for a short period of time. But no place like that exists, every city and neighborhood has plenty of stories to tell, stories of life, love and a reality that many of us frankly don’t even want to see. Millions visit Cartagena every year where they bask in the sun and have a few too many beers. And that’s fine, it’s their vacation and if that’s what they want to do, then they should do it. But there’s so much more to Cartagena than the perfectly maintained colonial Old Town. I saw it when a local took me out to the largest market in town, a vast labyrinth of stalls and people the likes of which I’d never before seen. But even then I was still a voyeur, like an anthropologist taking photos and notes. No, it wasn’t until I spent a few hours with Alex that I made the transition from voyeur to active participant and that, more than anything else, is the entire point of the Context Deep Travel Program. These projects are usually in collaboration with the Context Foundation for Sustainable Travel and they support local cultural preservation programs, like the one I experienced in Cartagena. Half the proceeds of my ticket go back to Alex, which the Foundation then in turn matches. That’s money into the coffers of the Center, allowing it to continue teaching neighborhood kids everything from English to computer skills. But it’s about so much more than the cash. It’s about connecting in a way that is exceedingly rare in the travel experience, but one that is key to our understanding of a new place. Programs like the Cartagena Barrio Tour transform destinations for us, helping us understand all facets to these touristy places and in turn forcing us to appreciate them on entirely new levels. It makes travel more important somehow and definitely more valuable. Travel is always an investment and it’s up to us to maximize that investment of time and money. It’s up to us to be curious and to look around every corner always asking questions.

We won’t have these moments of clarity on every trip, nor do I think we should to be honest. But when they do happen they are important in ways that may take weeks or even months to fully understand. They change us as individuals at a very fundamental level, which has always been my own personal allure to the world of travel. Sure, I love sitting by the beach (sometimes) but ultimately I travel to learn, to explore and to make myself a better person. It’s a selfish pursuit but if more of us did this, if we became more tolerant and understanding then the world would be a much more pleasant place in which to live.