As always, when I get home after a trip one of the first things I do is to upload photos to my various accounts and to review what images may be on my phone. The best of those images, in my opinion, of course end up on Instagram – an important platform for me in terms of sharing the travel experience. I love the creative freedom that Instagram provides both in terms of imagery, but storytelling as well which is why today I want to share those images and stories with you, to help further define what it means to visit cold but beautiful Alberta in the wintertime.

I started my trip in Calgary, a city I’ve passed through before but never really explored; something I wanted to change this trip. To help me capture the best of the city I was VERY fortunate to have Instagram legend and local resident @Scottcbakken take time out of his day to share what he loves most about his city. That kind of local perspective is priceless and it’s also how I found myself here, at Calgary’s Peace Bridge. Opened in 2012, this at-times controversial pedestrian bridge has now been fully embraced by the community and thousands cross every day commuting to and from work. Its unique design makes it more than just a bridge, it’s a destination in its own right and was just one of many highlights of my afternoon exploring the city.

Wolfdog – hybrid between a domesticated dog and a variety of species of wolf. When I heard that Canada’s only wolfdog sanctuary was located just outside of Calgary, I knew I had to visit. The mission of the remarkable Yamnuska Wolfdog Sanctuary is fairly straightforward: to rescue and rehabilitate wolfdogs and to educate the general public about these beautiful pups. For whatever reason, some people see status in buying a wolfdog, but as the dog gets older they realize that there’s no way they can take care of them. So they end up at shelters or worse, euthanized because no one knows what to do with them. That’s where the Yamnuska Wolfdog Sanctuary comes in and spending the morning on one of their interactive tours was as much fun as I’ve had in a long time. As the owner of Siberian Huskies, I felt a certain kinship to these amazing wolfdogs, one of which even looked like a twin to one of my furry kids. The Sanctuary is about more than playing with the dogs though, education is at the heart of the experience. Convincing people that these probably aren’t a great house pet but also letting people know that the wolfdogs aren’t dangerous, both goals are incredibly important to make sure these dogs don’t suffer needlessly and enjoy happy lives. That’s one of many reasons why I wanted to share this photo, to raise awareness about the Sanctuary and wolfdogs and to certainly encourage you to visit the next time you’re in this beautiful part of the world.

I’m always thrilled to be back in my happy place – the Canadian Rockies; more specifically, gorgeous Banff, Alberta. I’ve been fortunate enough to have traveled through both Banff and Jasper National Parks a couple of times, and I was so happy to be back, this time in winter. Of course I had to start my visit with the region’s most iconic activity – taking the waters at Banff Upper Hot Springs. n 1882, Canadian Pacific Railway workers discovered the Banff hot springs, which led to the creation of Canada’s first national park in 1885, Banff National Park. After several fits and starts (and fires) the Upper Hot Springs bathhouse was finished in the 1930s in a style meant to rival the famous spas of Europe. That same style and spirit persists today in spite of several refurbishments, plunging the guest back into the heyday of taking the waters like a well-heeled member of the fin de siècle elite. There’s nothing quite like bathing in the warm waters, gazing out across the beautiful mountains as frost quickly forms in your hair. Although simple, it’s also a special experience and I quickly understood why the waters have been drawing visitors from around the world for generations.

While in Banff I stayed at a legendary hotel that I have wanted to visit for a VERY long time, the Banff Springs Hotel. Often copied but never duplicated, the Banff Springs first opened way back in 1888 by the Canadian Pacific Railway, one of the luxurious railway hotels that dot North America. From the very start it was known as a bastion of luxury and that first year the hotel had 250 rooms and charged a whopping $3.50 per night. It was later transformed into the magnificent structure we see today, tailored after a Scottish baronial castle made with thick limestone blocks. Perfectly positioned not only to take advantage of the hot springs, but the views for which Banff is so now very well known. As soon as I entered the Rockies, a broad smile crept up on my face. This is truly God’s country, a beautiful part of the planet that I believe is almost completely unrivaled.

Before leaving Banff, I joined a local tour company for a morning tour around Banff National Park. I’m not totally comfortable driving on snowy roads and I wanted an expert to show me the best spots, so it worked out well. Not only did she show me the perfect places for my photos, but I learned a lot about the history of Banff along the way and enjoyed access to amazing sights like this one at the Hoodoo Lookout. I’d seen hoodoos before in Southern Alberta, and honestly didn’t expect to see them up in the mountains. They’re strange-looking pillars created by years of erosion, but that wasn’t the highlight of this particular stop. No, it was the amazing views of the Bow Valley and Mount Rundle, all deadly silent in the midst of yet another snowfall. It was a beautiful scene and one I didn’t expect, but as is usually the case it was one of the highlights of my brief but always amazing time spent in beautiful Banff. 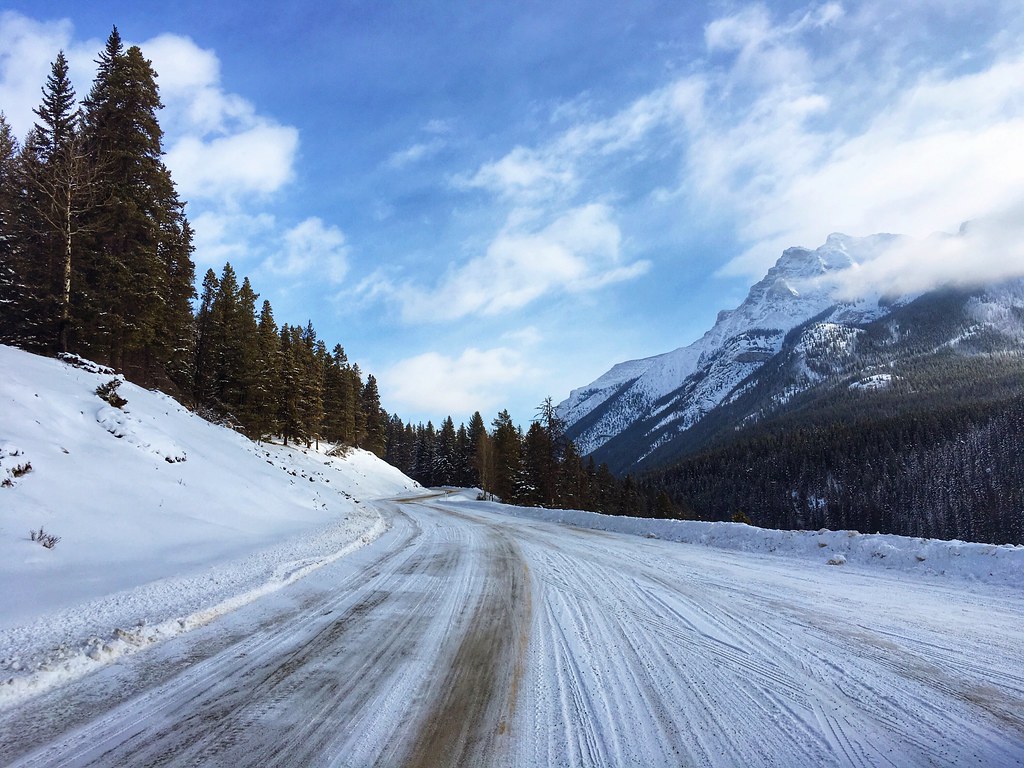 A lot of people ask me why I go to certain destinations when they’re stuck in the middle of winter. Northern Finland, Norway and yes, even the Canadian Rockies, I know these places are gorgeous in the summer but they enjoy a certain kind of beauty in the winter months. I believe that cold-weather destinations should be seen when it’s actually cold outside. This is how they’re meant to be enjoyed and experienced and while it means bundling up in extra layers, I have never once regretted trekking up north to enjoy a winter wonderland the likes of which I just don’t get at home.

The colorful little town at the heart of the Canadian Rockies experience, Banff. I’m a weird guy, admittedly, and the first time I visited a few years ago it was primarily because it has a silly name. Great reason to travel, right? Well, it was a fantastic decision and in the intervening years this part of the world has become very important to me. But there’s no mistaking it, Banff is a tourist town, existing to service the millions of people who visit every year. But just because the main street is lined with restaurants and souvenir shops doesn’t mean there still aren’t special moments to be had, there are and it’s almost entirely thanks to the people. Like many resort towns, people from around the world are attracted to Banff for the beautiful landscapes and the chance to ski and snowboard whenever they want. It’s not uncommon to find that your restaurant servers, hotel workers and store employees are from all four corners of the planet. What does this multiculturalism mean? Well, it’s a lot of fun to chat with these folks, learn more about where they come from and what they’re doing in Banff. I also found them to be incredibly honest, so while you’ll get some great recommendations be prepared for some raucous stories too. Overall, this diversity helps Banff remain a fun place to visit without getting stuck in routine.

One of Calgary’s newest skyscrapers, the Bow Tower is also home to a slightly unusual piece of public art, this sculpture – Wonderland by Spanish artist Jaume Plensa. Looking at it from a distance I could obviously tell that it was a young girl’s head, but it seemed solid. It wasn’t until I got up close when I realized that it was made from a steel mesh, greater details becoming clear as I stood in front of it. It’s also an interactive piece, with two openings that allow visitors to walk through, to literally become part of the artwork itself. I’m not normally one for modern art, but even I couldn’t help but be impressed by this graceful piece. Doing some research I learned that the artist said he wants Wonderland to inspire everyone who experiences the sculpture. He believes that the architecture of our bodies is the palace for our dreams. A captivating concept and one that is perfect for Calgary. With public art found throughout the city, it’s a fun place to explore if only to discover these special moments.