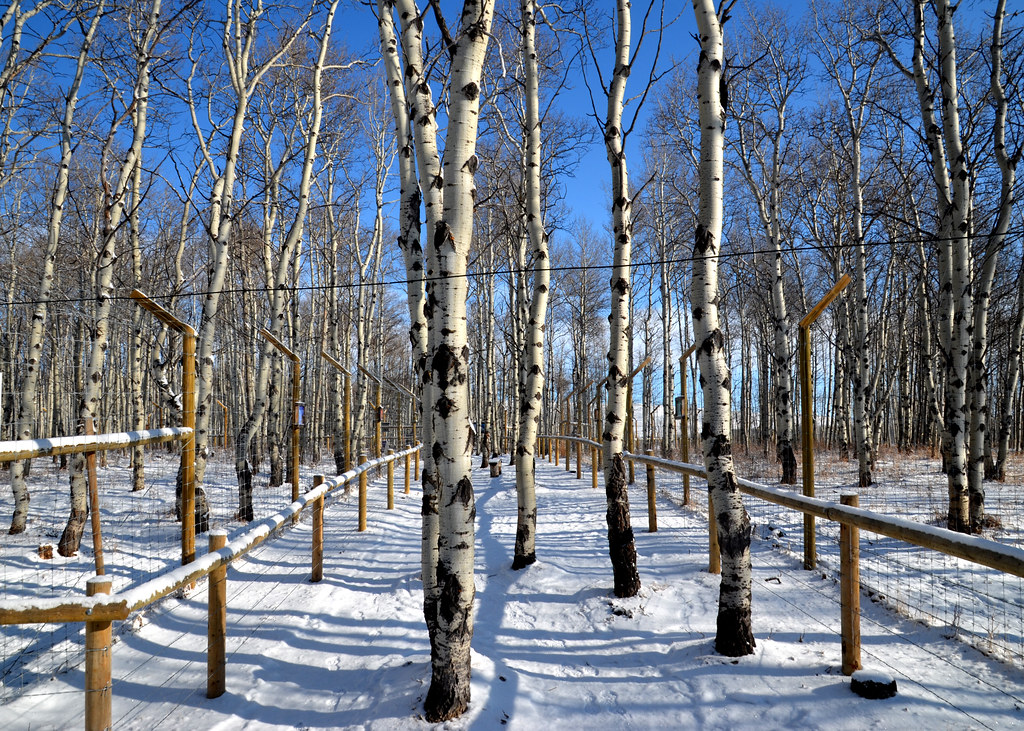 Cold is just a fact of life when it’s winter in Alberta. This isn’t a beach holiday, but that’s not what I wanted. Honestly, I would have been a little disappointed had there not been a fresh layer of snow on the country road as I drove up to the front gates of the Yamnuska Wolfdog Sanctuary. An easy 45-minute drive from Calgary, not too far from Canmore, I was excited because before even meeting my first wolfdog I knew that my morning spent at this remarkable facility would be a highlight of my time in Alberta. As the owner of three dogs, including two slightly wolfish Siberian Huskies, I’m always drawn to dog-related activities when I travel, but of course Yamnuska is a lot more than that. 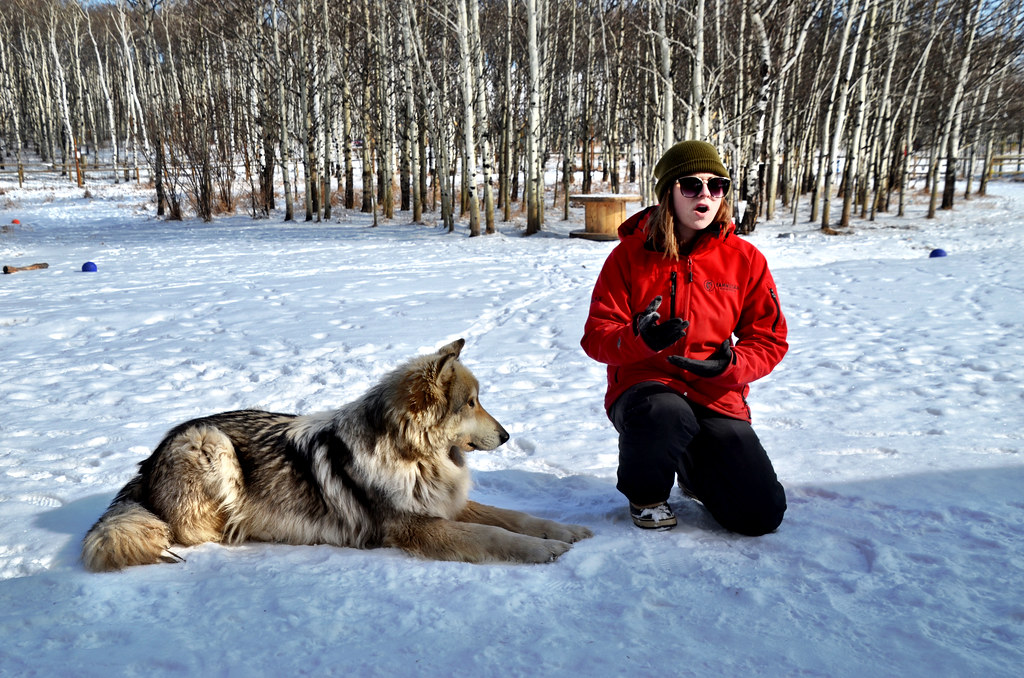 Even I, someone who frankly knows a lot about dogs, was completely unfamiliar with the wolfdog. Before my visit I assumed it was just another term for a wolf, but I quickly learned that is very wrong. An increasingly popular (and unofficial) breed of dog, the wolfdog is just what it sounds like – a cross between a wolf and a dog in any percentage. (Mostly dog, mostly wolf, 50-50 and so on.) It’s a curious mix, but their popularity is on the rise for a few reasons. They’re beautiful, and as puppies look like stuffed animals come to life. It’s the same problem from which Huskies suffer actually. They’re so gorgeous that everyone wants one, not quite realizing the commitment required. Second, they are sadly a status symbol. Burly manly-men want to be able to tell people that they own a wolf, it’s a macho thing I guess. Sadly though, the result is the same. Not even these butch-types are prepared for what it means to own a wolfdog. The result is fairly expected, the wolfdogs are either put up for adoption or euthanized, both options a disaster for the beautiful dog in question.

Georgina De Caigny and Andi Scheibenstock realized that Canada lacked a proper sanctuary for wolfdogs, an oversight that was increasingly important as the breed became more popular. In 2011 the Sanctuary opened its doors to provide a safe and knowledgeable facility that would make the rehabilitation and rehoming of wolfdogs their top priority. It’s so much more than a rescue organization though, it’s one of the few sanctuaries in the world to balance an adoption program with educational services.

Understanding that the best way to curb ownership of wolfdogs is through proper education, Yamnuska provides tremendous educational outreach opportunities including tours of their facility. Arriving first thing in the morning, I was giddy as I waited for the guide to start the interactive wolfdog experience, killing some time by wandering around the facility beforehand. Yamnuska is one of the largest such centers in the world, and the property is divided into packs based on a variety of factors. Looking through the fence at a quietly dozing woflpup, I couldn’t help but think of my own dogs who sleep the same way. Looking beyond into other enclosures, I noticed some differences though, wolfdogs who looked decidedly more wolfy. Lean and aloof, they paced the edge of the fence, clearly nervous about strangers visiting. It was a curious combination, the big fluffy dogs and the more reclusive wolfdogs and I couldn’t wait to learn more about all of them. 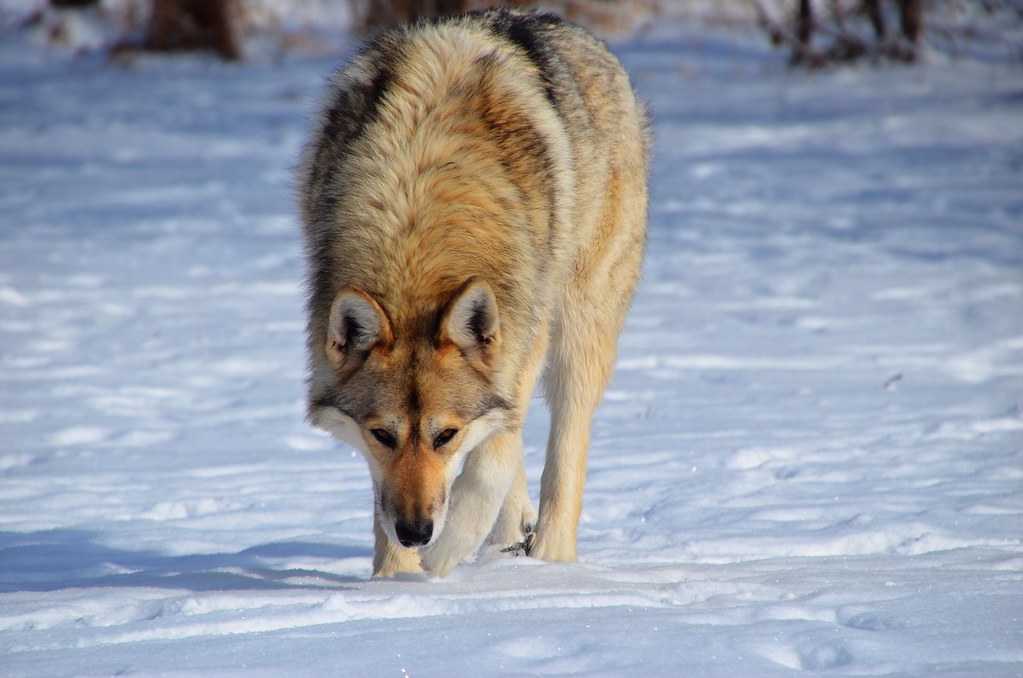 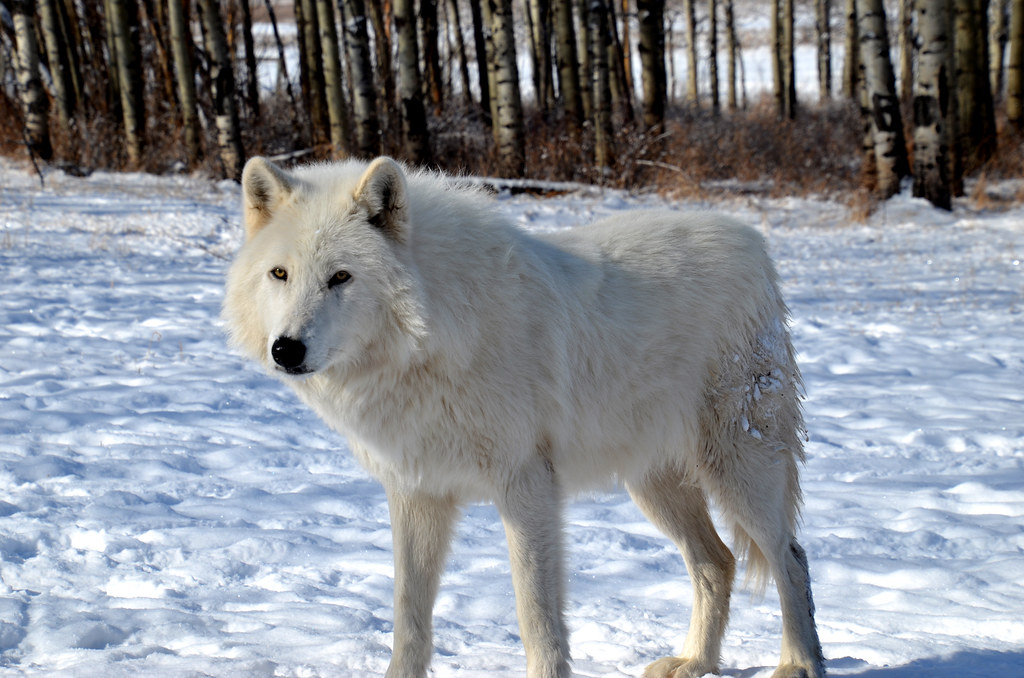 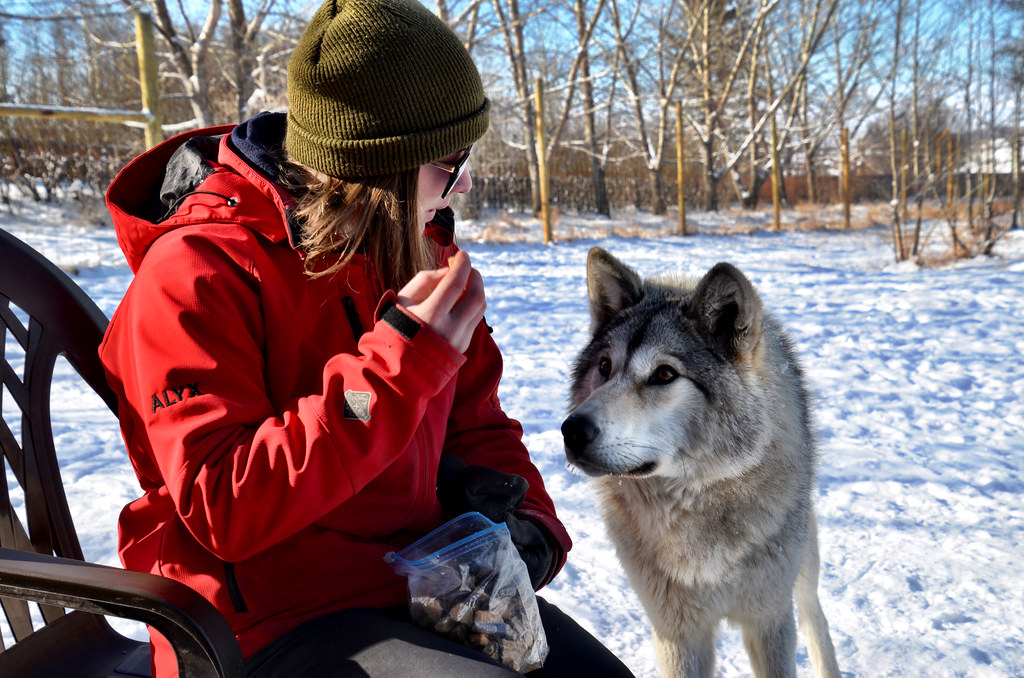 Escorting the group of curious visitors into the first enclosure, the guide handed out dog treats as we all took a seat in the chilly weather. Wolfdogs aren’t inherently more dangerous than any other dog and if they have a high percentage of wolf, then they’re also more nervous and skittish by nature. In order to help them feel at ease, guests sit and stay relaxed, not out of concern but to make the dogs feel more comfortable. The sanctuary has 18 permanent wolfdogs, 11 ambassador wolfdogs, and any number of wolfdogs available for adoption but it’s the permanent wolfdogs we met with that morning. Sitting there with dog treats in hand, I watched as a virtual twin to one of my own dogs gingerly walked over, clearly scared but also curious about the treats. His name was Nova and had a fiercely white coat belying the fact that he is a high content Arctic wolfdog. High content is just simply the way to refer to wolfdogs that are more wolf than dog, a fact that comes from observation more than anything else. But I found myself falling in love with him quickly, his quiet and aloof spirit reminded me in every way of my own dog Cody, snuggled up on a couch back at home. Several other wolfdogs walked over as our guide shared information not only on the pack, but wolfdogs in general. But it was Nova who stayed around the longest, the bacon in my hands easily combating his own concerns about my presence in his home. It was a fascinating experience, listening to the factoids streaming out while watching the dogs go about their daily lives. Some stayed asleep and others came over for a treat or two, clearly used to the activity. 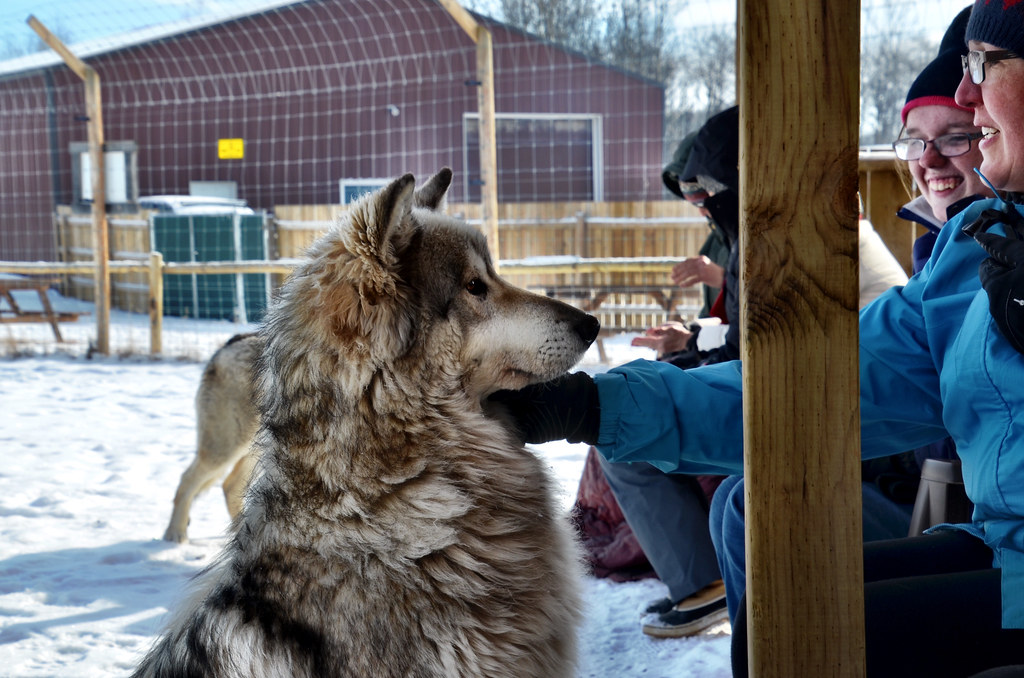 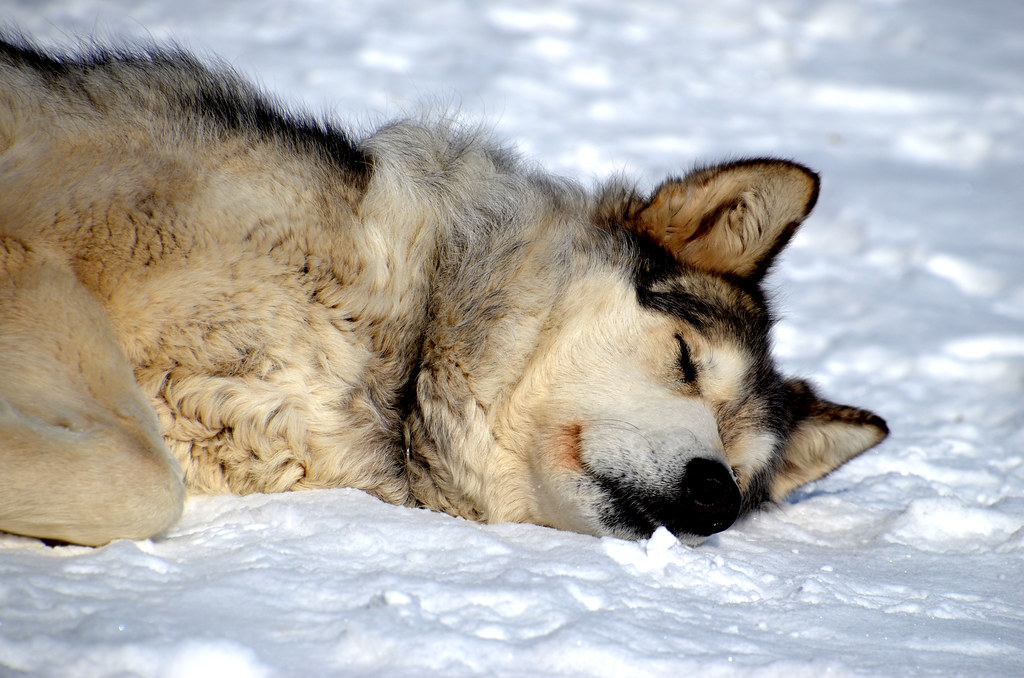 To show us the differences between high and low percentage wolfdogs, we then paid a visit to the decidedly more doggy Cascade pack where those differences were obvious right away. Just like my pups at home, the dogs all came over for some love and all of our food. We could barely sit down before we were inundated by beautiful dogs who all wanted to be petted and fed, not unlike every other dog in the world. It was so much fun giving them the ear scratches I wish I could’ve given Nova and connecting with them on a more personal level. They were hyper, hungry and fun loving, just what you want to see. Our guide shared their stories with us as well, and went into even more detail about wolfdogs and the problems associated with owning them. Wolfdogs can jump higher than fences allowed in residential areas, so unless you have a farm or other special fenced-in area, owning them isn’t even possible from the outset. Add in their size, enormous amounts of hair and any other number of contributing factors, and these are not the house pets you were looking for. What happens then is that they’re given up for adoption or worse; people’s innate fears of wolves come to the forefront when wolfdogs are involved. There’s a lot of misinformation about wolfdogs, but that’s why Yamnuska exists in the first place. 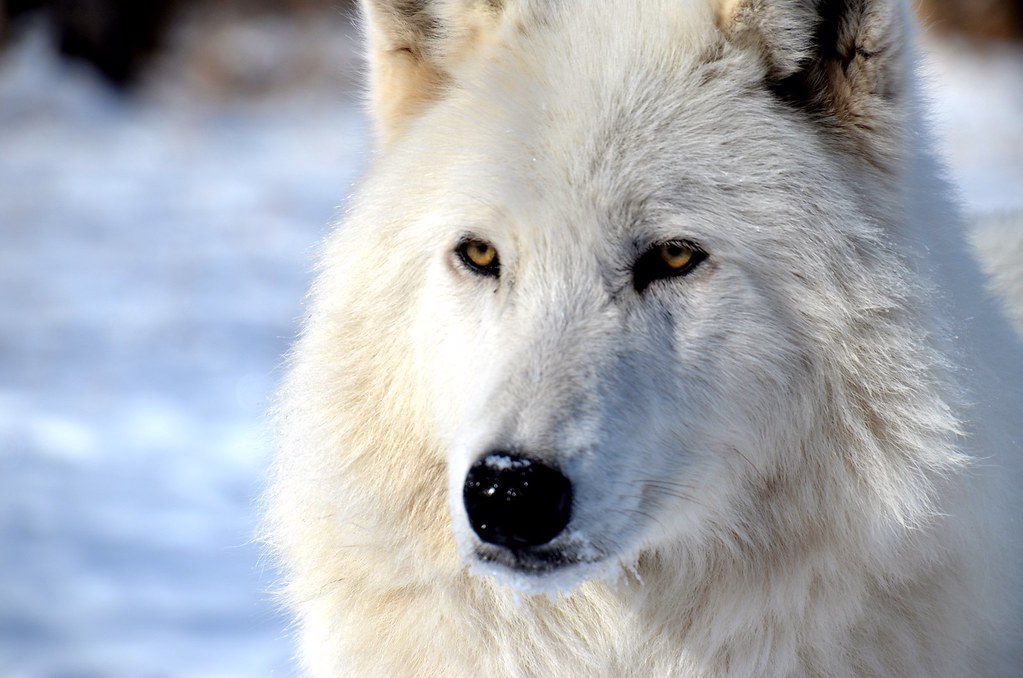 Animal Experiences and the Responsible Traveler

When traveling, it can be very hard to know which animal experiences are and aren’t responsible. Honestly most aren’t and most actually harm the animals involved. Whether it’s elephant rides in Thailand or swimming with dolphins in Mexico, these are not sustainable or responsible travel experiences. Yamnuska is of course different. It is a sanctuary and rescue organization first and tourist activity second. The tours actually serve a couple of different purposes. They help to educate the public about the wolfdog to ease people’s irrational fears and in the process, encourage people not to adopt them unless they are prepared. It also raises much needed money for the rescue; organizations like this one are always in need of more resources and the tours help provide for the dogs.

Visiting Yamnuska was important to me not only because I love dogs and my own Huskies bore a remarkable resemblance to the wolfdogs. No, it was important because I truly believe that the work they are doing at the Sanctuary is important and just to be there is a small part in helping the dogs live happier and healthier lives. No animal should suffer needlessly at the hands of man, and I’m so glad that places like Yamnuska exist to try to do even just a little bit to right that imbalance.