Before first visiting French Polynesia, I knew that there would be some challenges along the way. I don’t mean in terms of service or comfort, that was guaranteed thanks not only to the hotels I patronized but also due to the fact I was sailing on a Windstar boutique cruise around the islands. No, the challenges were entirely personal. While the South Pacific really is paradise incarnate, it’s a region with issues. Unemployment, low wages and a sometimes fractious relationship with its parent country, France, has led to a lot of societal issues many visitors never see. I didn’t want to be just another arrogant American though, spending the night in expensive bungalows and sipping umbrella drinks on the beach without also trying to better understand the culture I was visiting. If all I wanted was a nice beach, Florida has plenty and would have saved me a lot of time in the air. No, I wanted to visit French Polynesia because it IS French Polynesia, it’s a special and unique place and thankfully over the course of a weeklong cruise with Windstar I was able at times to poke through the tourism screen and to briefly see what life must really be like on these idyllic islands.

If you spend any amount of time around Tahiti you will notice the same two things for sale wherever you go: vanilla and pearls. The islands are famous for both and for many tourists they’re fun souvenirs and gifts. Pearls today are still an important export and if you’re into that sort of thing, there are deals to be had. Vanilla is more interesting, at least to me, because it’s not produced for export anymore, not really. The days when Tahitian vanilla was grown, cultivated and sent around the world are long gone and today it’s produced mostly for the tourist trade and to maintain what the government calls an important source of pride and tradition in the islands. And that’s fine, there’s no harm in that and it’s something I’ve seen in countries all around the world. The vanilla is good and I myself even left for home with a jar in my bag. The real takeaway in a tour I took to a vanilla plantation on the island of Tahaa, the so-called Vanilla Island, wasn’t to see how they produce the vanilla. Frankly, it wasn’t that interesting. No, the real value was getting to see life on the island away from the private islands and port-side stalls selling trinkets. Were the small villages humble? You bet, but I’m not here to write about how I felt bad for locals because I make more in a year than they do. No, in fact they probably feel bad for me, that I don’t have the same quality of life they enjoy. That’s right, I’m willing to bet that while poverty is rampant on the islands of the South Pacific, so is happiness and there’s a lot to be said for that. So many times when I visit these pre-arranged souvenir stops on tours, the purveyors of goods are surly. I don’t know whether it’s annoyance, resentment or a combination of both, but if you don’t buy something then they get mean. That of course wasn’t the case anywhere in French Polynesia and certainly not on Tahaa. While some of the other cruise passengers shopped in the small boutique, I sat in a chair, watching everything around me, enjoying some fresh fruit a young girl brought by. It was a nice day (of course) and sitting there was a nice way to spend a few moments. People drove by waving, and in the distance I heard the crowing of a rooster. It was peaceful, it was calm and I imagine it’s how most days on Tahaa are spent. 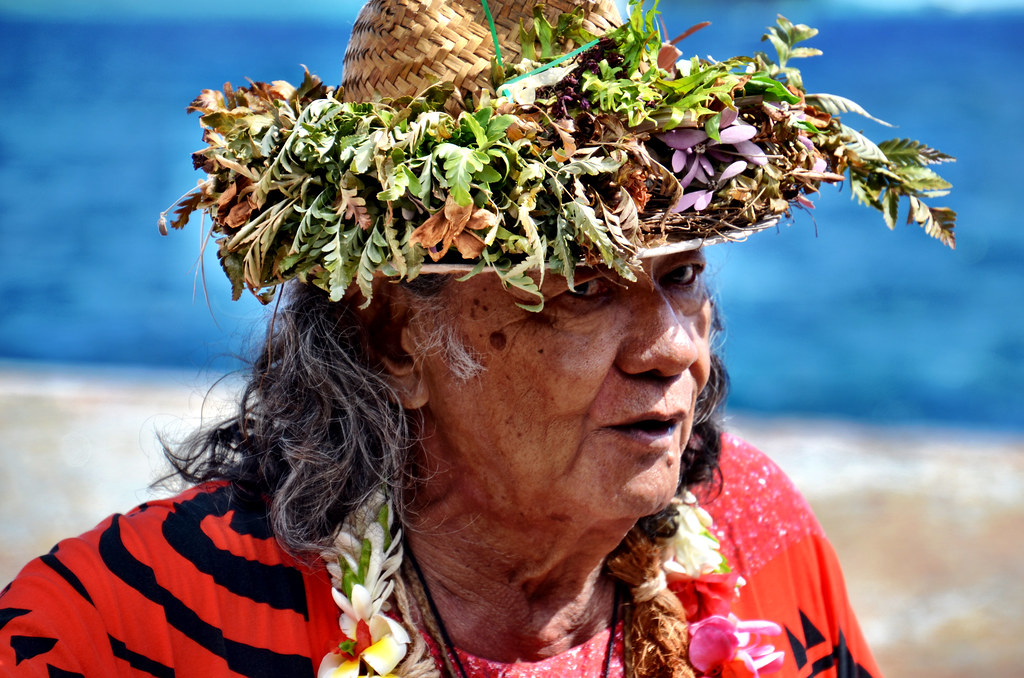 Our guide on this island was a character, that much is without doubt. An older man, he’s called the small island of Raiatea home all of his life and he has the stories to match. Throughout my week with Windstar I joined many excursions, including the one on this small island that takes guests out to explore the only navigable river in French Polynesia followed by some relaxing time on a private island or motu. What the excursion description didn’t include was the hours of commentary by the most interesting person I met during my week exploring the South Pacific. I’m pretty sure most of what he said was embellishment, at least I hope it was, but his stories were without a doubt entertaining. Within those fanciful tales though were nuggets of truth, laughter masking some difficult times in his life. The youngest of nearly 20 children, he went on to sire almost as many himself and his family must be the size of a small village. Preferring to call the island’s interior home, for most of his life he existed without what many of us would call necessities in life. And yet, he was one of the happiest people I’ve ever met. He lived for and in the moment and as long as he had something in his belly and a few bucks for a beer, there wasn’t really anything else he cared about. Maybe it’s a little rosey-eyed of me, but I’d like to think that this ethos, this way of thinking about the universe wasn’t unique to him, but rather is an undercurrent in the region. Maybe that’s why it’s been a siren call to so many people from around the world for so very long.

I hate articles that address developing countries from the viewpoint of a privileged Westerner. How we admire the strength of spirit found in those with less money than we have. I think it’s disingenuous and almost colonial in the mindset. With that being said, spending a day driving around the large island of Tahiti provided a nice window into daily life on this most visited of the Society Islands. If you’re visiting the South Pacific, then you will fly into the capital city of Papeete. What most people don’t do is spend a lot of time on the island, opting instead to visit more remote and more picturesque islands in the group. While I whole-heartedly recommend visiting both Moorea and Bora Bora, I also firmly believe that it’s important to spend some time on Tahiti itself, experiencing life on this sometimes overlooked destination. I booked a day tour that included a drive around the island with many stops at scenic spots along the way. I had a day to kill frankly between the end of my cruise and my evening flight and it was the most productive use of my brief time. Turns out, it was one of the smartest decisions I made on the entire trip. Seeing the waterfalls strewn about the island and the many coastal panoramas was of course great, but it was the final stop of the day that meant the most. Venus Point is the famous spot from which Captain Cook moored in order to observe the century’s second transit of Venus, the sole reason he was in the region to begin with. Today the beach and surrounding area is a gorgeous spot on the island’s north coast and when I was there, it was packed with people. I asked the guide about the popularity, it wasn’t all that convenient for tourists to be honest. He said it was mostly locals or people staying on the island for a long vacation and I approached the site with a different perspective. Kids were running around chasing their dogs, teens were skateboarding and couples were unpacking lunches on the beach. I was allowed into something rare when we travel, I was part of the local community, if only very briefly. I’m not saying that I instantly connected with the Polynesian culture and spirit at that moment, I didn’t. But it was nice to be privy to daily life on the island and, when combined with a day spent driving around Tahiti, helped paint a more realistic version of the island than I would have ever had if I’d only stayed within the confines of a resort. 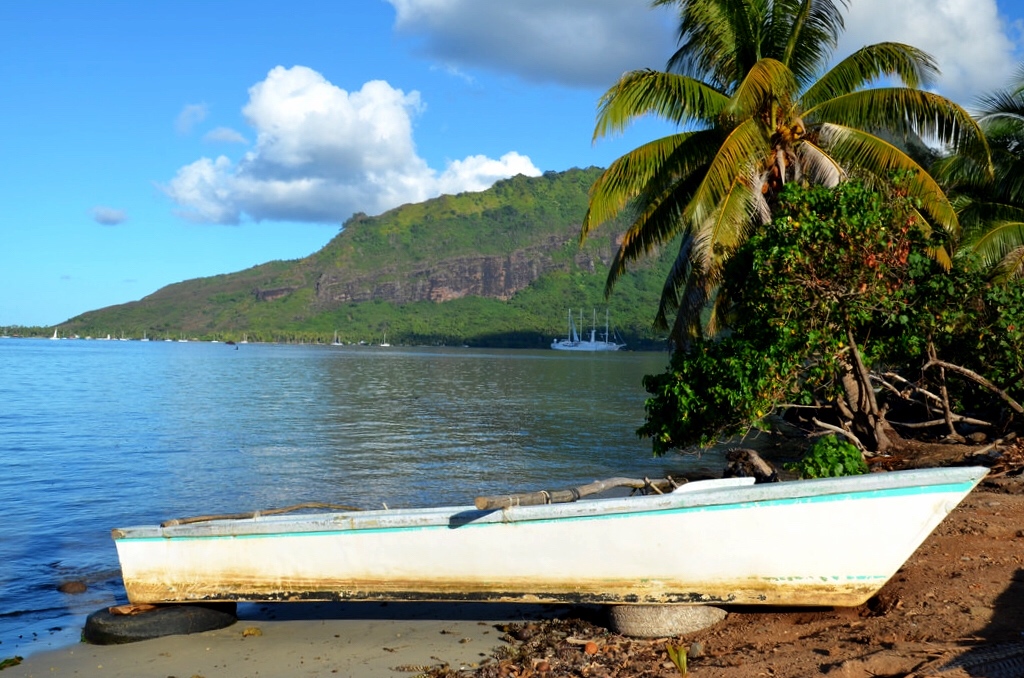 Visiting the South Pacific was an important trip for me on a very personal level. I’d wanted to visit this remote region of the world since I was a little kid, part of me never believing that it would actually happen. So when the moment finally did come, when I was able to visit the Society Islands for the first time, I wanted to do so mindfully. Sure, I wanted to experience the luxury and relaxation provided by resorts and high-end cruises, but I didn’t want to visit the islands blindly. I wanted to be curious, to keep my eyes open and to try to discover as much of real-life around French Polynesia as I could. I realize that I only scratched the surface, I realize that in order to truly understand it I would have to live there, but it was a good first start. It was also a good lesson to always be a little skeptical when we travel, to always be curious and to always consider the fact that the people who call the destinations we love to visit home aren’t props, they’re real people with real lives and it’s up to all of us as travelers to learn their stories as best we can.