By this time I’d like to think that I’m pretty well familiar not only with Viking River Cruises, but with river cruising in general. I’ve been on several trips in Europe as well as in Egypt floating down the Nile. I like river cruising and while it’s not how I travel every time I leave home, I do think it’s a great option that travelers should enjoy from time to time. I think that’s why I’m surprised that I was a little surprised by my most recent trip with Viking as I traveled from Paris to Prague. The surprises weren’t bad, far from it, instead they helped further evolve the way in which I think about river cruising and Viking as a company. There’s a reason why they’re the leader in European river cruising, a fact that was made even more obvious to me a few weeks ago. Instead of just do a boring review of the ship, food, blah, blah and blah, I thought I’d highlight those moments when I was most surprised and how they reflect the trip in its entirety.

No, You Can’t Sail From Paris to Prague

In my defense, I actually did know this before leaving home. While the Cities of Light itinerary is technically from Paris to Prague, the actual river cruising aspect of the trip is in Germany. Let me explain. Included in the trip are two-nights in Paris before the start of the cruise and two-nights after the cruise in Prague. But those four nights are treated just as if you’re on the ship, meaning that Viking does everything in its power to create a memorable and fun experience. I’ll go into more detail on the land-based part of the trip in another bullet point, but in this paragraph I want to talk about how Viking manages the transition from city to river back to city. For many of us, spending time on a coach with 30-40 other people doesn’t sound like fun. I mean, there’s a reason why we didn’t book a bus trip through Europe, right? Thankfully, Viking knows that too and they are most certainly not a bus tour company. The itinerary, I believe, was created in order to introduce guests to two of Europe’s best cities, while also incorporating an amazing trip sailing along Germany’s rivers. They also seem to understand that their guests don’t want to spend a lot of time on coaches, which is why they manage the time as well as they do. Getting up early, the trip time from Paris to our ship in Trier, Germany was in total four hours. Viking made this infinitely more manageable, and interesting, though by including an afternoon stop in Luxembourg. There we had plenty of free time to explore on our own as well as an organized walking tour through Luxembourg City and then onwards to the nearby American Cemetery and Memorial. It was a great experience and I doubt I would have otherwise visited this small but incredibly interesting country, now one of my favorites. They did the same as we transitioned from our final river stop in Bamberg to Prague. Without stopping, this would ordinarily take around four hours, depending on traffic which, again, is not ideal for active travelers. Luckily, Nuremberg is along the way and again Viking included a mid-morning stopover exploring the city, with a short tour and plenty of free time on our own. Viking didn’t have to include any stops between the two start and end points. At the end of the day, while not ideal, four hours in a bus won’t kill anyone. But by including both Luxembourg City and Nuremberg, Viking not only made the drives more manageable, but they added a lot of value to the overall trip as well.

While I have sailed Viking before, this most recent trip was my first time doing so in a Veranda Suite and the experience was extraordinary. Don’t get me wrong, I’ve never been unhappy with the size, style or layout of any Viking cabin I’ve briefly called home, but it was especially nice to have the extra room that a suite provides. Walking into the cabin for the first time, I entered what would be my prime relaxation and workspace for the week – the living room. A spacious area it had everything I needed including sofa, TV, desk and a full veranda. Adjacent is the bedroom, which features another TV, hotel-style bed, a French balcony, closet space and drawers and of course the bathroom. There are dividers separating everything so you never have to worry about waking your significant other and naturally the suites enjoy the same amenities as other cabins namely premium amenities, daily water and fruit and plenty of storage space. Some extras that the suite provides though include a welcome bottle of champagne and some complimentary laundry services. I wouldn’t have thought that a slight improvement in living space would make a huge difference in my Viking experience, but it did. The ability to have a separate space to relax and to sleep is priceless and I know that I’m now a convert, forever choosing a Veranda Suite or better whenever I find myself on another Viking ship in the future. 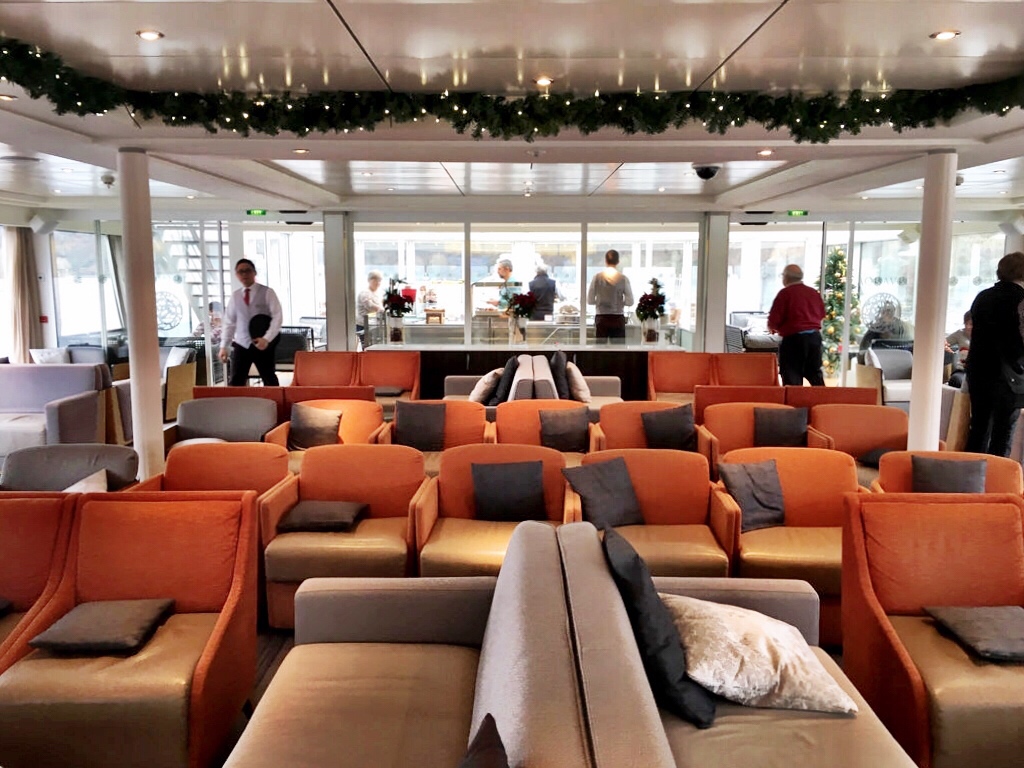 Over the course of many cruises, both river and ocean, with a variety of different companies all over the world I can say without hesitation that the crewmembers onboard always make the difference. How they enhance, or not, a trip often dictates our overall enjoyment, whether we even realize it at the time or not. This is magnified on small ships and especially on river ships where crewmembers oftentimes have to wear many hats. While I’m sure my experience would have been great without the cruise director onboard the Viking Odin, the service and care exuded by Bojan during our week and a half with him transformed the journey into something special. A big reason for that is because he was literally with us from the moment we arrived into Paris to when we left Prague, which surprised me. Much more than a cruise director, he was the overseer of our trip, making sure every detail was taken care of for each and every guest. Having that continuity from the hotel in Paris through to onboard the ship until the hotel in Prague is key and a detail I’m surprised even Viking managed. It reassures guests to have the same face no matter where there are, instead of being passed off to the next person in a sort of travel relay race. Of course, it also helped that he was imminently competent and seemed to genuinely care about everyone’s experiences, a rare thing to find but vital in that role.

When I first selected the Cities of Light itinerary I wasn’t completely sold on it. It wasn’t because I didn’t think the cities would be interesting, I knew they would be which was the source of my apprehension. I had already visited a few of them on previous river cruises and I wasn’t sure if revisiting would be rewarding. Naturally, I was wrong. As with any travel experience, revisiting cities gives us the opportunity to experience these destinations in new ways, learning more about them and adding to our own overall travel experience. Viking made it easy since about half of the cruisers onboard had sailed with Viking in the past (and therefore had also visited the same cities) they created new opportunities for us to explore on our own, without taking the complimentary walking tours we had already enjoyed. That worked well for me in both Rothenburg ob der Tauber and in Heidelberg, where I had plenty of free time to explore and discover new sides to these always interesting places. Of course in cities like Paris and Prague, I’m always happy to return and having two nights in each city was perfect. Speaking of which…

This was my first time on a Viking river cruise itinerary that included hotel stays and now I can’t imagine experiencing their trips in any other way. Let’s forget for a moment that both Paris and Prague are amazing cities that need days to explore, but having a home base before and after the cruise portion of the trip rounded out things very nicely. It was a wonderful luxury to have a couple of days to get used to the new time zone and acclimated to days of sightseeing and exploration. The same on the return; it was priceless to be able to enjoy time afterwards in Prague to organize bags and mentally adjust to finishing a fun trip. Additionally, Viking treats these hotel stays as important aspects of the trip and the same complimentary daily tours and concierge services are available even though you’re on land. It adds a dimension to the trip that I wasn’t expecting, but loved dearly. While I may not always choose a river cruise itinerary that includes these pre and post stays, I certainly appreciate how much they add to the overall trip experience.

After having sailed with Viking several times and been a river cruiser multiple times it was nice to once again be surprised. The last thing we want from any travel experience is something boring and prosaic, which has never been the case with Viking. Once again, they provided a travel experience that wasn’t just nice, but one that I know I’ll remember for years to come.