There’s always a different way to explore any city. Sure, the guidebooks are helpful and almost every destination has a core set of sights and landmarks that everyone should, and usually does, visit. But it’s also important to add in experiences that are a little different, that bring to life the history and culture of a city in ways that aren’t the norm, ways that aren’t done with thousands of your closest friends. That’s a big reason why I use the walking tour company Context Travel whenever I can and it’s also how I found myself on a food tour in Paris that wasn’t only interesting, but delicious. I first used Context in Paris 5 years ago and so it was fitting to return to them when I once again found myself in the City of Lights, eager to always see and learn new things about this, my favorite city in the world. As the owner of a seemingly insatiable sweet tooth, when I saw a Paris Chocolate Tour offered, there was little doubt in my mind about how I’d spend some of my time in Paris.

I was in France as part of a Viking River Cruise, their Cities of Light route from Paris to Prague. It was different from other Viking Cruises I’d enjoyed in that it included two nights before and after the cruising portion, both in Paris and Prague. It was the perfect way to ease into a new time zone and to enjoy some private time in cities I knew I already loved. I love the freedom that Viking offers, allowing me to be the independent traveler I am and to enjoy experiences like the desserts tour that started in front of the ancient church of Saint-Germain-des-Prés one beautiful winter afternoon. The last time I was in Paris the weather couldn’t have been more different; grey, rainy and cold. That’s normal for December really, which is why the moderate temperatures and bright sunny weather wasn’t only a nice bonus, but it helped transform my two days in Paris into something truly special. More than just a nice walk around one of Paris’ best neighborhoods though, the Context Chocolates and Pastries tour brought to life more aspects of the city’s history and culture that I knew nothing about, but about which I was eager to learn. 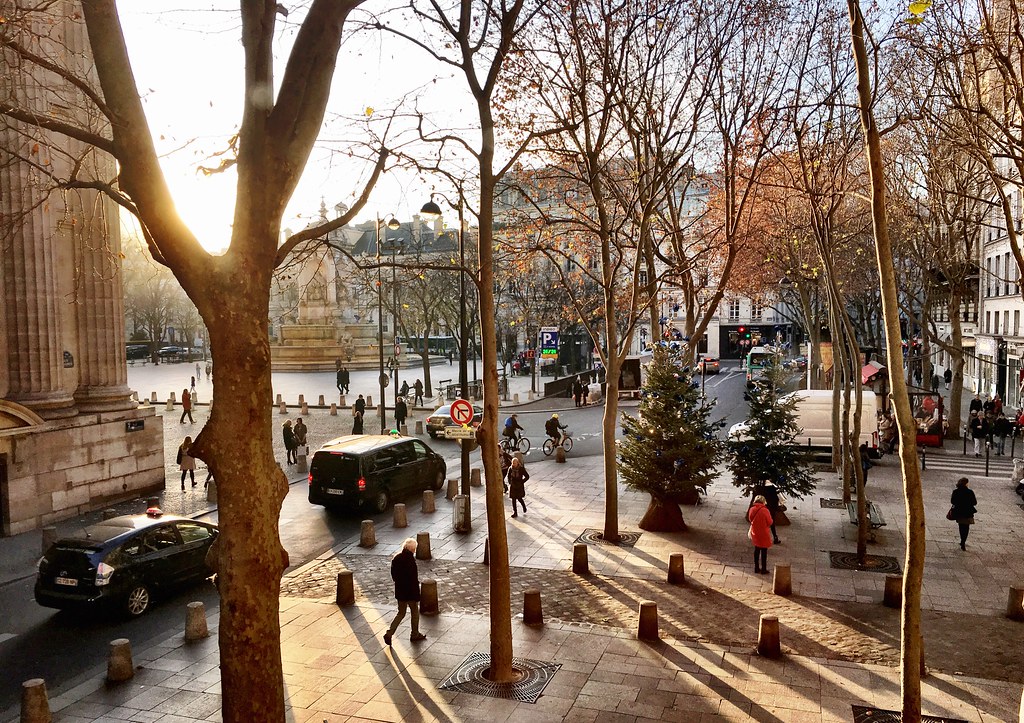 Located on the Left Bank of the Seine, Saint-Germain-des-Prés is one of Paris’ toniest neighborhoods; one of those places where you wish you lived as soon as you see it. I walked there from Notre Dame, an easy stroll through the Latin Quarter, past iconic establishments like Shakespeare and Company and the Deux Magots bistro. The sun created a golden hue that ran across the streets ahead of me, basking everything in a warm and embracing light. Since Christmas was a couple of weeks away, people were busy doing some shopping, buying food to take to parties and office gatherings and probably just enjoying the abnormally nice weather. I’d never really spent that much time in the neighborhood, instead opting for different parts of Paris to explore whenever I’m in town. I soon realized my error and over the course of a few hours walking around with my Context guide, I fell deeply and madly in love with Saint-Germain-des-Prés. 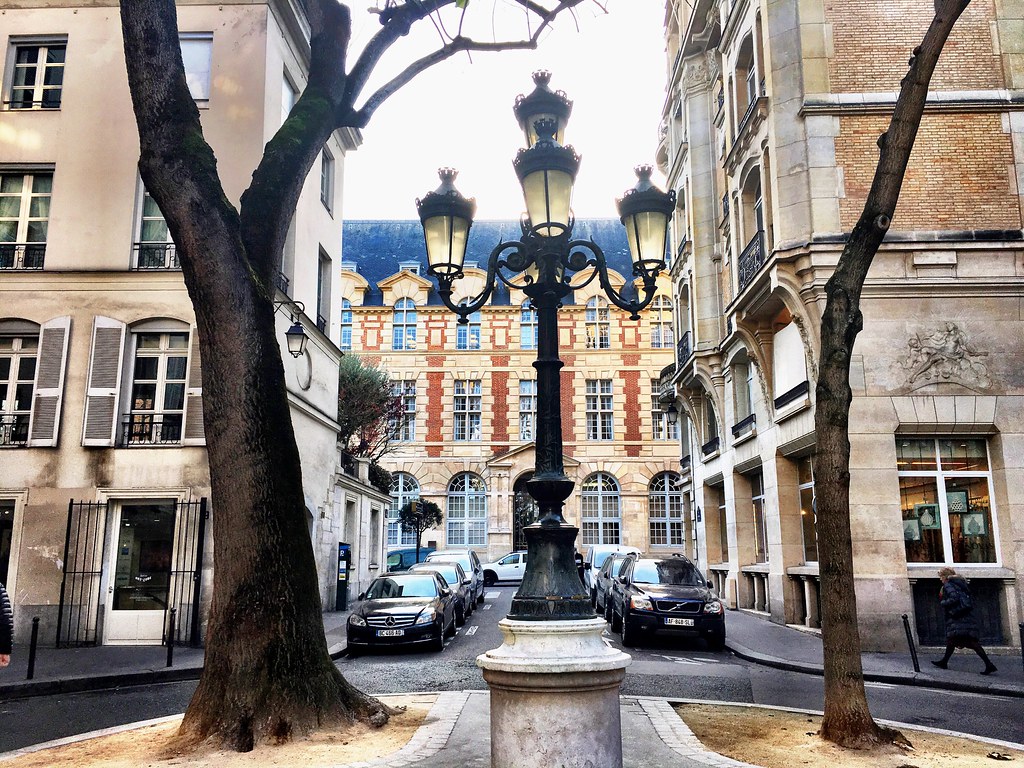 The focal point of the area is the ancient church, which at one time served as the final resting places for the French kings. Later the neighborhood waxed and waned in terms of importance, hosting an annual fair that was world famous and also creating the first café in Paris, an achievement I know I’m thankful for. It wasn’t until the 19th century and the architectural changes by Haussmann though when this ancient medieval neighborhood took on the dramatic look and feel that we still enjoy today. I love that about Haussmann’s changes to the city, how grand and important everything feels, from the wide boulevards to the stonework that seems to capture and enhance the light. This is the Paris I know and love and Saint-Germain-des-Prés is one of the best places I’ve found to enjoy it. Fast forward to the 20th century and this same area was the intellectual hub of the world, attracting everyone from Oscar Wilde to Hemingway to the Existentialists, Sartre and Camus. What I wouldn’t give to have been sitting at those bars with these literary icons, to listen to their banter and to enjoy the intellectual wheeling and dealing of the era. It’s just another reason to fall in love with Saint-Germain-des-Prés, which I did very quickly. It’s also a foodie center and apparently, it’s also home to some of the most iconic dessert specialists in the world. 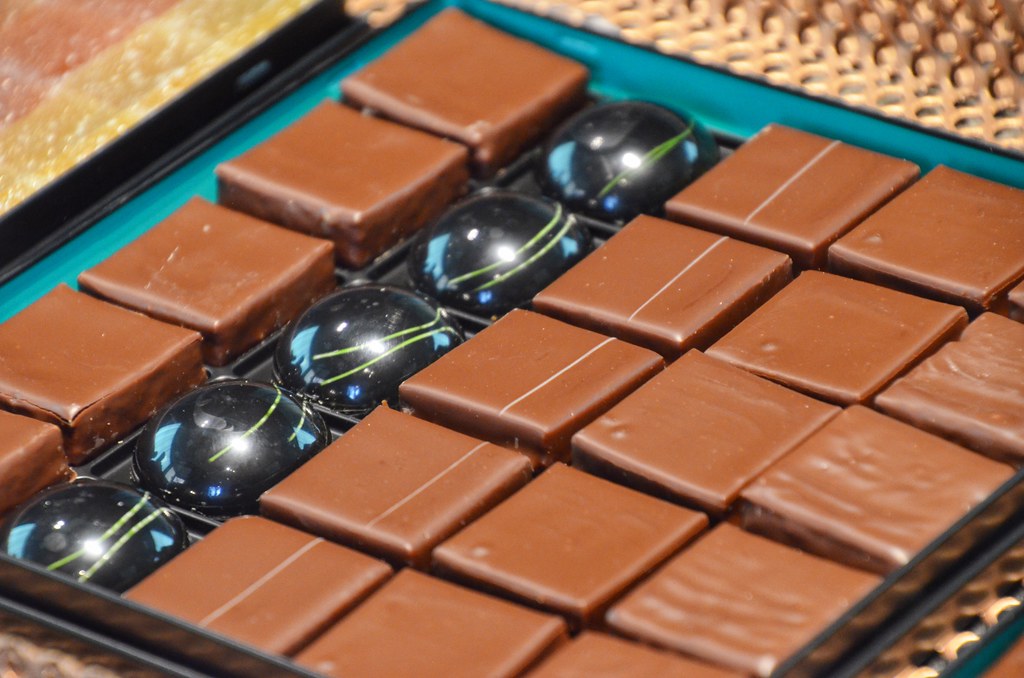 Another aspect of the Context experience that I always love is the extremely high quality of their guides. These folks are true experts in their fields, from professors and writers to sommeliers and chefs. No matter what kind of tour you’re on with them, you can rest assured they’ve found a true expert to lead the group. There were 6 of us there in front of the church, all eager to not only learn more about the history and culture of the city, but of course to sample some of its most famous desserts. I just want to offer a quick caveat, as with all food tours that I write about I won’t list every stop and everything we ate. I don’t want to take anything away from the experience, but I do want to share just enough to show how much fun this walking tour experience really is. 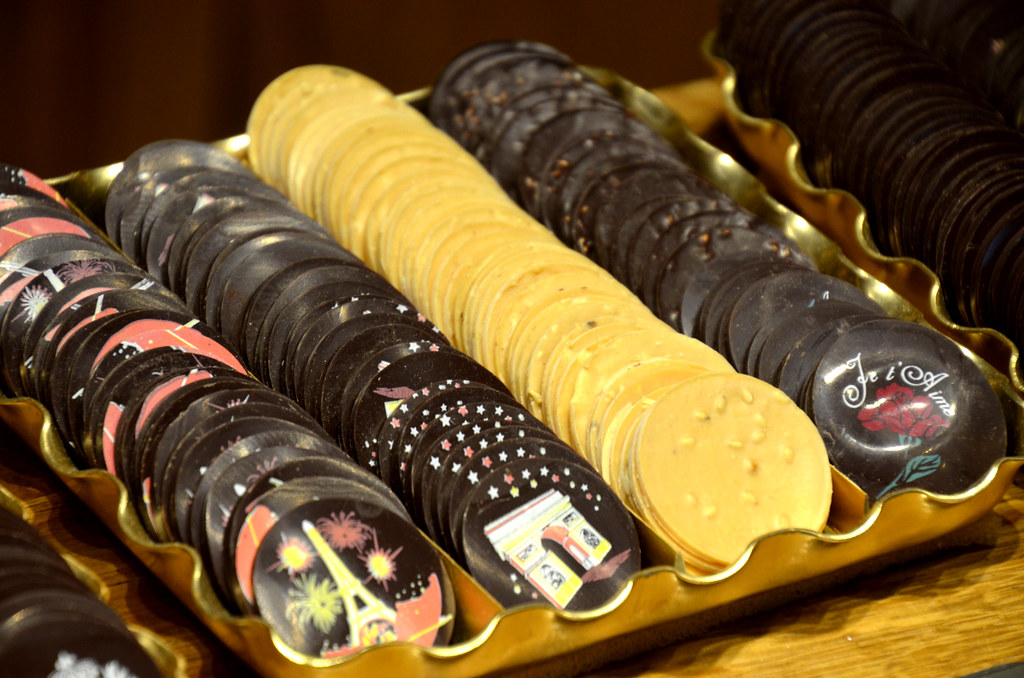 I don’t think it should come to any surprise that like most aspects of the culinary world, the French too have had a heavy hand in creating some of the desserts and pastries that are treasured around the world. Chocolate has a strange history though if you think about it, first imported into Europe from the New World, it was then treated as a medicine of sorts for years before people found ways to make it more enjoyable. That’s how the chocolatier Debauve & Gallais started back in 1800, an official supplier of pharmacological items to the Crown, the shop on Rue des Saints-Pères is much as it was when it first opened its doors back in the early 1800s. Although it may have started as a pharmacy, it was the special ingredient chocolate that changed this shop, and hundreds others like it, permanently. Today it is Paris’ oldest confectioner, serving a variety of sweet and delicious bites from truffles to squares and even one item for which they are particularly famous, the Pistoles De Marie Antoinette. Introduced by Debauve himself, these chocolate coins were originally developed foe Marie Antoinette in order to ease her distaste for taking medicine. She naturally loved them and so Debauve created an entire collection of them, which are still sold by the boxful today. 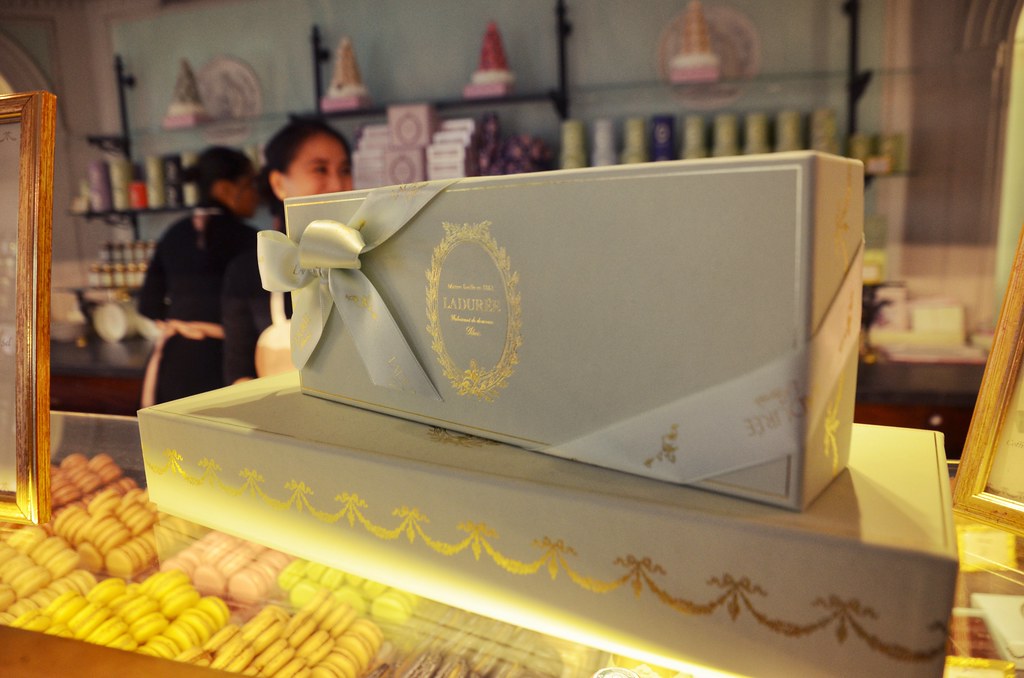 Another famous shop included on this leisurely stroll through Paris is one that I know almost everyone will recognize – Ladurée. Macarons have catapulted themselves into one of the world’s most trendy (and tastiest) desserts, but it all started with this innocent pastel-colored tea house. One aspect of the shops and cafes that we visited on the Context tour is that many of them brought about not just culinary innovation, but social innovation as well. At the time when Ladurée first opened, it was unseemly for women to go out to restaurants and other establishments without a male chaperone; there was a need and Ladurée found a way to serve a new community. A teahouse, women of the day could meet here without evoking scandalous comments and a new mid-day culinary tradition was born. The teahouse still exists and I heartily recommend stopping off for an afternoon pick me up, but of course today Ladurée is best known for one thing – the macaron. In the 1930s, the great minds at Ladurée had the idea to take two macaron cookies and stick them together with a ganache. Who knew that one of the world’s most beloved desserts would be the result? Not only did we enjoy a tasting at the shop, but I even bought a few to try later on in the day; my favorite kind of souvenir. 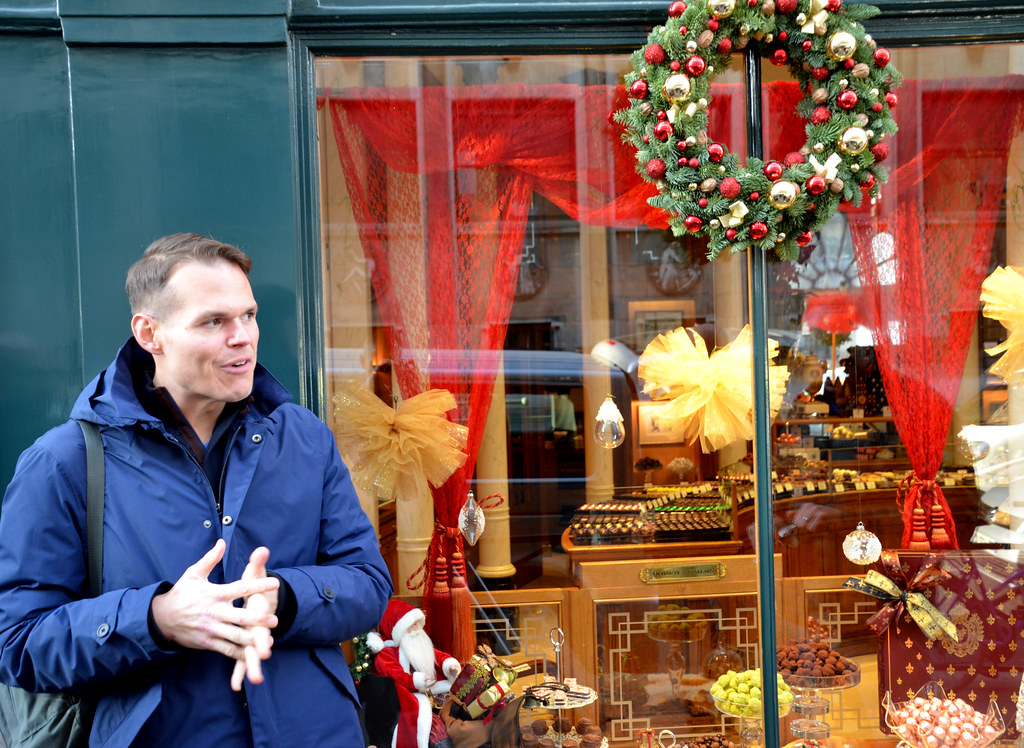 From macarons to pastries to modern day chocolate work that is once again changing not only the Paris food scene, but the way we all think about confections – the tour walks through time and history, sharing the evolution of what is my favorite morsel – anything sweet. It was also just a lot of fun, making new friends with the guide and other tour participants, strolling around Paris on a beautiful day, everything clicked. Everything seemed perfect because it was. Context tours are different from others I’ve booked for a few important reasons. They use the subject matter experts I mentioned before, they keep their groups small and intimate but, more importantly, they cover topics that aren’t only interesting, but hard to find in a walking tour. They are tours for the intellectually curious and you won’t find anything run of the mill about them. They eschew some of the more common tourist traps and instead take guests deeper into the heart, or stomach of a city, helping us experience it in ways we would never otherwise have been able to do. I love that and I love the fact that even though I’ve spent a lot of time in the city over the decades, Context’s Paris tours once again brought to life new parts of the city for me and, inevitably, made me fall even more deeper in love with what surely must be the best city in the world.