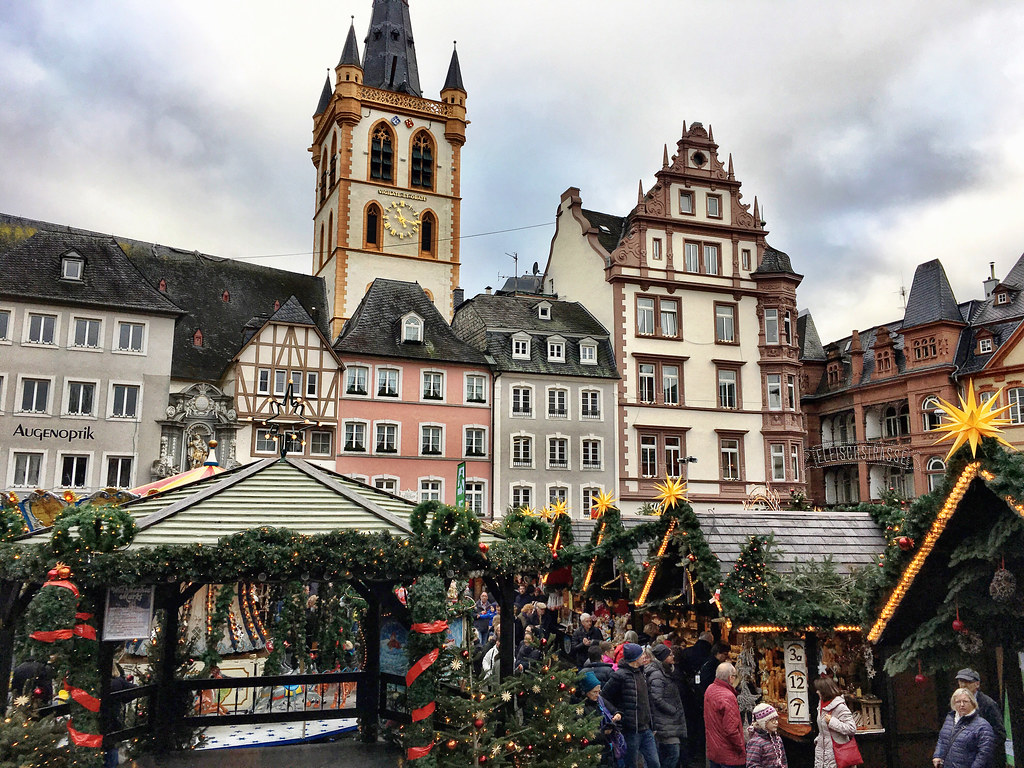 One of the best aspects about traveling around Europe during the Christmas holiday season is all of the amazing food finds at the Christmas markets. The markets are for locals, so comfort foods are popular, along with regional delicacies and even some more exotic snacks. I ate a lot during my Viking River cruise from Paris to Prague, but these bites in particular were some of my most favorite during a week of exploration and plenty of snacking.

Raclette
No, my trip sadly did not take me to Switzerland, but in France the Alpine regions are well represented at the Christmas markets, particularly with this warm and hearty dish. Oddly enough, I had never tried it before, which is strange since it involves everything I love. A mild, soft cheese is kept at melting temperatures and then the gooey cheese is scraped and placed on top of sandwiches to create one of the best handheld meals I’ve ever enjoyed. Finally deciding on a country ham sandwich, I watched as the cheese was gently scrapped off the wheel and the oozing goodness added to my sandwich. If I could eat this every day, I would be perfectly happy and in the future I know I’ll never be able to walk past a stall selling these sandwiches without placing an order. 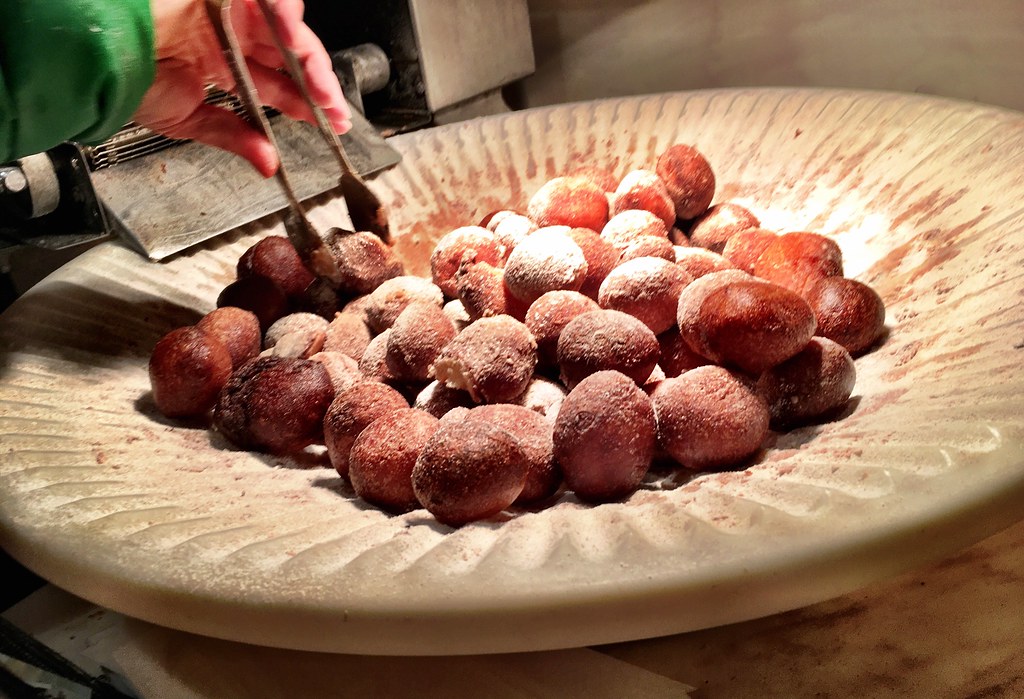 Quarkbällchen
Most cultures have a favorite way to serve fried dough, from donuts to beignets and in Germany sometimes even these small fried dough balls. I found these at a variety of markets and are incredibly simple, small dough balls that are fried and then dusted with powdered sugar. They taste a little like funnel cakes, but aren’t quite as sweet and served 6 to a bag, are the perfect hot snack on a cold December day.

Flammkuchen
The Moselle region of Germany enjoys many culinary specialties, including one I discovered in Trier – flammkuchen. Dough is thinly rolled out into a rectangle and then is covered with creme fraiche, thinly sliced onions and bits of bacon or lardons. This pizza-like concoction is then cooked in a wood-fired oven, creating a comforting and filling snack in the process. As I later learned, this is one of the region’s most famous dishes and after enjoying one for lunch, I quickly understood why.

Reibekuchen
I first tried these treats last year while on another Christmas market cruise, but this year they seemed even more popular wherever I went. Comfort food at its finest, Reibekuchen are simple meals  – deep fried potato fritters served with a variety of toppings, from applesauce to cheese. They’re usually served in bunches of three and are more than enough for a complete meal. They are also intensely popular, at least based on the markets I visited and for many folks seem to be one of the food staples of the Christmas market experience. 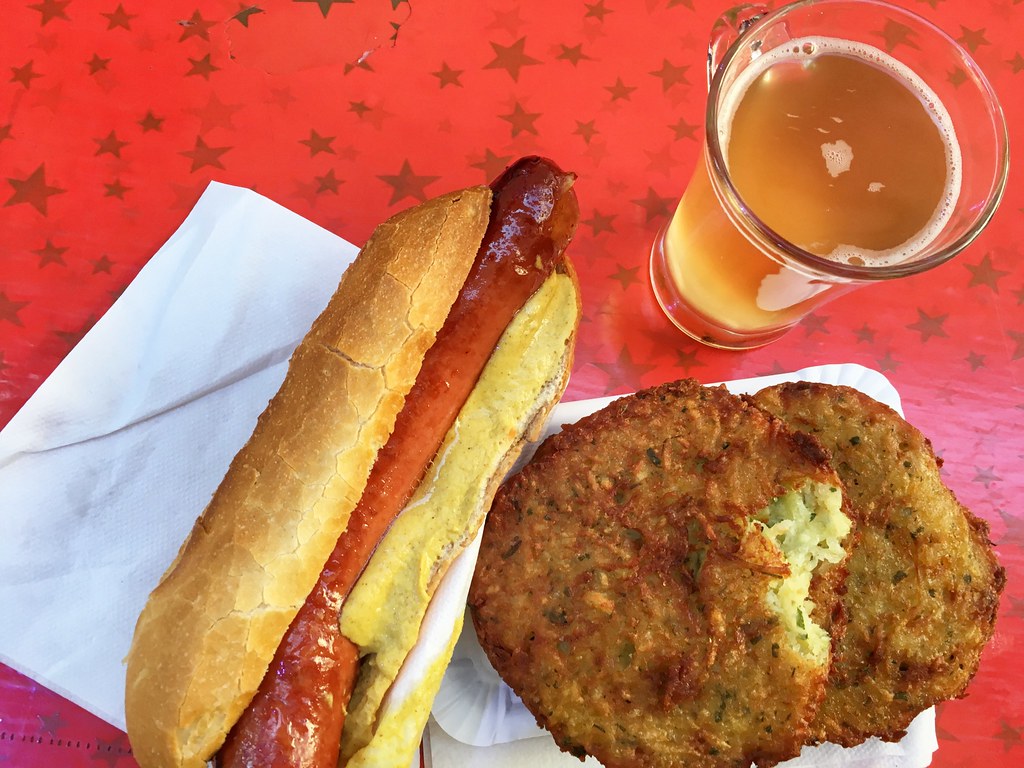 Sausages and German Mustard
Almost every city, town and village in Germany, Austria and even Luxembourg will swear that they have the best sausages in the country and arguably the world. Sampling them all and discovering who is closest to the truth is a lot of fun and makes for an ideal lunch on the go. While bratwursts and weisswursts tend to taste the same just about everywhere, it’s the regional variations that I love most. Just as important as the sausages is what you put on them, namely mustard. I love mustard and routinely buy locally made mustards I like when I travel around Europe. In the small town of Cochem I was fortunate enough to find a museum devoted to my favorite condiment, along with a tasting room of some amazing locally-produced mustards. And yes, I did pack some jars away into my suitcase. 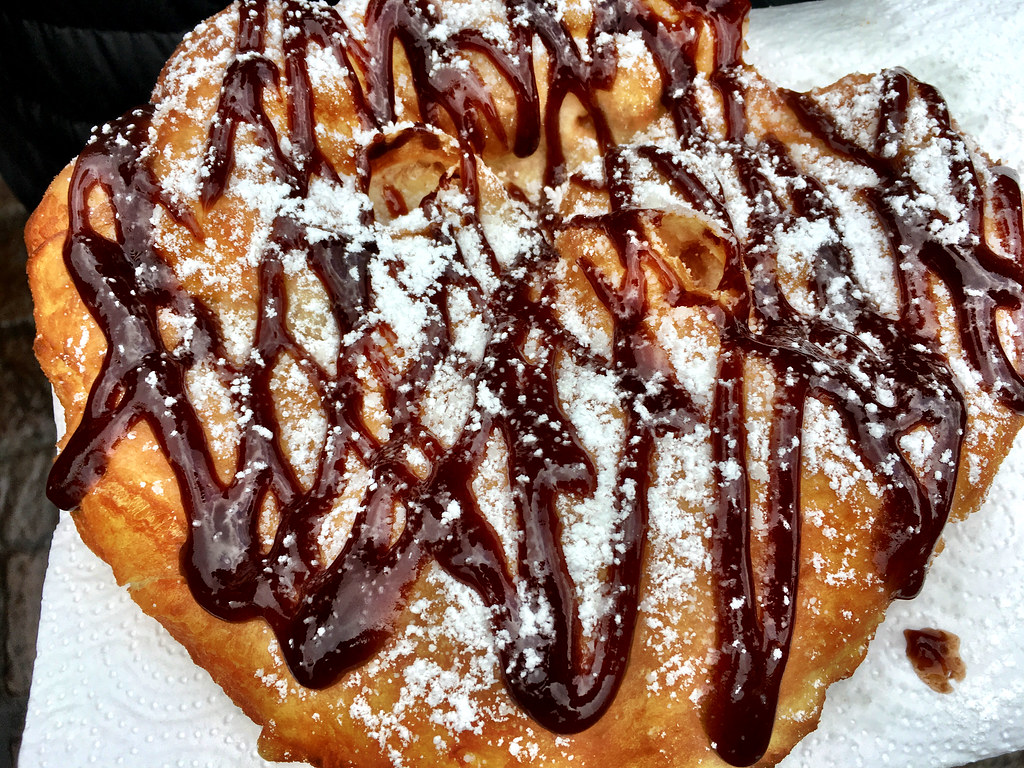 Langos
This year was the first time I ran into this Hungarian foodie favorite, first in Trier, Germany and again in Prague – but the two versions could not have been more different. In Trier, it was treated as a sweet treat, topped with any number of items, but I went with a traditional version. Langos is a deep fried flatbread that puffs when fried. It’s a blank canvas really for any ingredient. In Trier, I enjoyed it with a sweet plum sauce and powdered sugar, a delicious treat on what was a cold morning. In Prague though, the langos was a savory snack. What looked like a small pizza is made with the freshly fried dough puff, garlic oil, ketchup and shredded mozzarella. Trust me, while it sounds a little strange, it is delicious and the perfect snack while exploring the markets.

Rothenburg is a traditional German town that thrives on providing visitors with half-timbered buildings and experiences that in many ways encapsulate a typical German experience. But the city also has a special snack that is unique to its streets and nearby villages, something that almost didn’t make it out of the kitchens of local homes. Rothenburger Schneeballen, or Rothenburg Snowballs, are small pastries that are common in this part of Germany, but especially so in Rothenburg. They’re simple really, just traditional pastry dough that’s fried and then drenched with powdered sugar. They were originally wedding desserts, made days or even weeks in advance giving the cooks enough time to concentrate on other elements of the celebration. Then a local baker in Rothenburg decided to start selling them at his shop in town and the rest is history. They immediately became popular with locals and when tourism picked up in later years, they became the must-have souvenir from town. Since they’re hard and can last for weeks – even months – they’re the perfect gift. Nowadays you can get the traditional version as well as ones covered in chocolate, hazelnuts or cinnamon-sugar. Regardless of which one you go for, they’re all excellent and when paired with a strong coffee are the perfect afternoon snack.

Spätzle
One of my favorite side dishes, I sadly only found it once while on my 2016 Christmas market experience, in Heidelberg at one of the many stalls found along the main street. Although there are variations, at its core spätzle is simply a dish of soft egg noodles. What made the bowl of spätzle I enjoyed this year so good though was that they were then grilled and fresh Emmenthaler cheese and onions were added when I ordered it, creating a German variation of mac and cheese that is better than any box of Kraft you’ve ever tried before.

One of the greatest finds on my Christmas exploration of Europe was discovering authentic German Lebkuchen. Most often compared to what we Americans call gingerbread; I quickly discovered that’s not an entirely accurate description of this tasty dessert. Lebkuchen differs from baker to baker and can include a variety of different ingredients including honey, spices such as aniseed, coriander, cloves, ginger, cardamom and allspice, nuts including almonds, hazelnuts and walnuts, or candied fruit. The most famous place to find this treat is in Nuremberg, where Lebkuchen has been produced since at least the 1300s. There are many great shops throughout the city and it really is a matter of preference which one you will enjoy most. During Christmas, head over to the famous Christmas Market, one of the largest in the world, to sample a few different kinds and see which ones you like best. Regardless, do not leave Nuremberg without taking home a big box of these tasty cookies – you really won’t find anything else quite like them anywhere in the world.

Trdelník
I actually first discovered these amazing desserts while in Budapest a couple of years ago, but in Prague they are the star of the culinary Christmas market scene. Made from sweet yeast dough, the cake starts off as a strip that is spun and then wrapped around a cone–shaped baking spit and rolled in granulated sugar. It is baked on a charcoal grill while doused with melted butter, until its surface becomes golden-brown. During the baking process the sugar caramelizes and forms a shiny, crispy crust on the cake. Made to order, the cakes are served up hot and the steam rising up looks just like a chimney, hence it’s nickname the chimney cake. In Prague they are served plain or with any number of add-ons, the best of which is Nutella. This was probably my favorite dessert of the trip, which is saying something.

Drinks
A major part of any great Christmas market are the drinks, almost always served piping hot. While the alcohol-infused cups of gluhwein are the most common, the drinks actually vary from region to region including many non-alcoholic versions like hot chocolate, apple cider and kinderpunsch, a kid’s version of the popular adult beverage. 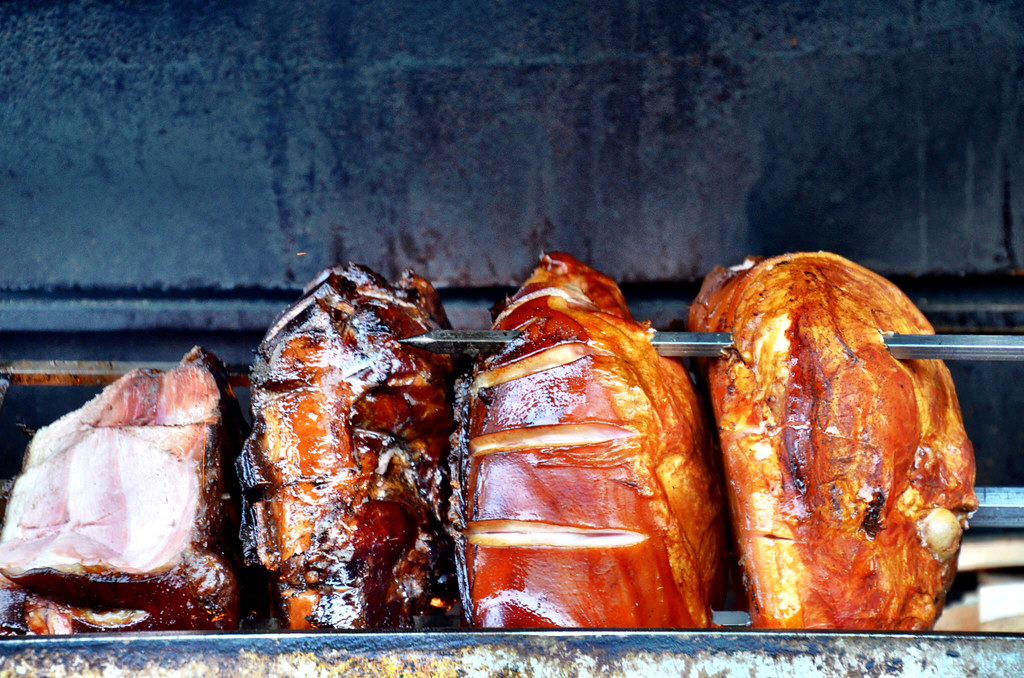 Prague ham
Just as I connect with German food, Czech food also is a personal favorite, although it’d honestly been a long time since I last enjoyed it. While there are many classics that were inspired by the country’s inclusion in the former Austro-Hungarian empire, there are of course many traditional dishes that are purely Czech, and its famous ham is one of the them. Originally a Bohemian specialty, Prague ham is a type of brined and lightly smoked ham that is as savory and succulent as it sounds. One of my favorite meals, when prepared as expertly as they do in Prague, it’s hard not to love this hearty dish.

What are some of your favorite holiday snacks?