It’s hard not to love Amsterdam any time of year, but around Christmas the city seems a little extra special. It may not at first occur to you to add Amsterdam to your winter travel plans, the weather can be grey, cold and rainy. I think that December is a great time though not just to visit Amsterdam, but any city in Europe to enjoy the festive season and a more local experience when you travel. I spent a day or so exploring Amsterdam before joining a Viking river cruise sailing the Rhine from Amsterdam to Basel. It was a great chance to explore the city on my own and with a little help, I discovered some fun ways to enjoy Christmas in Amsterdam.

Since my first experience with the tour company Eating Europe was such a success in London, when I found myself in another city where they host tours I knew immediately that I had to join. I wasn’t disappointed either and that morning and early afternoon I spent wandering around the canals of Amsterdam made me finally learn to appreciate the city, food coming to the rescue once again. From classic Dutch apple pie and poffertjes to more recent additions to the Dutch food scene from far-flung colonies, the tour was a true immersion into what Amsterdam as a city values in its food. Of everything I tried that morning, without a doubt my favorite bite came not at a café or restaurant, but at a butcher’s. Butcher Louman in the Jordaan neighborhood has been the go-to source for great meats since 1890, but they’re especially well known for their sausages and cured meats. My favorites were the ossenworst (raw, smoked beef sausage) and the grillworst (grilled sausages), which are both amongst the best in the city. The tour is also a fun way to see other parts of the city you might miss on your own, while enjoying local insights from the guide. 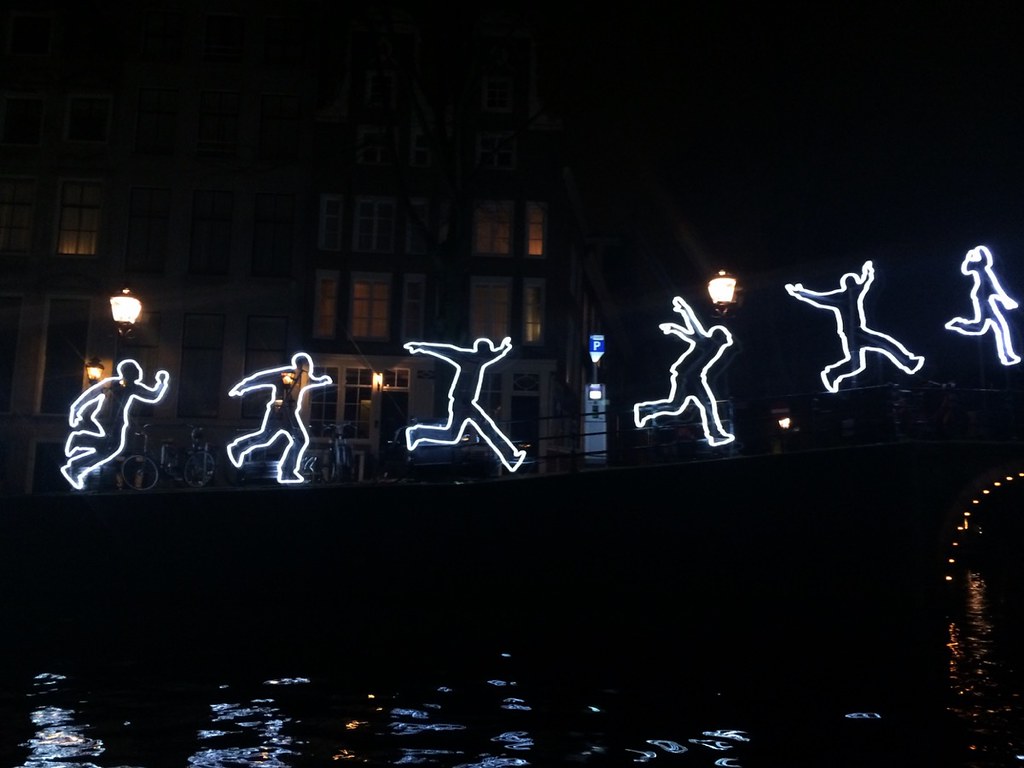 Amsterdam enjoys an embarrassment of beauty any time of year, but around the holidays something special happens that makes a canal cruise or walk around town even more special. The Amsterdam Light Festival is an annual event that showcases unique light displays from a global array of artists and architects. There are two main routes, a land-based and water route and from my own experience the water route is not to be missed. I had never heard of the festival until I found myself in the city during the height of the event, so I bought tickets for an evening cruise to see what it was all about. The festival truly is something extraordinary and the perfect way not only to see more of Amsterdam from the water, but to marvel at the artistic creations strewn around the center of town. It adds a lot to the holiday experience and if you’re in Amsterdam in December, this should be at the top of your to-do list.

As a picky eater, I very rarely take advice from friends about where to eat when I travel. It never works out and I usually get lost trying to find the restaurant. In Amsterdam though I received a recommendation that was so intriguing, I had to try it and I’m so glad that I did. Restaurant RED, overlooking the beautiful Keizersgracht is a remarkable place not for what is on its menu, but for what’s not. Keeping things simple, there are only three options for dinner: steak, lobster or both. There are few things that I enjoy more than an excellent steak, and so I made reservations weeks in advance, drooling in anticipation. The small, homey but refined interior set the mood for what was one of the best meals I’ve had in a long time. For those with an interest, a variety of caviars are available as an appetizer, which I skipped in anticipation of the well-executed tournedos of tenderloin. Well presented and exceptionally well seasoned, it really was one of the best steaks that I’ve had in a long time. When capped off with a gooey warm chocolate cake, it was the perfect foodie way to end my time in Amsterdam.

Ultimately, the Netherlands is not a large country, which means exploring the nation’s other major cities is fun, especially around the holidays. Rotterdam couldn’t be more different from, well, everything and a visit to this modern and innovative city is a lot of fun if you have the time. Rotterdam was almost entirely destroyed during WWII, which gave city leaders an opportunity to reshape their community, which they fully embraced. Following the war, many other European cities decided to rebuild in the old style, but not Rotterdam. No, instead Rotterdam has and continues to embrace avant-garde architecture that is simultaneously bizarre at times, but also undeniably beautiful. One of the best places to get an idea of this radical architecture is by standing in front of Rotterdam’s new Market Hall. Opened in 2014, this modern landmark is the largest market hall in the Netherlands and certainly one of the prettiest.

To see a more traditional version of holiday festivals, continue on the train to The Hague, one of the stalwarts of traditional Dutch culture. It wasn’t until I stepped off the train in The Hague that I realized what Rotterdam lacks. It’s missing that Old World appeal that draw people like me to Europe in the first place. As I learned, that’s because The Hague has cornered the market in history and Old World charm. This is due on large part to the fact that The Hague is the seat of government, so the city is full of politicians, bureaucrats and hangers-on. Thanks to a sizable university population, there’s also a vivaciousness that counteracts the political nature of the city creating something all together different, something lovely to experience.

These are just a few ways to enjoy Amsterdam around the holidays, when the city comes alive with energy and light. What would you add to the list?