Prior to joining my Viking Christmas Market Rhine River cruise, I spent a couple of days getting to know a new city for the first time – Rotterdam. I have to admit, I was primarily attracted to the city thanks to photos of its more avant-garde architecture I had seen on Instagram and in travel magazines. Almost immediately though I discovered that there’s a lot more to this decidedly modern city than just a few buildings, and my time there was a pleasant surprise I never would have expected. Here’s how I experienced the city in just a couple of days, a schedule that I think is one of the best ways for any first-time traveler to get to know Rotterdam a little better.

One of the first things I do in any new city is to get as high as possible and in Rotterdam that meant the top of the Euromast. Built in 1960, the Euromast is Rotterdam’s tallest building standing at an impressive 279 feet. On a nice day it’s also the best way to admire the city and to better understand not just the urban grid, but the importance of the ports as well. Shipping has always been the lifeblood of Rotterdam and that’s certainly true today – the Port of Rotterdam is the largest port in Europe. It’s also a flurry of activity that while difficult to understand from the top of the Euromast, was easy to appreciate sailing through the middle of it.

I love seeing destinations from varying points of view and if possible, I also try to experience them from the water whenever possible. On a boat we see aspects of cities impossible to appreciate otherwise; tiny details meant only for water-going wanderers. To accomplish this in Rotterdam I joined a Spido boat tour of the downtown and harbor areas. Thankfully Spido is a year-round tour, which means even in the grey and a little rainy month of December we were able to join our fellow tourists all looking to learn more about this remarkable city. The 75-minute cruise took us by iconic city landmarks as well as into the heart of the massive port complex itself. Seeing the massive warehouses and container ships in every corner brought home just how much stuff comes in and out of Rotterdam every day. Fruit from South America, goods from China – you name it, if you buy it in Europe chances are it came through Rotterdam. The design and architecture is a hodge podge of eras and styles, coming together to create a unique sort of urban splendor you just don’t see in many cities. Plus, for me at least, it’s always great being out on the water, enjoying the afternoon and getting lost in the surroundings. 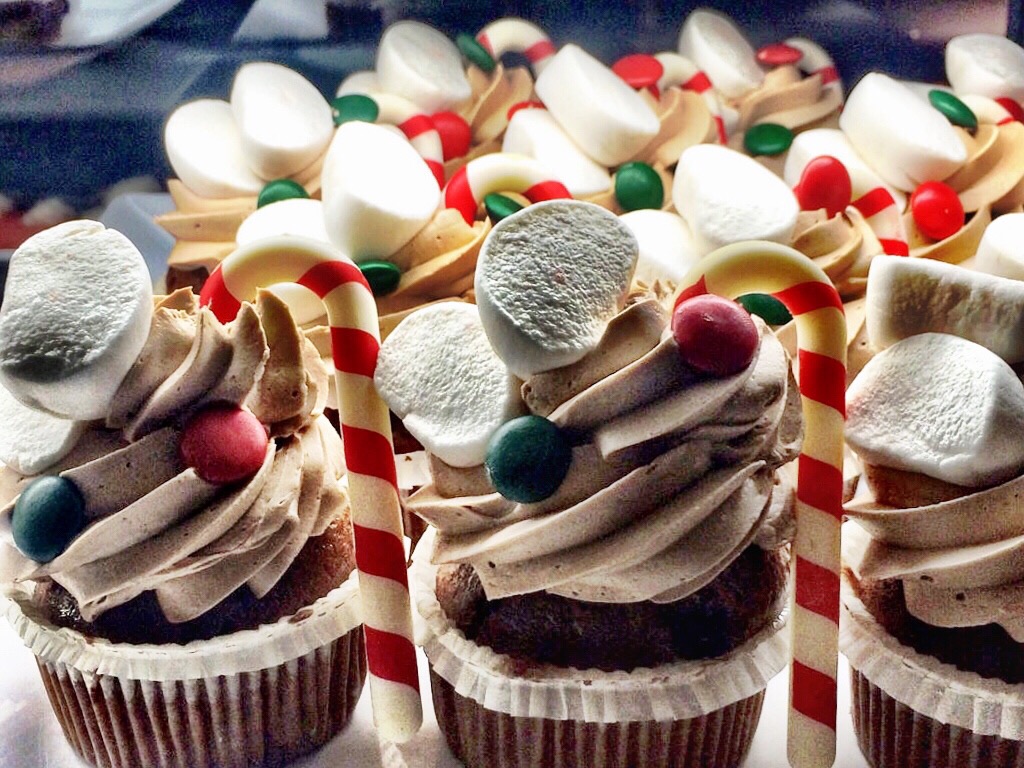 Just as the design and architecture of Rotterdam is a modern mix of styles, so is the food found throughout town. Like so many other cities around the world, the downtown core of Rotterdam is coming back to life and with it a new influx of places to eat and drink. If you want a different way to grab lunch, then there’s no better place than the now-famous Markthal. This massive facility is the largest market hall in the Netherlands and inside you’ll find small restaurants and cafes offering anything you could possibly want. We spent some time wandering, creating our own meal from small bites at different stands. It was a fun way to taste a variety of new foods and was an experience in itself. For an afternoon coffee, I settled on the quirky and slightly Bohemian Restaurant Bazar downtown. Adjacent to a companion hotel, the interior is eclectic to say the least, but it’s a fun place to enjoy a coffee or snack and to regroup after a day of sightseeing. I was in search of a great meal though, so I spent my evening enjoying dinner at one of the Grande Dames of Rotterdam – the Hotel New York. Housed in the gorgeous, fin de siècle style former headquarters of the Holland America Line, it’s a deceptively massive restaurant but one that knows exactly what it’s doing. The Hotel New York is a classic luxury hotel and the restaurant mirrors this commitment to service and quality through its traditional but delicious menu. Seafood along with a mix of culinary standards from another era makes this an experience instead of just a meal. They also have special featured desserts every day and from personal experience they’re just as good as they look.

I can’t ignore the fabulous modern architecture that brought me to Rotterdam in the first place, and one of the best places to enjoy it is at the Cube Houses. In May 1940, a German bombardment destroyed almost the entire city center of Rotterdam, leveling thousands of homes, business and important sites and forever changing the city. This isn’t an unusual or atypical story on the European continent, but what is somewhat unusual is how Rotterdam decided to rebuild. Unlike so many other cities around Europe, Rotterdam decided not just to recreate what had been lost, but to break with the past and design an entirely new city.

Built in 1984, the Cube Houses are a series of 39 small homes tilted 45 degrees. The architect, Piet Blom, meant to represent a tree and together, the houses make up an urban forest. Representative of the era, he wanted this to be a small, communal village, located in the heart of the urban center of Rotterdam. They’re meant to be a haven, a safe place where anything is possible. It says a lot about the concept that even today, 30 years after they were built, they’re still popular places to live and definitely to visit. In fact, so many people started to stop by the houses that a small “show cube,” a Cube House Museum really, was created so that curious visitors could see what these little homes are really like inside. Paying a few Euros, I entered the house and found something straight out of the 70s or 80s in terms of form and function. The first floor includes a living room and kitchen, bedrooms and a bathroom are on the 2nd floor and the top floor is left open to the residents and can be anything from a lounge area to a place for a small garden. But it’s all in a cube, one that’s at an angle no less. The walls and windows are angled at 54.7 degrees and the space is definitely compact – just about 100 square meters, or 1,000 square feet, of which 25% can’t even be used due to those strange angles. They’re a little weird and definitely quirky, but I fell in love with the look and feel of these homes, just one more architectural marvel in a city full of them.

One of Rotterdam’s newest additions to the skyline is also its most popular – the market hall. Opened in 2014, the Markthal is the latest incarnation of Rotterdam’s Reconstruction era, which embraced modern ideas of work-life balance, establishing zones for each and in the process creating an incredibly livable city. Inside the hall, 4,000 steel tiles line the quirky space, an artwork called the Horn of Plenty and which many say is the largest piece of art in the world. Walking around, the stands are a nice mix of fresh foods and prepared meals with a little bit of everything from sandwiches made with the freshest ingredients to French style bakeries and everything in between. My visit to the Markthal quickly became the highlight of a day with many great moments and is a place I hope to return to soon, to try some more of the delicious foods if not to simply admire this beautiful example of modern architecture and design. 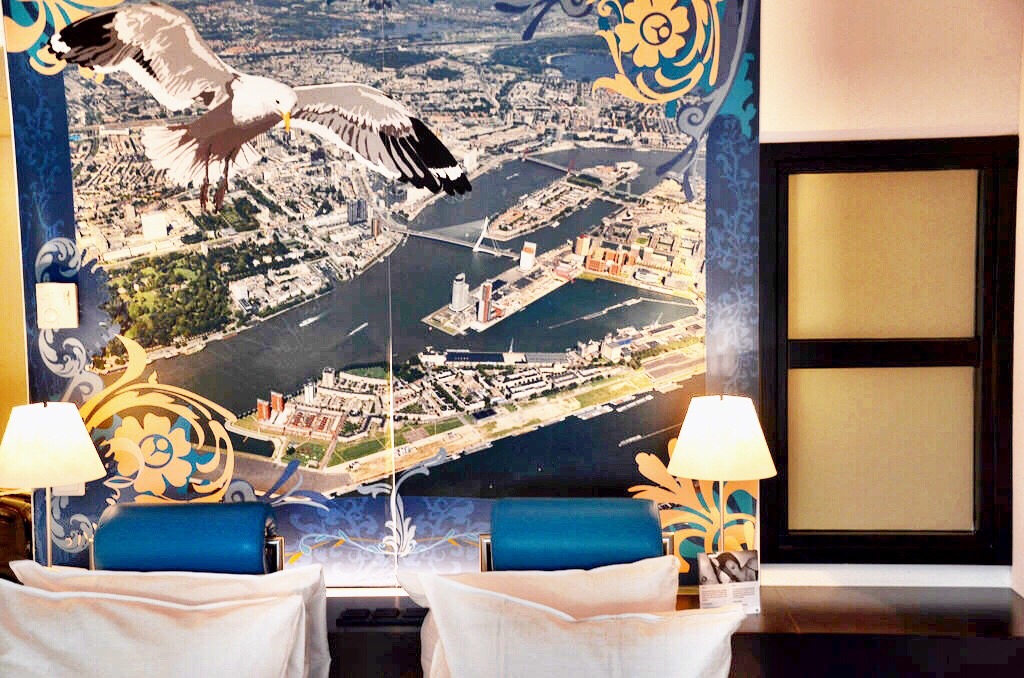 Honorable mention: Location is everything

When choosing a hotel one of the most important factors for me is location. There’s nothing better than a well-situated hotel, not only is it more convenient but it saves me a lot of time and money getting around town. While in Rotterdam I stayed at the Inntel Hotels Rotterdam Centre, a luxury 4-star design hotel next to the Erasmus Bridge with amazing city views and an easy walk to absolutely everything. In Europe there’s a flurry of new art and design hotels popping up, and I love their personalities and senses of style that come together to add a lot to the overall hotel experience. Enjoying a spacious junior suite, my room had amazing skyline views and even a sauna, perfect after a chilly day of sightseeing. Located in the Maritime District, it’s next to the metro and tram stations, making it easy to get to and from the train station. Their food is also surprisingly good, especially the expansive breakfast buffet that was essential in fueling up before a long day of sightseeing.

Have you been to Rotterdam? What did you enjoy doing or seeing the most?