Before a recent visit to Philadelphia, it had been decades since I last played tourist in this, one of America’s oldest cities. It’s embarrassing really, where I live in Washington, DC isn’t far away at all, and yet Philadelphia had been sadly overlooked. That changed when I was invited to spend a few days at The Logan Hotel, part of the Curio Collection by Hilton, with the sole objective of discovering Philadelphia in my own unique ways. Simply said, I had an incredible time relearning the city and so today I want to share just a few of the many highlights that may surprise people who think colonial-era Philadelphia is the only tourist side to the city.

Whenever I visit a new city, I usually start with the classic food for which it’s known. When I’m tight on time though, it can be hard to know the best places to visit or what the iconic not-to-miss local favorites are. Luckily, I have friends in Philadelphia who, along with the concierge team at The Logan Hotel, were able to direct me to some truly outstanding dishes during my short time in the city. The best way I found in Philadelphia to enjoy as much of that classic local cuisine for which is the city is so very well known is to simply spend some time exploring the massive Reading Terminal Market. First opening its doors in the 1890s, today there are more than 100 merchants set inside this classic building. What’s more important though are who those merchants are: small cafes and restaurants, cheesemongers and bakers and everything else a great market should have, including classic Philly delicacies. Suddenly wishing I had more stomachs than I currently possess, I took bites of as many different things as I could, finishing none but enjoying all. We all know Philly’s famous cheesesteak, but the city’s obsession with meat only begins there. Sausages, pork sandwiches, brisket – you name it, and people were enjoying it at lunchtime. The roast pork in particular interested me because outsiders don’t hear a lot about it, but for many folks who call Philadelphia home, it’s the best sandwich in town. Seasoned and cooked to perfection and served with provolone cheese and (usually) broccoli rabe, it is indeed one of those rare perfect sandwich combinations. Right then and there I vowed a return visit if only to continue my culinary explorations. 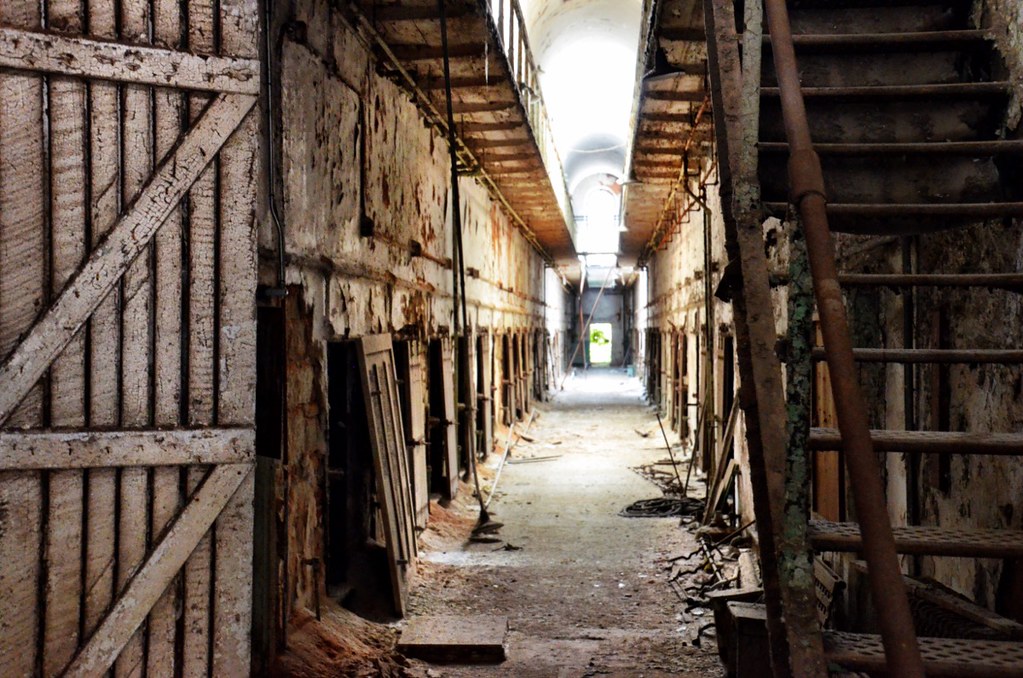 Before leaving home I knew that there was one place I wanted to visit more than any other – Eastern State Penitentiary. Opened in 1829, this was the world’s first true penitentiary. Penitent – the idea was that no man was past saving, if only they had the opportunity to reflect on their crimes. That doesn’t mean this was an easy place to be – Eastern State was a hard life. Each prisoner was in solitary confinement with limited access to the outdoors. The many eerie hallways were actually made to feel like a church – always keeping that idea of penitence in mind. The prison finally closed in 1971, this massive fortress in the city no longer practical. For years it was abandoned, and a small forest even grew in the cellblocks. It was a blight, which is why the city thoughtfully brought it back to life and in the 1990s, it became the city’s newest and perhaps most unlikely tourist attraction. I loved every second though of exploring the corridors and small nooks around Eastern State, a type of industrial beauty that you don’t see every day. 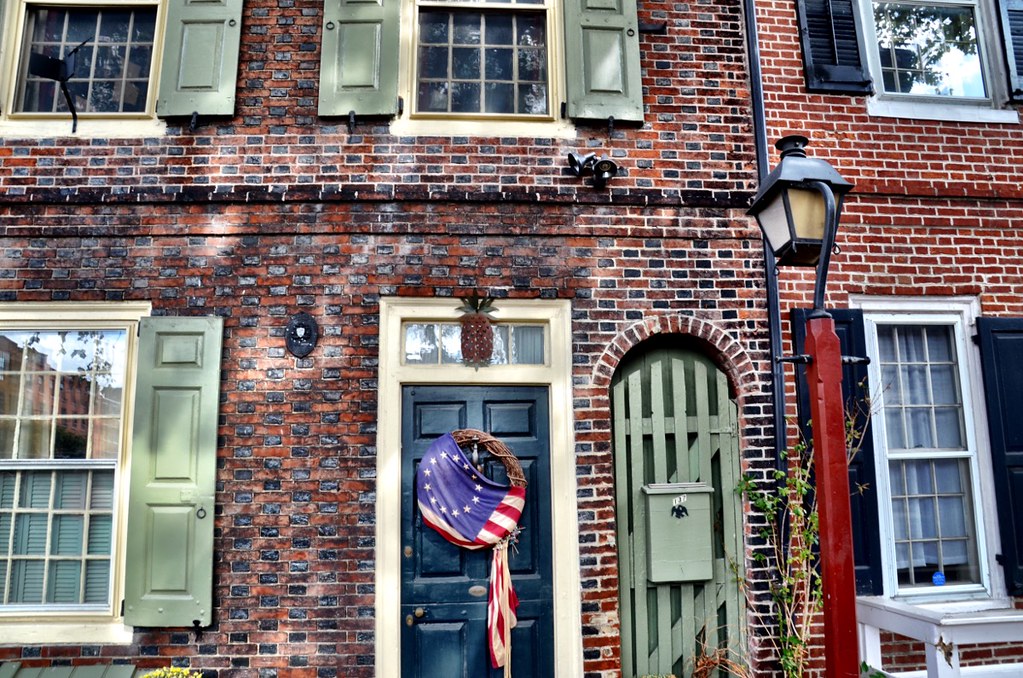 Although I did use Uber a couple of times, for most of my stay in Philadelphia I explored by foot and enjoyed every minute of it. I didn’t realize just how walkable a city Philadelphia is and it’s not only easy, it’s scenic too. On my first day I walked from the Logan Hotel through to the center of town all the way to the colonial-era Old City, seeing a dramatic change of architecture and style along the way. With only general guidance from the kind folks at The Logan, I stumbled upon one of the city’s most popular spots, Elfreth’s Alley. Dating to 1702, this is usually known as the oldest residential street in the US and walking down the cobbled path home to a scant 32 houses, it certainly felt that way. If you think about it, it’s fairly amazing that this quiet window into the colonial era even survived in the first place, which it did through a variety of historical quirks, all of which I’m thankful for otherwise we wouldn’t be able to enjoy this treasure today.

At the other end of the spectrum, once I left Eastern State I decided not to cab back to the hotel, but instead to wander around and see what I could find. Within just a few minutes I was in another popular part of town walking along the mighty Schuylkill River. I rowed crew in college and actually competed on the river back in the day, which is why my first stop was Philly’s famous Boathouse Row, one of the world’s great centers of rowing. From there I followed the river to the museums district, home to the Museum of Art and the Rocky steps, along with many other beautiful squares, boulevards and cultural institutions. It was a fun way to spend the afternoon and helped me to get to know the city a little better. 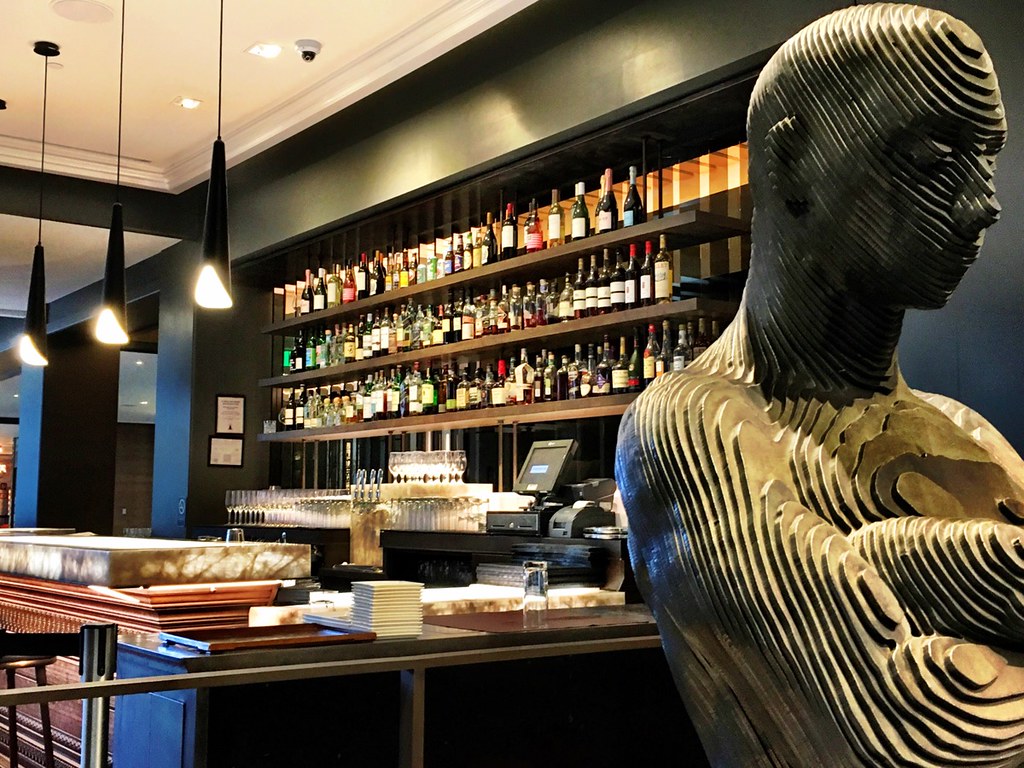 Where we spend the night also matters, and The Logan Hotel couldn’t have better prepared me for understanding the spirit of the city. It sounds hokey, and it probably is, but this hotel recently went through a massive overhaul, changing everything, and in the process incorporated elements that represent what they love most about Philadelphia. Every art piece, no matter how small is a nod to the city and neighborhood; the rooftop lounge offers sweeping views and even many menu items are a reflection of the city. At the end of the day though, we don’t choose a hotel based on artwork or how nice the bar is. We select hotels based on their comfort, convenience and commitment to service and hospitality. This is where the true magic of the Logan shines through. With 391 rooms and 64 suites, most of the rooms still manage to retain their own sense of style and character. Large spaces, luxurious bedding and linens and some incredible views of Logan Circle all come together to create a welcoming and infinitely comfortable temporary home in the City of Brotherly Love. Luxurious but not stuffy, well designed but not pretentious, it’s a fine line to walk, but the Logan manages it expertly. 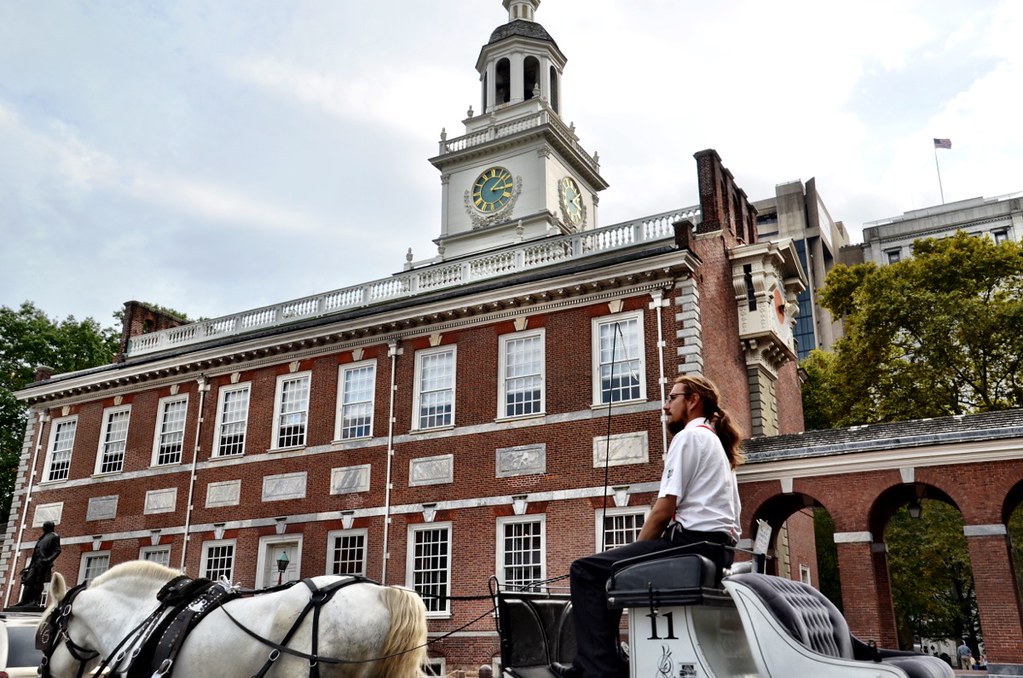 The last time I played tourist in Philadelphia I was 9, so a refresher was not only nice, it was necessary. While obviously the colonial-era sites haven’t changed in the last 30 years, their interpretation has which is why I was happy to be on a Bow Tie Tour led by a local expert. Founders of this small and quirky company were frustrated that actors and not academics either led many tours in the city or that guides simply regurgitated facts. Bow Tie instead specializes in fun, interesting tours that educate and entertain and from my own experience, they’re experts at both. Spending a few hours walking around Old City, I learned a lot even though I had considered myself to be fairly well versed in early American history. It was the ideal way to visit some of the country’s most important sites from the house where Jefferson wrote the Declaration of Independence to Independence Hall and many, smaller stops in between. The story of Philadelphia truly is the story of America, and it’s important that every visitor to the city absorbs as much of it as possible.

There’s a lot more to Philadelphia than first meets the eye and the few days I spent exploring it were fun, educational and of course, delicious.

1 thought on “Some Non-Revolutionary Reasons To Love Philadelphia”