I haven’t written about Toronto many times on my site and with good reason. Until fairly recently, I had mixed feelings about the city. I had never really explored it the “right” way and in the process, I always left town feeling let down and disappointed. That all changed though, as I shared in this earlier post, after working with Destination Canada on a project all about introducing visitors to a local’s version of what to see and do in cities around Canada.

The concept is simple. Locals know the best places to eat and visit in their city, so why not let them guide would-be visitors? The process was straightforward; I shared a few of my general interests and a local resident put together a loose itinerary for me to follow. Since I always considered Toronto to be a city where visitors needed a little guidance from locals, this was a perfect fit. This was also my opportunity to once and for all see whether or not I liked Toronto as a city to visit and whether or not I could finally recommend Toronto to people as yet another fun and interesting Canadian travel destination.

As you can probably guess, this time I left Toronto not feeling disappointed, but elated. I had a wonderful weekend exploring the city; so much so that I wanted to share those favorite moments and why they were so critical in my overall enjoyment of what really is a world-class city.

Tackling Fears on the EdgeWalk

While I do enjoy some adventure travel, I also have a fear of heights, albeit a conditional one. I can look out from the observation tower of a massive skyscraper, but a 5-foot ladder at home sends me into a downward spiral of fear. It’s when the barriers are removed that I get really scared, but it’s a fear I’ve been trying for years to eradicate. The world’s highest bungee swing, tower walks, zip lines, you name it and I’ve tried it, which is how I found myself donning a bright red jumpsuit to prepare for one of the most hair-raising experiences I’d ever attempted – the EdgeWalk at the CN Tower. In 2011, the CN Tower opened the EdgeWalk, allowing thrill-seekers the opportunity to walk around the outside of the Tower at a height of 1,168 feet. It’s the world’s highest full-circle, hands-free walk and I was slightly terrified. I’ve done quite of few of these extreme height experiences, and honestly speaking the EdgeWalk is the most professional operation I’ve seen so far. From start to finish, the staff take amazing care of guests and the safeguards are unlike anything I’ve experienced as well. The views from that height are stunning and it helped me appreciate the beauty of the city even more than I had before.

Eating all of the food

An important aspect to experiencing Toronto is through the stomach, and the itinerary developed by the local based on my interests was the perfect way for me to truly understand the city. Traditional Persian kabobs, quirky breakfast spots with the best granola I’ve ever tasted along with so many more delightful, singular experiences defined my time in the city. But they all have a common theme; I wouldn’t have found most of them with the aid of a local in the know. Looking back at it, maybe one or two eateries would have popped up in my research, but that’s it. Even then, I wouldn’t have “really” known if they were good, I would have questioned online reviews and in the process, may have missed out on these foundational experiences. There’s no doubt in my mind though, any visit to Toronto must include discovering these foodie treasures and enjoying as many of them as possible. 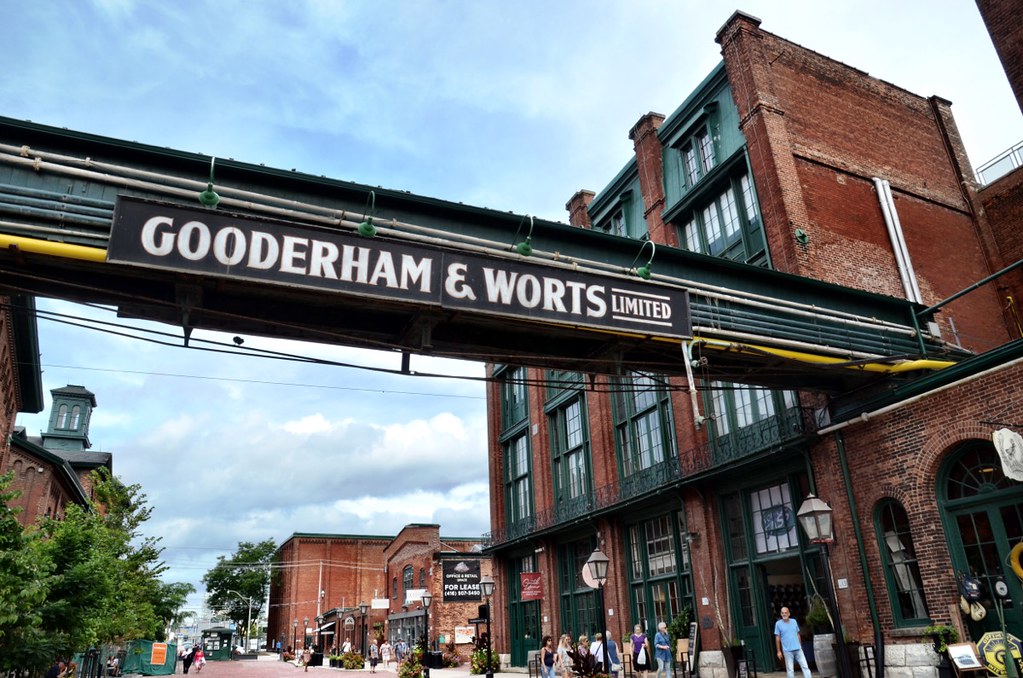 Like all cities, Toronto is always redefining itself and one way to see the cutting edge changes underway is to visit a couple of redeveloped neighborhoods, which my local expert recommended for my visit. Starting at the Distillery District, I immediately fell in love with this steam punk inspired neighborhood. Once home to the largest distillery in the world, the brick Victorian buildings found throughout the large, 130-acre district are a wonderful relic almost lost to time. Sitting in ruin for decades, it wasn’t until the early 2000s when efforts began in earnest to redevelop the neighborhood but the results are stunning. Cafes, restaurants, shops, condos, offices and galleries all call the Distillery District home, and spending some time exploring them was something I’d never do on my own, but which also became a key experience during my brief stay in town.

Luxury at the Fairmont Royal York

There is no shortage of fantastic luxury hotel options in Toronto, but I was particularly excited to stay at the iconic Fairmont Royal York. I’ve stayed at many of Fairmont’s Canadian hotels and I love them most of all for their history. In most cases, these were the first grand hotels in the country, situated in major cities and along key railroad lines, they hearken back to an era of summer-long trips and endless steamer trunks carried along by valets. They transport guests to a more civilized time period, and that was certainly my impression of the Royal York. This was once the tallest building in Canada and for years people visited the city just to marvel at the architectural wonder. It’s not a hotel lost in the past though, having recently refurbished many of their rooms and suites, the hotel is as much about modern life as it is reflecting on its storied past. Add to that an amazing location in downtown Toronto, and this was the perfect spot from which to launch my own exploration of the city.

Getting lost in Kensington Market

Guidebooks call Kensington a “distinctive multicultural neighborhood,” which is a really nice way of saying that it’s a weird but wonderful place to visit. I love Toronto for its tolerance and acceptance of people from all walks of life, and this ethos is found in perfect microcosm in Kensington. People there are a little weird, but that’s what makes it so special. Walking around, colorful, but not destructive, graffiti covered nearly every wall, and a variety of second-hand clothes shops, vintage record stores and small cafes and markets lined the streets. But I was there to eat, and I quickly discovered what is one of the best tacos I’ve ever enjoyed at Seven Lives, a cash-only taqueria serving up the most succulent Baja-style tacos I’ve ever found. It also explained the line out the door, but the wait was well worth it. I just ordered one though, because my afternoon was all about following the advice of the local expert and slowly eating my way around Kensington. The restaurants and small cafes reflect the wonderful eccentricities of the neighborhood, and you can find everything from Rasta Pasta (Jamaican/Italian fusion) to a brightly colored ice cream shop serving homemade popsicles. It was a little hipsterish at times, but the food spoke for the experience and immediately I understood why food lovers flock to Toronto in droves.

The best part of having a local guide me around Toronto was being able to quickly find little nooks and crannies known only to people who live in the city, and Riverdale Park is the perfect example. At the end of a long day of sightseeing and eating, we arrived to this large park just in time to admire the slowly changing colors of the sky. We weren’t alone either, the park was packed with people not only watching the sky light up in hues of purple and pink, but also just enjoying the late summer’s evening, playing soccer or exercising around the hilly park. Sitting there on the bench with new friends, for a little while I stopped feeling like a tourist, I stopped feeling like an “other.” Instead I felt as if I belonged there. Dogs sauntered over to me for a quick pet on the head before rejoining their owners, and kids raced up and down the hill trying to catch each other. It was one of those all too rare perfect moments when we travel, when everything clicks and connects and for a brief moment you feel as if you have been let into a great secret. You start to understand what’s at the core of a new place, even if it’s for a split-second, but it’s almost like an addiction, begging for more opportunities to connect on a deeper, more personal level. The park did that for me, and I can’t thank the Toronto native who helped me navigate the neighborhoods of Toronto enough.

Be sure to check out the Keep Exploring website for even more Canadian travel ideas!