For the casual traveler, a quick glance at a map may lead you to think that the food culture in Wales is similar if not the same as to what’s found in England. And in many ways it is. For generations, Wales wasn’t all that distinguishable from neighboring England, and the English food culture certainly spread around the British Isles. But Wales is a separate and distinct country, in culture and spirit if not politically. Language, traditions and food are unique to this beautiful corner of the U.K. and, as I recently discovered, it’s the food in particular that is so very surprising. You’ll find all the English standards while traveling around Wales, but you’ll also discover little twists or entire dishes that are unique to Wales. Food was such an important aspect of my own journey around the country that I wanted to share my favorite bites in Wales, Welsh food moments so important that they alone will make me return for more.

I had never even heard of Welsh Cakes before my most recent visit to Wales, but they quickly became the star food attraction of my time in the region. For the uninitiated, Welsh cakes are simple, scone-like flatbread cakes made with flour, butter, eggs, milk and usually dried fruit like raisins. They’re typically eaten alone, at tea or as a snack and I found them everywhere while in Cardiff and southern Wales. When served hot, they’re good but if they’re even a few minutes old, I found myself looking for jam or butter to cut through the dryness. While I discovered many great places to buy them, my best experience with Welsh Cakes was learning how to make them myself. Located in Abergavenny, the Culinary Cottage is a cooking school run by an enterprising local who has made food her new career. We made an entire meal that day, but for me the Welsh Cakes were the most fun. Rolling out the dough and cooking them on the hot bakestone was fun and even relaxing and I can’t wait to make them for friends at home.

I am not a fine-dining kind of guy, but even I was blown away by the dinner I enjoyed at the newly Michelin-star awarded Restaurant James Sommerin. Located along a beachy promenade in Penarth, everything about this world-class caliber eatery is done to perfection. The food was fun, creative and of course delicious. Rare for me, I ate everything presented to me and had to stop myself from literally licking the plates clean. Afterwards I had the opportunity to briefly talk with the star chef himself and found myself even more impressed. Low-key, modest and fiercely intelligent, it’s plain to see that he isn’t only one of the best chefs in Wales, but in all of the U.K. and probably Europe. Eating here should be on every visitor’s culinary to-do list. 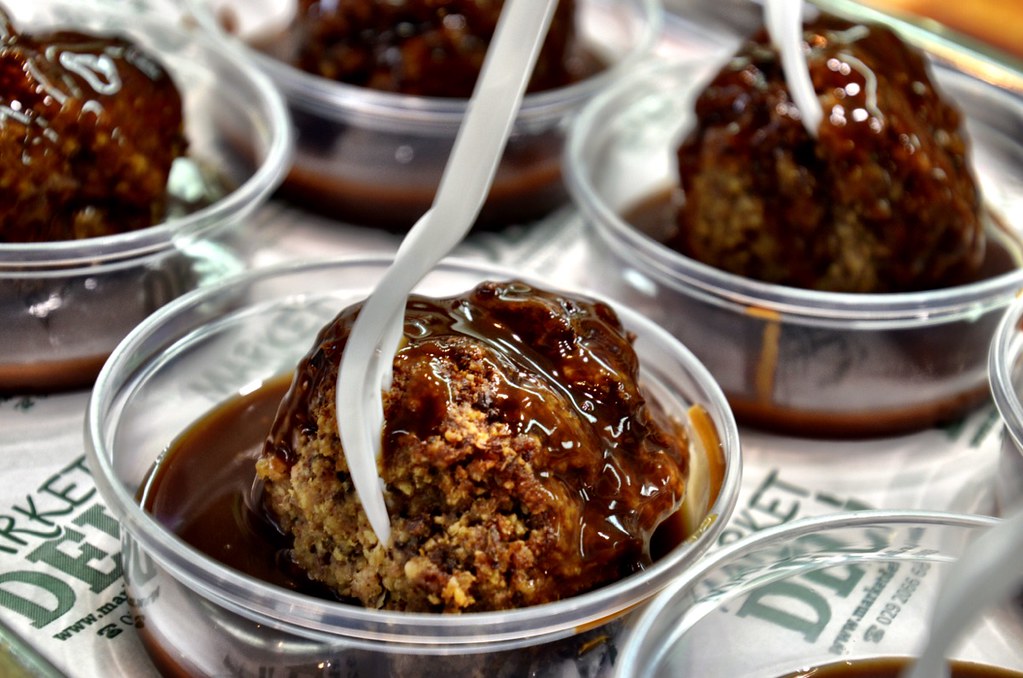 Any country with British origins has some sort of variation of meat cooked in pastry or dough. Meat pies, Cornish pasties, sausage rolls, they take many forms but almost all are tasty and hearty mini-meals you can enjoy on the go. Wales is no exception, and while on a food tour of Cardiff with Loving Welsh Food, I tasted their regional variations, one of which is very unfortunately named. Staring into the deli case I was a little surprised to see the meatball-like creations labeled as faggots, but turns out they’re a popular snack. Faggots are made from pork offal, usually pig heart, liver and belly meat minced together with herbs and breadcrumbs added in. They are then cooked and served with gravy. While I’m not a big fan of offal, I took a few bites and enjoyed what I tried. Definitely not an everyday dish, it’s an interesting culinary experience everyone should try. Next to the faggots were a number of other meat-pie dishes including pork pies, Clark’s pies and a more traditional beef-based meat roll. 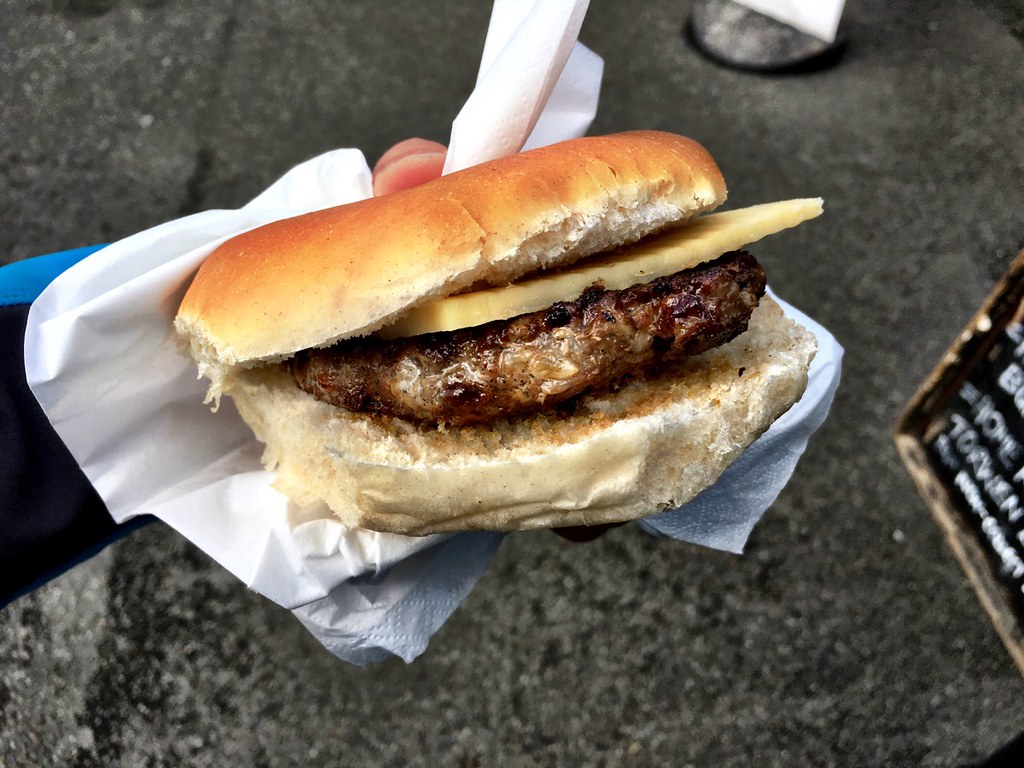 There are about three times as many sheep in Wales as there are people and this prominence is definitely seen in the food culture. At every meal, at every restaurant and on every menu I found lamb cooked in any number of ways. Just like Forrest Gump and his famous shrimp, the Welsh love their lamb and have created hundreds of ways to serve it on a plate. In all honesty though, Welsh lamb is globally recognized to be amongst the best in the world and I took advantage of my time there to try it as often as I could. Whether it was the amazing and expertly prepared lamb entrée I enjoyed at Restaurant James Sommerin, or the lamb burger with Welsh cheddar cheese I had for lunch at a food festival, it was all delicious and obviously all created with great love for the ingredient. Welsh lamb can’t be avoided, so even if this isn’t your normal protein of choice be sure to enjoy it at least once while traveling around Wales. 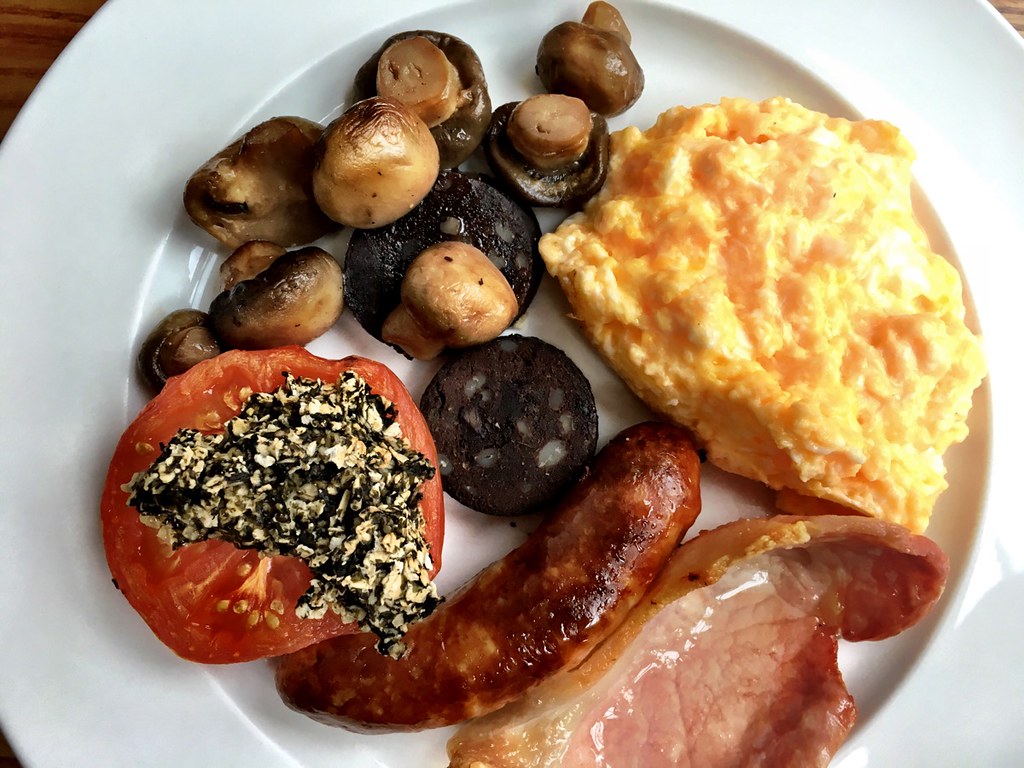 There are few things I enjoy more than a proper full English breakfast. The classic example comes with eggs, streaky bacon, baked beans, toast, mushrooms and boiled tomatoes. Around the U.K. are regional variations and in Northern Ireland, Scotland and even Wales I’ve seen local interpretations of this traditional meal. The Full Welsh includes those standards you’ll find in England, but also with a few additions like black pudding and, most intriguing, laverbread. While not at all for me, laverbread is one of those iconic Welsh food staples and it’s also one of the most simple. Seaweed is boiled for several hours before being minced or pureed. The resulting paste is then rolled in oatmeal and fried. Called the “Welshman’s caviar,” it’s also common to find it served with cockles, whether part of breakfast or not. It’s not something I wanted to eat, but it was interesting to see it show up on my plate every morning.

Just as lamb is a key foundation of Welsh food, so is cheese, much to my own personal delight. Welsh cheddar, Caerphilly, tangy blue – these popular cheeses that we know and love have all been perfected in Wales, and cheese is an aspect of the food culture taken very seriously. To learn more about Welsh cheese, I stopped by the iconic Wally’s Delicatessen in Cardiff, a decades old deli specializing in all kinds of foods, but especially fine meats and cheeses. There’s nothing better than expertly created cheese and after learning more about the varieties, I found myself wishing I could take some of them home with me. 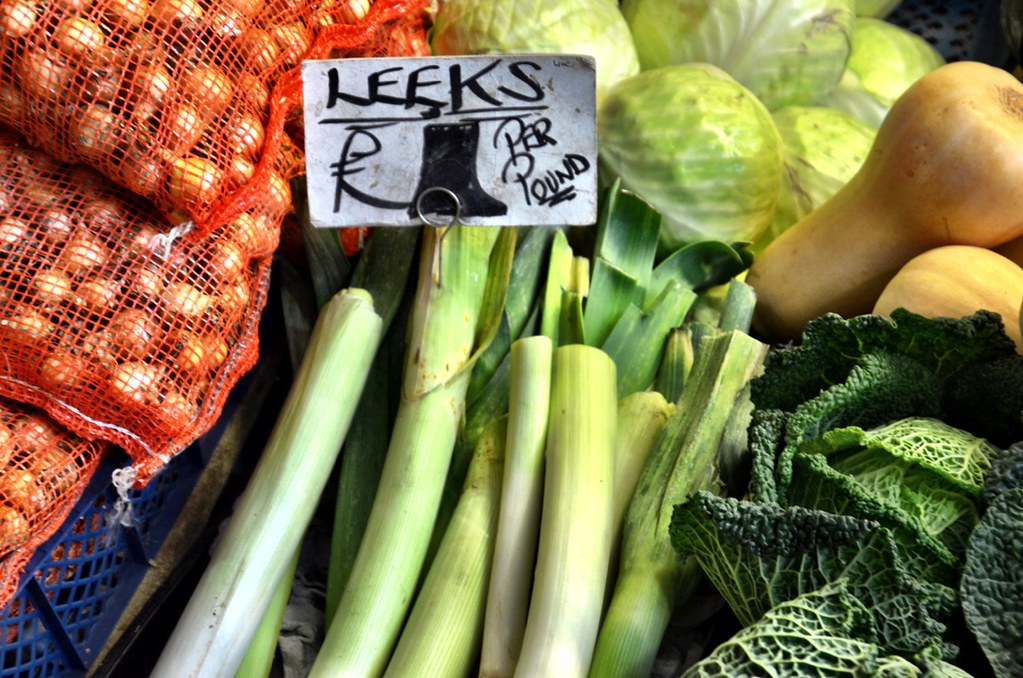 I never realized that countries have official vegetables, but many do and in Wales the leek is the real hero. I’m not usually a vegetable guy; green things are almost never on my plate. But in Wales it’s nearly impossible to avoid leeks and I soon discovered that I don’t hate them as much as I thought I would. In Wales though the mighty leek is more than a nice side dish, it actually has important cultural meanings as well. According to legend, on the eve of a battle against the Saxons, St. David told the Britons to wear leeks in their caps so as to distinguish friend from foe. They won the battle and to this day, Welsh people around the world wear leeks on St. David’s Day and even eat them raw. So in Wales the leeks aren’t just a nice accompaniment, they’re an important part of history as well.

I have yet to find a carb that I don’t love, so it was with eager anticipation that I took my first bite into this very traditional Welsh classic. You’ll most often find this so-called speckled bread at teatime, a Welsh addition to the English ritual. Like Welsh Cakes, bara brith is also incredibly simple, a tasty yeast bread enriched with dried fruits and spices. I had heard that its popularity was in the decline, but I certainly didn’t notice that. I found it offered throughout my time in Wales, most notably while enjoying a classic tea at the Pettigrew Tea Rooms in Cardiff. 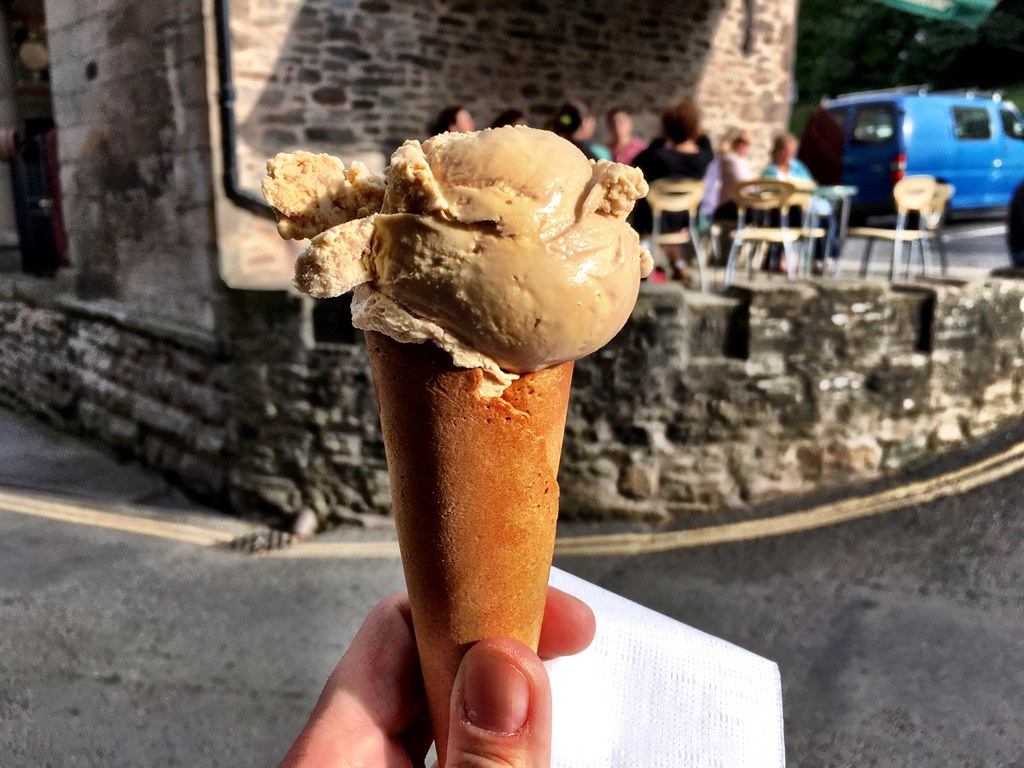 OK, you got me, ice cream is not Welsh. However, I saw it offered with such frequency, that it unwittingly became an important aspect of my snack time in Wales. One of my favorite things to do when I travel is to see what local variations are offered when it comes to ice cream. Sure, wherever we go the classic staples are always offered, but what I look for are those unusual flavors that represent the region or country. In Wales, that meant trying a few different kinds including sticky toffee pudding, a toffee fudge scoop and even ice cream made from goat’s milk. The latter I discovered in the impossibly cute town of Hay-on-Wye, the used bookstore capital of the world. The line was out the door when I arrived and as I soon learned, with good reason. While the texture was different with the goat’s milk, the taste was still there and it was one of my favorite sweet moments of the trip.

I was surprised in every way by the Welsh food staples I discovered, although I know I’ve only tasted just a small sampling of the foodie treats found throughout Wales.

1 thought on “Welsh Food: My 9 Favorite Bites in Wales”