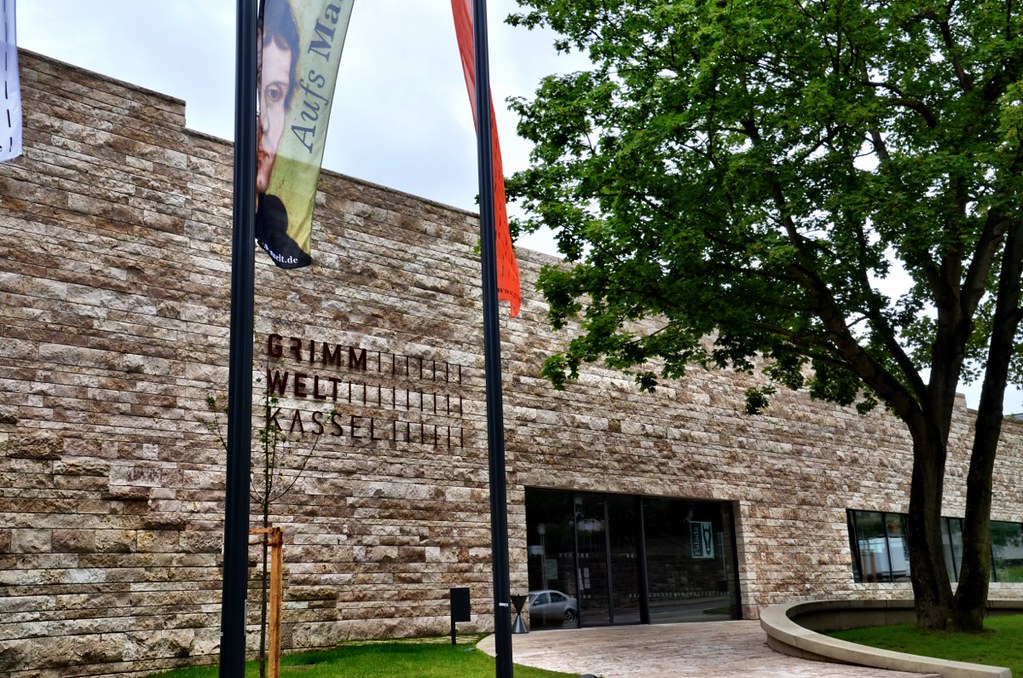 I fully realize that the GRIMMWELT or Grimm World may not be a household name, and that’s fine. Even the large city in Germany it calls home may not be known to you, and that’s ok too. However, the Brothers Grimm, their legacy and even the town of Kassel all deserve not only to be known and understood, but also visited for all of these reasons and more.

Already one of the world’s top museums

Even as Grimm World opened their doors in late 2015, nearly every travel publication around the world highlighted the museum as one of the top new openings of the year. Stepping into the modern main entry and looking around, I could see right away why Grimm World seems to enchant everyone. This isn’t your average museum. The design of the space is modern, very modern actually, and the curation is unlike anything else I’ve ever seen. This isn’t a dry and dusty place to stare at artifacts and read endless placards of limited interest. No, this is a living space meant to engage all types of visitors at all levels and to share with them not only the remarkable life and times of Jakob and Wilhelm Grimm, but their works which have gone on to forever transform world culture.

The location of the museum is purposeful. While the Brothers lived in several cities around Germany, Kassel is where they spent the majority of their working lives and it’s also where they collected most of their fairy tales. The city is as an important aspect of learning about the Brothers Grimm as is Grimm World itself, the perfect symbiosis for anyone who wants to know more about this slightly strange and enigmatic duo.

For many people like myself, the initial draw of Grimm World may be those famous fairy tales, but there’s a lot more to the museum than Little Red Riding Hood. Jakob and Wilhelm Grimm were academics and spent their entire lives reading, researching and writing. The volume of content they produced over their lifetimes is shocking, and the fairy tales are just a drop in the proverbial bucket when compared to their true life’s work – the German Dictionary. Known in German as the Deutsches Wörterbuch, this project organized by the Brothers Grimm sought to create the ultimate, the most thorough assemblage of German words and phrases ever collected. It was a daunting task, so much so that they only completed a fraction of it before their deaths. No, the dictionary ultimately took more than 130 years to complete, passed along from one generation of academics to the next. I learned all of this and more at the Grimm World, but in an incredibly engaging way. Throughout the museum are letters with corresponding stations, one for each letter of the alphabet and therefore representing the dictionary. Behind the letter nooks are exhibits, interactive experiences and displays. It’s a beautiful space to walk through and an even more interesting one to spend hours exploring. 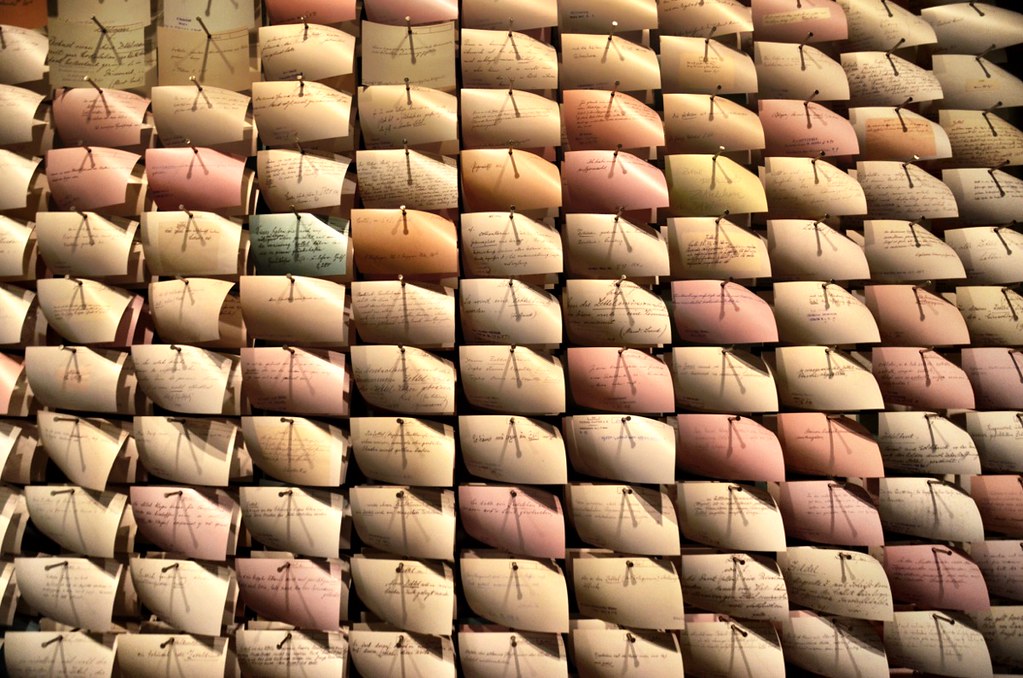 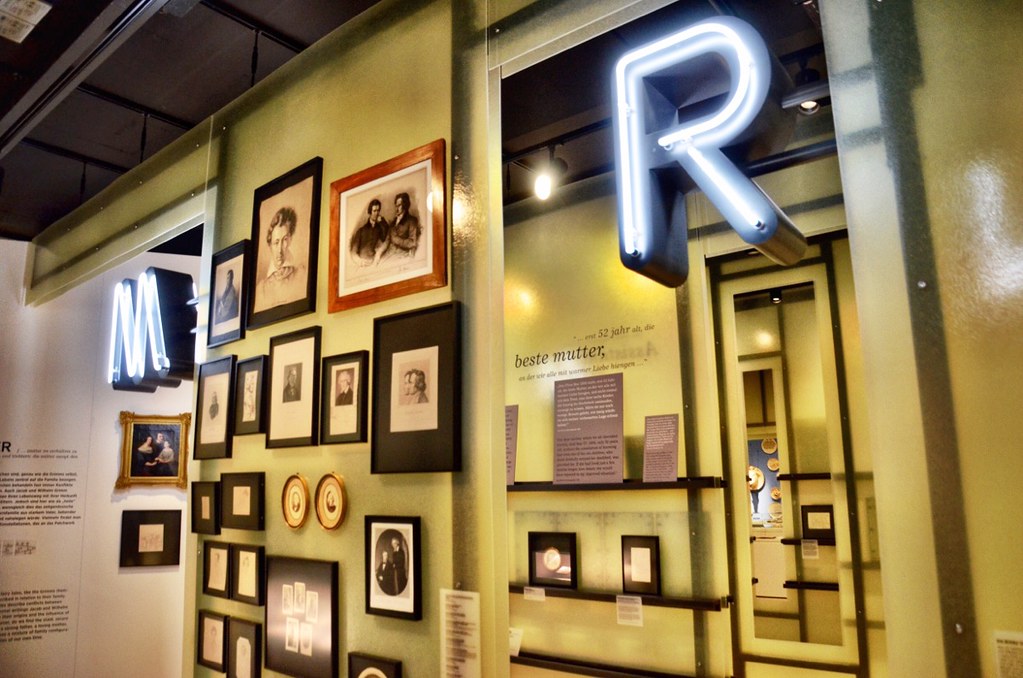 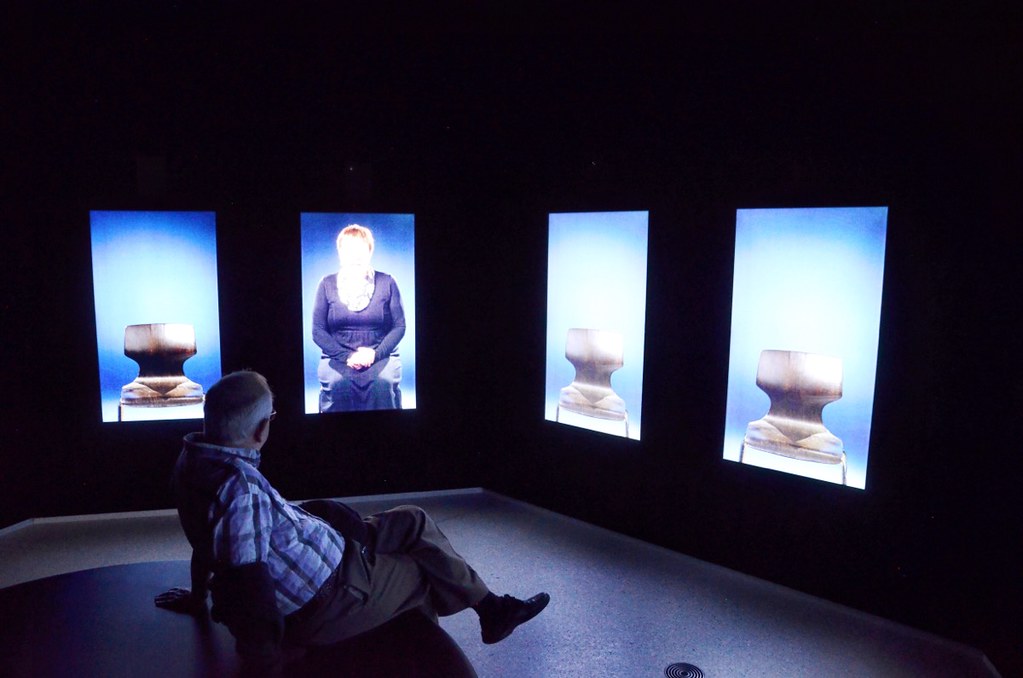 While the dictionary is given the respect it’s due and may have never properly received, the fairy tales and their legacies are also on full display. I think that the Brothers Grimm would be horrified that their most recognizable life’s accomplishment has to do with these children’s stories, but there’s no doubt the impact they’ve had on global culture. The most wildly translated German book in the world, the fairy tales have shaped the creative minds of kids and adults alike ever since they were first published. Grimm World does an amazing job of sharing the tales and their global impact in as creative a way as I’ve ever seen. Whether it’s walking through a makeshift forest, listening to storytellers recite the tales in dozens of languages, or being slightly frightened by a holographic Big Bad Wolf, there’s no doubt that the exhibits grabbed my attention right away.

One thing that I think is important to note is that while Grimm World is definitely interesting and an entire day could be spent at the site, if you’re an English speaker you may want to use one of their trained guides to tour the facility. The resources available in English aren’t as comprehensive as I would’ve liked to see. Maybe that’ll change in future years, but for now one of the knowledgeable tour guides is the best way to learn about the museum and the quirky brothers it represents.

Kassel is perfectly situated to enjoy one of my favorite driving routes in the world, the German Fairy Tale Route. After being inspired by your visit to Grimm World, hop on and explore some or all of the driving trail. The German Fairy Tale Route is a 370-mile route that starts in Hanau and ends in Bremen and features the cities, natural landscapes and landmarks that both celebrate the Brothers Grimm as well as inspired them. The German countryside doesn’t often get the attention it deserves, just one of many travel revelations I had during my week road tripping along the route. From small towns and villages to beautiful forests and mountains, discovering the more natural side of Germany was an unexpected pleasure. Add to that postcard-perfect villages, grand castles and some of the best food in the country and you have a road trip that’s fun and meaningful.

Kassel is a great place to visit

Kassel is located in the German state of Hesse and while it may not be on everyone’s bucket list, it should be. This large-ish city is bustling and fun and has been attracting visitors since long before the opening of the Grimm World. It enjoys a perfect location to explore more natural areas of Germany, especially those sites and small communities along the German Fairy Tale Route. But it’s also home to one of Germany’s most impressive UNESCO World Heritage Sites, the Bergpark Wilhelmshöhe. Built in the 17th century by regional nobility, it’s essentially the biggest water fountain you’ll ever see. Descending a long hill, reservoirs and channels supply water to a complex system that supplies the site’s many grottoes, fountains and a 350-meter long Grand Cascade. In addition to the sights, Kassel is also a world-renowned cultural hub thanks to the unique event documenta, which takes place every five years. Held in a variety of venues around town, documenta is 100 days of exhibitions featuring modern and contemporary art from around the world. The next one is in 2017, so make your plans to visit now since hundreds of thousands of people usually attend this important global event.

GRIMMWELT or Grimm World is so much more than just a dry and dusty museum. It’s a living space, it’s one that has been designed to stoke and encourage creativity and learning, much as the Brothers Grimm have done through their work for generations. Add in the always interesting city of Kassel, and this isn’t just one of the most important places to visit in Germany, but it’s also one of the most fun.

1 thought on “GRIMMWELT – What You Should Know About Grimm World in Kassel, Germany”