There are a few sights around the world that we all want to see one day and as a testament to just how amazing Iceland is, several of them for me all call this island nation home. I had visited most of the sites in Iceland, but until my most recent trip one in particular eluded me –the Jokulsarlon Glacier Lagoon. I honestly didn’t know a lot about it before my visit; I was mesmerized by the photos I had drooled over in magazines and on social media. Visiting the Jokulsarlon Glacier Lagoon was actually a major reason why I decided to drive the south coast of Iceland, and I’m so glad I did. Not only was the lagoon well worth the trek, but the entire coastline is otherworldly, so I thought I’d share some advice and tips on how to best visit the Jokulsarlon Glacier Lagoon and what you can actually see and do once you’re in the area.

Where and what is the Jokulsarlon Glacier Lagoon

It may be hard to believe, but the lagoon is a relatively new phenomenon. Glaciers fluctuate in size due to prevailing global weather patterns and by the late 19th century, the massive Vatnajökull glacier was one of the largest in the world. As temperatures gradually increased, the glacier retreated and one of the many by-products of this movement was the creation of a large lagoon during the 1930s. I can only imagine what it was like to watch the incredible geological powers at work, but in Iceland that’s really just par for the course. Over the following decades, the lake expanded into the star attraction it is today.

The lagoon itself is one of the deepest lakes in Iceland, more than 600 feet deep, and is full of mighty icebergs in a array of colors floating around the waters after having been calved from the glacier itself. From Jokulsarlon lake you can see the vast dome of ice that is the modern-day ice cap, an incredible glacier that spills into the lagoon. That’s what I was ultimately there to see and I couldn’t wait to hit the water.

The Jokulsarlon Glacier Lagoon is easy to reach; it’s directly on the Ring Road between Höfn and Skaftafell in southeastern-ish Iceland. The drive is part of the fun, but I’ll get to that in a few paragraphs.

Booking a tour at the Jokulsarlon Glacier Lagoon

I’m a planner and as it turns out that personality trait is important when organizing a visit to Iceland during the summer high season. Iceland is one of the hottest tourist destinations in the world right now; thousands descend on the small country every week to see the natural wonders for themselves. That’s great and has helped Iceland in any number of ways, but if you want a decent hotel or your first-choice activities, then you need to plan in advance. That’s the case when visiting the Jokulsarlon Glacier Lagoon – sort of. I say sort of because there are a variety of touring options once you get to the lagoon itself, and not all require you to plan in advance. 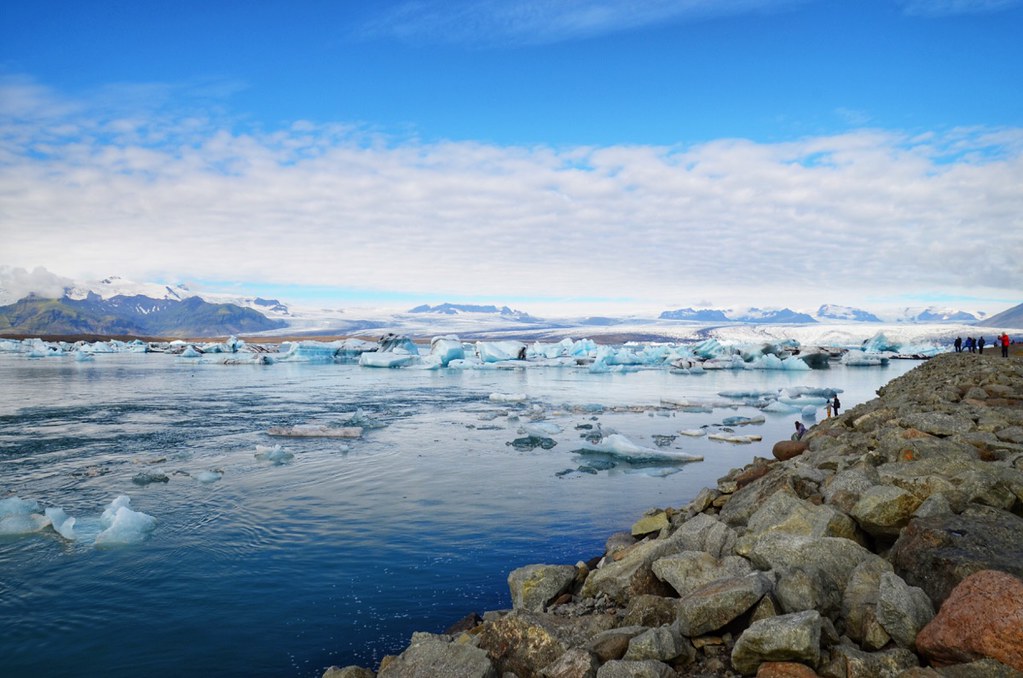 Admire from the shore – Driving past the lagoon there is no way anyone can miss this amazing natural attraction, and I mean that. Adjacent to Route 1, the lagoon appears suddenly and impressively almost out of nowhere. Well, that’s not quite true, the glacier is seen long before the lagoon, but the floating icebergs and the lake itself were an immediate surprise for me even though I was expecting them. With plenty of parking available, I jumped out of the car and rushed to shore, standing in awe of the impressive lagoon in front of me. It was incredible and more than lived up to every expectation I had of this famous sight. So yes, you can just drive up, admire the icebergs and leave, but there’s so much more to see and do here it would be a shame to miss them.

Amphibious boat ride – I have no facts on which to base this claim, but I have to believe taking an amphibious boat tour of the lagoon is by far the most popular way to get out on the water and closer to the icebergs themselves. I say this based on the lower cost of the experience and the frequency of the tours. If you’re not familiar with this unique mode of transportation, they are boats that can also drive on land, picking up guests along the shore and then plunging into the lagoon. The overall excursion stays fairly close to the shoreline and lasts about 40-minutes, taking guests alongside those icebergs closest to land. While I would personally book this tour in advance, many folks have told me that it’s not necessary. It really does depend on the time of year when you visit but given how many tours are offered every day and how many people the boats can accommodate, getting on a tour shouldn’t be a problem. The amphibious option looks like a nice tour and everyone I’ve talked to who has done it has liked it, but I wanted to do something different. Since this was such an important activity for me and I had frankly waited so long to visit, I wanted to experience it in the best way I could, which brings me to the third option at Jokulsarlon Glacier Lagoon. 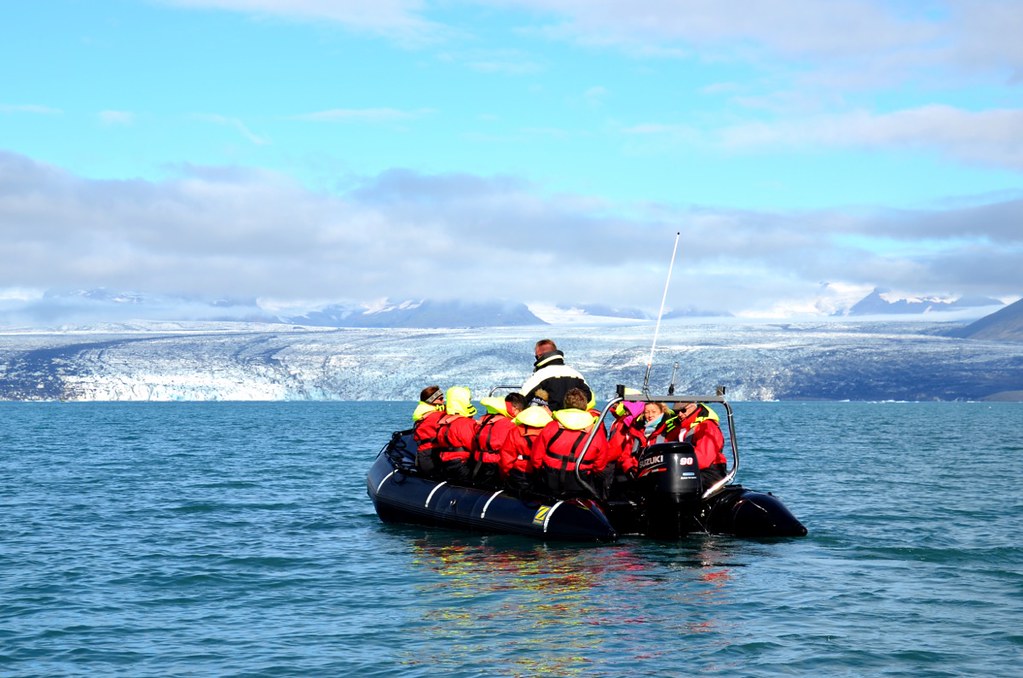 Zodiac tour – Rigid inflatable boats (RIBs) are lightweight and high-performance boats, the most well known manufacturer of which is Zodiac. They’re found all over the world from Antarctica to the Arctic and are great to use when you need to get around fast and through a variety of different water environments. They’re also just a lot of fun, and as soon as I saw the Zodiac option at Jokulsarlon, I knew which tour I wanted to join. I nearly missed my opportunity though because, unlike the duck-boat tours, the Zodiac tours aren’t run as frequently and they can’t accommodate nearly as many guests, which means advanced booking is essential. The first tour company I looked at was already sold out, but then I found a second company that still had some availability – Ice Lagoon Adventure Tours.

I was as excited as I’d been in a long time, practically jumping up and down from excitement (seriously) as I waited for the tour to begin. It was easy to find the Adventure Tours facility next to the lagoon, and I was quickly checked in and confirmed for the tour. Meeting my fellow boat mates, there was a palpable excitement among the group; how couldn’t there be? We could all see how amazing the lagoon is in person, but to experience it in a way that only a Zodiac can provide surely would be something extraordinary. Suiting up in large flotation suits and life jackets, we boarded the boats and made our way out onto the water. The biggest different between the duck-boat and the Zodiac tours are what the two boats can actually do. Zodiacs are fast and nimble, which means they can cover a lot more water than an amphibious boat could ever hope to. The amphibious boats are relegated to investigating the icebergs closest to shore, but immediately our captain steered us into the opposite direction, towards the tongue of the glacier itself. 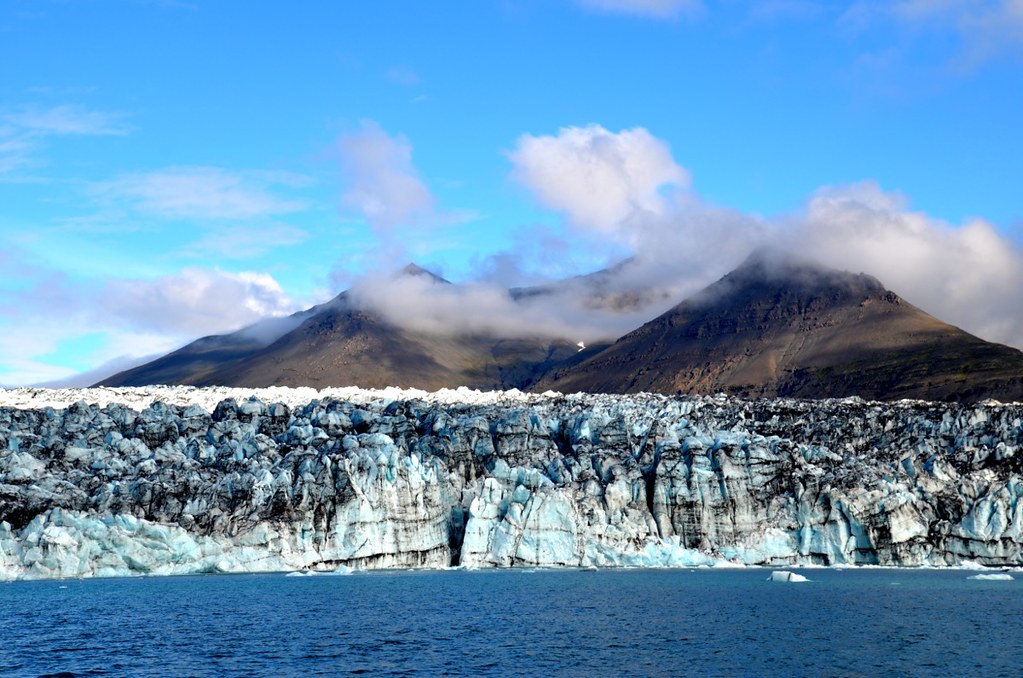 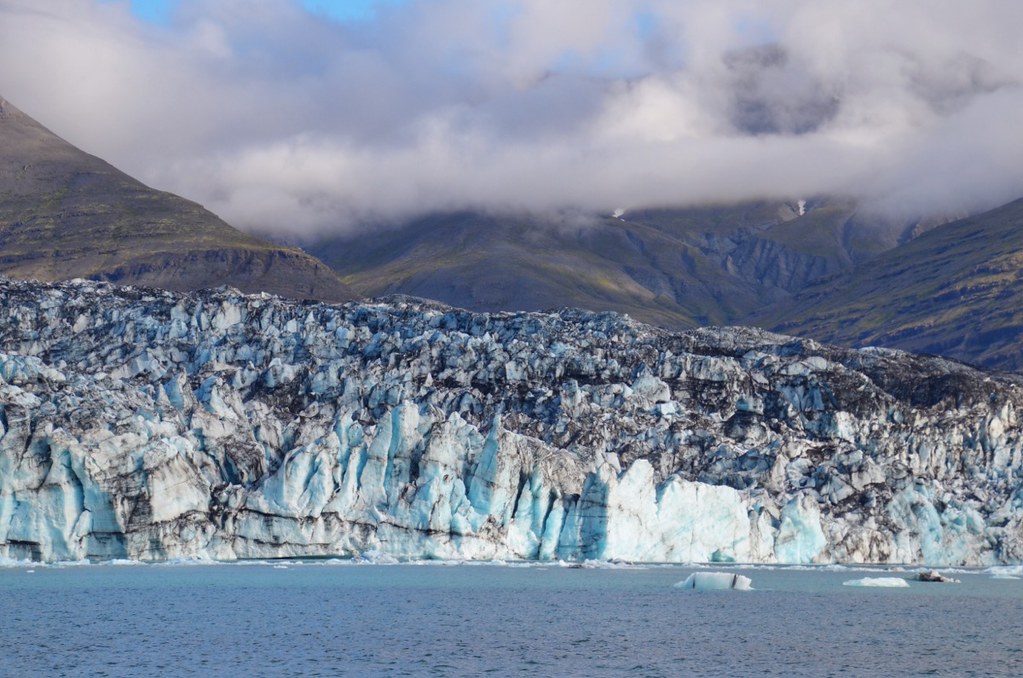 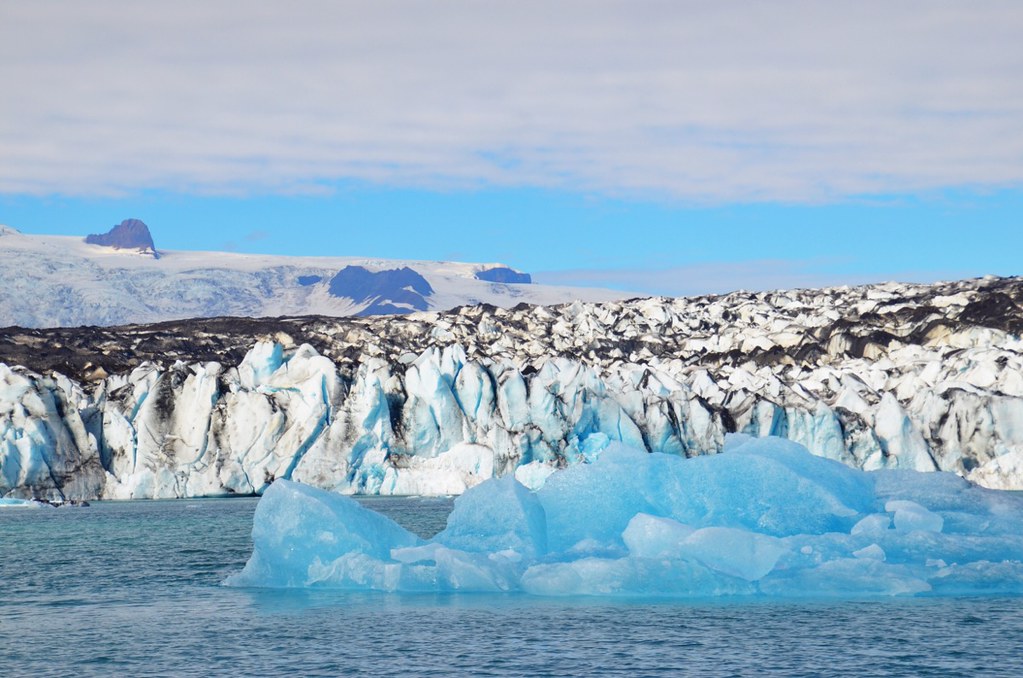 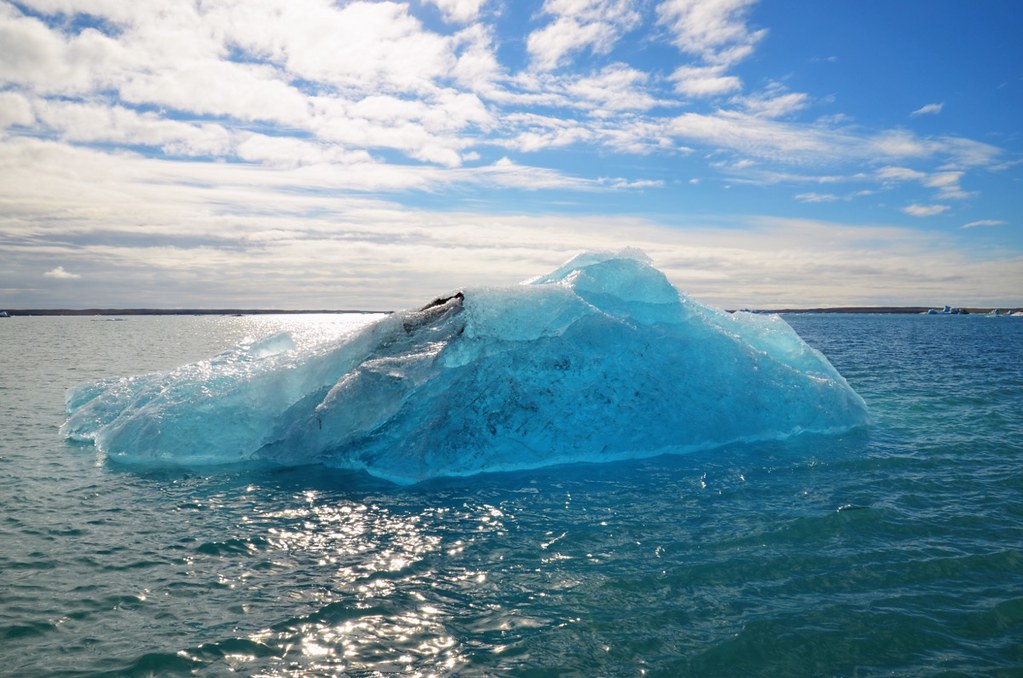 The lake is a large one and the heart-thumping ride took about ten minutes. I could feel the temperatures drop the closer we got to the glacier and I suddenly wished I had thought to bring gloves and a hat – a strange sensation in the middle of summer. Then suddenly we stopped, getting as close to the glacier as was safe to admire the beauty of this impressive sight. Right away I heard the sounds of calving ice and the sploosh as the newly formed iceberg plunged into the water below. It was extraordinary to be there next to the glacier, surrounded by icebergs and the beauty that encompassed us all. This is part of the magic that is Iceland and this is exactly what I wanted to experience in person. For about an hour we trolled the waters, driving around icebergs of all shapes and colors and just experiencing the beauty of the lagoon for what it is. Towards the end of the tour we doubled back to the lagoon, joining the duck-boaters and full of our secret knowledge as to how amazing the lagoon truly is. I absolutely made the right choice in booking the Zodiac tour and if you want an adventure experience you’ll never forget, it really is the best tour at Jokulsarlon.

What to do around the Jokulsarlon Glacier Lagoon

While the lagoon is obviously the major attraction in this region of Iceland, there is more to see and even do. What impressed me most was the drive itself. Leaving from the town of Kirkjubaejarklaustur (NOT a made-up word), it was amazing to see how the landscape changed the closer we got to the lagoon. From green pastures the terrain quickly shifted to a desolate, black sand plain – remnants of the glacial activity in the region. It was also when I first caught site of the massive glacier itself, one of the largest between the two polar ice caps. Almost as suddenly as it appeared, the black sand desert ended and in its place fields of massive moss-covered boulders that stretched out for as far as the eye could see. It was as if giants had placed the oversized marbles there long ago, a game forgotten to time. This is Iceland; this is the beauty that so many people travel to see in person. Yes, the Jokulsarlon Glacier Lagoon is amazing, but so is everything around it so be sure to spend some time admiring and exploring it as you make the easy drive to the lake itself.

One last tip which is especially important if you visit the lagoon around mealtime. There’s not much in this part of Iceland and in terms of food, only a small café at the lagoon with fairly limited options. Wanting something more, I asked our boat captain if there were any other options and he let me in on a great secret. An easy 15-minute drive east from the glacier lagoon is a small country hotel and restaurant, the Hotel Hali. This is the only food option for MANY miles, but lucky for me it was a delicious one. The owners may be a little gruff and the menu somewhat limited, but the homemade lamb stew and warm bread was the perfect antidote to a chilly morning out on the water. Add in a traditional Vinarterta dessert, and it was one of the simplest, but also the tastiest meals of my trip.

The Jokulsarlon Glacier Lagoon is one of those iconic activities in Iceland that I think everyone should experience. Not only is the lagoon itself a natural wonder, but so is the part of the country it calls home. Soaring green cliffs, black sand deserts and more all wait to be seen and discovered, adding a special dimension to the drive that I never expected, but which has endeared the region to me forever.