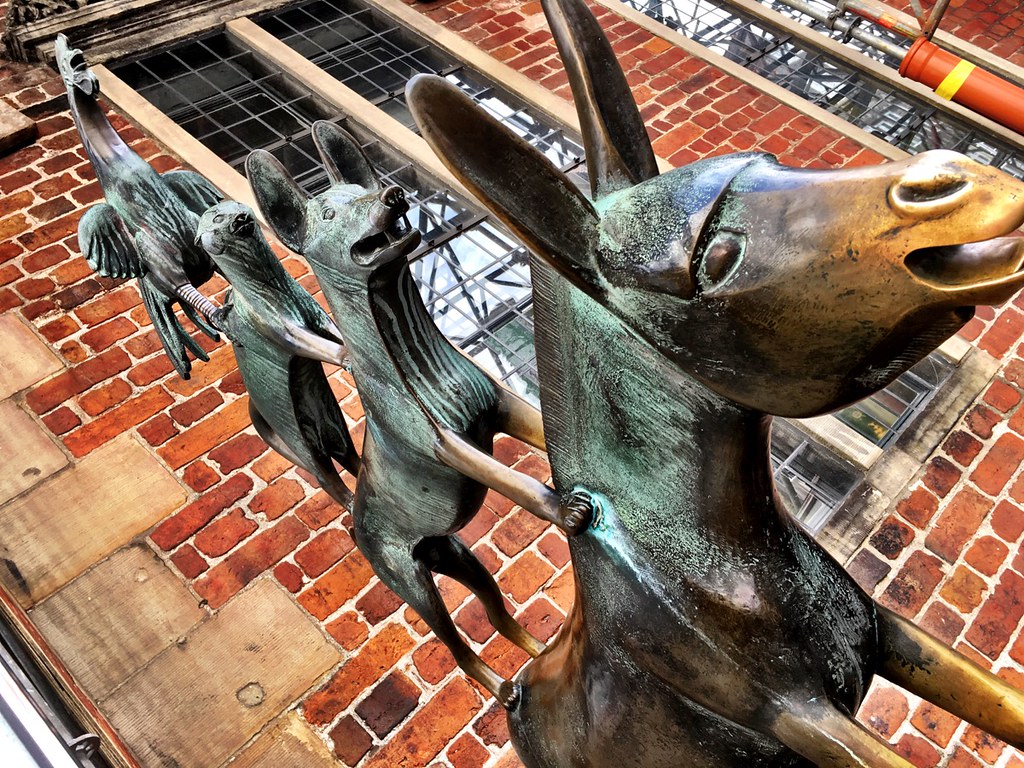 I very quickly learned that people from Bremen are extremely proud of being from Bremen, and probably rightly so. The smallest state in Germany, this former Hanseatic League city has always existed in its own special orbit, depending on no one else and flourishing in spite of the many odds against them. Nearly completely destroyed during WWII, the city has once again proven what it means to be Bremen-proud and as I discovered on a day of exploration around town, the spirit of Bremen is indeed something very different but also very special.

Starting my week long exploration of the German Fairy Tale Route near Frankfurt, Bremen wasn’t only my last stop, but it’s also the official end of this fun and informative drive through Germany’s pastoral side. Interestingly enough, it’s unlike any other stop along the way. One of Germany’s largest cities, this is a bustling metropolis that isn’t only successful today; it’s almost always been a wealthy and influential city. But ultimately, it was the Grimm Brothers fairy tale that brought me to Bremen; one I think most of us know fairly well. In brief, the story of the Town Musicians of Bremen is about a small group of farm animals, all on the run fearing for their lives for one reason or another. They are traveling towards Bremen due to its reputation for accepting everyone, but along the way they get hungry. They soon find a small house along the road and inside are thieves enjoying a lavish meal. The animals fool the thieves into leaving and the animals eat their fill and soon fall asleep. The thieves return and again the animals scare them away, living out their days in the house. Yeah, I don’t know what it means either, but the city of Bremen has thoroughly adopted the tale and statues devoted to the Bremen musicians (I also don’t know why they’re called musicians.) are everywhere around town. Although you’ll find tributes to the fairy tale throughout Bremen, the “classic” statue is in the middle of town right next to the UNESCO recognized Town Hall. 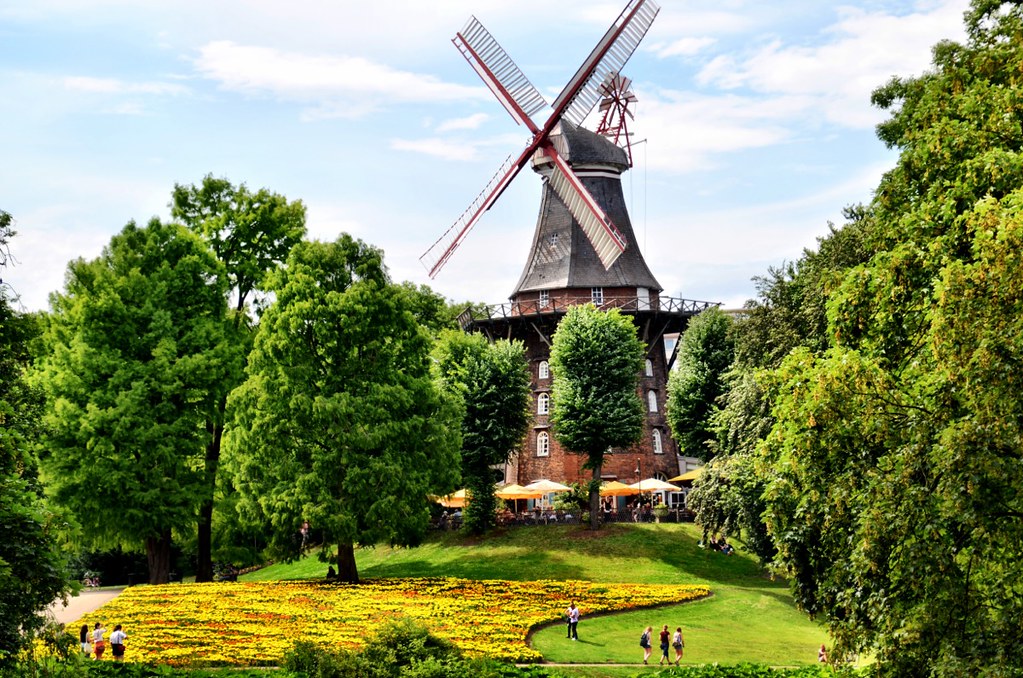 For such a large city, I was surprised by the fantastic parks and other green spaces found throughout the city, but especially the one encircling the old town. There’s a reason for the ring of parks actually and I think it’s a fascinating historical quirk. Wallanlagen Park sits on the site of the original city fortifications. A series of ramparts forming an extra line of protection once encircled Bremen, especially important due to its wealth and power, When the walls were taken down, the parks were designed and installed by Dutch horticulturists, which is why at one time there was also a series of windmills around town. Today just one remains, the Am Wall Windmill. Originally built in the 17th century, today the many-times rebuilt structure is a heritage listed building and home to a great restaurant where I enjoyed my first meal in the city.

Given its size, Bremen is very much a city of neighborhoods and one of the most interesting to visit is also one of the city’s oldest, the Schnoor. For centuries, this working class part of town was very much one of the poorer areas of Bremen. Near the water, the Schnoor was all about shipping, and ropes, cables and chains were all manufactured in or close to the neighborhood. It’s also the only part of the medieval core of Bremen that has preserved its traditional look and feel and most of the homes and shops date back to the 18th, 17th and even 15th centuries. Today it’s a trendy part of Bremen and thanks to its classic architecture is also one of the most popular for tourists to visit. A very easy walk from the town center, spending the afternoon strolling the small streets and alleys, discovering cafes, ice cream shops and stores was an ideal way to better understand the history of the city. 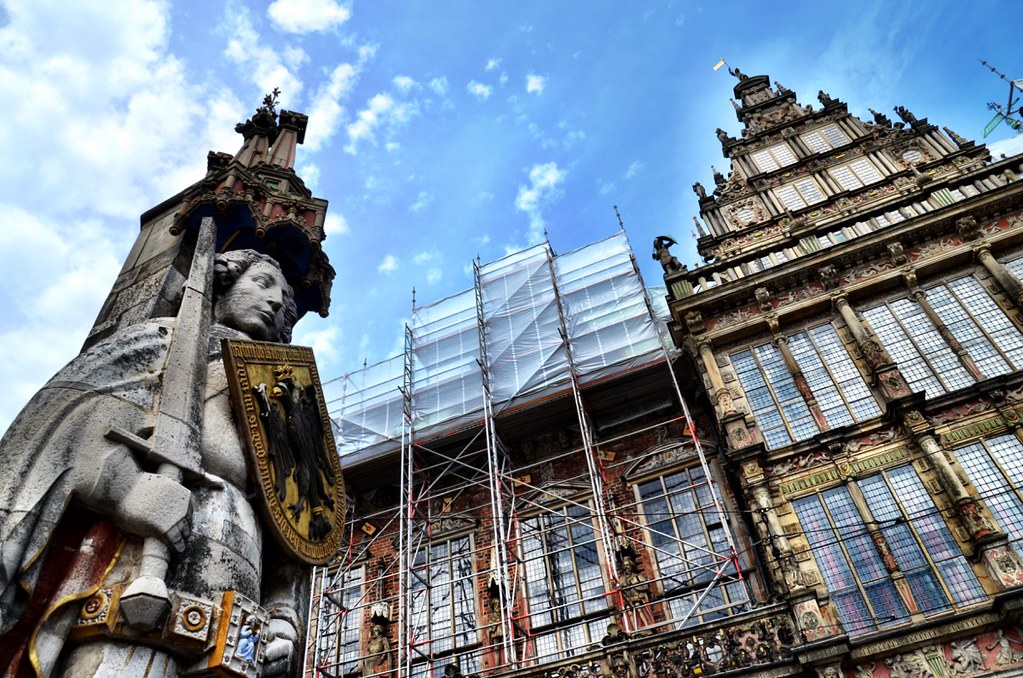 The Schnoor isn’t the only place in Bremen where you’ll find amazing architecture and plenty of history, you need look no further than the UNESCO World Heritage Sites Bremen City Hall and the statue of Roland to be impressed by the legacy of this Hanseatic City. Recognized by UNESCO for its “exceptional testimony to civic autonomy and sovereignty,” the town hall isn’t only one of the finest civic buildings in Germany, it’s also the only European town hall built in the late Middle Ages that hasn’t been destroyed or altered. It’s impressive from the outside but, with a guide, visitors are also allowed inside this massive and elaborately decorated landmark. 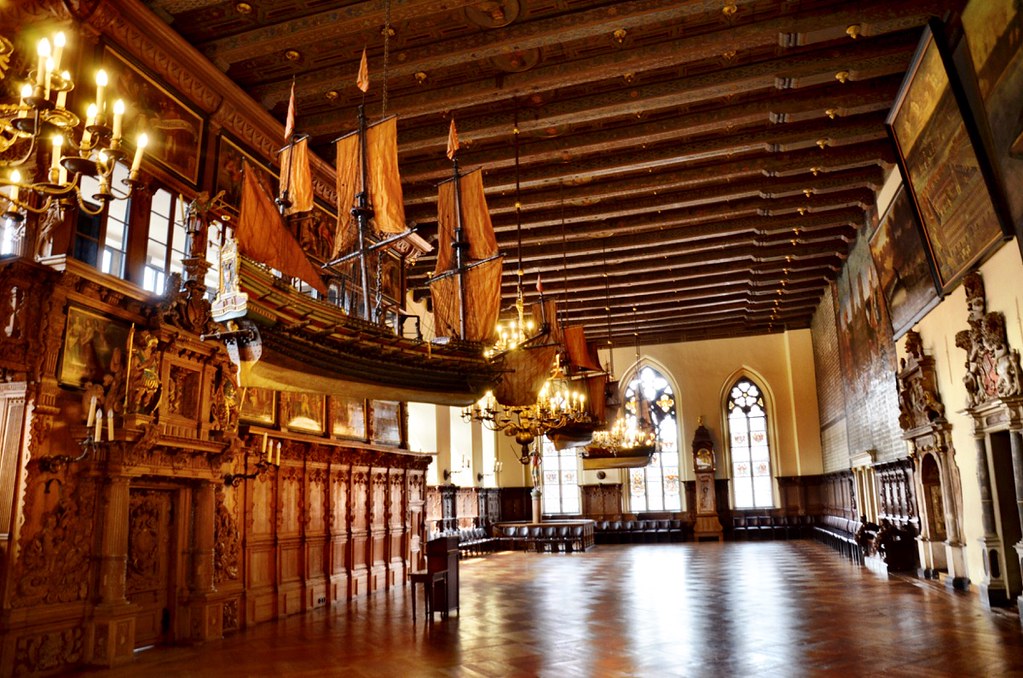 Next to the Town Hall is the curious statue of Roland; a 600-year old work of art also protected by UNESCO. Its meaning took me a little longer to figure out, but as it turns out Roland means a lot more to the city than just a nice looking statue. An important figure in the times of Charlemagne, he has come to symbolize civic liberty and freedom, both at the heart of the Bremen experience as our friends the animal musicians can testify. Together, the two landmarks are gorgeous to see in person and a highlight of any visit to the city.

Germany’s regions are famous for their own special meals and dishes, unique to individual cities and towns and are an important aspect of learning about the culture when traveling in Germany. Trying these new-to-me dishes is something I always enjoy doing in Germany, and while in Bremen that meant ordering up a plate of knipp. Like most local delicacies, knipp has very humble beginnings, a way to use leftover meats from other meals. Over time, this concoction made of an assortment of meats, oats, seasonings and other bits has turned into a wintertime tradition in Bremen, usually served with applesauce, potatoes, pickles and of course bread.

I also have a fierce sweet tooth which was why I was thrilled to discover a locally made chocolate to which the people in Bremen seem slightly, but happily, addicted. Family owned since it was founded in 1890, Hachez Chocolate is a Bremen institution and with good reason. Using a special recipe that has been handed down through the generations, the chocolate is milky, light and sweet in a unique way I haven’t tasted before. It’s a delicious treat to pick up after a long day of sightseeing and makes for the perfect gift to take back home. I eat a lot of chocolate all around the world, and this is easily one of my new favorites.

Riverside Dining Along the Schlachte

My favorite moment in Bremen though wasn’t learning more about its impressive history, or even looking for the more than 1,000 statues devoted to the Town Musicians of Bremen. No, my favorite moment was a leisurely dinner, this one along the city’s expansive waterfront area known as the Schlachte. There I found dozens of biergartens and restaurants, creating a peaceful and relaxed pedestrian zone that combines great food and drink with stunning views. I was there on a warm summery evening and it seemed that the entire city decided to join me in hanging out with friends, talking and laughing and of course eating. I splurged on a traditional dinner from the region, chatted with new friends and enjoyed a perfect evening of just appreciating the city for its atmosphere and the people who call it home. There’s really nothing better in my opinion and for me was the most important moment of my time in beautiful Bremen.

4 thoughts on “Bremen, Germany – 6 Reasons Why I Love The City”