Newfoundland is massive, about the same size of California but with only about 500,000 people living there. That’s 1/76 the population of California for the math nerds out there. That means driving through Newfoundland involves a lot of driving through absolutely nothing at all, especially since the population is largely scrunched up along the coastline. That’s what I experienced on my way from St. John’s to the ferry terminal that would eventually take me to one of the most unique and certainly interesting places I’ve ever been, Fogo Island. I’ve visited other islands before; I was prepared for quirky people, strange traditions and lovely scenery. I saw all of that no doubt, but I also experienced so much more during my weekend on the island that it warrants some explanation as I struggle to define what the admittedly brief experience meant to me on a very personal level.

Where and What is Fogo Island

When it came time to plan my trip to the Canadian province of Newfoundland and Labrador there was one place I knew I simply had to visit – Fogo Island. The reason was simple; the island is home to one of the top hotels in the world and definitely one of the most unique luxury properties I’ve ever seen. Social media had worked, the incredible photos I saw ALL THE TIME of this hotel made me desperately want to visit. I didn’t know where it was, I knew nothing about Fogo Island or how to get there and frankly I didn’t care. All I knew was that I had to visit the Fogo Island Inn. I’m thankful for that too, otherwise I would never have been fortunate enough to experience everything that makes the entire island, not just the hotel, so incredibly amazing.

Since you probably don’t know a lot about Fogo Island either, I thought I’d provide a brief primer. Located off the northeast coast of Newfoundland, Fogo is the largest of the province’s offshore islands at a whopping 25km long and 14km wide. It’s home to around 2,000 people spread out across a variety of communities, depending on the time of year. It’s an old place though, like much of Newfoundland it was among the first places colonized in the New World. Fishermen first started visiting the island in the 16th century and it was later settled by Irish and English visitors. This was and is an isolated place though and even the communities on the island have long been separate and distinct from each other. 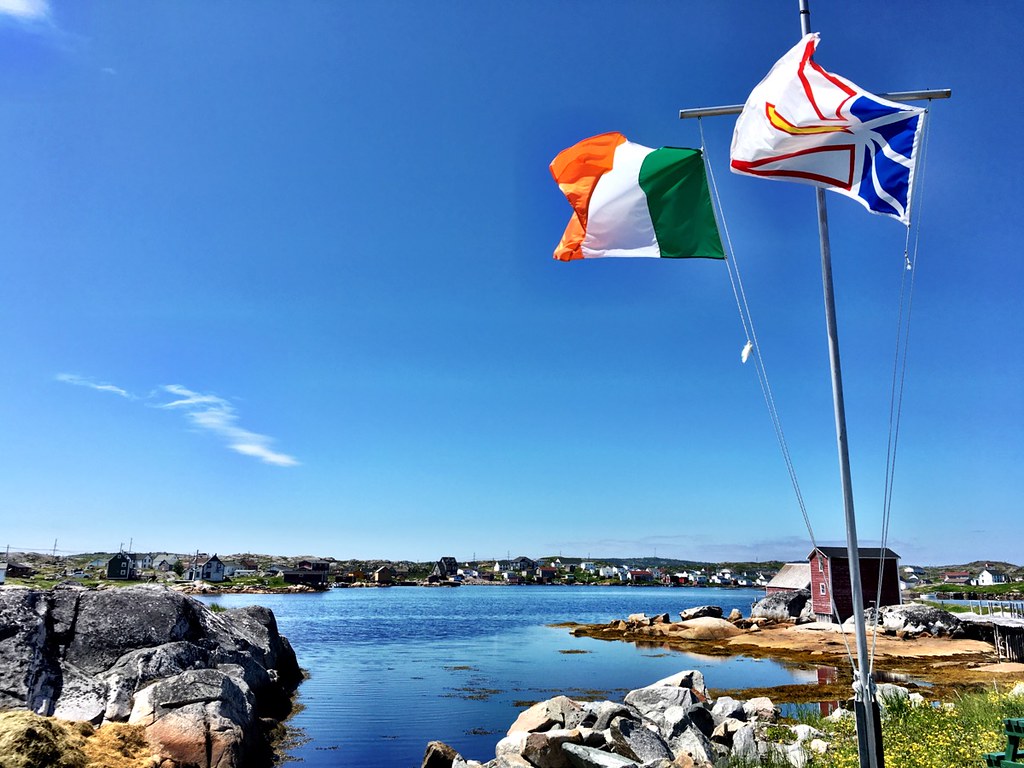 In the Irish settlement of Tilting, for example, the accents are all Irish, the customs and traditions are all Irish and if you suspended disbelief for a few moments you could easily imagine yourself on the Emerald Isle. Running water, electricity, roads and cars didn’t make their way to Fogo until the early to mid-20th century or so and it’s long been studied by anthropologists for its peculiarities that separate it from just about any other place on the continent. It’s a special place; the people who live there are connected to it in every way and are fiercely proud of their home. Those personality traits may have inhibited growth for a while, but today it’s the sole reason not only for its survival, but its ability to grow and even thrive. 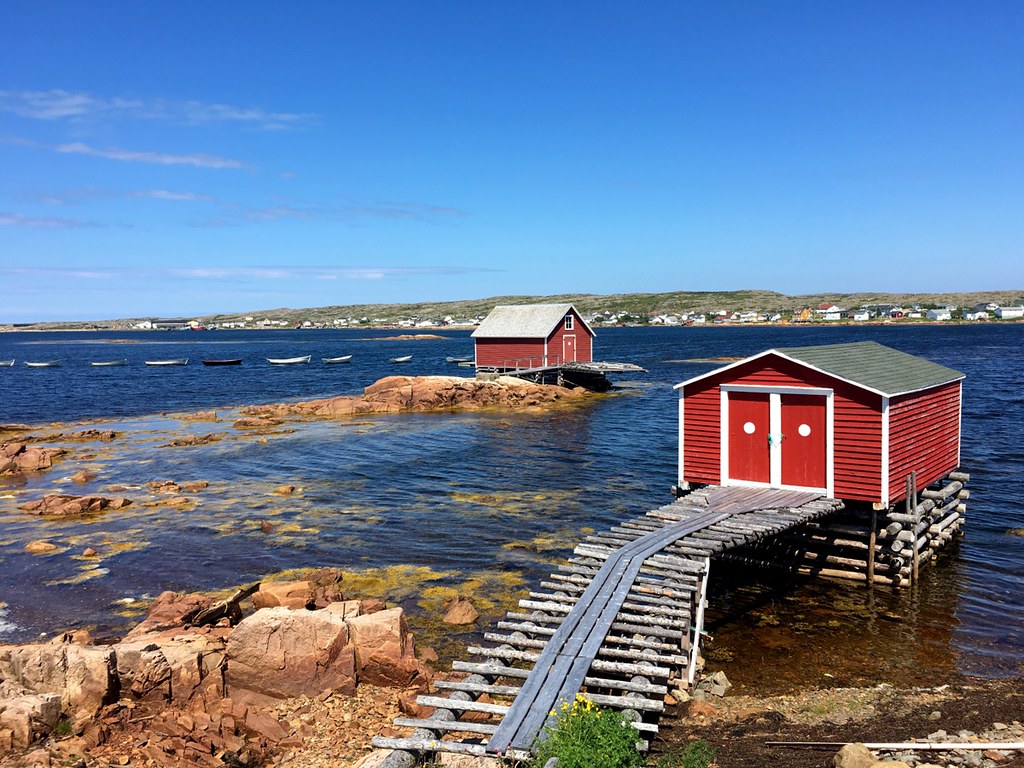 What Makes it Special

I know, I know, you’re thinking that I wax poetically about a lot of places and it’s true, I do. Travel excites me and I tend to get very enthusiastic about most places I visit, but Fogo is different and I’m not the only person to realize that. Checking into the Fogo Island Inn, the drive from the ferry terminal was eye opening. Passing gorgeous coastlines, cute little towns and even bizarre-looking modern architectural works of art, I was intrigued almost right away. Just as I expected, I was met warmly and kindly by the staff at the luxury hotel. But the hotel itself is integral to the modern story of Fogo Island, because it’s not just any luxury hotel. It’s actually an experiment in modern socio-economic theory. Trust me, this is more exciting than it sounds. 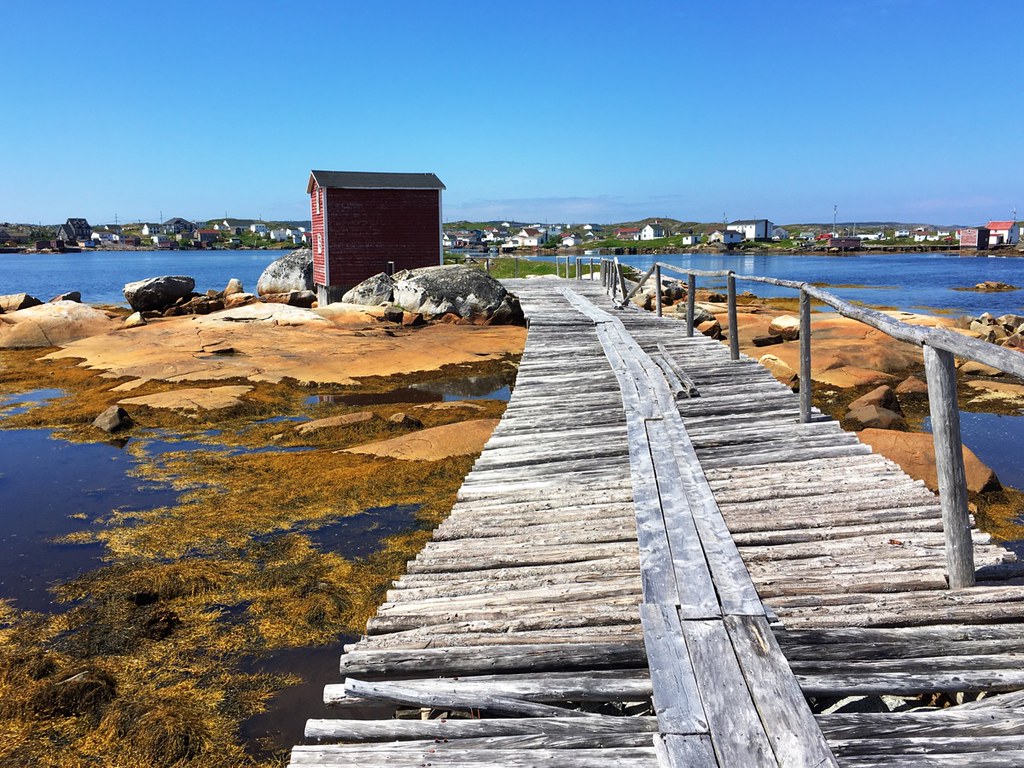 I met with the hotel’s Coordinator of Community Hosting, what I thought was a strange title until I realized its importance. Much like a more traditional concierge, she helped explain everything at the property, all of the amenities and the activities I had planned, including my first introduction, a tour with a community host. Truthfully, I had no idea what this meant, but I wanted to see more of the island and figured it was the best way. Nothing prepared me for the amazing afternoon I enjoyed with that guide, but I think I’m getting ahead of myself. Let me back up and explain what exactly is going on all around Fogo Island. 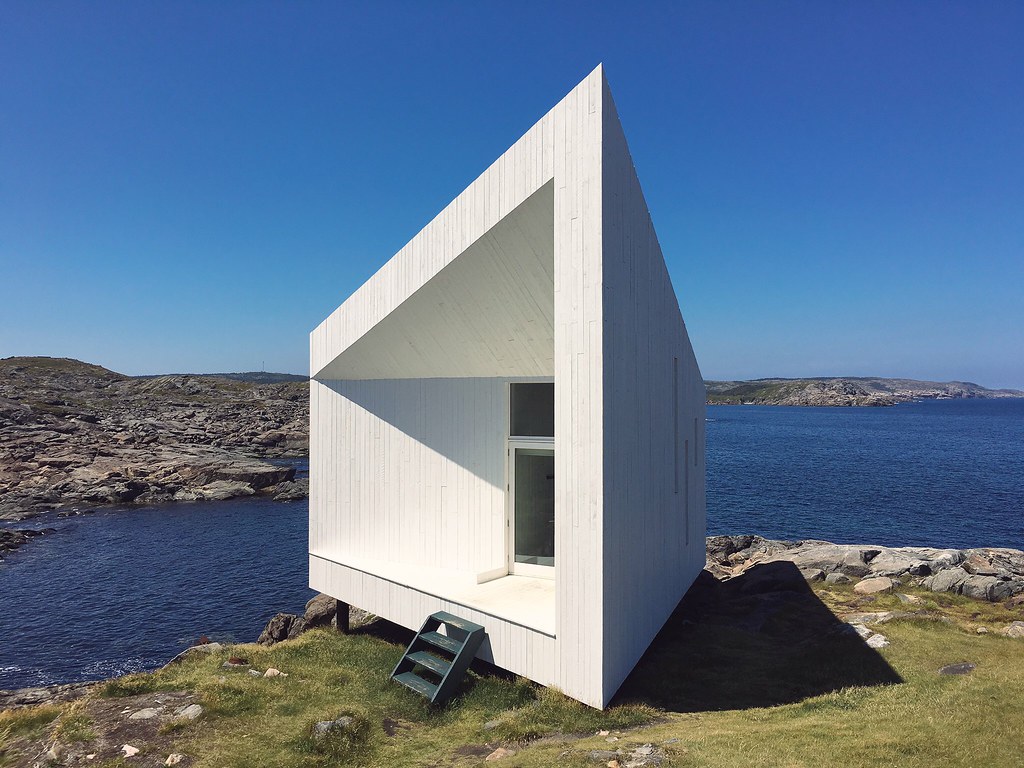 To understand Fogo Island, you have to understand what this little artist studio sitting all alone on the rocky shores really means. Zita Cobb grew up on the island, but spent many years Away (as Newfoundlanders would say) where she enjoyed a successful career. In 2001 though she decided to dedicate her life to philanthropic efforts back on her home island. Zita built the Fogo Island Inn, but the hotel is actually part of something much larger. Zita established the Shorefast Foundation, which believes that social engagement and the communities themselves can be nurtured and encouraged to stimulate local economies. There is an inherent value in any given place, but the key is finding and nurturing that value, the cultural heritage as it were. One way they’re working on that is through their artists-in-residence program. Building four wonderfully unique studios, artists from around the world apply to spend a few months on the island, creating new work and engaging with the local community. In a belief that the arts can have an amazing affect on a community, it seems that after only a few years that concept has been proven true. Zita’s main goal is to save her home island and other rural communities like it around the world. Rural places have value and this value can be reclaimed and made relevant for the 21st century. Instead of lamenting the loss of small towns and villages and the loss of a way of life, it is possible to not only halt that loss of cultural capital, but usher in a new age for these communities – a rebirth of hope, optimism and creativity. That’s ultimately the mission of the Fogo Island Inn and the artists-in-residence program and almost every resident on the island is part of this grand experiment. 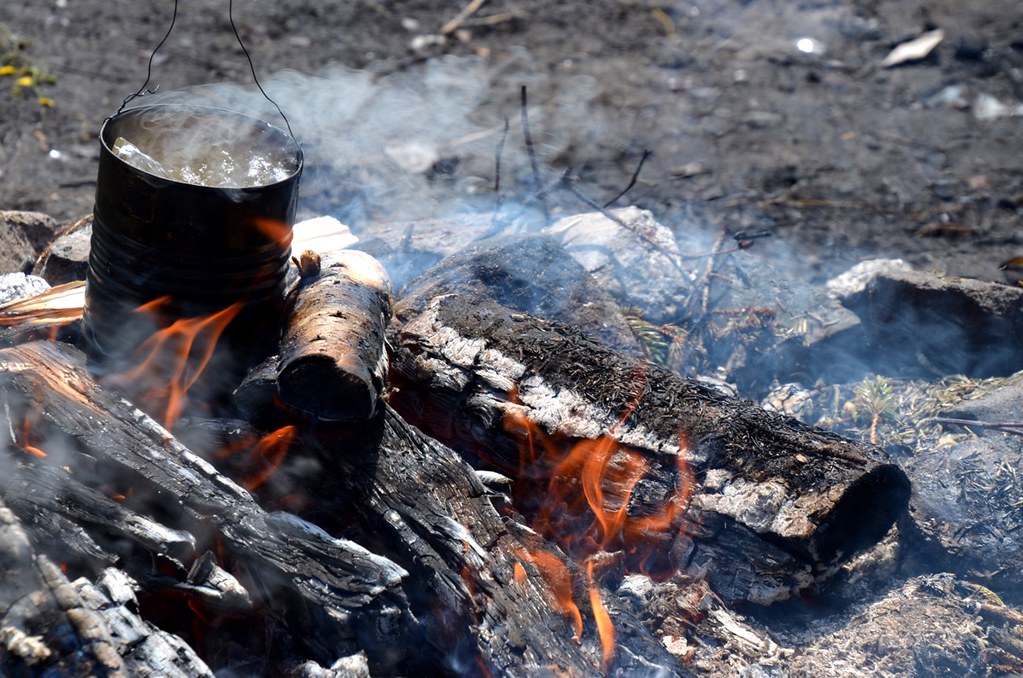 The Importance of Community When We Travel

The pot was boiling on the campfire, the sounds of kids playing in the small pond just a few feet away filled the air. I had my eyes on the blueberry jam that my community host for the afternoon had made the same morning. The bread? Oh that was also made earlier in the day by his neighbor who gave him a loaf. It was as un-fancy a picnic as you could imagine and yet had been coordinated by one of the top 50 hotels in the world. And I loved every second of it. My friend for the afternoon and I chatted, he said he had lived Away for years, returning only after Zita had started building the hotel. “I knew I wanted to be a part of this,” he went on to say, “I knew something special was happening here.” That wasn’t the first time I’d heard that, chatting with residents who both worked at the hotel or just within the communities, everyone seems to understand that something totally unique is happening, and the impact that has on the visitor is something truly extraordinary. 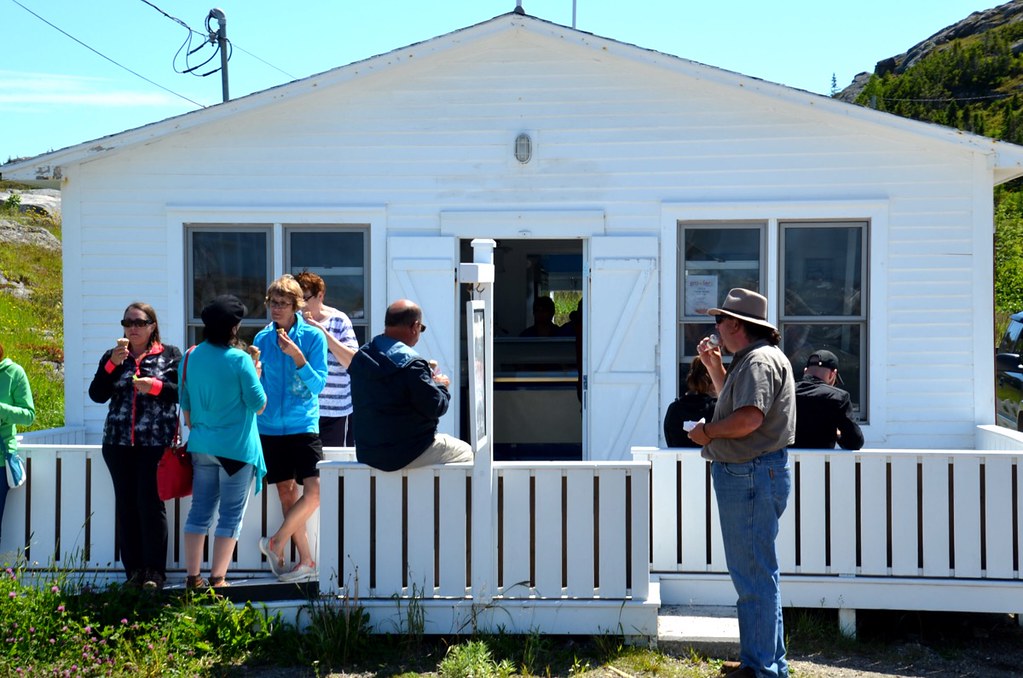 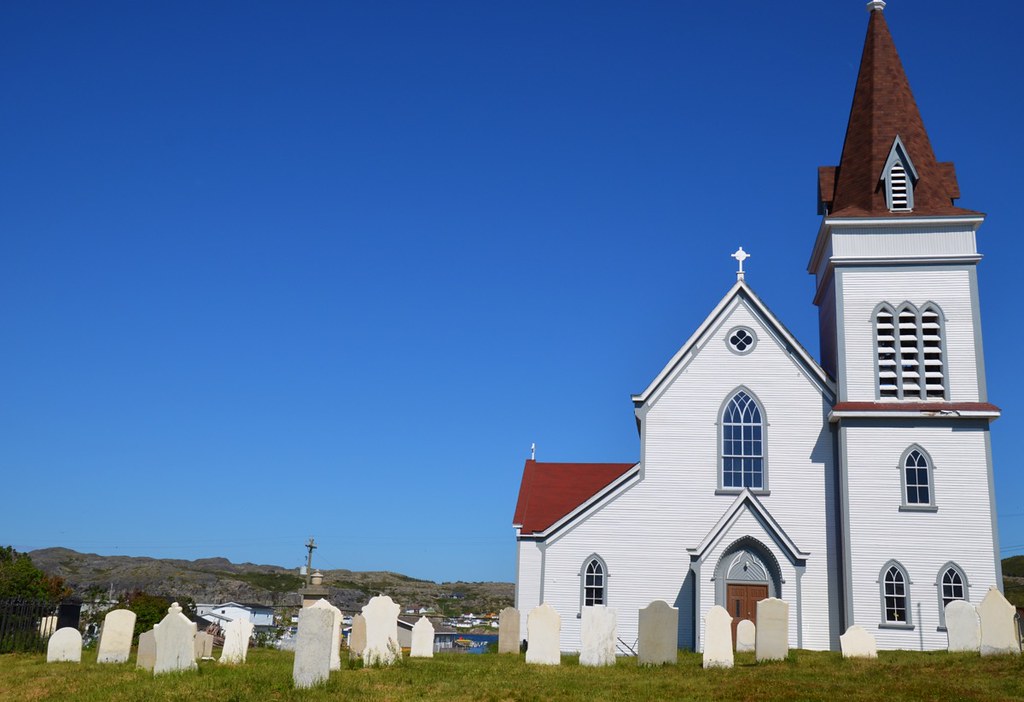 Instead of visiting a sterile hotel and having a cookie-cutter experience, the Fogo Island Inn is a little rough around the edges, but in the best ways possible. The Inn and the community are inextricably intertwined, the two fused in a sort of hospitality symbiosis that I certainly have never seen before and which may not exist anywhere else on the planet. That’s how I came to be adopted by the island during my stay, but that is the same experience every visitor enjoys. The residents of Fogo Island, whether they fully realize it or not, take every guest under their wings, guiding them around, showing the best of what it has to offer to anyone curious enough to ask. They’re watching as we explore on our own for the first time and are there to offer a kind word or just a simple wave. It’s a small place and word spreads fast which is how, just after a couple of days, I felt that stewardship. I felt that spirit of belonging and it transformed my experience at the Inn and on the island into something truly unique – almost spiritual. That must be what everyone has felt here, that must be why it’s so highly ranked among the vast pantheon of hotels and resorts in the world. Sure, the rooms are amazing, the service beyond repute and the food certainly worth of a star or two. But the luxury experience goes well beyond that, it goes to those community ties and is actually the first thing experienced by all guests, although few probably realize it. It happens when they first set eyes on the oddly beautiful design of the hotel itself. 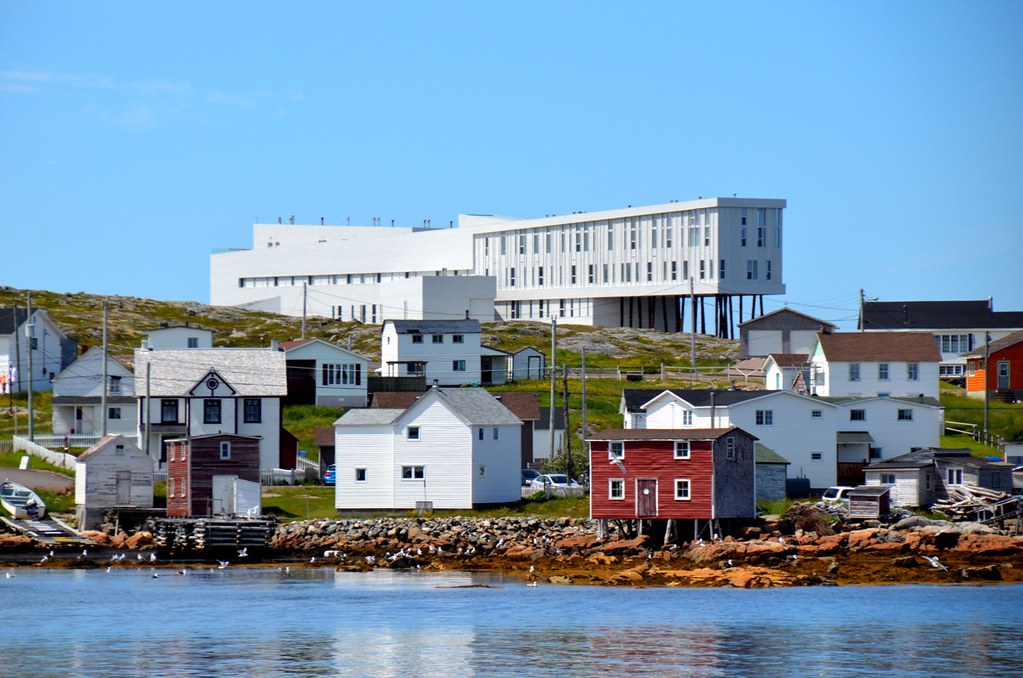 While at first glance the building may look totally foreign and alien, upon closer examination one realizes how very connected it is to the land and community surrounding it. The inspiration for the design came from the island’s old fishing houses, everything used to construct it was thought out well in advance and the furniture and accessories inside were nearly all made on the island, by locals and some newcomers all of whom wanted to be part of something special. Even the handmade rugs came from locals, one of which lovingly made by my host guide’s wife. The island is the hotel and vice versa and guests are thankfully allowed in to experience this marriage during their time there. That’s where the magic happens.

My first community guide, the one who so thoughtfully introduced me to the mysteries of Fogo said he and his wife are retired now and could easily live anywhere they wanted, especially St. John’s to be closer to their kids. But they haven’t left and they’re not going to leave. The island is home to them but more than that, thanks to Zita Cobb, the Inn and the artists who visit and share their works with residents, Fogo Island is no longer that once isolated spit of land in the North Atlantic. Today, Fogo Island reflects its true Portuguese name, it is an island on fire, a fire of creativity, of passion and drive and it doesn’t look like it’s going to be extinguished anytime soon.

4 thoughts on “Fogo Island: The Day I Was Adopted By A Canadian Island”