Whenever I travel, I try to document as much of my experience in real time using social media, especially Instagram. While I was a late-adopter to the platform, today it’s my favorite way to share images and stories from the places I visit. That was certainly the case last week when I road tripped around beautiful Newfoundland, Canada. I also realize that not everyone follows me on Instagram, although you really should, so I thought today I’d share the images from my most recent trip as well as amended versions of the stories I shared with them. For more, head over to my Instagram account.

Located near the capital city St. John’s is this gorgeous destination. Cape Spear is the easternmost point in all of North America and it’s this small but gorgeous spot that first welcomes the sun every morning. 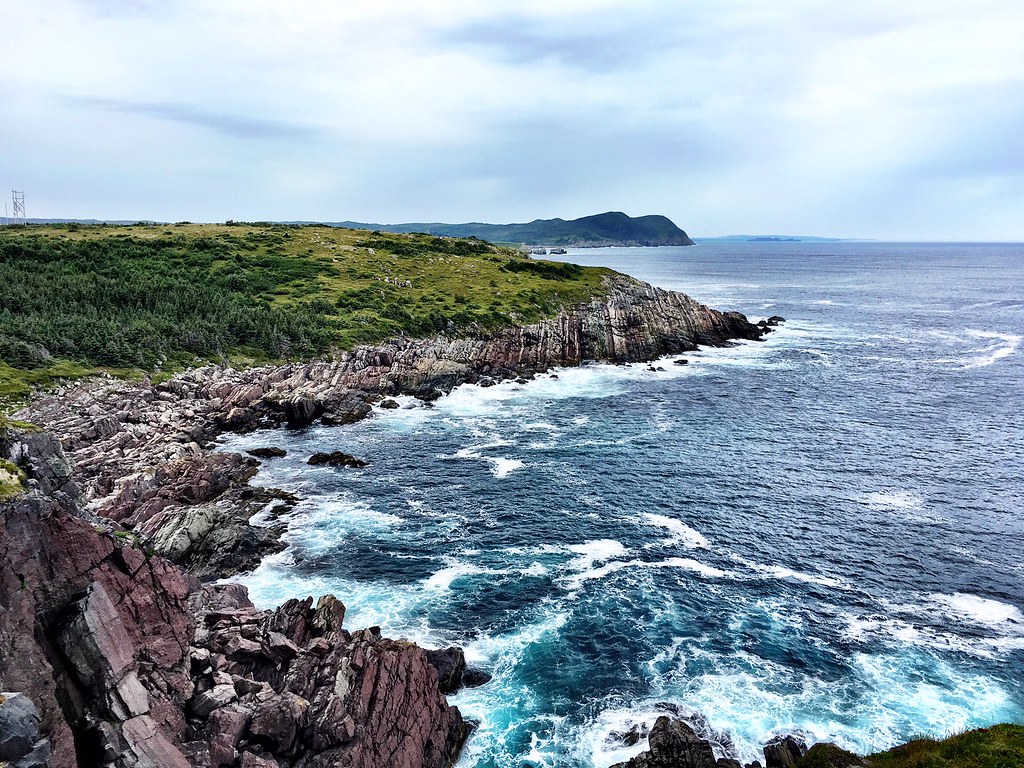 Throughout my time in the country I had to constantly remind myself that no, I was not in Ireland and that instead I was admiring the coastlines of Newfoundland and Labrador. That’s not where the similarities to the Emerald Isle end though, talk to anyone here and you’ll pick up on the lolling brogue I’m more used to hearing in Cork or Kilarney. An island at the far eastern edges of the continent, Newfoundland has been isolated for a very long time, the sea dictating life in every possible way. That isolation has preserved not only the accents from the Old Country, but also traditions and family histories. A huge place in a geographical sense, the sparse population and community feel make it a province where everyone seems to know everyone else and when they ask how you’re doing, they actually care.

One thing that surprised me about Newfoundland is its incredible age. People have lived here for a very long time and a good example of that history is the small fishing community located in Conception Bay – Brigus. Settled in 1612, a fact that amazes me, today people love coming here because it looks exactly what a postcard perfect fishing village should look like. It has the classic Newfoundland-style houses, lobster pots are sitting by the water and funky little shops and restaurants are everywhere. Of course it’s just one of many though. Little communities dot the province and from my point of view they are a big part of what makes taking a road trip here so much fun.

Ever since I first saw a photo of this remarkable hotel I knew I had to stay here and on my trip to Newfoundland I was fortunate enough to spend a weekend here. One of the most unusual and unique hotels in the world, the Fogo Island Inn is also one of the top rated; the combination of the physical space, amazing architecture and stellar service helping its rise to the top. The island and this Inn have many stories to tell, and spending the day with a local resident as he drove me around showing off his favorite spots was just the first step in learning more. But I think we have to start at the beginning, and that’s with the unusual look of the property that brought me here in the first place. The original settlers to islands like Fogo never were expected to live here forever; they were here to fish and that’s it. So wooden temporary structures were the norm, resting lightly on the landscape by using stilt wooden legs called shores. It’s this rich tradition on which the hotel is built, both literally and figuratively. Everything about this place was thought out meticulously with an eye on sustainability but also honoring the past. 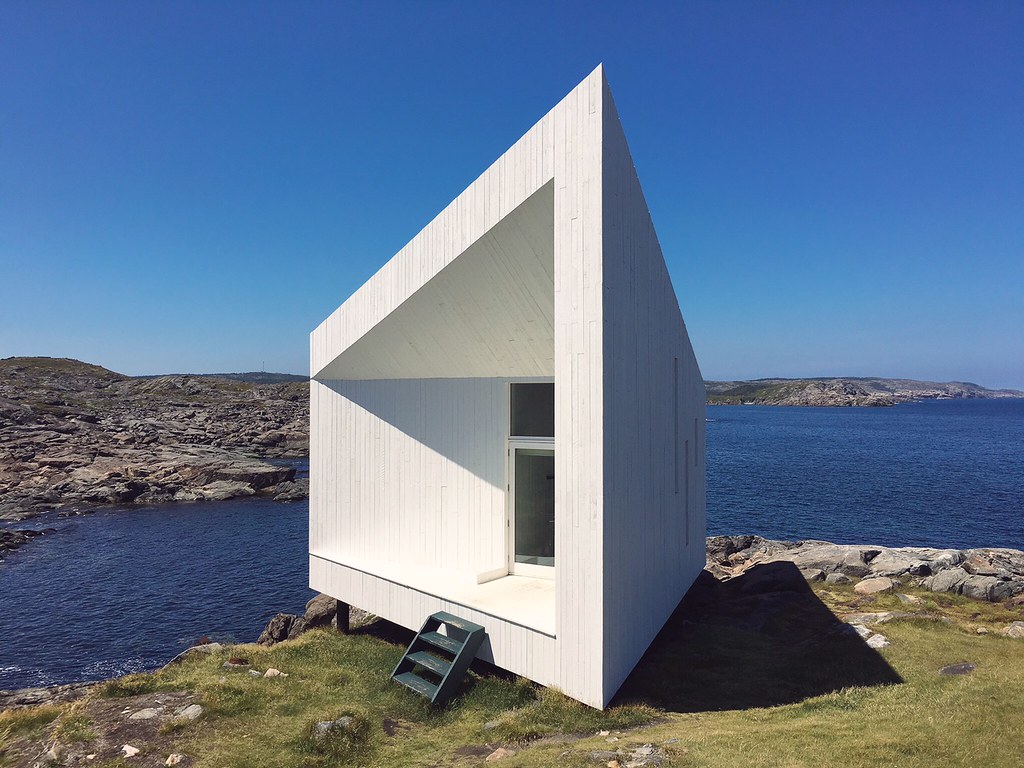 To understand Fogo Island, you have to understand what this little artist studio sitting all alone on the rocky shores really means. Zita Cobb grew up on the island, but spent many years Away (as Newfoundlanders would say) where she enjoyed a successful career. In 2001 though she decided to dedicate her life to philanthropic efforts back on her home island. Zita built the Fogo Island Inn, but the hotel is actually part of something much larger. Zita’s Shorefast Foundation believes that social engagement and the communities themselves can be nurtured and encouraged to stimulate local economies. There is an inherent value in any given place, but the key is finding and nurturing that value, the cultural heritage as it were. One way they’re working on that is through their artists-in-residence program. Building 4 wonderfully unique studios, artists from around the world apply to spend a few months on the island, creating new work and engaging with the local community. In a belief that the arts can have an amazing affect on a community, it seems that after only a few years that concept has been proven true.  Zita’s main goal is to save her home island and other rural communities like it around the world. Rural places have value and this value can be reclaimed and made relevant for the 21st century. Instead of lamenting the loss of small towns and villages and the loss of a way of life, it is possible to not only halt that loss of cultural capital, but usher in a new age for these communities – a rebirth of hope, optimism and creativity. I love all of these messages and in particular, I love how the arts are leading this economic change on Fogo. It’s not just a nice idea either, just take a quick look around and you’ll see instantly not a dying series of communities, but a populace that is excited for what the future holds.

Of course Fogo Island is about much more than cutting edge architecture and the arts. It’s a very traditional place with distinct cultures that have changed little in the past few hundred years. To see more and learn about this impressive history I joined a local boat cruise, the highlight of which was stopping at Little Fogo Island. An island off an island off an island on the far edges of the continent, this is as remote and beautiful a place as I’ve ever seen. At one time hundreds called this small green rock home, there’s even a 19th century church lovingly maintained. The cabins built here are just as old, although no one lives on the island full time anymore. The homes are still passed down through the families and are usually places to spend the night and relax on a nice summer evening with nothing around except some puffins and the crash of the sea. It’s a special place, one with a spirit and being there was an unexpectedly important moment of introspection. As much as we think we know and for all the research we do, important travel experiences like this one are always a surprise and is just part of what makes the journey so very worthwhile.

My last evening at the incomparable Fogo Island Inn was spent like many of my fellow guests. I put on a nice shirt and relaxed into my chair in the light and bright dining room, enjoying amazing views of the sea as the sun startled to crawl beneath the waves. The sun sets late during the summer months up in Newfoundland, which turned out to be a stroke of luck for me. After dinner I was walking back to my room, ready to enjoy a few final moments in one of the best rooms I’ve ever enjoyed when I noticed the skies outside. The evening had erupted in fiery shades of red, orange and purple and the clouds only augmented the effect, making it seem like one of those doctored photos that so many times make the rounds on Instagram. So I grabbed my camera and phone, ran outside and captured this image. While my time on Fogo Island was certainly more than just about one image or even one moment, at the heart of the experience for me necessarily was my time at the Inn. Instantly I understood why everyone raves about it and why, after only a few years of operation, it’s one of the best in the world. It’s about so much more than nice beds or expensive touches, it’s about the spirit there and the service. It sounds trite, but guests really do feel like a part of the community, even if just for a few days. This is so rare and special when we travel that when it does occur, it’s like capturing lightning in a bottle. That’s what the Fogo Island Inn experience is all about to me.

Newfoundland and Labrador is a province full of storytellers, and nowhere will you hear better stories than in the many small communities that dot the coastline of this massive province. My last day in Newfoundland was spent visiting a smattering of these so-called outports, towns and villages that today are mere shadows of their former glory. One of my favorites was Greenspond, a town of just about 300 people today but at one point was one of the most important towns in the entire province. Like every other town in Newfoundland and Labrador, life in Greenspond revolved (and still does) around the sea, fishing cod and then participating in the yearly seal hunt dictated the ebbs and flows of daily affairs. Its position along the major sea trading routes made it a commercial center in the 18th and 19th centuries, a vibrant community that was once known as the Capital of the North. I first saw this link to the past when I stopped at a lookout high above town, a sign honoring former ship captains adorning the site. Newfoundland was essentially founded for one reason, fishing and the bounty of the sea dictated life in this and every other community dotting the beautiful coastline. Today fishing is still at the center of life, but thanks to its relative isolation the town has preserved the unique look and feel of a traditional Newfoundland community that I came to know and love during my time there.