I’m not sure when I first learned of the natural wonder The Giant’s Causeway in Northern Ireland. I was probably a young kid, but what I do know is that ever since I first read about it it’s been something I’ve desperately wanted to see in person. Each time I saw someone share a photo of this incredible natural monument, I yearned to be there, to be walking amongst the basalt columns and to experience it for myself. A few months ago I drove along the Causeway Coastal Route in Northern Ireland, a drive that features many beautiful towns and gorgeous sights, including the star of the route – the Giant’s Causeway. Visiting the Causeway is an experience, and a popular one at that, so I thought I’d share a few things I think everyone should know about the mighty Giant’s Causeway.

Getting there is part of the fun

Driving trips are a lot of fun. I really enjoy the freedom of going anywhere I choose, stopping when I feel like it and exploring at my own pace. Not all road trips are made the same though, but there are a few that have percolated to the top of my list and the Causeway Coastal Route is definitely one of them. Starting in Derry and ending in Belfast, Northern Ireland, the Causeway Coastal Route is a 120-mile drive that connects dozens of small coastal villages and attractions, including several smaller routes connecting inland sites to the main drive. It also takes much more than the 1-day I had to devote to it. I started early, ended late and raced along the way and was not able to even scratch the proverbial surface. Honestly, if you have a week to spend driving this impossibly stunning route, take it. Go slow, stop at everything and enjoy the almost otherworldly beauty you discover along the way. Some of the many highlights include beautiful beachside towns like Portstewart and Portrush, Ballintoy Village, the hair-raising rope bridge at Carrick-a-Rede and of course, the Giant’s Causeway itself. 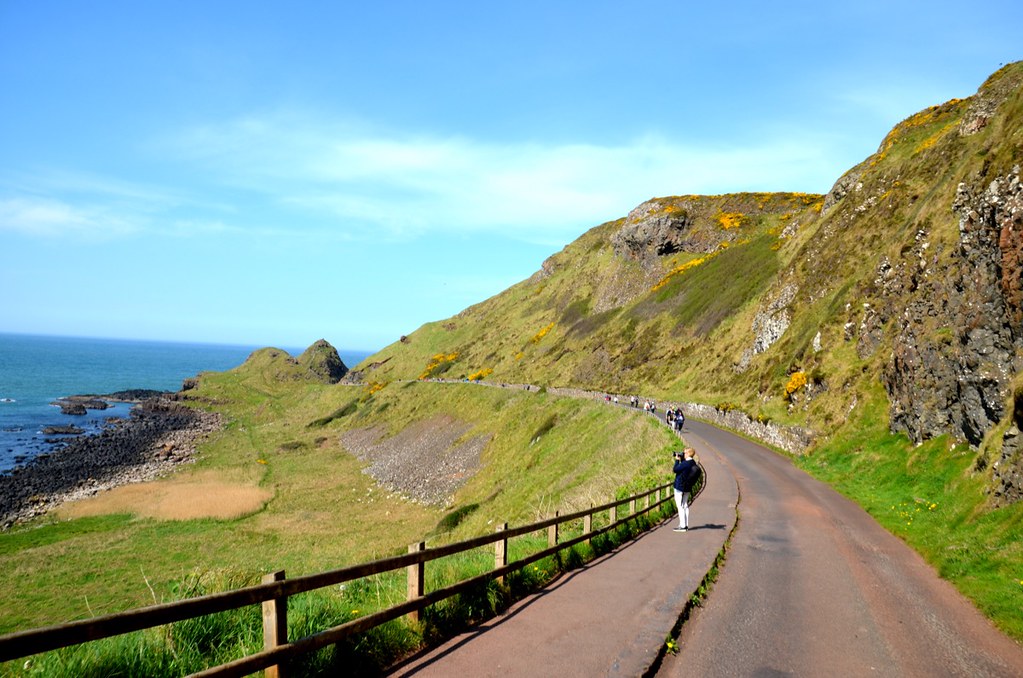 What to do once you get there

I’m not great with directions, be they driving or otherwise, and I was a little confused as I approached the National Trust run Giant’s Causeway. In towns immediately before there are signs for parking and buses to the site, I imagine necessary in the summer rush. It was late spring when I visited though and deciding to throw caution to the wind, I drove directly to the site and had no problems parking. There is a process though. I think that parking is included with your admission fee, although nowhere is that made entirely clear and no one asked to see my ticket when I left. So just park, go in and pay for your ticket and enjoy your day at the wonder. But there’s a lot more to see and do than just a few basalt columns. 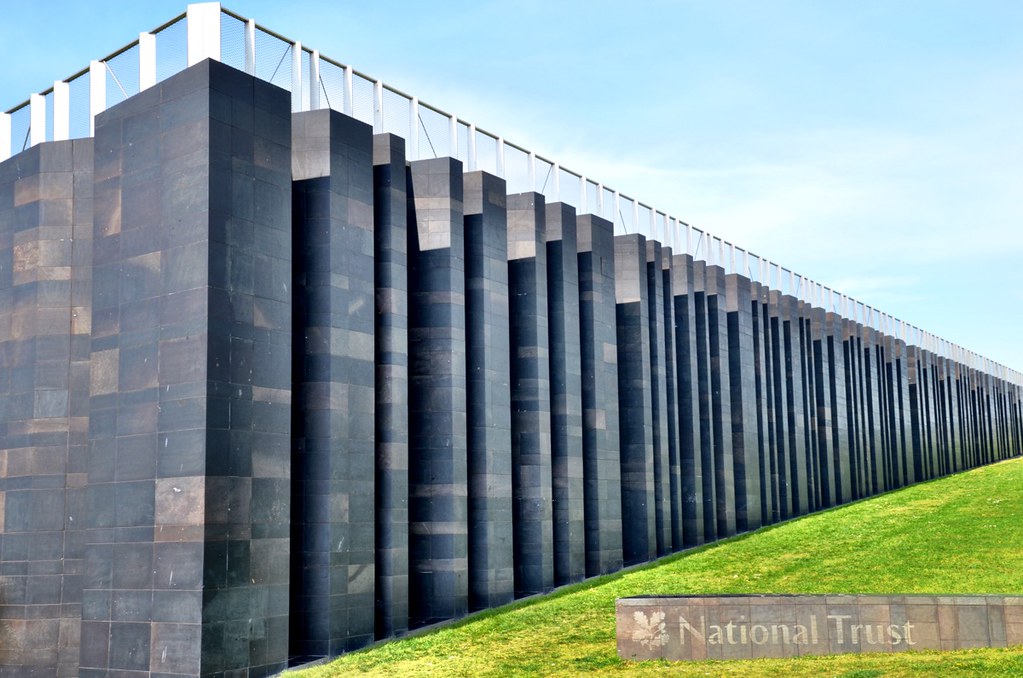 In the main center there are interactive displays for all ages, but especially great for kids who want to learn more about the legends, history and geology behind the site. Complimentary audio-guides are also available for visitors whether or not you decide to walk down to the Causeway or take the bus. That’s right, it’s about a 15-20 minute walk down to the Giant’s Causeway from the Visitor Center itself, but it’s not a hard walk and the scenery along the way is a big part of the experience. I decided to walk down but pay the £1 for the tram back up, a popular choice based on how busy the buses were. But what is it everyone is there to see? 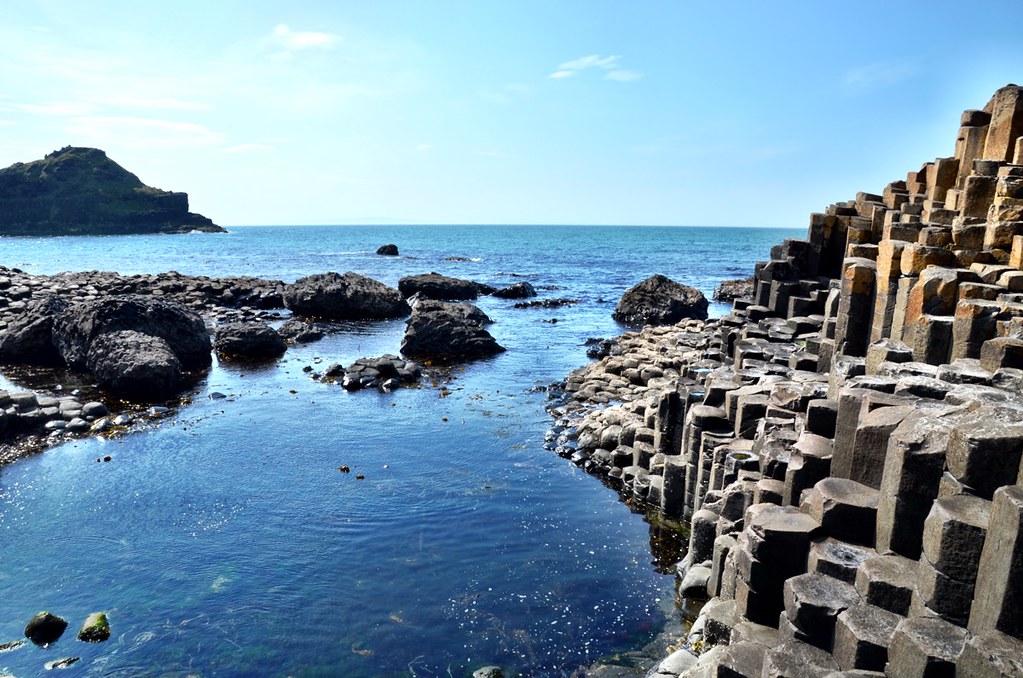 What is it exactly?

As much as I don’t like hard science, a little of it is necessary to explain what the Giant’s Causeway is exactly. This geological phenomenon is basalt, solidified lava from a flow that filled a river valley. It cooled and cracked, but the cracks went through the depth of the flow creating the columns we see today. The Causeway lava cooled and shrank, splitting apart to create a pavement-like surface and tall columns, most of which have 5 sides. That’s the science of it, the legends though are must more interesting.

Finn MacCool is a common name in ancient Irish legends, and he’s also the personality behind the tales surrounding this strange landscape. Legend has it that he challenged a rival giant in Scotland and built enormous stepping-stones across the sea so that the two could meet. Finn though had second thoughts, and hid from the Scottish giant who was tricked into thinking that Finn was much larger than he really was. Frightened, the Scottish giant fled, destroying the stepping-stones in the process, leaving only the remnants in Northern Ireland and a similar set of columns on the Scottish island of Staffa. The legends and tales have been so important throughout Irish history, that many place-names throughout the country take their basis from Finn. The legends are fun stories, but there’s no doubt that there’s some magic in the Causeway, as I learned spending the afternoon climbing over these beautiful rocks. 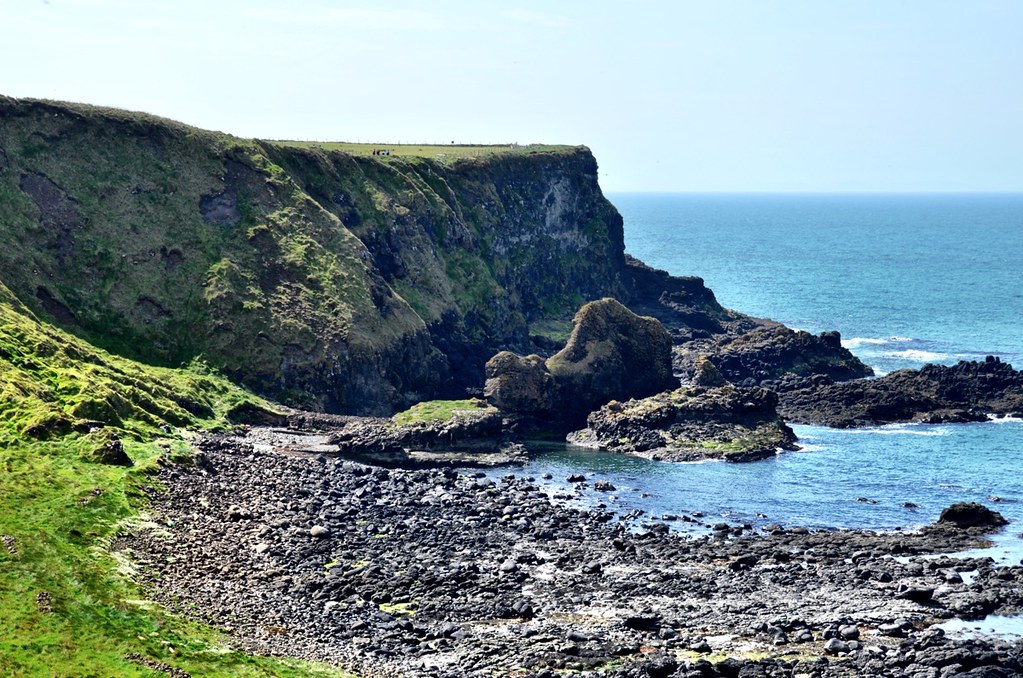 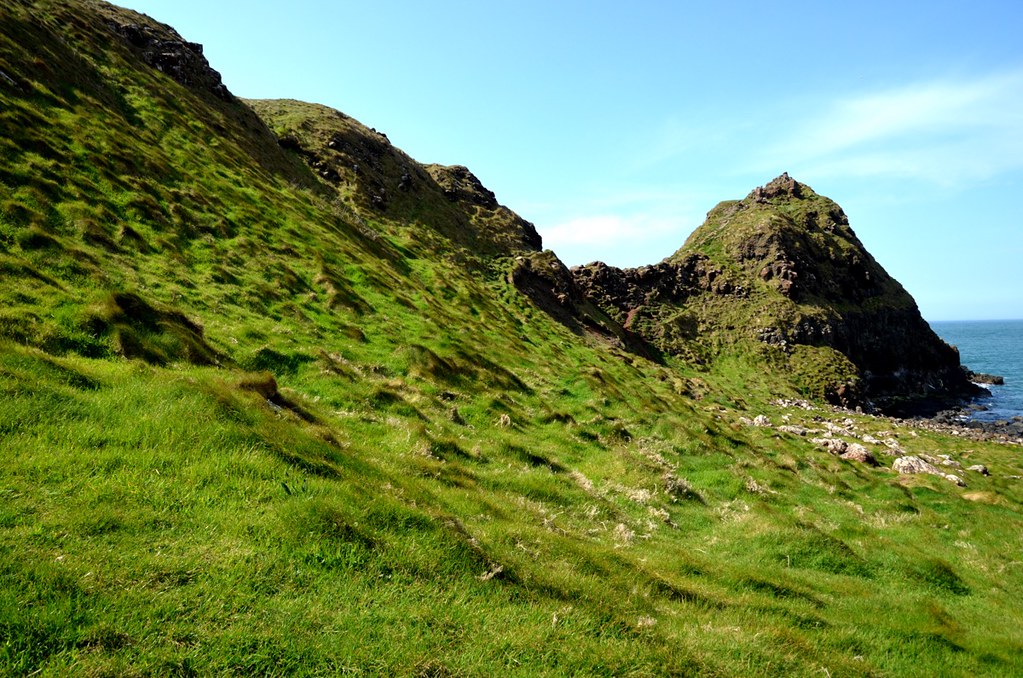 I didn’t visit the Giant’s Causeway the way it should be appreciated. Starting my day in Derry, I had to be in Belfast by nightfall and with everything to see and do in between, time was a luxury in short supply. I mentioned it at the beginning of this post, but the Causeway Route deserves time and lots of it. It’s beautiful, it’s interesting and the star of the drive, the Causeway itself, really needs a half-day or more to appreciate. I imagine its beauty changes gradually over the course of a day, the light changing the landmark in any number of ways. Sauntering down the scenic path to the basalt columns, I couldn’t believe the beauty that surrounded me. Ireland really is a gorgeous place, and its true beauty is found along the impossibly green coasts. With landmark names like The Camel’s Back, Port Ganny, Weir’s Snout and the Giant’s Boot, you can imagine how folklore came alive along these beaches. Even at the time I knew it was one of those places which no camera or photographer can ever hope to truly capture, the true joy is just being there and enjoying it in person. 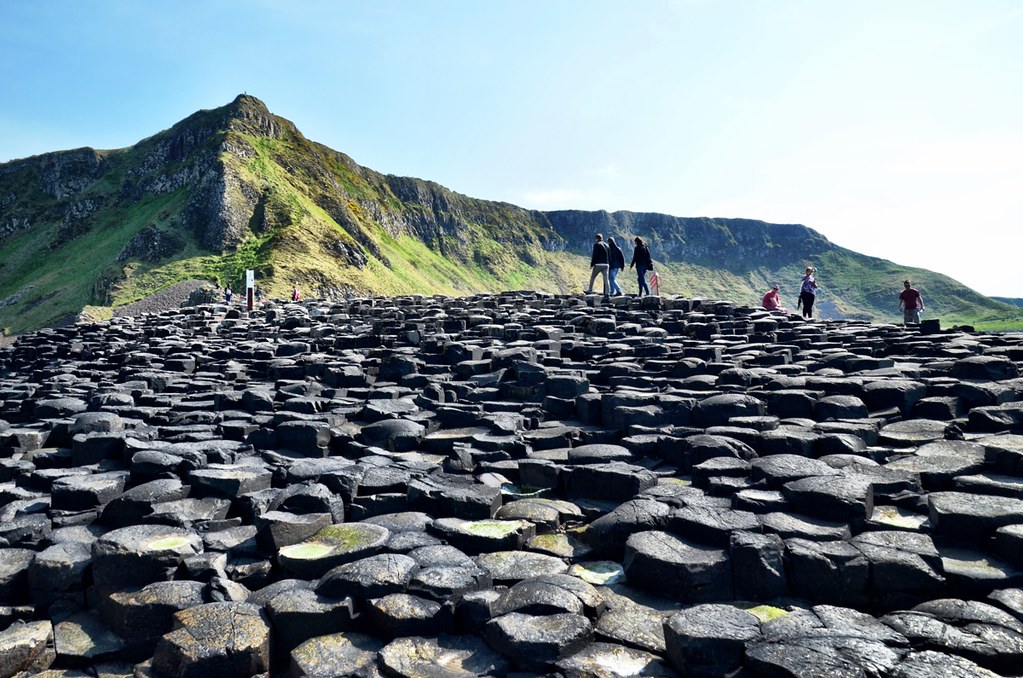 So after decades of wanderlusting, was it all worth it? Most definitely. Nothing I had ever seen of the Giant’s Causeway prepared me for the beauty of the experience. I think I may have enjoyed the process of walking down to the columns almost as much as the natural wonder itself. But as soon as I caught sight of the first geometrically perfect column, I understood what all the fuss was about. It seems so strange, so out of place to see these perfectly created columns amidst the rough and tumble Irish coast, and yet there they are, dumbfounding visitors for centuries. Although it was busy when I visited, that didn’t detract from the fun of the experience itself, clambering over the rocks and columns really made me feel like a kid again. After I’d explored all I could, I sat down for a moment and looked out across the sea. It was an unusually beautiful day and the views were also unusually stunning, which is saying something for the Northern Irish Coast. Although I had only barely begun the Causeway driving route, I got it, I understood then and there what made it all so special. It was for unique moments like that one, connecting with the landscape in a way that rarely happens but when it does, you know that something special has happened, a sort of travel magic that is hard to come by but treasured once discovered.