One concept that was hard for me to grasp when I first started visiting Europe during the Christmas holiday season was just how many Christmas markets there really are. Sure, many of the big ones are well known to us all, but most cities and towns also have their own versions, usually small but no less fun. Over five years or so I’ve had the chance to visit many different areas of Europe around the holidays, from Paris to Northern Italy and everywhere in between and along the way I have discovered a tremendous diversity in markets, styles, foods and customs. Looking back today, I thought I’d share just some of the many Christmas market experiences I’ve enjoyed, cities and towns that take Christmas a little more seriously than some others.

Like most large cities, Budapest has several Christmas markets but the centrally located one in Vörösmarty Square is the largest and most well known. In comparison with other markets, I was most surprised to see such a wide variety of savory food options. Stalls offered everything from traditional goulash to sausages and even strange concoctions involving rooster parts. When it comes to dessert though there’s only one real option – the so-called chimney cake. Originally from Transylvania, the kürtöskalács – Hungarian specialty yeast cakes – are cooked on a spit over red hot coals and then doused in icing to give it a unique but delicious taste. Served up in still steaming towers of cakey brilliance, there’s nothing better on a cold December night.

Home to what is arguably the most famous Christmas market in the world, it’s also one of the busiest with more than 2 million people visiting every year. What makes this market so special is the keen attention to detail. Officials forbid any modern items to be sold – all crafts and even foods must be traditional. Thanks to those rules, the Nuremberg Christmas Market is the prototypical Christmas market against which all others are judged. Although it was packed with people when I visited, I still had plenty of opportunities to enjoy the famous Nuremberg sausage sandwiches along with a glass of glühwein to wash it down. One of the most popular desserts and gifts is the city’s Lebkuchen or gingerbread, available in all shapes and sizes. While not as intimate as some other Christmas markets, a visit to the massive one in Nuremberg should be on everyone’s travel bucket list.

The very first Christmas market in Europe I ever visited, the Winter Wonders Festival in Brussels will always have a special place in my heart not only for that reason, but because it’s just so much fun. This large festival consumes much of the city center, tents and stalls flowing out into side streets and public spaces along the way. At the heart of the experience is the Grand Place, where a massive Christmas tree takes center place and for the last several years, a special light show is held every night. Strolling along the always-busy stalls of the festival, you’ll find everything here from traditional foods and drinks to more modern fare. It’s also just a lot of fun, with kids ice-skating and adults sitting close by, listening to local musicians liven up the evenings.

I expected a lot from Cologne’s Christmas markets, and they certainly delivered. One of the most popular tourist towns in Germany no matter what time of year, at Christmas droves of people descend on the city to visit the many markets found around town. The most noticeable market is centrally located right in front of the massive Cathedral or Dom for which Cologne is most famous. But there are many more throughout town, from the Medieval themed market with staff dressed in period costume, to the market found along the banks of the Rhine. No matter which one you visit, be sure to eat plenty of treats like the handbrot sandwiches or the delicious meats grilled right in front of hungry guests. My favorite foodie discover though was reibekuchen. They’re delicious snacks or even small meals, but also very simple. These potato pancakes are deep fried potato fritters served with a variety of toppings, from applesauce to cheese. They’re usually served in bunches of three and are more than enough for a complete meal. They are also intensely popular, at least based on the markets I visited and for many folks seem to be one of the food staples of the Christmas market experience. 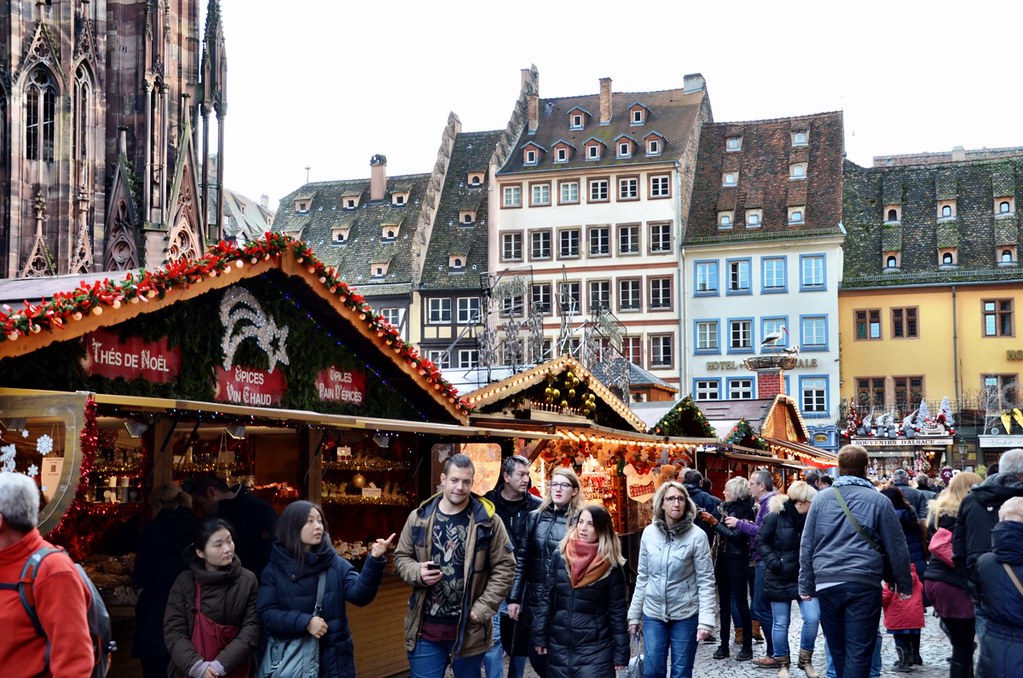 This large city in the heart of Alsace was a great introduction not only to this fascinating region, but also to French Christmas market traditions. The Alsace region has a troubled history, ping-ponging between French and German possession over the years, you’ll find a strong influence from both cultures all around town. This unique background necessarily affects the food and in the markets I discovered everything from foie gras sandwiches to traditional beignets.There’s not just one Christmas market in Strasbourg though, there are many strewn all around, which makes an exploration of the downtown area fun and filled with yuletide surprises almost anywhere you go. Every region has their own culinary specialties and while Strasbourg has many, it’s well known for its collective love of pretzels. You’ll find them in every size and shape and even lunch versions, topped with far-too-generous amounts of cheese.

As luck would have it, last year we arrived into The Netherlands a few days before our Viking River cruise along the Rhine at the same time when the largest Christmas Market in the Netherlands was getting underway. Located in the city of Dordrecht, I thought I’d seen large markets before, but nothing prepared me for the Dordrecht market. Right away I knew that the statistics were right, the Dordrecht Christmas market is indeed huge, encompassing most of the downtown overflowing onto streets and alleyways in every direction. It’s almost too much to take in at once, but spending a few hours walking around, trying new delicacies and listening to Christmas carols, I found myself not only enjoying the market, but enjoying the city much more. Even though I didn’t know it at the time, Dordrecht is the oldest city in the Holland region and its rich culture and history really does tell the story of The Netherlands. Enjoying a strategic location, it became important early on, trading created wealth that can still be seen today. Important moments also took place here, from the first step towards a free and independent Dutch Republic to religious reform in the 17th century. While its importance has certainly waned since the heyday of the Middle Ages, the architecture and culture are all great clues to this lofty past, making it a beautiful city to explore whether or not the Christmas market is around.

The Viennese embrace the Christmas season in a way few other cities manage. There are dozens of Christmas markets all over the city, and the major shopping districts are lit up at night in a dazzling array of special displays and lights. The major market in Vienna though is located at the massive Rathaus. When I visited, the trees surrounding the market were festooned with hundreds of lighted displays, a real life advent calendar all leading to the market itself. One of the busiest in Europe, this market had a nice mix of food and gifts, with lots of delicious pastries made only during the Christmas holidays. While the gifts were ok, the food was the clear winner at this market and my personal favorites were the freshly made desserts, everything from fudges and brownies to special apple doughnuts.