In 1948, the first commercially viable instant camera was sold to the public, the Polaroid Land Camera Model 95 developed by camera pioneer Edwin Land. A new era in mobile and personal photography was created and over the coming decades, millions would strap the fun, if not a little bulky, Polaroid instant camera around their necks and head out to see the world. I was one of them. I had a Polaroid camera as a kid that, along with a Kodak Brownie camera, was the foundation of my early entrance into the world of photography. But then the unthinkable happened, in the first decade of the 21st century Polaroid went bankrupt and production of that oh-so-famous product ceased, along with the supplies that kept the older versions running.

The public outcry was almost immediate and since then the company has been resurrected under new owners with new ideas, competing fairly well (it seems) against the world of digital cameras. Polaroid cameras have also become trendy and beloved by hipsters everywhere, but the Polaroid Photo Tour I joined in Vienna wasn’t interested in the new gear, for the owners of PolaWalk it’s old school equipment or nothing.

I love finding new ways to explore cities and when I found out that Vienna offers one of the most unique photo tours in the world, I couldn’t wait. Since 2013, the owners of PolaWalk have been leading visitors around Vienna, as well as Warsaw and Graz, with vintage Polaroid camera, letting them see these cities in entirely new ways. It’s quirky, it’s fun and was a lot more challenging than I ever imagined.

(Throughout this post I have included photos comparing the Polaroid photos with the same shots I took with my Nikon D5100 DSLR camera, it’s fun I think to see the differences.) 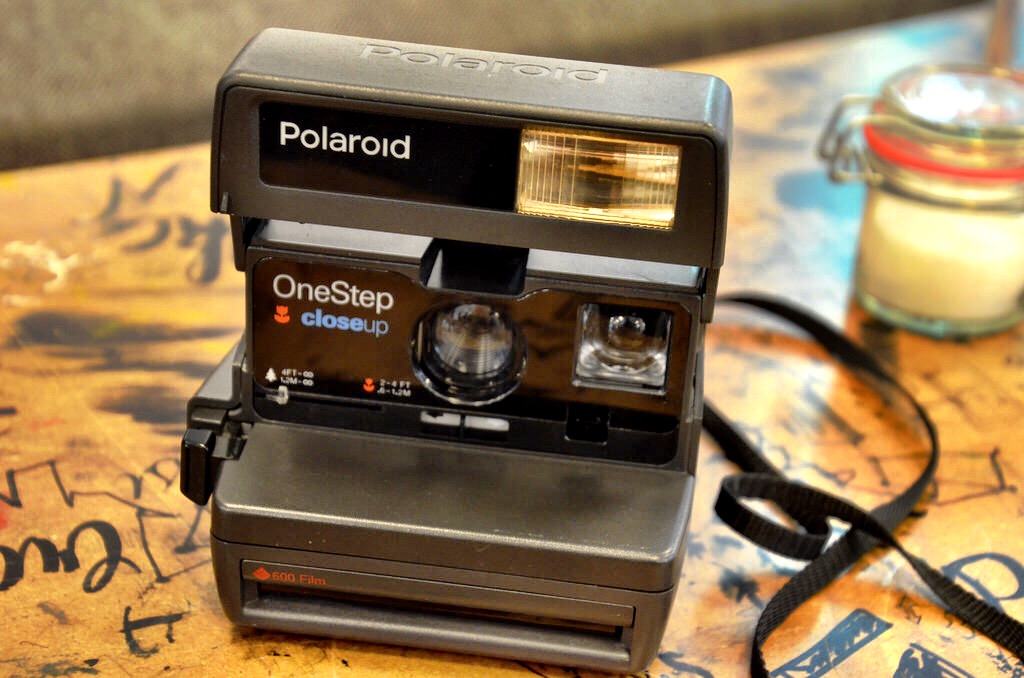 Before any of the participants were allowed to start shooting, some basics had to first be learned. Picking up the slightly bulky vintage camera (it feels odd to call something from the ‘80s or ‘90s vintage) I found myself forgetting how to use it almost completely. That’s why one of the company’s owners, Thomas, includes a brief workshop before any tour to make sure guests know how to use these mobile instant photography studios. It was fun, sitting there and remembering what it was like first picking up one of these important cameras as a kid. My first Polaroid gave me freedom, freedom to shoot anything I wanted and not have to wait a week or more for the photos to be developed. It’s the sort of freedom that kids today will never fully understand or appreciate, except on one of these tours of course.

You may be wondering about the film, which is a good point. When Polaroid went out of business in 2008 that also meant it ceased production of the necessary film for the millions of cameras still in the hands of people around the world. When the Polaroid plant in the Netherlands closed its doors for good, two innovators bought the equipment and rights to ensure that the brand would never die and formed a new company in the process. The Impossible Project is a company founded on the concept of making sure Polaroid never dies. Since then, the company has been producing film for all of those model types floating around the world still today, an important link to these timeless machines.

The walk itself though was what I was most excited about. PolaWalk offers several different tours of Vienna from the classic to the more avant garde. That afternoon, the tour included both the famous Prater Park as well as some more urban elements of the city. The idea was to see a different side of Vienna apart from the palaces and museums and to understand it through up and coming neighborhoods, all witnessed through the oddly inaccurate viewfinder of the Polaroid camera. 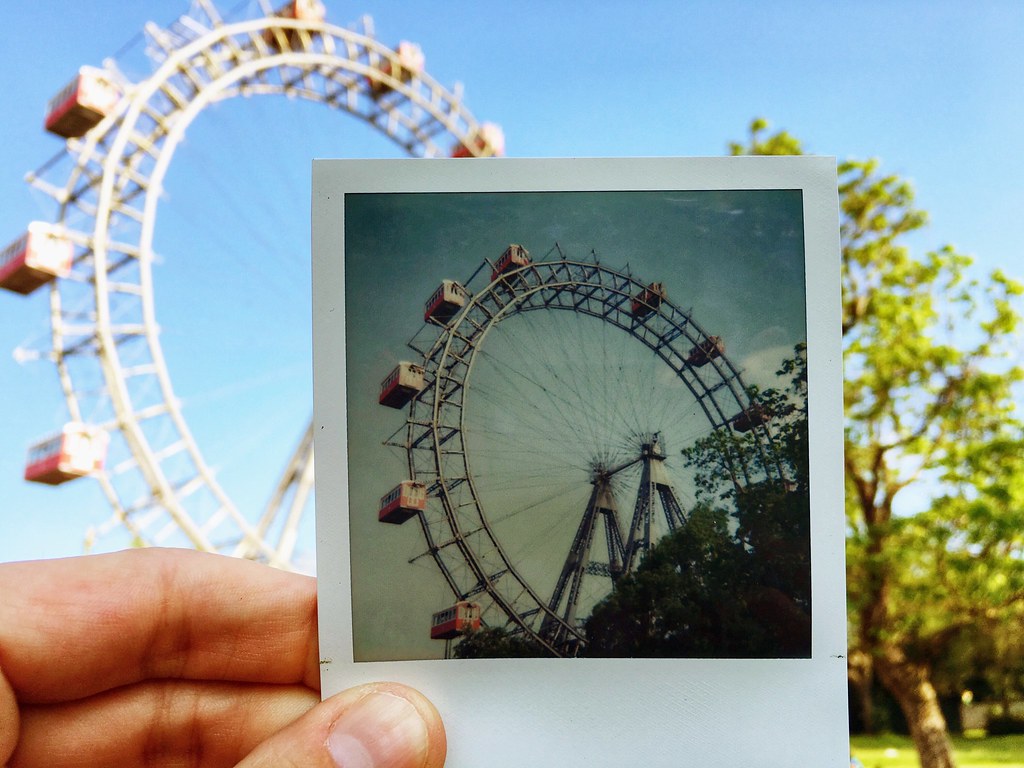 I didn’t realize the effect that digital cameras had on the way I shoot photos until I held that Polaroid camera in my hands. The little number counter on the back told me that I only had 8 photos for the entire afternoon – 8! I take eight photos before I even leave the hotel when I’m traveling. I didn’t know how I would make it work, but almost immediately the way I considered the shots I took changed completely, at least for that afternoon.

Walking around the massive Prater amusement park on a beautiful summer day with three cameras strapped to me was an odd experience. My digital cameras got a fair workout, no doubt there, but after almost 20 minutes I had yet to even touch the Polaroid. I was waiting, mentally summing up what I thought I wanted to capture on that oh so precious film. A shot list started to form in my brain, and I thought I knew how I wanted to use the Polaroid and its film in a way that would be meaningful to me.

Ultimately, that’s what PolaWalk is all about, providing their guests with an experience that is unique, but one that also provides tangible souvenirs from the trip, a piece of their memories to share with friends and family. No, not on a phone or on social media, but something you can actually touch and feel, you know like in olden times. I loved every second of the walk experience and more importantly, the mental exercise in framing those shots was just as much fun.

(Throughout this post I have included photos comparing the Polaroid photos with the same shots I took with my Nikon D5100 DSLR camera, it’s fun I think to see the differences.) 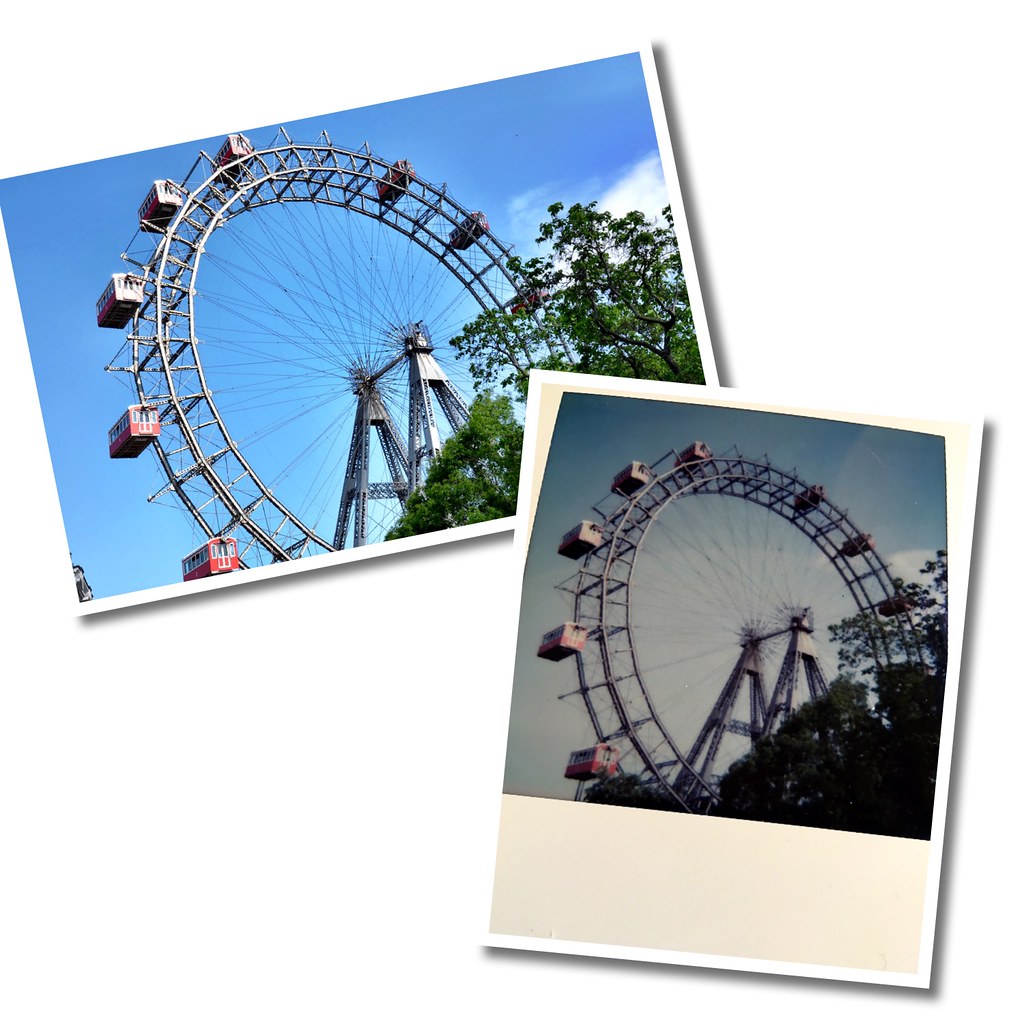 I did indeed feel like a kid again after I took my first shot of the famous Prater Ferris Wheel, carefully removing the film to protect it from the sunlight, and stowing it eagerly awaiting for it to develop. I had forgotten that the concept of “instant” was different during the heyday of the Polaroid and with these vintage cameras, that means waiting 30-60 minutes before the final product is ready to view. In between development times, the group wandered the width and breadth of the Prater, getting lost in the crowds in a park that has a centuries-old tradition in Vienna.

I had never before visited this famous park, nor had I been to some of the more urban areas of Vienna; neighborhoods that are lovingly called up-and-coming. They had their own urban beauty, festooned with street art and pop-up cafes there to take advantage of the early summer weather. The night was perfect, the weather fine and all of Vienna was outside to enjoy being out of doors with friends and family. I tried as best I could to capture it on the Polaroid, quickly learning that the viewfinder is more of a nice idea than exact instrument, but laughing at those early photographic mistakes all the same. I looked down again and saw that I only had one shot left, sad to see the experience end but eager to discover what the project was like in its totality. 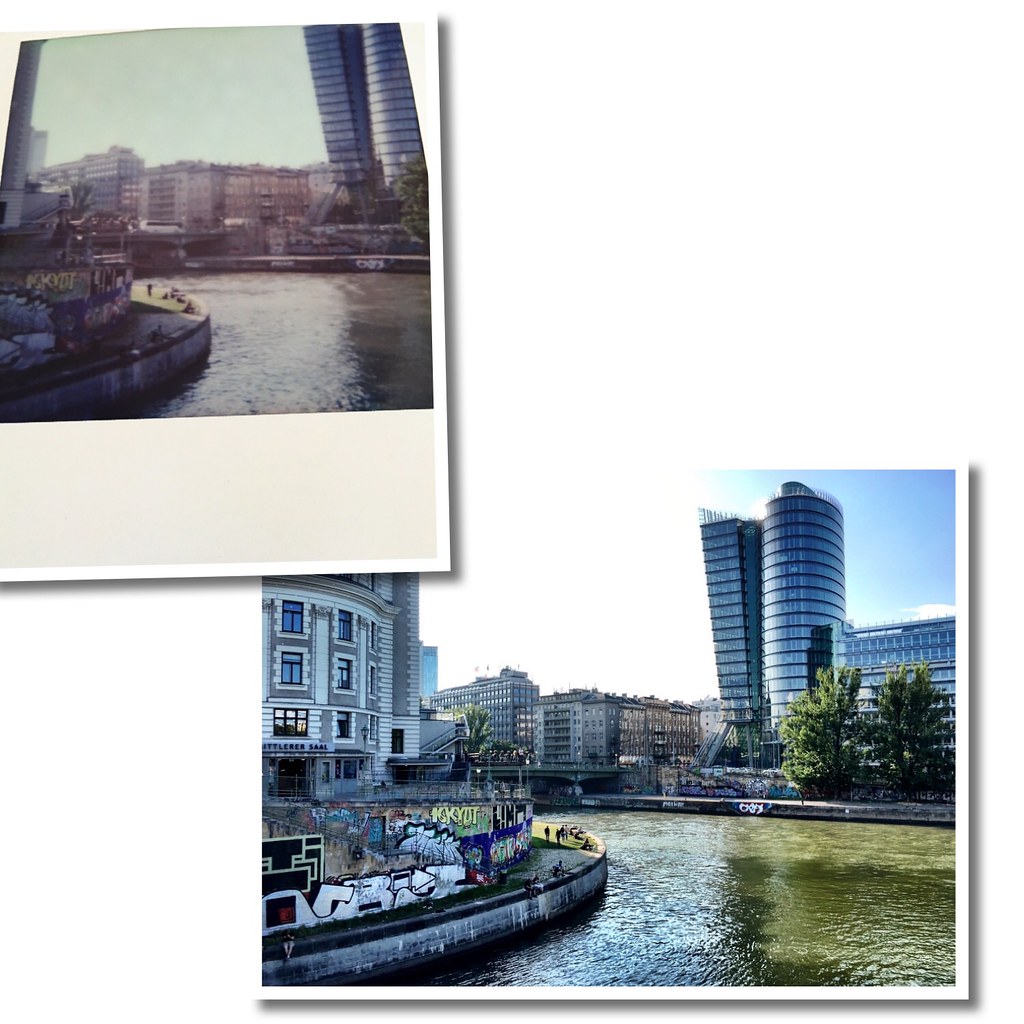 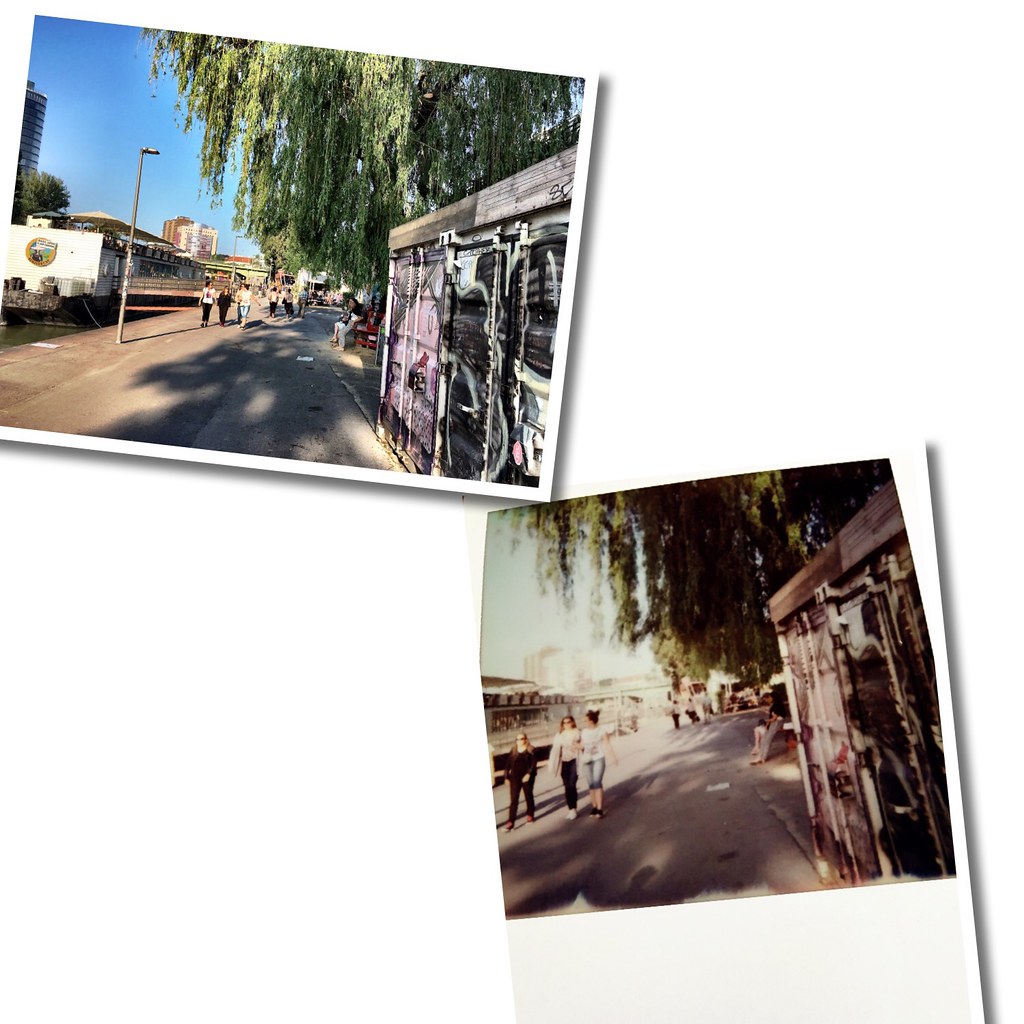 Turns out I did ok, the photos were (mostly) good but the experience is about much more than those physical souvenirs. The PolaWalk for me was a fun and engaging way to see more of Vienna; a side of the city new to me and in the process take some nice photos. I wasn’t alone either, all of the participants were more engaged than I’ve seen on a walking tour in a long time, and the cameras were the key. Using the instant cameras, everyone was forced to “be present” to be aware of their surroundings and to look, really look hard, at everything around them. It’s a genius idea to be honest, one I wish I had thought of.

If you’re in any of the three cities where a PolaWalk is offered, you should add this tour to your to-do list. Not just for the photos, which is a fun experience, but for the walk as a whole. It’s fun and innovative, both rarities in the world of walking tours and the perfect way, I think, to see Vienna. My only hope is that they soon expand to other cities around the world so that I can once again strap on the Polaroid and walk back through time, capturing those shaky and oddly colored photos in the process.

This trip is a project managed by iambassador in partnership with the Austrian National Tourist Office and other sponsors. LandLopers maintains full editorial control of the content published on this site.