Stretching for more than 1,500 miles along nearly the entire coast of Ireland, the Wild Atlantic Way is the longest coastal driving route in the world and certainly one of the most interesting. I first experienced part of this massive driving route a few years ago as I explored the idyllic Dingle Peninsula in the southwestern part of the country. Grassy green cliffs that fell into the crashing sea, sprawling farmlands and some of the nicest people I’ve ever met were all highlights of my short time on the Wild Atlantic Way. Those memories and the promise of new ones excited me for my most recent adventure along the driving route as I tackled the wild and wooly northwestern section of the Wild Atlantic Way, starting in Sligo, Ireland as part of a trip with Tourism Ireland.

I always have to remember to take warnings in other countries with a grain of salt. A “bit of a drive” in some countries translates to a normal day-trip from an American point of view. The drive from Dublin Airport to County Sligo in the North West wasn’t as long as I had feared – not even three hours really. One of the differences though between Ireland and the US is that most of that drive was along winding, country roads and not the sprawling multi-lane interstate I’m necessarily used to. Immediately though I knew that to be a good thing, as I sped past farms and villages, sheep and cows and those rolling green hills of Ireland that I remembered so fondly. In Ireland the drive IS part of the experience, and for that I’m grateful. It’s the best way to get to really see the country and admire those natural wonders for which she is so very famous. I was also jet-lagged and eager to get to my destination, and what a destination it was.

My goal for the week was simple, start in Sligo and drive along the Wild Atlantic Way through the Republic of Ireland and into British Northern Ireland, ending my trip in Belfast. It was all new ground for me and I couldn’t have been more excited. Some of the most iconic images we all have of Ireland come from this region of the country and to see it in person was something I’d waited a very long time to do. I plan to devote individual posts to most of these highlights, but I wanted to first share what driving the Wild Atlantic Way in Ireland was really like, along with some of the many sights that make it so very special.

My first introduction to Ireland’s north west coast, Strandhill is a beautiful beach community in the shadows of Knocknarea Mountain. Here the sea is rough and while swimming isn’t allowed, it’s one of the top destinations for surfers in the country.

Just a few miles from the village of Strandhill is one of the most important ancient sites in Europe, the 6,000-year-old Carrowmore complex. It’s the largest passage tomb cemetery in Ireland and one of the most impressive found anywhere in Europe. Giant mounds still stand where people are buried who are so ancient and remote it’s almost hard to imagine what their lives were like. Thankfully much of the site has been preserved through the years and today you can wander in and around the tombs, admiring the scenery along the way.

I fell in love with Sligo and I didn’t mean to. It was a warm, sunshiny day and the town was bustling as everyone took advantage of the early and sudden bout of summer. This is Yeats country, where the famed author is celebrated throughout the city and region. But Sligo is about much more than Yeats, and walking around the colorful streets, stopping in to look at ancient cathedrals or small museums, I found myself loving the city not because of Yeats, but because of its own inherent charm.

The cliffs of the Slieve League Coast, or Sliabh Liag, are amongst the highest marine cliffs in Europe and the views from atop them are stunning, But even more fun for me was to take a boat ride out and enjoy the rocky cliffs and hidden beaches from a completely different point of view.

An unusual national park, driving through the rocky and gorse-strewn lands surrounding Glenveagh Castle I felt as if I had been transported to the Scottish Highlands. When I finally saw the castle for the first time that feeling was made complete, but that was the point of the original owner. Constructed in the 19th century as a hunting lodge, the wealthy owner wanted to evoke imagery from the Scottish Highlands in an attempt to lure over the British aristocracy. Today the castle, and the lakes and lands surrounding it are all a national park and a beautiful place to spend an afternoon or, if you have the time, a day or two exploring. 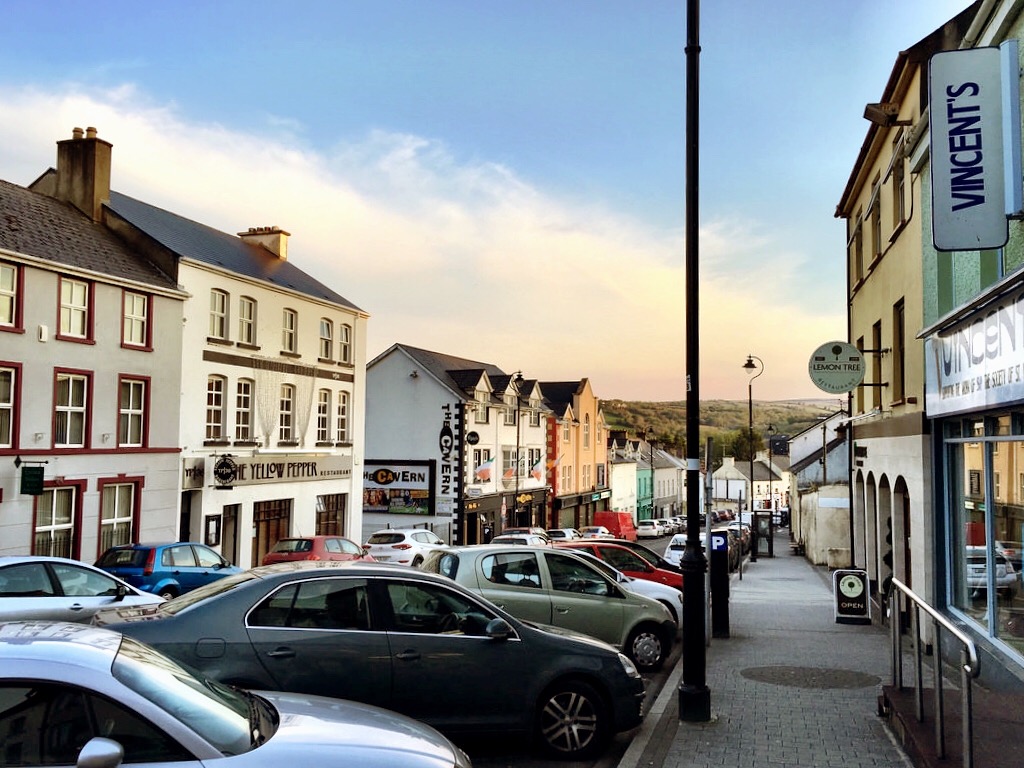 I admittedly didn’t have a lot of time in this city, but what I saw I really liked. One of the most important cities in the region, it’s well known for the historic sights within the city as well as a jumping off point for the Wild Atlantic Way to the south and the Causeway Coast to the east. It’s also where I found a wonderful restaurant in the middle of the city’s downtown core, the Lemon Tree Restaurant. This family-operated restaurant offers up great local dishes with a refined edge. It was one of the best meals I had on the trip and I heartily recommend it.

I spent a lot of time driving from place to place, but along the Wild Atlantic Way the drive itself is as important as any city or historic sight you see along the way. There’s just something special about learning how to navigate those narrow country lanes, especially on the left-hand side, driving past gorgeous farms, high cliffs and getting stuck behind more than one herd of cows. So many times I wanted to pull off to the side and admire the scenery, but then I would never have completed the drive. No, instead of constantly taking pictures I learned to appreciate the drive for what it was, and that became the most valued aspect of what was already an amazing travel experience.

The Wild Atlantic Way is one of the smartest concepts I’ve seen any tourism body execute anywhere in the world. I was there when the idea was just starting to gain traction and it was fun to return and see how, in just a few years, it’s become an ingrained aspect of traveling in Ireland. There’s a lot to do and see around the Emerald Isle, but using this coastal route as your guide is a fun way to explore and see areas you’d probably never find on your own.