“It’s too cold for the dogs,” was the inauspicious warning Valentijn, the owner of Bear Hill Husky gave as we arrived to the kennels somewhere in the middle of nowhere Finland. You know it’s cold when huskies would prefer not going out thank you very much, and a quick look at the thermometer confirmed what they knew instinctively. Thirty below zero is cold no matter what scale you use, add in the wind and I could only hazard a guess as to how cold mushing through the snowy fields near Rovaniemi would actually be. Located in the heart of Finnish Lapland, this is an area accustomed to the cold, but it’s also populated by people who all know to respect Mother Nature. And then there I was, a city slicker whose normal idea of roughing it is checking into a hotel without a Club Lounge. The day that was about to unfold was one of the most unusual, most rustic but ultimately one of the most memorable that I’ve enjoyed in a very long time.

Finnish Lapland is the largest region in the country, but it’s also the most rugged. The only real population center of note is Rovaniemi, a quirky northern town that when I visited in the middle of January was a frozen city the likes of which I’d never seen. But I also loved it; I loved feeling as if I was out on the frontier, on the edge of the world experiencing a place that few others get the chance to see. That’s a shame though really, it’s a very easy 1-hour flight from Helsinki and the experiences available that far north are so unusual and so extreme, everyone should try them at least once. I did a lot while I was there, but one adventure in particular both excited and scared me to death, a daylong husky driving experience coupled with a night in a rural forest cabin located exactly, right in the middle of nowhere. I didn’t fully comprehend it at the time, but an experience like this is essentially the dream of every Finnish person. Not only do they get to spend a couple of days outside in the middle of winter, but they also get to overnight in a remote cabin lacking both running water and electricity. This is the ultimate for Finnish people who have a love of cold weather unlike anything else I’ve seen before but also a fierce love of disconnecting with modernity and getting back to nature. The one problem with the plan? I’m not Finnish.

Dog sledding is fine. I like dog sledding; I own three huskies after all and enjoy being with the dogs. As I quickly learned though, I don’t particularly enjoy driving the sled itself. No, instead of standing for hours on end in -30 conditions, bundle me up and put me in the sled. Most people would love driving a sled for two days and I get that. I’m weird though, and that was more time in the elements than I could handle. Luckily (or not, depending on your point of view) the weather came to my rescue and instead of the 6-hour sled drive to the cabin, with another 6-hour drive back the next day, it was decided we would only go out with the dogs for a couple of hours before driving a truck to the cabin itself. For once in my life I found myself thankful for weather so extreme it freezes body parts that should never be frozen.

There’s really nothing quite like a dog sled experience. Rushing through the snowy woods you feel like you’re flying, but the only sounds are the pants of the dogs themselves and the gentle scraping of the sled runners against the snow and ice. It’s silent, it’s peaceful on an almost spiritual level and unlike snowmobiling, nothing feels out of place. You’re not an interloper, a stranger in this bucolic wonderland; instead you’re part of it. If you’re in a sled of two people you can take turns driving or, if you’re like me, you can just be a happy passenger watching the world rush by.

It’s not always easy to know which animal experiences are and are not responsible. That’s especially true when it comes to dog sledding, an issue I’m extremely sensitive to. But spending two days with the owner of Bear Hill Husky, I can confirm that not only is this a responsibly run enterprise, but that the owner does indeed care deeply for his dogs.

I know this because spending the night at the rural cabin, there was little else to do except talk to each other. I’m not a camper and I’m not a big fan of being disconnected from the world, so I wasn’t entirely prepared for the traditional Finnish cabin experience. I have no idea where the actual cabin is located except that it was far away from any discernible trace of civilization, deep in the forest next to a perfect and pristine frozen lake. Really, a more traditional image of wintertime in Finland could not have been better scripted and it’s for this seclusion that makes this 2-day experience such a popular excursion.

Right away though we set to work, starting a fire so that we could get the wood stove to generate enough heat both in the cabin and, almost more importantly to the Finns in the group, also in the nearby sauna. Finns take the sauna experience very seriously; nearly everyone in the country partakes in sauna on a regular basis. The ultimate is what the cabin was thankfully equipped with, a separate outbuilding that was entirely devoted to sauna. The wood-fired sauna was as traditional as it gets in Finland and learning the proper way to take a sauna turned out to be a critical part of my overnight experience.

While the owner started cooking dinner, the men and women took turns heading out in the freezing weather to spend some time in the gentle heat of the sauna. Unlike electric saunas, which tend to get too hot, the traditional wood version is a more gentle form of heat. It’s hot, no doubt there, but it’s not as oppressive as other experiences I’ve had in gyms and spas around the world. It’s normal to go in naked, but no one seems to care – only me, the American in the group, had a slight problem with it. But that was soon forgotten as we chatted and shared stories in the sauna, getting to know each other better than I had ever imagined. Midway through we got up and went outside to stand in the -30 or so night air, an intermission from the heat and smoke of the sauna. What seemed like only a few minutes was more than an hour by the time I left and I could have easily spent hours luxuriating in the small wooden cabin. A great effect of sauna though is that it makes you hungry, and chowing down on a very traditional Finnish meal of reindeer stew, mashed potatoes and lingonberry was as close to nirvana as you can get. It was a homey style of fun, but fun nonetheless. I never would have guessed how much I would enjoy that simple evening, but even now upon reflection I think that it meant more to me than I realized. 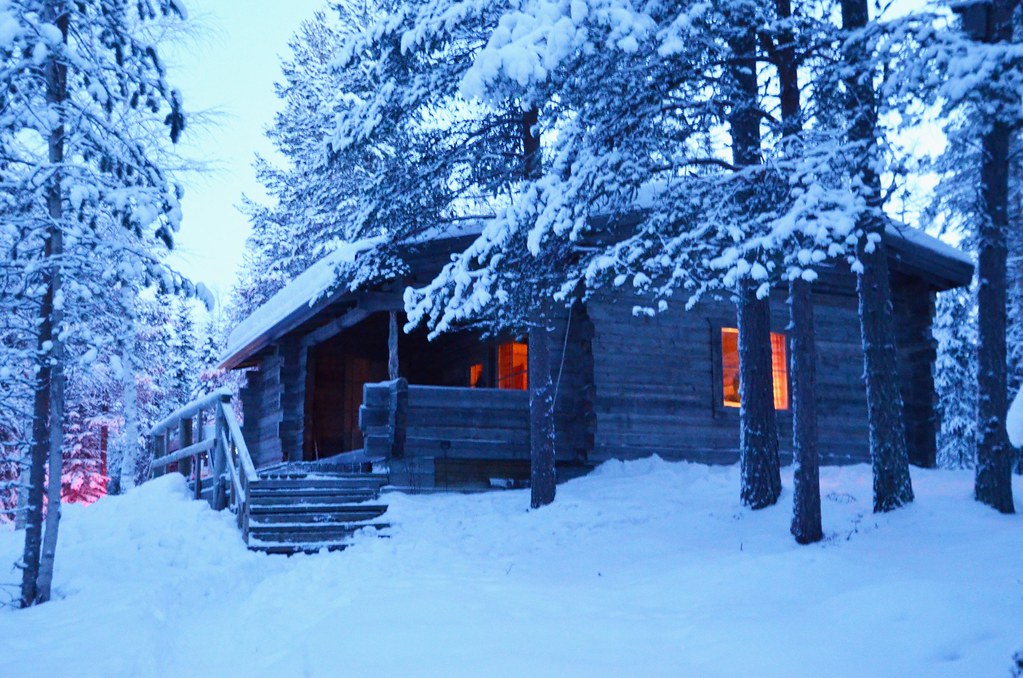 Leaving the next morning I was a little sad to go, but eager to get a proper shower in a bathroom with running water. I had spent the night in the middle of nowhere without electricity or running water and had survived. More than just survive though, I had a wonderful evening. That night out there, watching the stars on the frozen lake, that was when I finally began to understand what makes Finland and her people tick. Cities like Helsinki are fine, but it’s only getting out into nature, preferably during the winter, when you finally start to understand what the heart and soul of the country looks like. It’s a place that not only appreciates the wonders of nature, but a culture that seeks to reconnect with nature whenever it has the chance. Finland has a lot of space, and it’s this space that means so very much to the Finnish travel experience. So much so that I can’t imagine visiting the country and not spending time outdoors, getting to know the country on an intimate and ultimately spiritual level.

I’m not sure that I really need to do a two-day husky sled experience with an overnight cabin stay again anytime soon, but I’m incredibly thankful for the opportunity I had in Finland. Believe it or not, this is a form of luxury travel, although not in the form we are most used to seeing. The accommodations were spartan and the conditions rugged, but this adventure isn’t without its cost, the price more than fair though for everything you get in return. It’s a luxury experience though not just because of the cost, but because of how extraordinarily rare it is. For me, luxury travel also means having the ability to see and experience things so unique, so unusual that they become de facto luxury experiences. More than that though, I think every visitor to Finland and Rovaniemi needs to find a way to get out and connect with nature, whether it’s on this excursion or not. It’s truly the only way to properly understand just how remarkable a country Finland is and to appreciate everything that she has to offer.