Before first visiting to Finland I, like most people I think, knew what a sauna was. I’d seen them in gyms, hotels and spas; those incredibly hot rooms that I generally avoided. As I very quickly learned while in Finland though, a real Finnish sauna isn’t just a place or a thing, it’s an experience. It’s an integral part to Finnish culture and as such, there are some very strong opinions about the proper way to enjoy sauna in Finland. With all of this in mind, I thought I’d put together a few of the more salient points that I think everyone should know about a real Finnish sauna.

It started in Finland

While many cultures around the world had types of saunas, the Finns take great pride in the claim that they have one of the oldest and continuously active sauna cultures in the world. The Finnish sauna started more than 2,000 years ago and was little more than a modest burrow in the earth in which a pile of stones heated for the bathing process were added. Because, ultimately, that’s what sauna really is – a way to get clean. Water thrown onto the hot stones give off vapor, which makes the bather sweat. Before leaving the sauna, it is still common today to either douse yourself with water, or to have a permanent tub installed inside the sauna. This natural process of sweat bath followed by cleansing isn’t only intensely healthy; it’s an incredibly important aspect of Finnish society.

As with all things in life, even how to use a sauna comes with a certain code of conduct. There is a Finnish saying that “one must behave in sauna as one would behave in church.” That means noise, shouting and swearing is very much frowned upon, slights I all witnessed while visiting the headquarters of the Finnish Sauna Society in Finland along with some other newbie sauna goers. The fact that there even exists a Finnish Sauna Society should tell you something about its importance, but at their headquarters they have several different sauna types, giving members the opportunity to try a variety of sauna bathing styles. Sauna goers should also be naked, something that still causes my fellow Americans to unconsciously shiver. Yet the societal mores in Finland are different, and chatting with someone (in a sauna of all places) in Northern Lapland, I began to understand why these concerns about being naked don’t exist in Finland. He said growing up going to sauna several times a week and seeing all different kinds of people naked means that Finns don’t usually suffer from the same body-image issues that the rest of the world can’t seem to escape. “I just understood that everyone looked different and that was ok,” he went on to say – a refreshingly open and healthy attitude. That being said, members of the opposite sex don’t usually take sauna together unless they’re members of the same family and even then, often times men and women bathe separately.

Finns live and die in them

There’s an old Finnish saying that Finns live and die in the sauna. At first I smiled thinking it was just a nice example of flowery speech, but it’s actually literally true. For generations, the cleanest, most hygienic place in any home or small village was the sauna. It was regularly cleaned and was far better than homes of centuries past. So when it came time to give birth, that’s where the mother-to-be would go to make the delivery. The same holds true after death, it was the most logical place to briefly store a body while preparing for the funeral. Although literal, this saying has taken on incredible societal meaning, further proving just how important and common the sauna is in Finnish society. 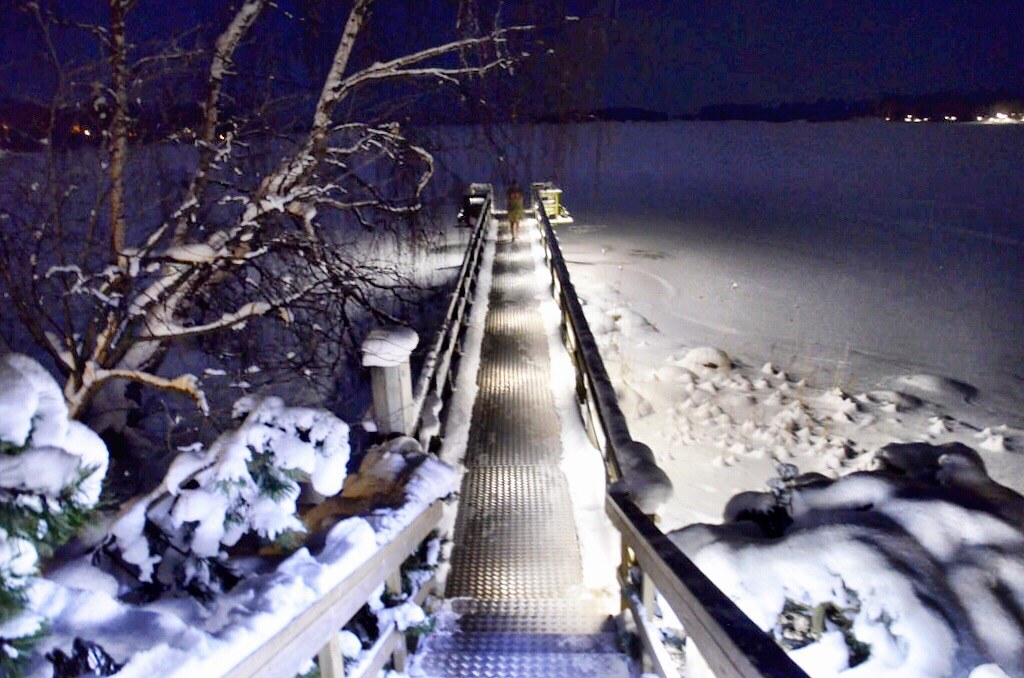 Everyone in Finland enjoys them. Almost literally.

About 5 million people live in Finland and yet the country has about 1.6 million saunas. Think about that ratio of person-sauna for a moment. Everywhere I went, and I mean everywhere, I found saunas. In my hotel room, in conference centers and naturally in the airport lounge as I was leaving the country, saunas are a ubiquitous part of daily life in Finland. If you live in a city like Helsinki you may have a sauna in your house or apartment, but more likely you belong to a sauna club of some sorts or you go to more public saunas either around town or at work. I met a lot of Finns during my time in the country and was surprised that sure enough, yes, they all have sauna traditions. Some visited them once a week with friends, others every other day at home, but the fact remains, I never met anyone who didn’t have a sauna schedule. That’s simultaneously a little strange but also amazing.

There are many different kinds of sauna but the most traditional is the smoke sauna, which I actually had the opportunity to try in a secluded forest cottage outside of Rovaniemi. The smoke enters the room while the sauna is being heated and produces a pleasant fragrance of wood smoke. Once the room was properly heated we entered; the small wooden room built originally for family use. Benches lined the sides, and in the corner were buckets of cold and hot water both to heat the stones as well as for bathing afterwards. I was worried at first that the heat would be too intense, but that was based only on my own experiences with electric saunas. The real version is a lot different and while certainly hot, it wasn’t overwhelming. My Finnish hosts then led me through the process of sauna. After sitting there chatting for a while, we all got up and went outside in -30 degree temperatures to cool down for a few minutes. Standing there in the night air without my standard five layers of clothing on should’ve been painful, but instead it was pleasant. After a few minutes we went back inside and repeated the process a few times. It’s also common to take a dip in a frozen lake in between sauna sessions. Before the sauna experience I thought I’d only last a few minutes, but somehow more than an hour passed by without my noticing it. It was fun on many levels, not just for the health benefits but also for the camaraderie and friendships made. It also seemed to be the right activity for a cottage in the middle of the Finnish countryside. After a good sauna experience a hearty meal should be enjoyed, whether it’s the venison stew I had in the cabin or something a little less rustic.

It really is healthy

Of course Finns have always maintained that the traditional Finnish sauna is healthy, but turns out they’re right – it really is. Of course there’s the mental relaxation involved as tension fades and the muscles unwind. Even someone as naturally tense as myself leaves the sauna feeling relaxed and invigorated. Saunas also flush toxins, cleanse the skin, induce a deeper sleep and improve our cardiovascular performance. So not only are they fun, but they’re healthy too.

Have you ever tried an authentic Finnish sauna? What did you think?