I’m not exactly sure when the idea of hugging a panda first popped into my head. It was a long time ago, I know that, and I’m not sure if I was ever truly serious about it. I have always loved pandas and just like for millions of others, they’re my favorite animal. There’s just something so unusual, so mysterious and yet so humanlike about these black and white balls of fluff that has always captivated me. Living in the DC area I’ve been lucky to have them as neighbors, but I never thought I’d ever have the chance to actually interact with one. As I got older and people asked me about my travel bucket list, I would always jokingly say “Hug a panda.” I thought it so outrageous and so unlikely that it would always enjoy a permanent spot on that list. But then came along a special chance to get a panda hug and I knew I couldn’t say no.

Working with Cathay Pacific Airways, they asked me to put together what my ideal trip to China would look like. No, better said, to see what my first introductory trip to China would look like. The country is far too vast and far too interesting to relegate to a single travel experience, but for my first foray into the Chinese mainland I knew not only that I had to visit the capital city Beijing, but if it all possible I had to hug a panda in the panda capital of the world, Chengdu.

Chengdu is a large city in China’s Sichuan province. It’s one of the oldest cities in the country and has enjoyed a position of power and influence for millennia. Food, a fascinating culture and warm-hearted people are all long-standing reasons to love this city, so it must chagrin them a bit to know that they are world famous not for any of these hallmarks of the city, but for their furry residents. The Chengdu Giant Panda Research Base is the best-known center of Giant Panda research in the world. It started simply in the 1950s, but by the 2000s it had nearly 100 pandas in the reserve and was responsible for hundreds of panda births. This endangered species calls the mountain ranges in south-central China home and Chengdu is the historic center of their habitat. It’s also from here where dozens more pandas to all corners of the world are loaned, usually as part of diplomatic entreaties between China and foreign governments. Chengdu is the largest of the panda reserves and thanks to its proximity to the metropolitan area of Chengdu, is also the most visited by tourists. But it’s not the only reserve near Chengdu and more importantly to me, you can’t interact with the pandas at Chengdu. So instead I visited a newer and lesser-known facility about an hour outside of town – the improbably long-named Dujiangyan Research Center of Giant Panda Breeding and Release.

Known locally as the Panda Ark, Dujiangyan is just one of many reserves found in the region and here they focus on rescue, rehabilitation and disease control. Covering about 126 acres, walking into the facility it looked just like a panda rescue center should look. Set in amongst mountains and natural bamboo forests, it has an ethereal look to it, a place where you’d expect to find pandas. But it’s also a very modern facility, with large private enclosures for the pandas, a hospital, research area and an educational center. The goal of Dujiangyan from the beginning was to create a new kind of eco-tourism in the province. A way to study and preserve the species while at the same time allowing the public access so that they can learn more about the beautiful Giant Panda. And that’s why I was allowed to hug a panda. 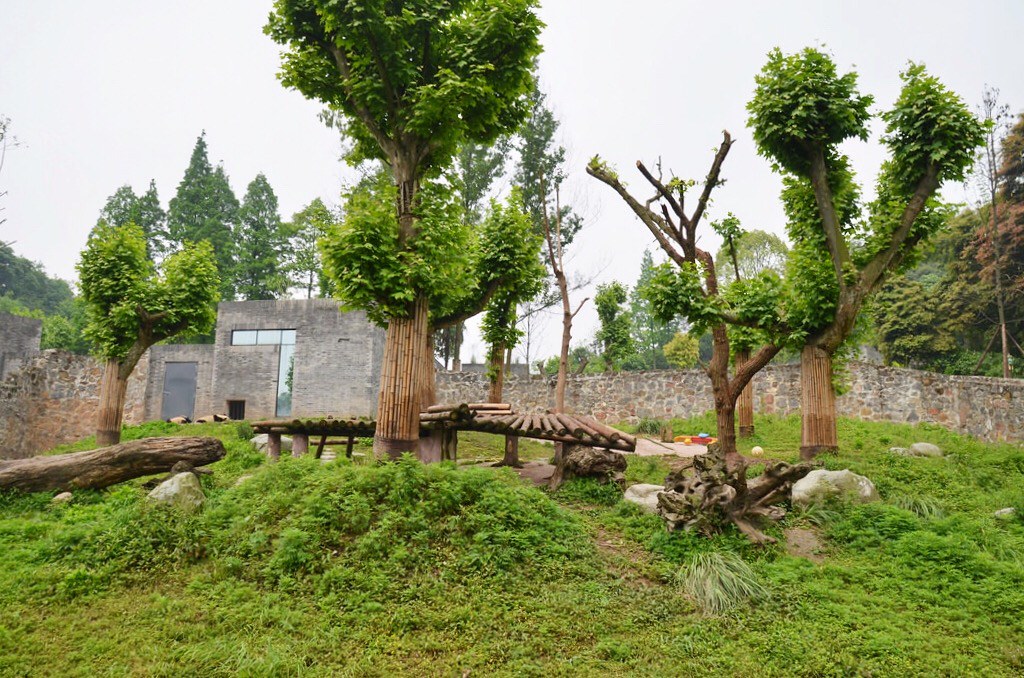 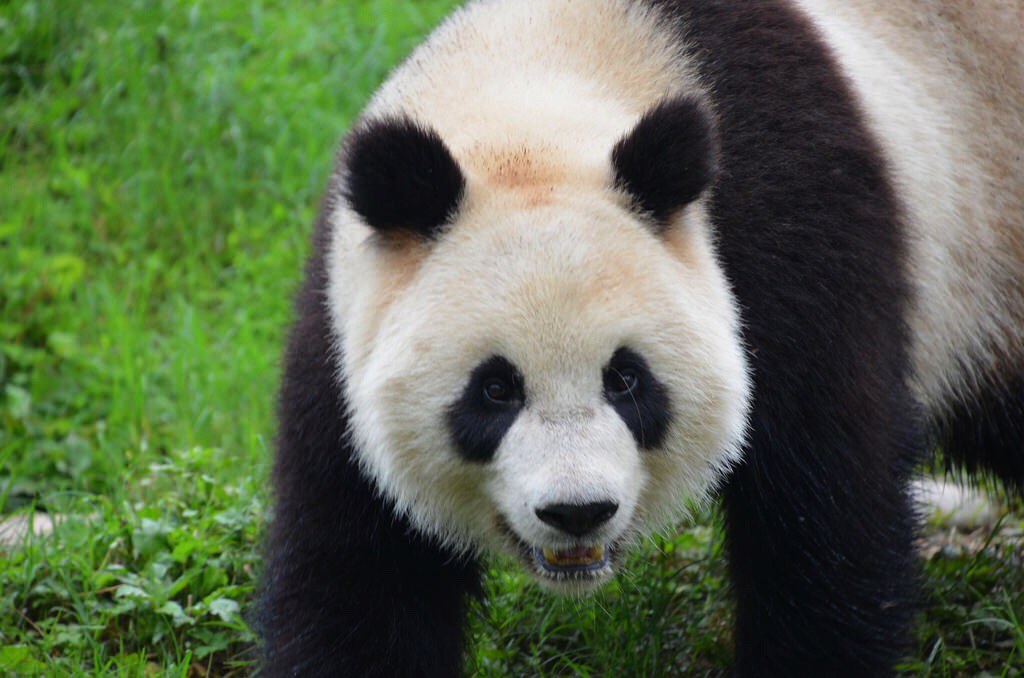 There are several volunteer programs available at Dujiangyan and when I go back I’ll definitely join one of the longer courses. Volunteers can spend the day at the facility, dressed in panda keeper outfits they learn all about the day-to-day care of the pandas. The volunteers do everything from clean up after the pandas to help prepare their food, all in an effort to create a greater understanding and awareness of the Giant Panda. The research base also offers options for folks with less time to spend, like me.

For a donation to the center, a limited number of guests are allowed to sit next to and “hug” a panda in a carefully controlled environment. Knowing how popular this is, I arranged for the visit well in advance and couldn’t believe my luck when I was told that there was space available. Arriving into the volunteer center, I was met by one of the educational guides whose job is to instruct the volunteers who come almost every day. The chance to spend the day with pandas is a rare experience, and because of that it has quickly become one of the most popular tourist activities in Chengdu. It’s not cheap though and because of that and the limited slots available every day, it feels like belonging to a small club of panda enthusiasts when you finally do arrive.

Before meeting my huggable panda, I spent some time wandering around the facility itself, impressed by what I found. In a series of large and forested enclosures are a variety of Giant Pandas, raging in ages and from a variety of places all over the world. It was breakfast time and the pandas were hungry, excitedly munching the bamboo stalks and racing across their enclosures as new bales were delivered. I could’ve spent the whole day just standing there in the cool mountain mist watching them play and lumber about in ways that can only be called panda-like. I’m not sure what it is exactly about this gorgeous creature that enthralls us so much, but there’s no denying their magnetic charm when you stand in front of them. I’d only ever seen them in zoos where at the most there were 2 or 3. To be in a reserve with dozens of pandas, including babies was a special experience in its own right, hug or no hug.

The time finally came though for my hug and after a staff briefing, we were all led to the private section of the research facility where biologists conduct their work far from the prying eyes of tourists. Suited up in plastic gloves and a hospital gown, we all felt nervous anticipation as the juvenile panda was led to a nearby bench. For most of us, this was a moment we had dreamed of since we were little kids, not even realizing that such an encounter was even possible. Most had traveled halfway around the world just for this moment, just for the mere chance to interact with one of the world’s rarest and most precious animals. The keepers were rightfully strict, allowing each of us no more than 20-30 seconds next to the panda, whose interest was more concentrated on his bamboo snack than it was us. I was beaming though, as happy as I’ve been in a long time sitting there with my arms around this infinitely huggable bear. I couldn’t believe it and ever since that moment have thought back to it, trying to mentally reconstruct every second in an attempt to keep the memory alive for as long as I can. His hair was course, but overall the panda was soft and careful not to bother sensitive areas I gave him a quick squeeze before allowing the next guest their opportunity. Thirty years of pining had been reduced to just a few seconds, but they are brief moments that I know I’ll never forget. 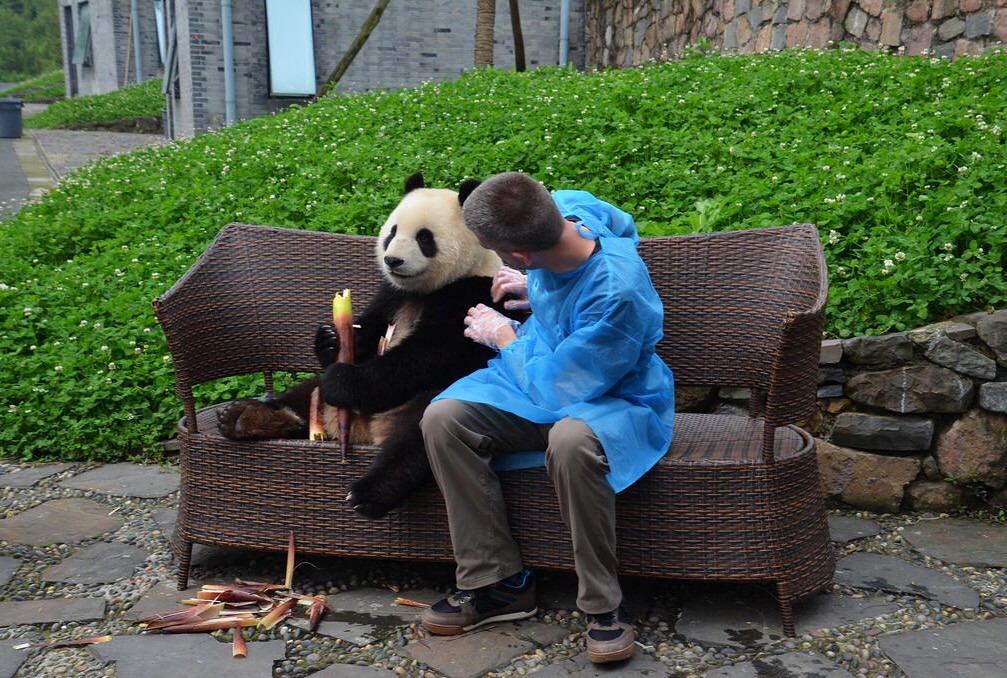 The purpose of the panda experience at Dujiangyan isn’t to give rich tourists a unique experience. The money donated goes back to the center and helps fund their important efforts. But what’s more important is the education that arises as a result. I spent several hours at the research base learning even more about the pandas than I already knew, and by the end of my time there was proud to have contributed just a little to their preservation. I was deeply impressed with the Dujiangyan facility, thankfully so as it turns out. We never know what wildlife encounters will be like until we’re there. Personally, I’m always worried that they won’t be sustainable efforts so, sadly, I mostly avoid them. This is different though, this is a new model in China in eco-tourism and is part of a long-term effort to find new ways of preserving this important animal. Pandas are about much more than being cute, they are a symbol of China and an important aspect of the Sichuan mountains. They’ve rebounded in recent years but it’s only through ongoing research and education of the public that this can continue. And in the process if that means that folks like me can spend the morning hanging out with them, then all the better. I couldn’t have imagined a better example of what #MyChinaExperience means to me than getting that all so rare panda hug.

12 thoughts on “How To Get A Panda Hug In China”