I fly a lot and I fly in Business Class a lot; it’s an important part of the travel experience for me. That means that it’s easy for me to compare and contrast between airlines when it comes to their premium service and believe me, not all are made the same. It’s always amazing to me how even the smallest of differences between airlines can have the most impact, whether it’s a friendly flight attendant or a well-executed meal. I recently flew with Turkish Airlines to Tanzania where I joined my luxury safari adventure with Abercrombie & Kent. Flying to Mt. Kilimanjaro Airport from the United States, the options were somewhat limited but as soon as I saw that Turkish Airlines flew directly from Istanbul, I knew that was the choice for me. I’d long heard great things about their Business Class service but had never had the chance to experience it for myself and as it turns out, that flight experience played a big role in the overall enjoyment of my trip. Rather than just outline the specifics of the seats and show photos of an amenity bag (I’ll do a proper review of those aspects soon), I thought I’d share a few reasons not only why I enjoyed my flying experience in Turkish Airlines Business Class, but why the airline really impressed me a lot more than I thought it would. 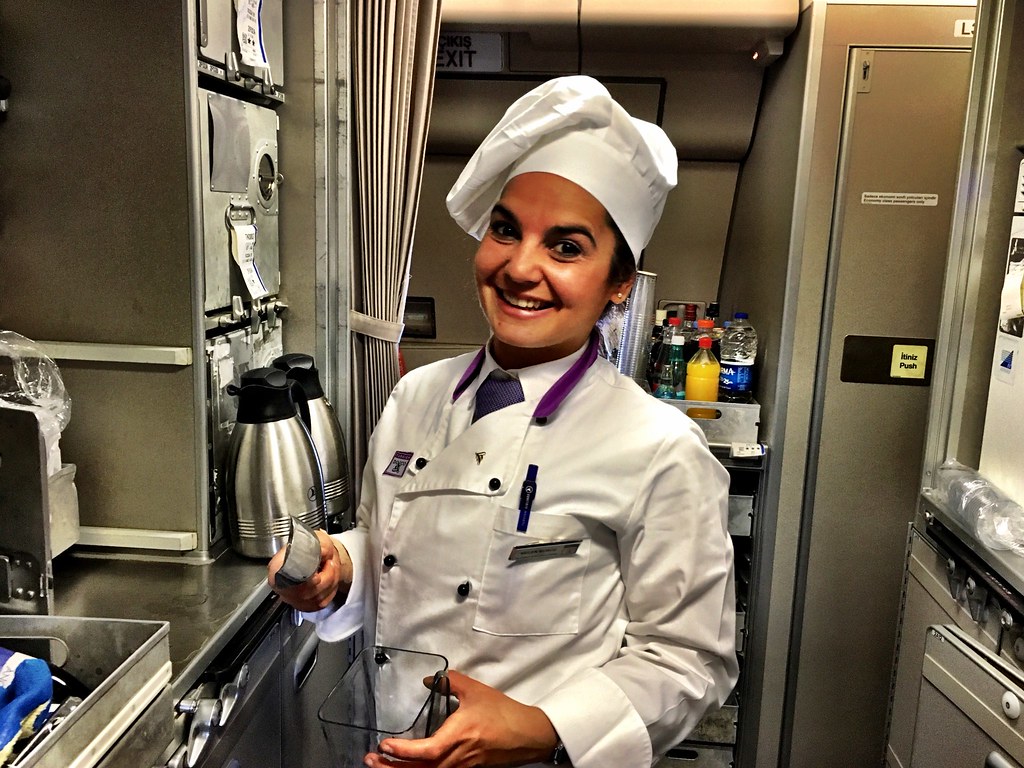 Every airline says they have good food, but rarely is that true. Most airlines also spend an absurd about of time, money and energy creating special menus for their Business Class passengers, but even those usually fall flat with me. It all looks great online, but then on the aircraft it’s the same old tired chicken dishes or tournedos of beef. Almost immediately though I realized that Turkish was different and over the course of 4 flights with them I now understand that food isn’t just a part of their premium offerings, it’s at the core of their Business Class experience. Along with the flight attendants who greeted me as I came onboard for the first time were the in-flight chefs, amiable looking staff dressed in chefs whites and big floppy hats. I knew they’d be there, but I was still surprised when I first saw them, wondering what it would mean for the food experience. Immediately after takeoff, the service began in what was ultimately a three-hour progression of snacks, appetizers, main courses and desserts, all individually served. As the meal began, flight attendants set up our linen and silverware-laden trays including a special touch I’d never seen before while flying, flickering tea lights using LED bulbs. It’s a small thing and ultimately probably not necessary, but it was a wonderful small detail that made everything seem extra special.

Main course options were dutifully noted and carried out and upon arrival they looked nothing like airline food I’d seen in many other Business Class cabins. There wasn’t even an inkling of an aluminum container to be found, instead the meals looked handcrafted specifically for each of us. It really felt like eating in a restaurant and the best part was that it was delicious as well. I have a massive sweet tooth, so dessert was my favorite aspect of the dining experience. Flight attendants wheeled carts laden with desserts of all kinds, allowing me to pick and choose exactly what I wanted. The flight attendants didn’t just plop the food on the plate either, they took the time to delicately arrange it on the plate, the final product looking like the result of a fine-dining education. That service can’t be taught, it just has to exist. I’ve flown with many airlines where all I get from flight attendants is attitude and heavy sighs and complaints. That just doesn’t exist on Turkish Airlines; instead I felt like a valued guest, which was a nice change. 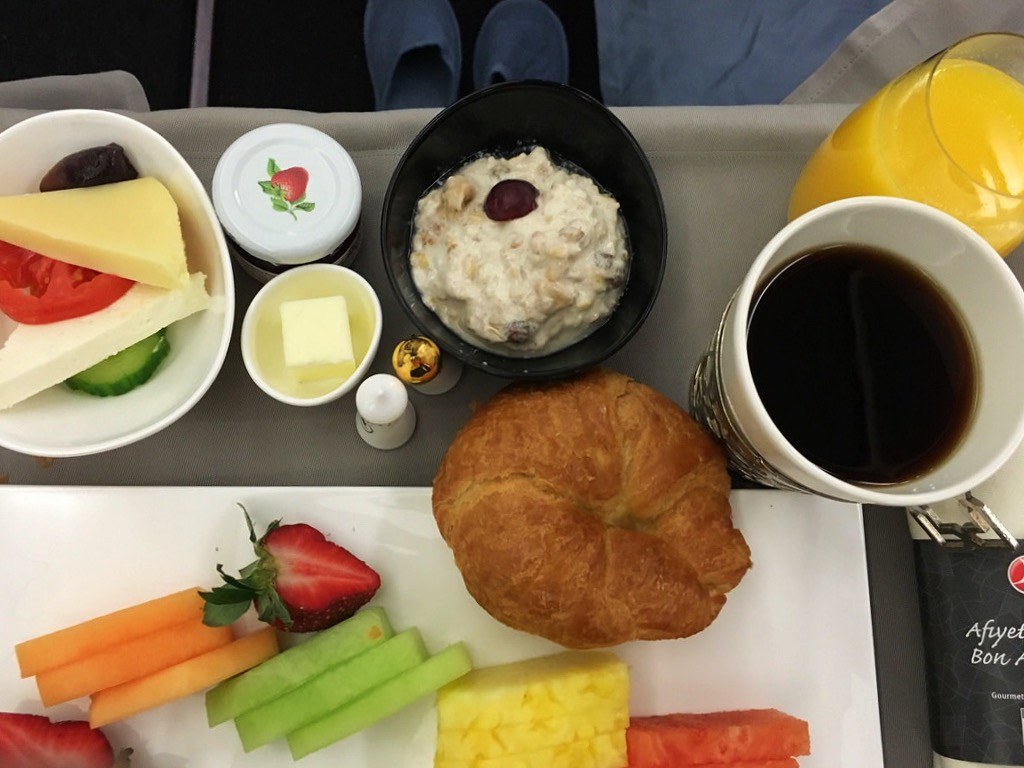 It’s one thing to have great service and food on those 10-hour long flights from one major capital city to the other. But you usually see the real heart of an airline on its smaller aircraft on less popular routes. Flying to Mt. Kilimanjaro airport in Tanzania, we were on a 737-900ER, while certainly not small it also wasn’t the ultra longhaul aircraft that had whisked us away from home the night before. I flew in both the Economy and Business Class sections for these shorter legs, but both were honestly fantastic experiences. In coach, everyone received amenity kits, welcome candies and even a printed menu for dinner. In Business Class the experience wasn’t all that different from what I had experienced on their larger aircraft, although mercifully shorter. Once again, food was the focus and it was executed well, even without the chefy influence. That ability to scale your services and products seamlessly across the fleet is a challenge all airlines face, but I was really impressed with how Turkish Airlines managed to accomplish that with apparent ease. 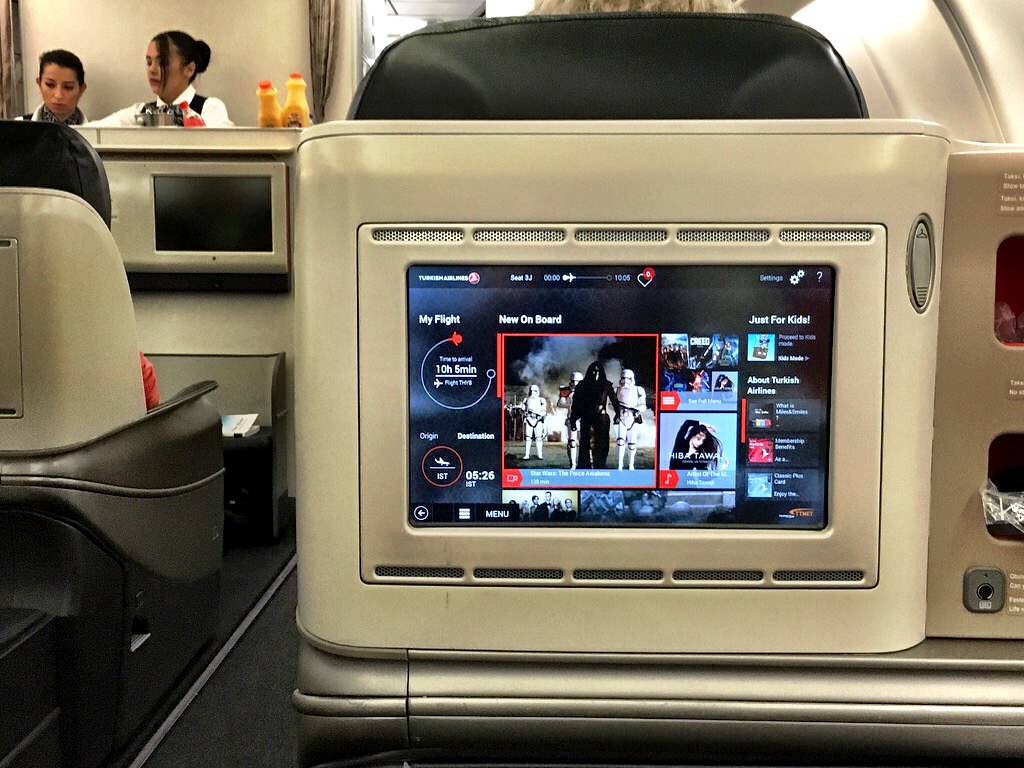 I don’t usually write about entertainment options available onboard aircraft, they are what they are. But lately as I’ve flown on other airlines I’ve noticed a lack of anything decent to watch that in turns helps me kill some time while flying. With Turkish Airlines I had the opposite problem, over the course of nearly 40 total hours of flying with them I had too many options. It was a nice change of pace and throughout those long trips I caught up on every movie and TV show I’ve missed over the last 6-months, which was a lot really. In Business Class, massive headphones were also provided so that I very easily created a little cocoon for myself that enabled me to relax and ultimately get some sleep as well. Which takes me to my next point… 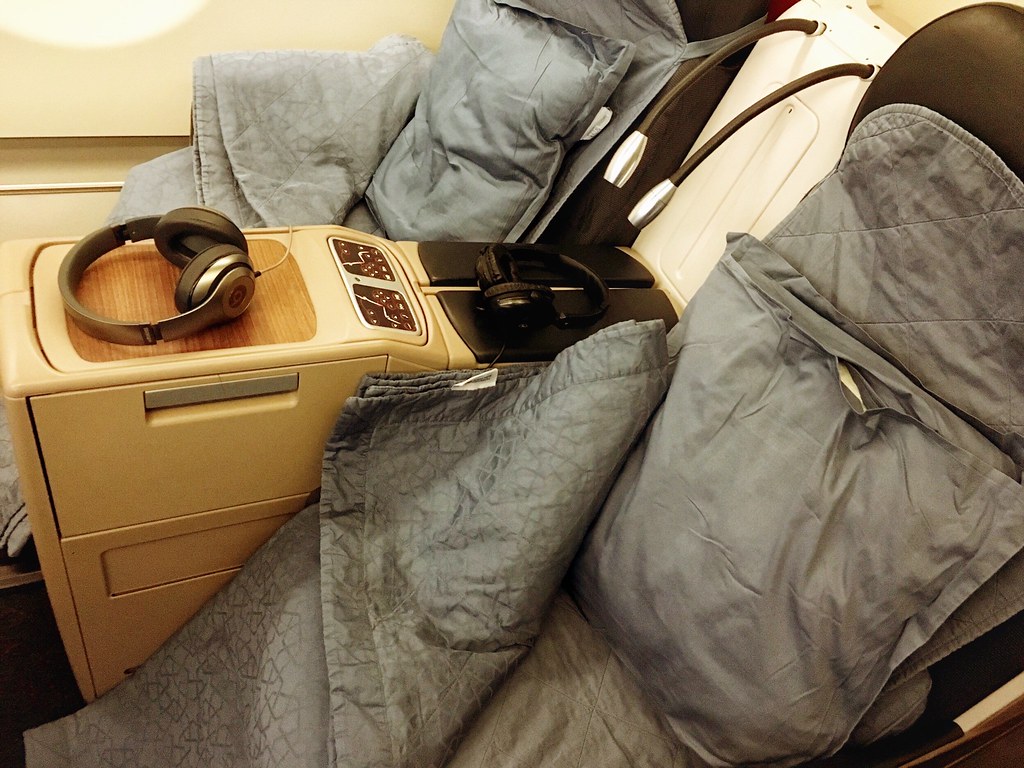 As soon as I sat down I discovered two things: 1) that my longer-than-normal Business Class seat extended into a fully lie-flat position and 2) that there was a sleeping menu onboard. Available to Turkish Airlines Business Class passengers is the Bohça bundle, which draws from Turkish culture and includes a sleeping pad, quilt, sleeping pillow, waist pillow and slippers. It was an entire sleep experience and is something many times I see reserved for First Class guests only. When I was ready to sleep, the flight attendant assembled the bed for me, fitting the sleeping pad around my seat and in less than a minute my chair had transformed into a comfortable bed. I’m tall, so the ability to sleep comfortably on a flight is hugely important to me, and also hard to achieve. But it was late, I was tired and this near-perfect sleep setup allowed me to get several hours of rest, arriving into Istanbul a little groggy maybe, but not my normal exhausted self.

I plan on writing more thorough reviews of my experiences with Turkish Airlines Business Class ultra longhaul flights as well as their shorter flights in multiple classes of travel. But first I thought I’d share a few qualities of the flight experience that surprised and impressed me, making this an airline I’ll definitely look forward to flying again in the future.