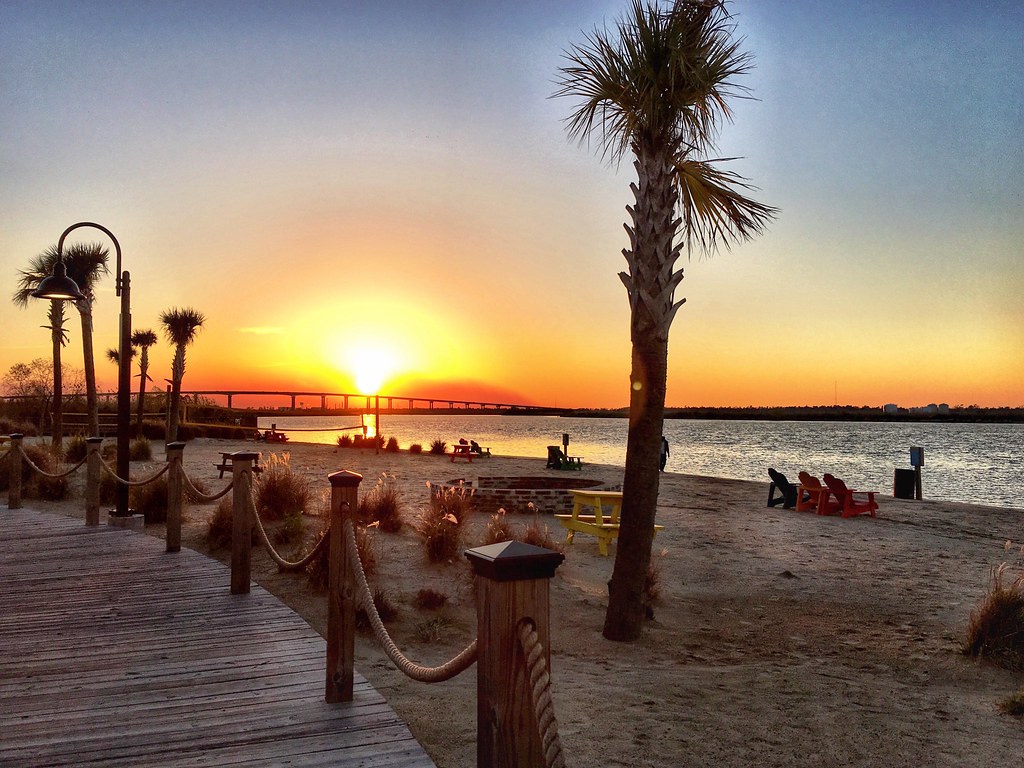 Flying into Lake Charles, Louisiana, I wasn’t exactly sure what to expect. I knew very little about this Southwest Louisiana city, much less anything about their food scene, yet that’s why I was there. Working with the Louisiana Tourism Promotion Association and Louisiana’s Culinary Trails program, my goal was simple. Eat my way through the region, learning all I could about the culture, history and traditions of the most popular foods as well as discover new trends and innovative young chefs. A tall order for sure, but I was excited to explore this region of Louisiana for the first time, a region that is perhaps best defined by its food culture.

During my time in Lake Charles I was constantly surprised not only by the variety of dishes, but their quality from award-winning chefs to line cooks serving up meals the way they always have. Lake Charles is a great mix of new and old coming together to create a culinary scene that surprises most first time visitors. I ate a lot in Lake Charles, but I thought I’d share a few of my favorite food moments in the city which, when combined, I feel also do a nice job of sharing the food story of this dynamic community. 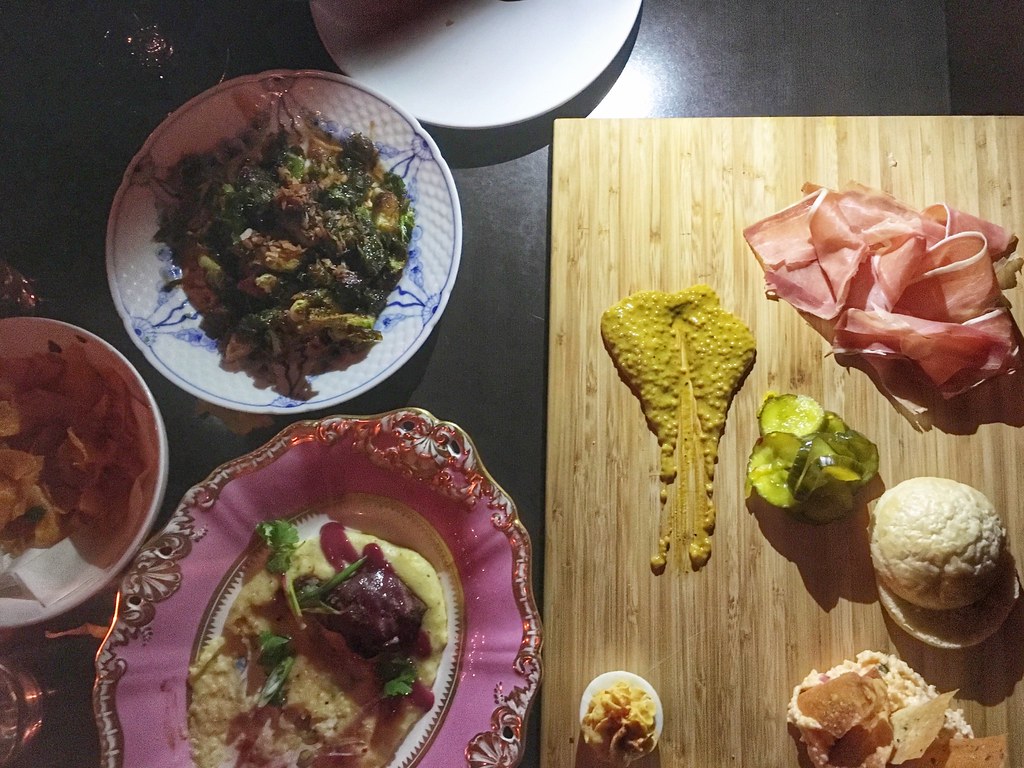 When a chef’s past experiences include stints at Brennan’s, Commander’s Palace and the French Laundry, it’s natural to expect a certain level of pretension with the food. But as soon as I walked through the doors of Restaurant Calla, one of Lake Charles’ newest restaurants, I knew that was far from being true. Chef David Sorrells wanted his restaurant to be simple, artistic, relaxing but also exceptional. Using the freshest local ingredients, Chef Sorrells has created a foodie retreat unlike anything else you’ve experienced before. Featuring a variety of locally inspired small plates, the goal of Calla is to foster communal experiences; sharing dishes, talking, laughing and enjoying the experience for just that – as an experience. I probably ordered too much from the menu, but I was eager to see what this Louisiana version of tapas was all about and I certainly wasn’t disappointed. Sweet potato chips, veal sweetbread nuggets, bone marrow, South Texas antelope and one of the best charcuterie boards I’ve ever enjoyed all came together to create a perfect evening of laughter, good food and a thoroughly enjoyable experience. This is smart food prepared expertly, but without pretentiousness, instead the menu and staff are inviting and welcoming, just what any great restaurant should be about.

I’ve never met anyone who knows as much about donuts as the owners of the small but locally cherished bakery, Delicious Donuts. It was a Saturday morning when I squeezed through the door, the small shop doing a fierce business on one of its most popular days of the week. Immediately I could see why. The sugary smells of freshly made donuts filled the air and in the display cases were any number of donuts ranging from basic glazed to more festive, Easter versions. I have eaten a lot of donuts in my life, but after taking my first bite into the glazed donut at Delicious Donuts I knew it was something special. A proper yeast donut should have a light ring around the middle and melt in your mouth almost immediately. Spending years baking and studying donuts around the country, the owners here have done something I thought impossible – they have created the perfect donut. But that’s not all they do, they are also well known for their King Cakes, available in a variety of flavors and shipped around the country. For something on the savory side, Delicious Donuts also has a unique small bite, kalotchies. Originally from Central Europe, these fried small pastries are filled with any number of ingredients from boudin to bacon & egg and even shrimp or crawfish. It’s a nice addition to what is already an impressive lineup of perfectly executed baked goods. 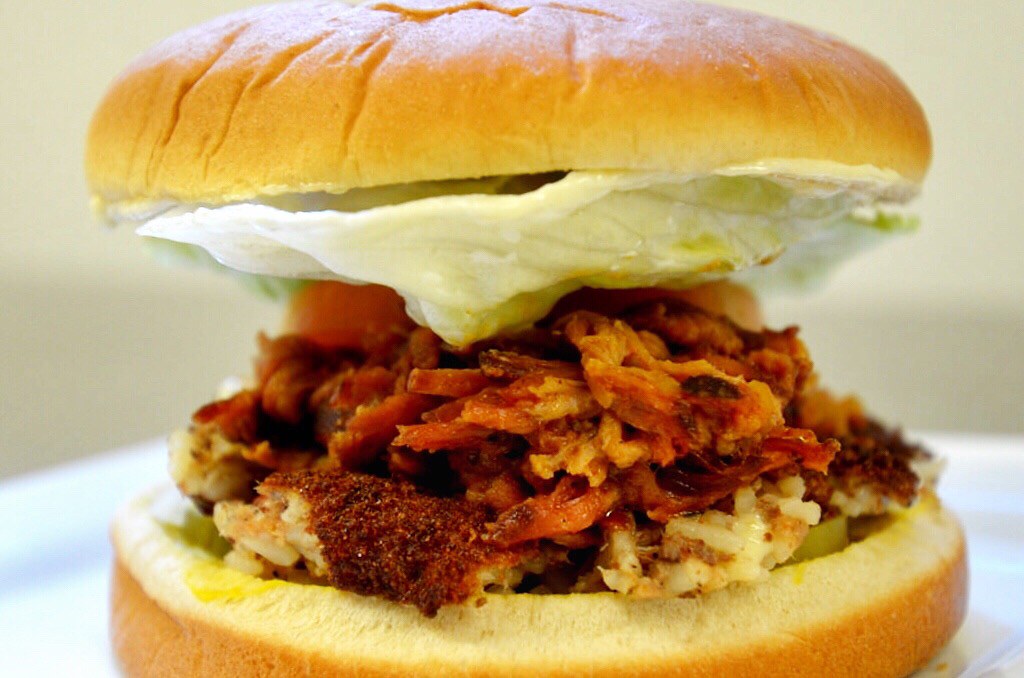 A third-generation cook, Jeff Benoit is best known for his boudin and cracklins, but it’s another item on the menu that’s perhaps the most unique. Like most great dishes it started by accident, but almost immediately the Gaudidaun sandwich/burger became one of the most popular items on the menu. Made with pulled pork Tasso or brisket and a smashed boudin ball that is then dressed like a normal hamburger, this impressive bite may seem odd at first, but it’s the perfection combination of everything I love about food in Southwest Louisiana. 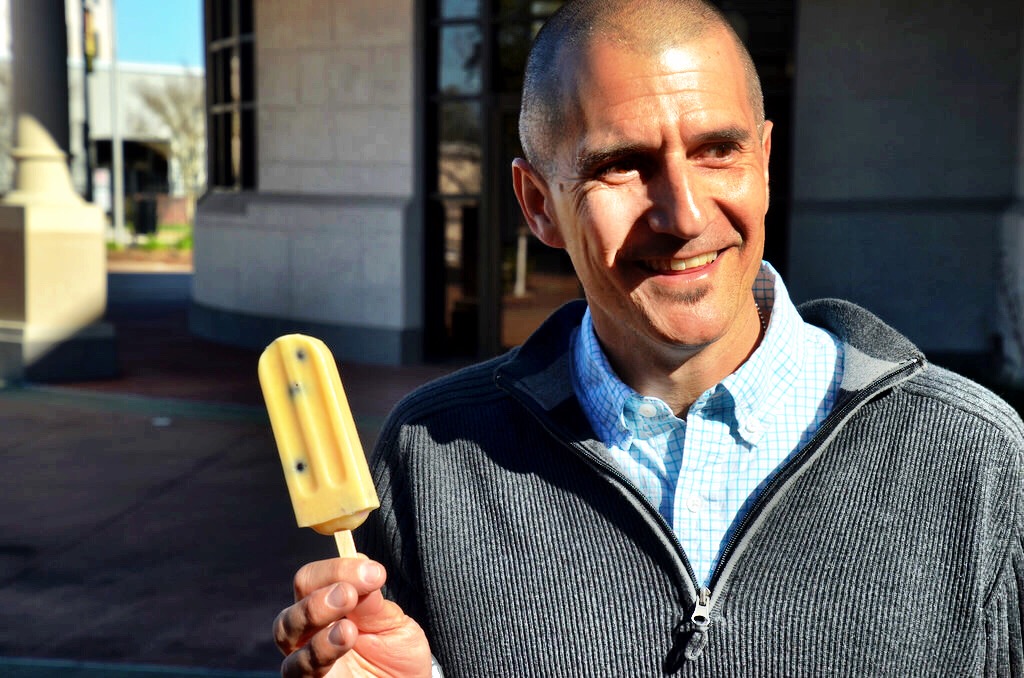 The last thing I expected to find in Lake Charles were gourmet ice pops with an 80s music theme, and yet that’s exactly what I found myself enjoying one afternoon along with company co-founder Robbie Austin. An artist by trade, he and business partner Nick Villaume fell sideways into creating Pops and Rockets, much to Robbie’s chagrin. A huge fan of 80s hits, Robbie inspired the unique names and ultimately flavors of these delicious treats that they now sell in farmer’s markets around the area. Some of my favorite pops were the: 99 Red Doubloons (Virgin strawberry pina colada), Chicory & Ivory (Chicory coffee and sweet cream), Karma Chamelon (Watermelon mint) and Pudding on the Ritz (Creamy banana). Their most popular flavor though is Work Up made with lemonade and gummy worms and for me personally, the star of the show was their King Cake inspired pop made just for Mardi Gras. This is a new company, but they’re bound to explode thanks not only to their creative names, but the delicious flavor combinations. 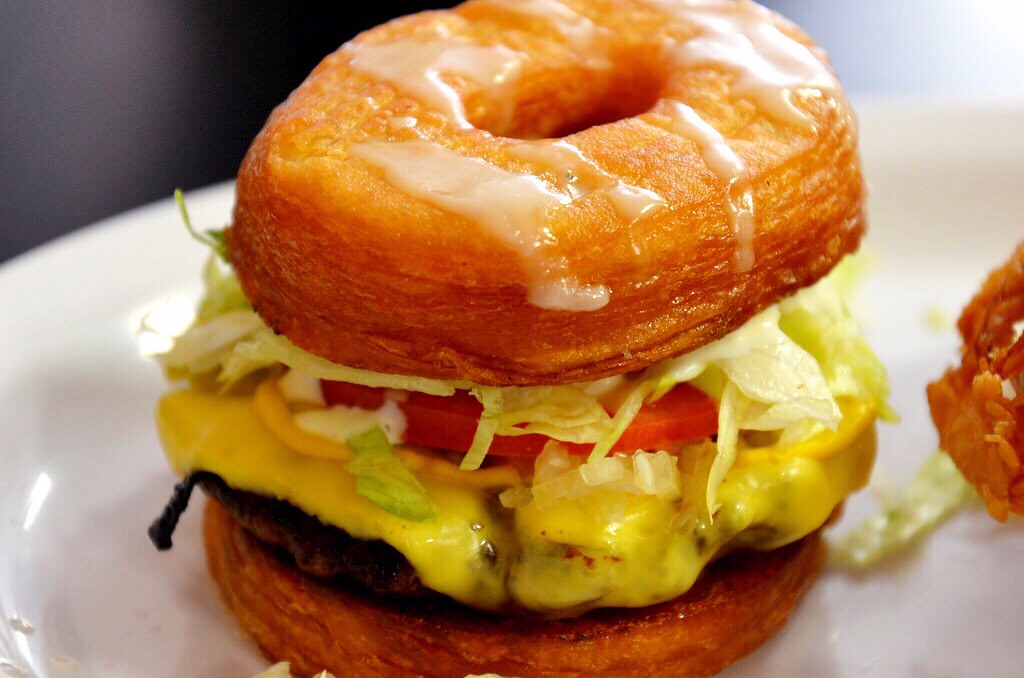 Cotten’s Downtown is a classic diner, down to the stools and Formica tables. The menu isn’t complicated but it doesn’t have to be, this is where you go to get that comfort food you’ve been craving. At the bottom of their menu though is a curious note – “Ask us about our specialty burgers,” – and so I did, which is how I wound up ordering a donut burger. I had heard of these mysterious concoctions before, but never had the chance to actually order one so throwing caution to the wind I went for it and asked for their version of this sweet and savory combination. The resulting dish is exactly what it sounds like, a cheeseburger with all the fixings served on a sliced, grilled and lightly glazed donut. Served with delicious onion straws, it looked pretty but I still wasn’t sold. The first bite was a strange one, the mix of donut and mustard not normally what my taste buds are used to, but by the end of the lunch I sat back content. While not something I’d order every visit, it’s definitely unusual and a hallmark of this quirky diner in downtown Lake Charles. 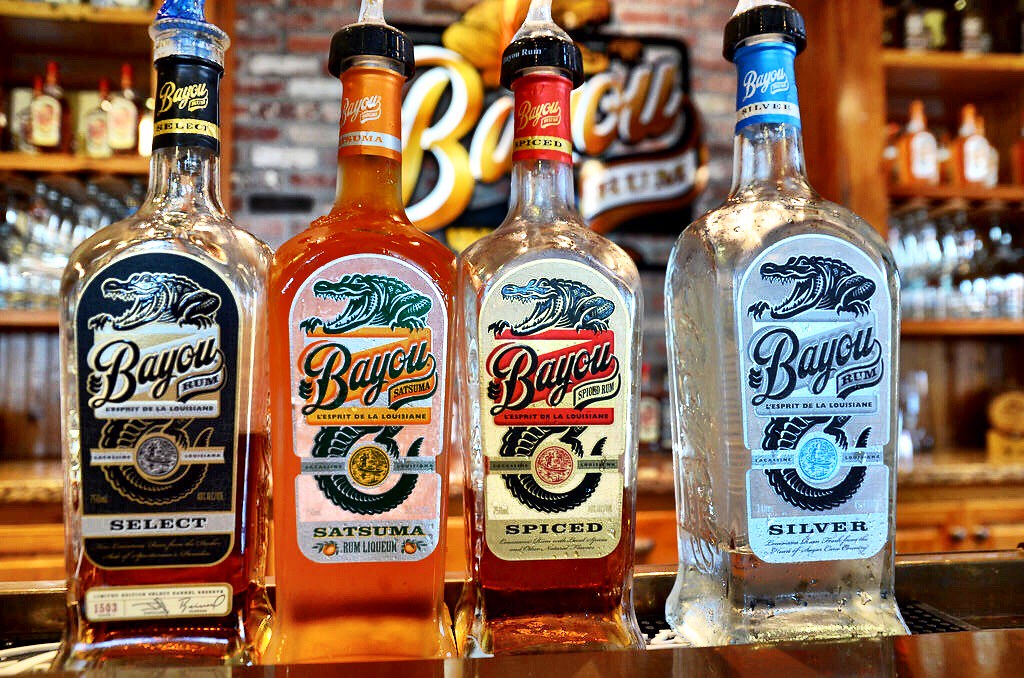 In Southwest Louisiana, sugar is king and so it just makes sense that a rum distiller would eventually open up shop in the area. Only a few years old, Bayou Rum has already made a name for itself in the spirits world only using ingredients from their native Louisiana. Producing four different rums, from their Select to the flavorful Spiced, Bayou Rum has erupted out of the gates at full speed. Just outside Lake Charles they’ve built a large facility to welcome visitors who can tour the distillery, learn more about the rum and its history and of course taste the different versions. It’s not what one necessarily expects from the region, but makes for a nice addition to any foodie tour of Lake Charles. 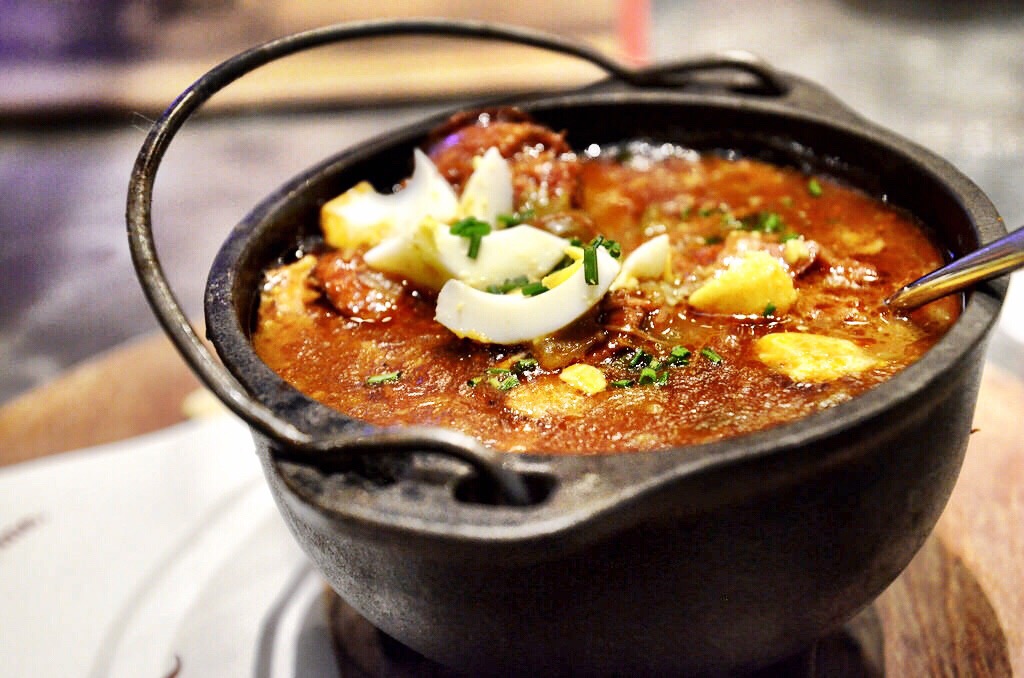 I was dubious at first when I saw the name of the restaurant – the Jack Daniel’s Bar & Grill at the large L’Auberge casino in Lake Charles. But in keeping with the theme of my stay at the hotel-casino, I was once again pleasantly surprised by what I discovered. Chef Lyle Broussard is a homegrown chef, and keeps his heritage in mind when creating locally inspired dishes for the restaurant. There’s nothing generic about the offerings here, each dish is created by Chef Broussard and features specials almost every day. Bacon & Smoked Cheddar Tots, Gator Bites, Duck Sausage Gumbo and a Pimento Cheese Bacon Jam Jack Burger are just a few of the many locally inspired and incredibly delicious items featured at the Grill. So set your preconceptions aside and be sure to eat here at least once during your stay in town. 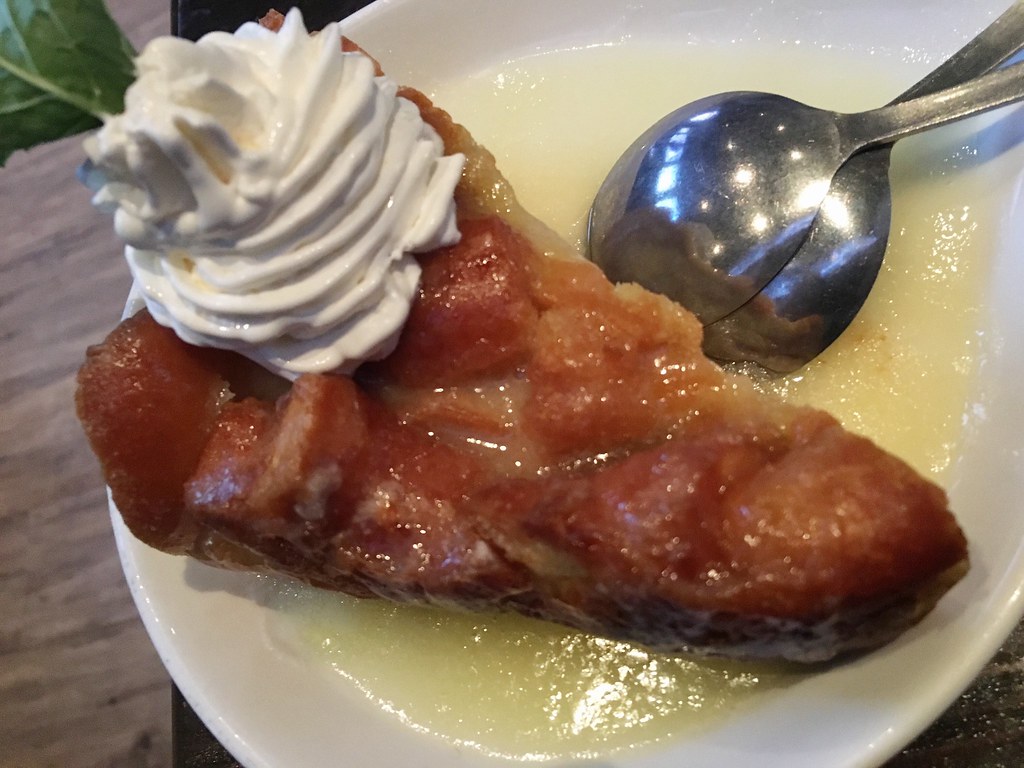 I love donuts and I love bread pudding, so when I first heard about the Krispy Kreme Bread Pudding at Walk-Ons Bistreaux & Bar there was no stopping me, no matter how much I had consumed that day. To be clear, Walk-Ons is a sports bar with a few locations in Southwestern Louisiana, but like so many others, they try to infuse local favorites into their menu whenever possible. I was there, however, with one goal in mind, and that was to sample this famous bread pudding. Baked using fresh Krispy Kreme donuts, it’s no surprise that it’s one of the most popular items on their menu. At first glance it looked like a normal bread pudding, served with a dollop of cream, but after my first bite I knew it was anything but standard. The sweetness of the donuts rung through loud and clear and I was immediately thankful I was sharing the dish with someone else – there’s no way one person could handle the sweetness alone. This is not an every day dessert, but when you see Krispy Kreme bread pudding on the menu, you always have to try it.

6 thoughts on “The Foodie Side of Lake Charles, La. in 8 Surprising Bites”