Traveling to Egypt was the culmination of decades of wanderlust. I remember as a kid pouring over images from National Geographic of the legendary treasures of King Tutankhamen and the mighty pyramids of Giza. Egypt seemed like the quintessential “other.” A place I would never get to see in person, relegated to living vicariously through the pages of intrepid adventurers. Then I found myself stepping through the pages of those books and magazines when I began my own journey around the Land of Pharaohs – Egypt. I expected to learn a lot during my time in the country, but I didn’t necessarily expect to be as impressed by the physical beauty of everything around me as I was. Whether it was standing in front of the mysterious Sphinx, enjoying a simple meal with newfound friends or meeting some of the kindest people I’ve ever encountered, I found beauty everywhere including in these special moments and photos that for me encapsulate the Egyptian travel experience.

Cairo is an ancient city, and in its Old City you can see evidence of past centuries around every corner. In one section sits some of the oldest mosques, synagogues and Christian churches on the African continent, a marvelous reminder that at one time different faiths coexisted somewhat peacefully. It was the church that caught my attention though, the ancient Saint Virgin Mary’s Coptic Orthodox Church also known as the Hanging Church. It’s called that because it sits above a Roman fortress and literally hangs over a passageway. Dating back to the 3rd century, the church is a glimpse into early Christian life that is hard to find anywhere else in the world today. 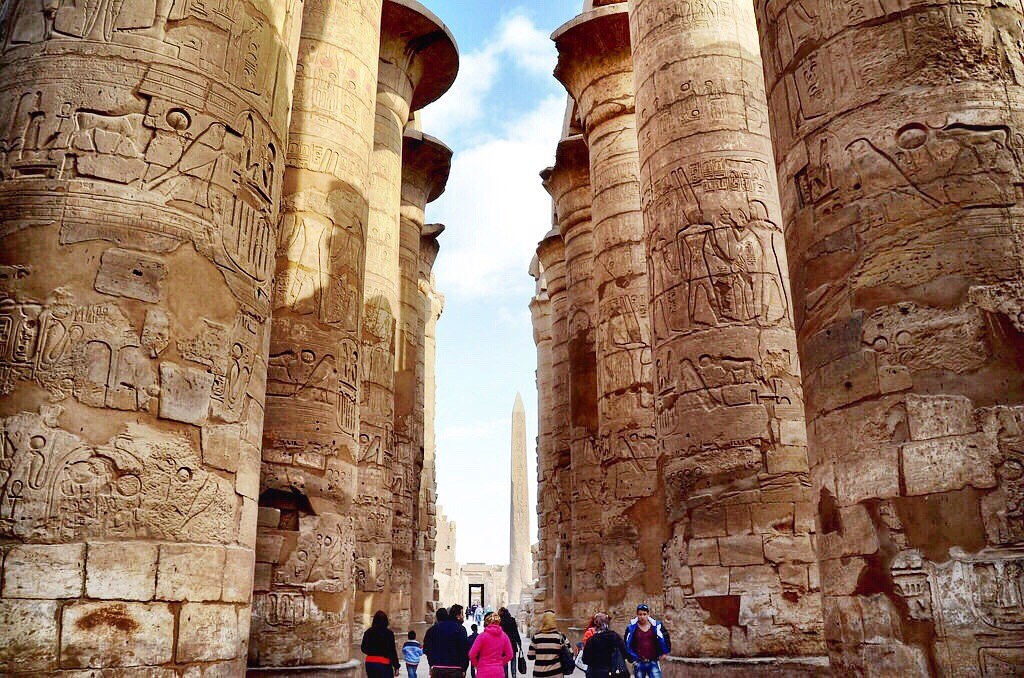 My first experience with an ancient Egyptian site was also one of the most impressive – Karnak. This collection of temples and chapels that was the most important of its time. Walking down the avenue of the sphinxes and past two giant stone sentries, I could easily imagine what life was like here 3,000 years ago. That’s the best part of visiting these ancient places, to try to connect with a people so ancient that it boggles the mind. 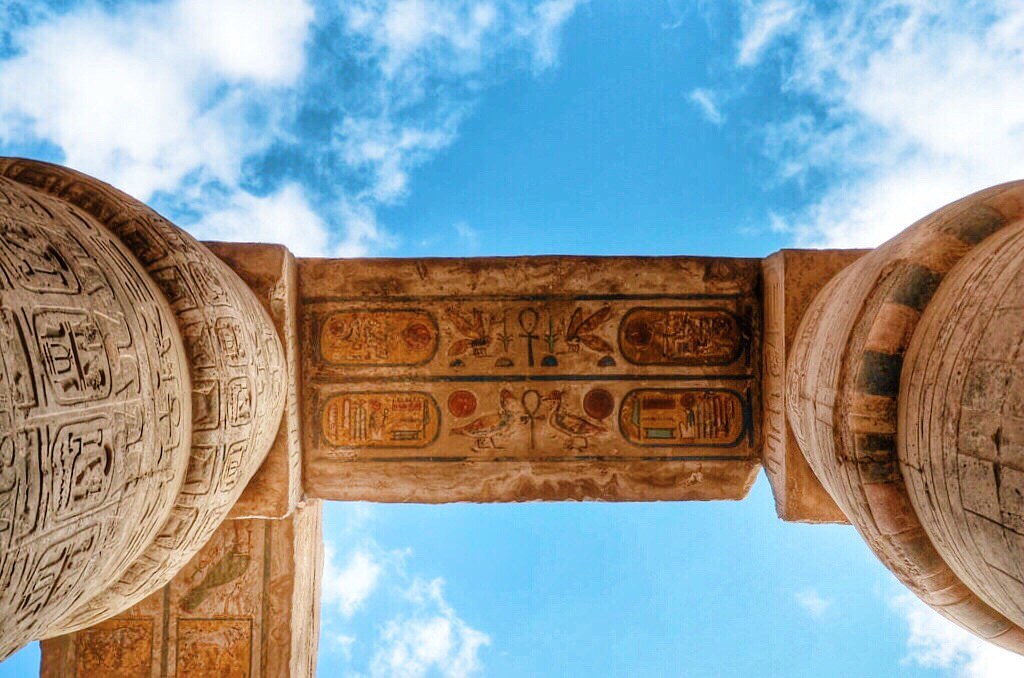 One of my favorite moments exploring the Karnak complex was as I walked into the labyrinthine Great Hypostyle Hall – Karnak’s most recognizable monument. The massive hall once had a roof that while now gone, was supported by the 134 columns in 16 rows still found there today. When it was built the entire area was richly decorated, and the vibrant colors must have been a wonder to behold in a part of the world where browns are the normal colors of daily life. You can see these colors still both on the columns and the lintels hanging high overhead. Not for the first or last time I stood there, looking up with jaw agape and wondered how, how after millennia of wear and tear and eventual entombment by sand that standing there in the 21st century I could still see the colors of the artwork just as if they were painted yesterday. 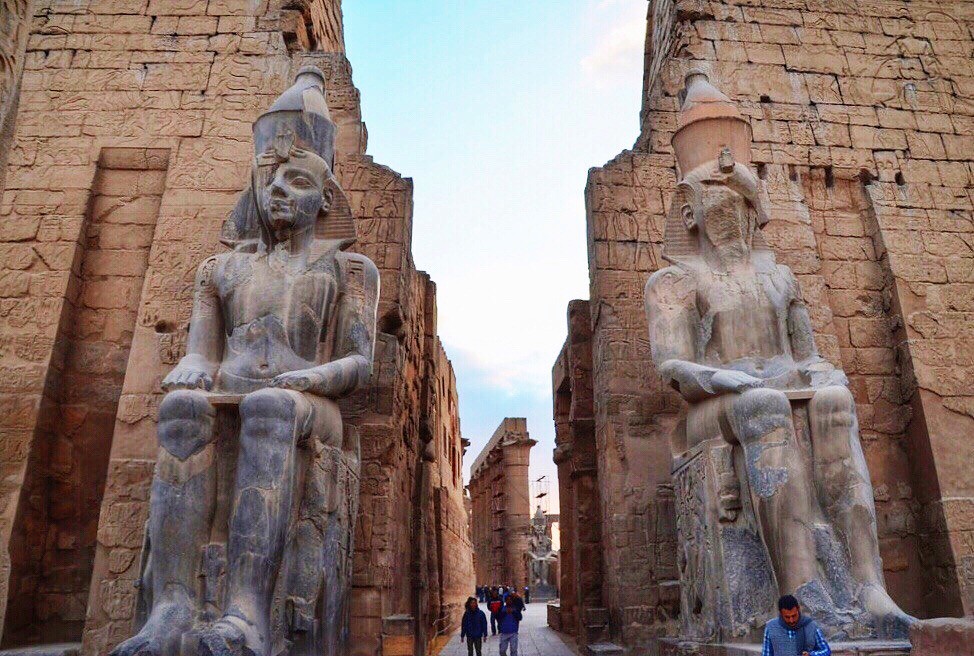 Not far from Karnak is another recognizable monument to the past, Luxor. Instead of finding yourself in some far flung and lonely place, the temple is in the middle of the present day city of Luxor, what was once known as Thebes. The ancient Egyptians never missed an opportunity to impress and the entrance to Luxor is just as dramatic, maybe more so, than at Karnak with giant figures and obelisks flanking the entrance. Another example of how Egyptology has amazed us as a people for generations, one of the smaller obelisks that used to sit here is now in another famous spot – the Place de la Concorde in Paris. 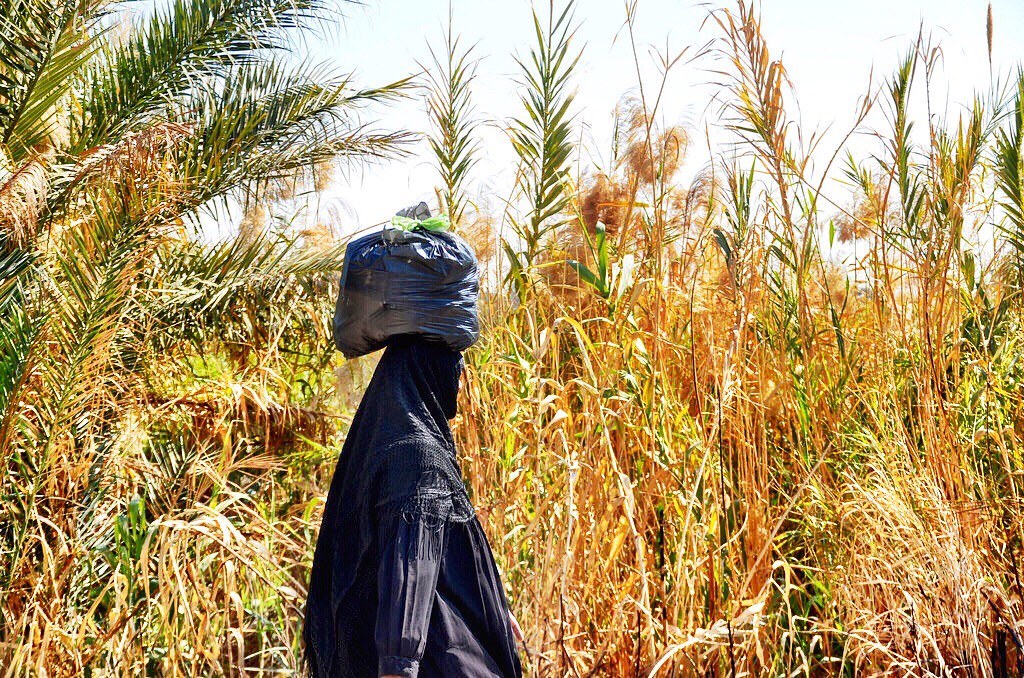 Life along the lush Nile River hasn’t changed a lot over the generations. Families still depend on the mighty river for nearly all aspects of life, and cruising down the Nile towards Aswan passengers get a rare glimpse into a different side of Egypt. Gone are the crowds and the temples and in their place the ebb and flow of daily living, local residents going about their business and doing the best that they can even in the hard times affecting so many in Egypt today. 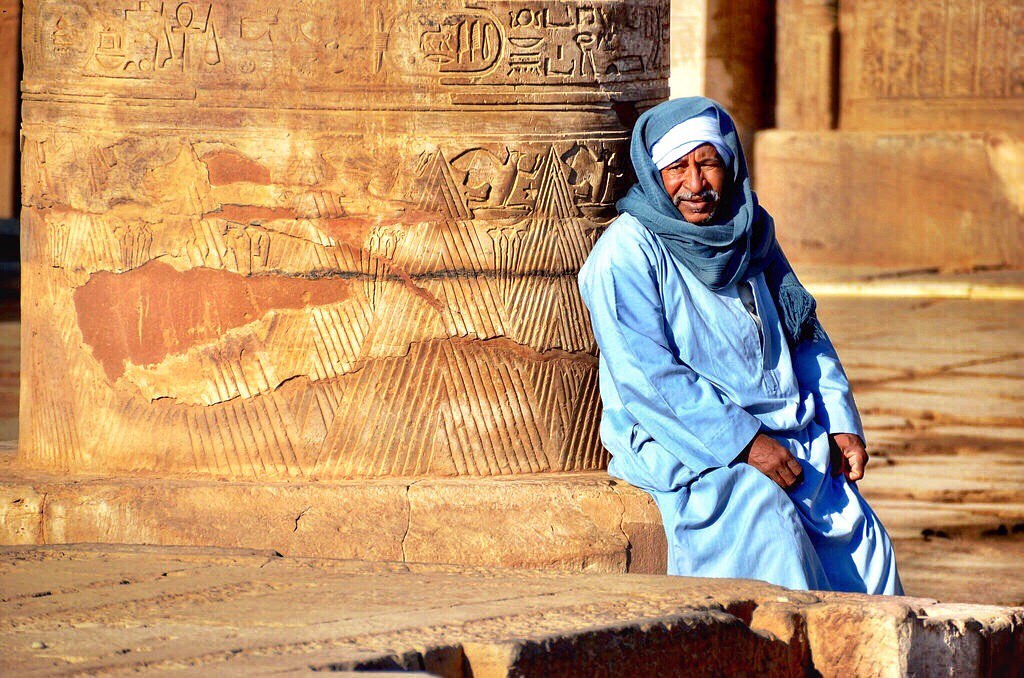 A constant fixture at all of the Egyptian sites open for tourism are local residents, there to sell something a little unusual – themselves. Dressed in traditional attire, they appear to be what many of us conceive Egyptians to look like and so they stand inside these famous monuments, waiting for tourists to take their photos. Usually infirmed or retired, this is a good way for them to make some extra income, and paying a few dollars to photograph them is just part of the process when visiting these sites. 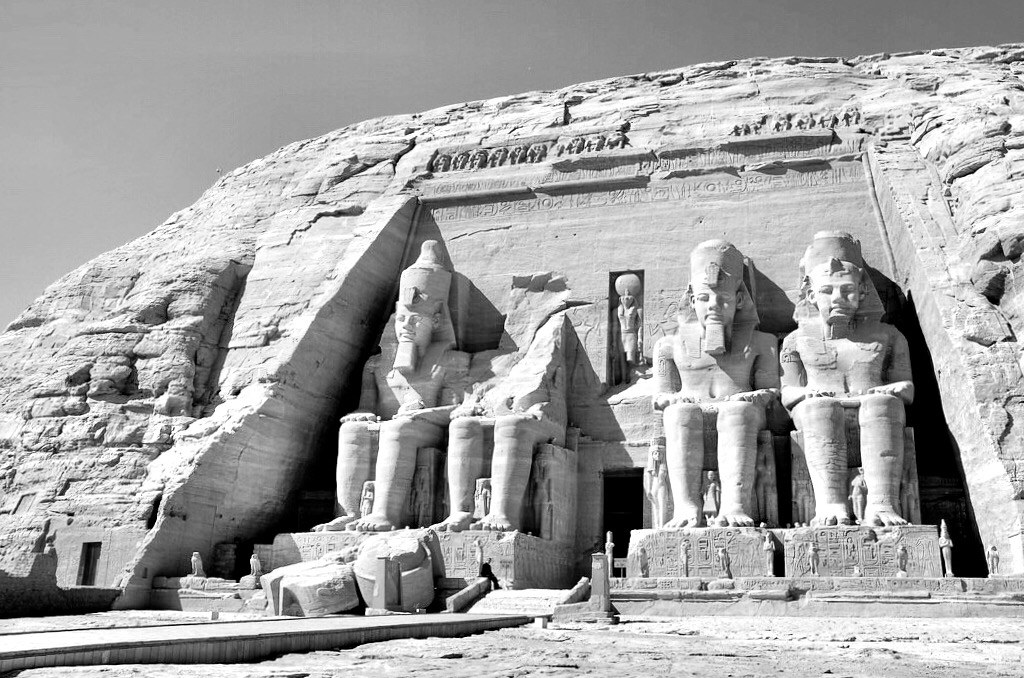 Abu Simbel, one of Egypt’s most famous archaeological sites was nearly destroyed just a few decades ago when waters from the new Aswan High Dam project threatened this and many other priceless treasures. The world community banded together in what was the first constructive act by UNESCO, eventually relocating this impressive temple built into a mountain and also launching the modern movement of protecting World Heritage Sites that are integral to understanding our shared human history. 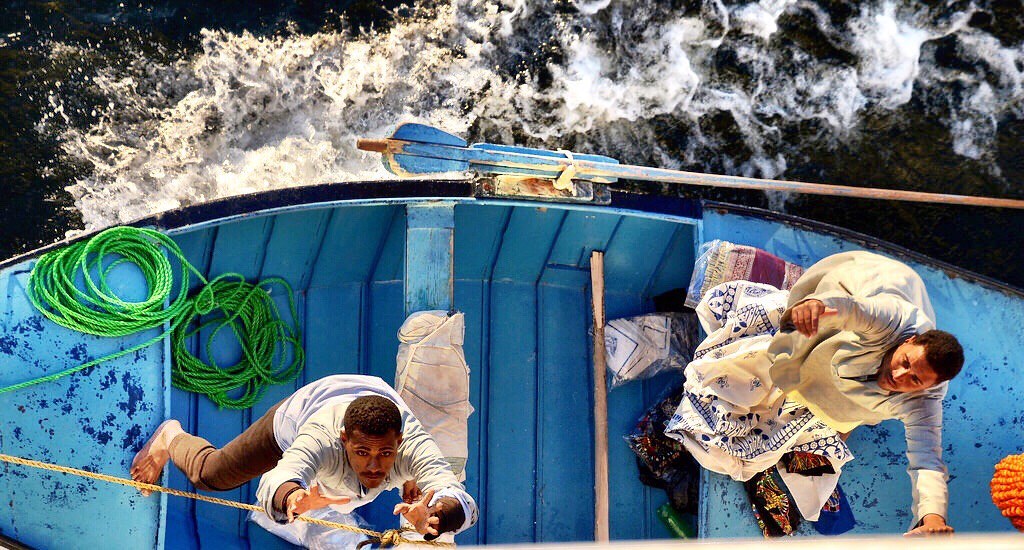 Hawkers are a common sight in Egypt, but one place I didn’t expect to find them was on the water. Pulling up along the river cruise ship, this entrepreneurial duo lashed themselves to the boat and started calling out to the passengers. Selling towels and traditional Egyptian clothes, they threw samples up to the top deck and if passengers liked the items, haggling commenced. Once a price was agreed to, the money was carefully thrown down to the boat below in a plastic bag. It was a fun and engaging way to get some shopping done and a moment I know I’ll never forget. 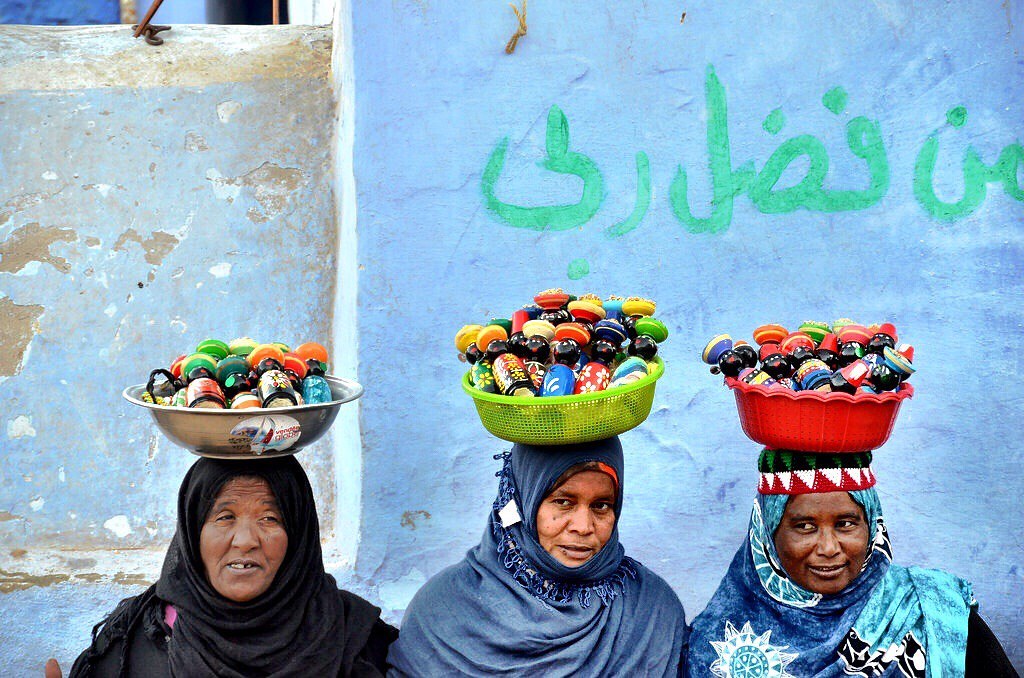 Before my trip to Egypt, I knew almost nothing about the Nubian people. The Nubians have called the lands of southern Egypt home since long before there was a modern Egypt. Originally from Sudan, they speak a different language, enjoy a different culture and even look different from the Egyptians around them. As a minority they also have a very long history of being oppressed, both benignly and actively. Their recent injuries came from the building of the Aswan High Dam in the 1960s and 70s, when entire riverside Nubian villages were swept away by the rush of the waters. Relocated by the government, they lost their centuries old connection with the land and as such, have been a people in flux for a long time. The additional loss of income from the downturn in tourism has made the Nubians a people on the brink of crisis. 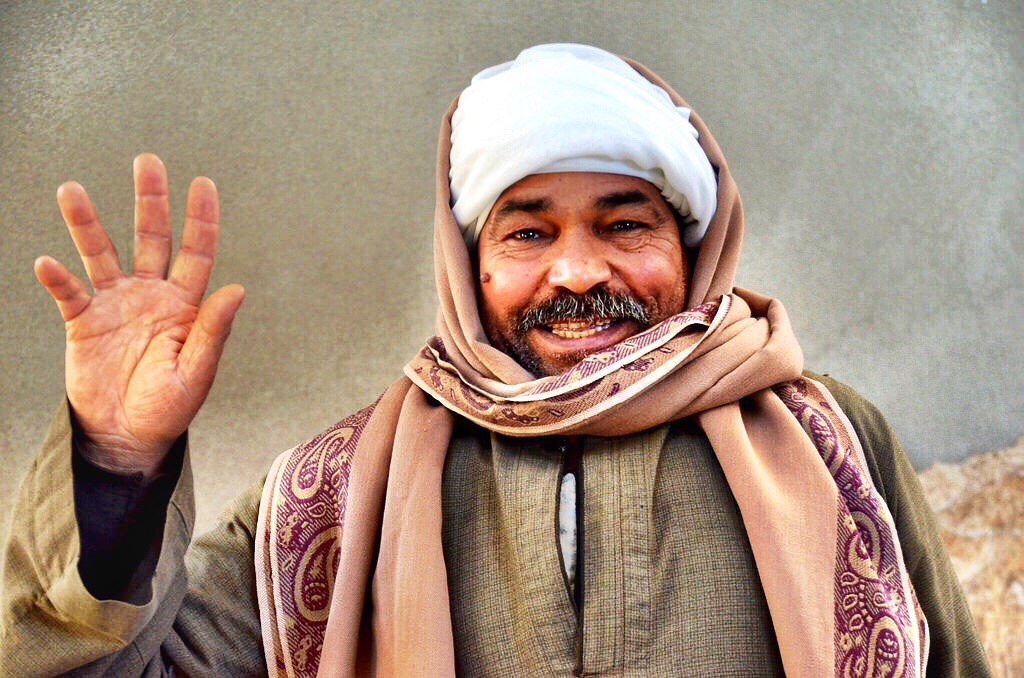 Meet Muhammad, a gentleman I met one morning while touring one of the many ancient Egyptian sites found on the outskirts of Cairo. I met a lot of people during my journey, but due to the political and economic climate of the country, most were distressed and deeply unhappy. Not Muhammad, no, instead looking into his twinkling eyes I saw something different from all the others – he seemed to be happy. His face told a story, a story of calmness and dignity. A story of joy even in the hardest of times and with that face comes a lesson, a lesson about maintaining our own sense of self no matter where we find ourselves in life.

Finally standing in front of those mighty pyramids on the Giza plateau was the culmination of decades of dreaming, of yearning to see them in person. Photos can never do justice to the real experience of actually being in a place, all of the senses heightened to capture every moment of the experience. It was then that I finally understood why these almost mythical structures have so long captured the imagination of man. Simply said, they are extraordinary and there really is nothing like them made by man on earth. 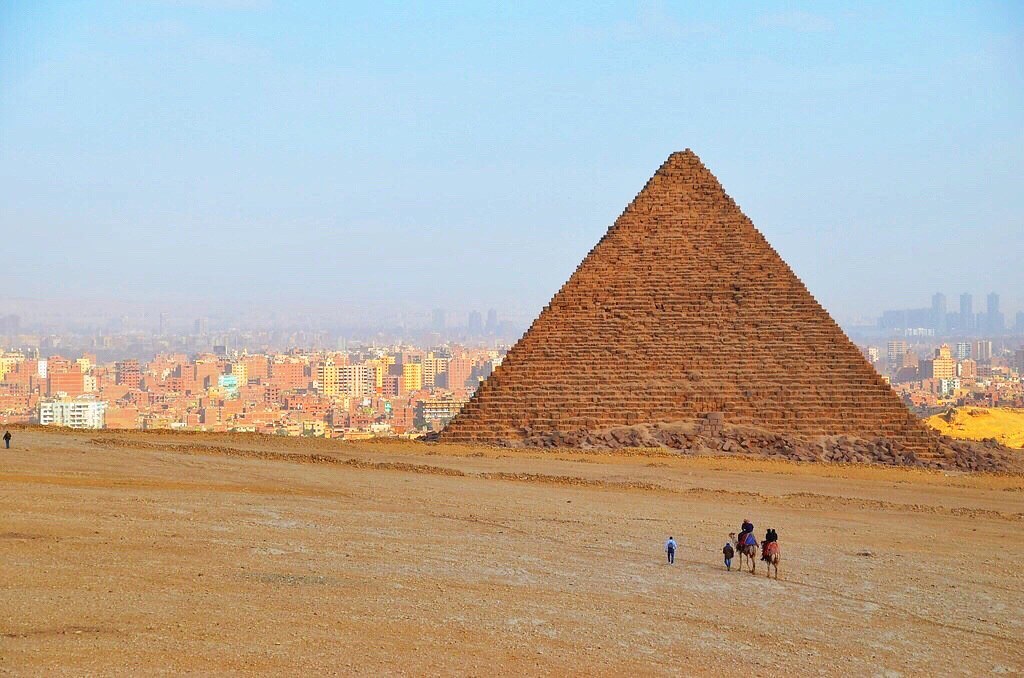 Last year someone told me they were disappointed when they learned that the Great Pyramids were in fact very close to Cairo and not in the middle of a desert somewhere. That statement still confuses me – why would they be disappointed? The pyramids are amazing no matter where they are and it would have taken all of five minutes of research to learn that they are located on the Giza plateau next to Cairo. But that’s a great example of how easy it is for all of us to be disappointed when we travel. Instead of marveling and feeling humbled at one of man’s greatest engineering feats, she was more concerned with the trappings surrounding them. We should all take a moment to remind ourselves how lucky we are when we travel. 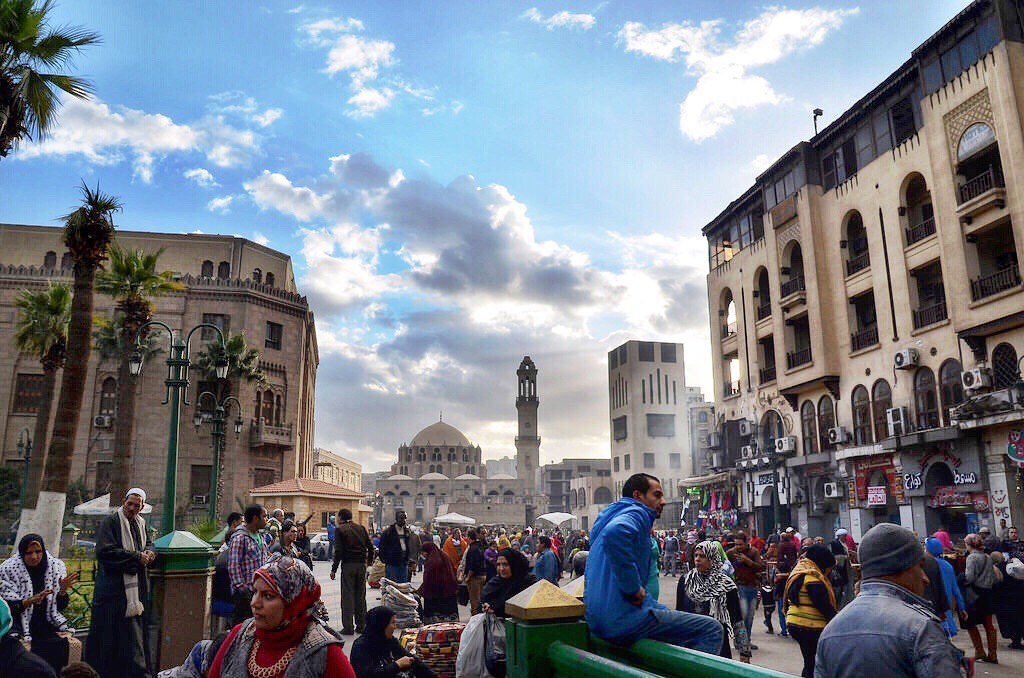 My trip started out in chaos and it ended that way, when I decided to visit the impossibly large and always crazed Khan el-Khalili souk. One of the largest marketplaces in Cairo, I visited on a Friday afternoon, which only accentuated the chaos as Cairo residents were out and about enjoying the first day of their weekend. Walking along the streets of the souks, hundreds of vendors and shops were lined up on both sides, eager to sell me something, anything. Sure, it’s a major tourist site but it’s also an important place for locals who go out to either just revel in the atmosphere or actually get some shopping done. Looking around, I was in fact one of just a few tourists in the mass of people swarming the souk, making me feel like I was offered a glimpse into another side of life. I bought some warm, fresh baked bread as a snack and just meandered. I didn’t buy anything, much to chagrin of the vendors, but I did have a wonderful afternoon just absorbing this aspect of the city. It really was the perfect way to end my stay in Cairo, a certain metaphysical balance to finding beauty and order in what at first seems like a chaotic mess. But that’s why so many love this enigmatic city, for its unique ability to charm and bewilder simultaneously.

4 thoughts on “Perceptions of Egypt in 13 Photos”